Those Top 20 Pokémon lists to celebrate the series’ anniversary were pretty cool, weren’t they? So, seeing as Shin Megami Tensei IV Apocalypse’s (American) release date is nearly upon you, I thought I’d do something along the same lines for the demons of the SMT franchise.

Turns out this didn’t go as smoothly as I had anticipated. In case you’re unaware, the Megami Tensei series began about 19 years ago (the games did, anyway) and over the span of its almost two decade old existence many spin-offs and interpretations of the style, themes and, of course, the demons the series is known for.

And seeing as there are many of said demons got one or more redesigns over the years – be it by SMT’s mainstay Kazuma Kaneko or various guest artists – I decided to only pick those that were seen in the mainline entries or its ‘closest’ spin-offs, like Devil Survivor and Persona (although I decided that I would not pick any Persona-specific reimaginings).

With that out of the way, here are my Top 10 Favorite Shin Megami Tensei Demon Designs! 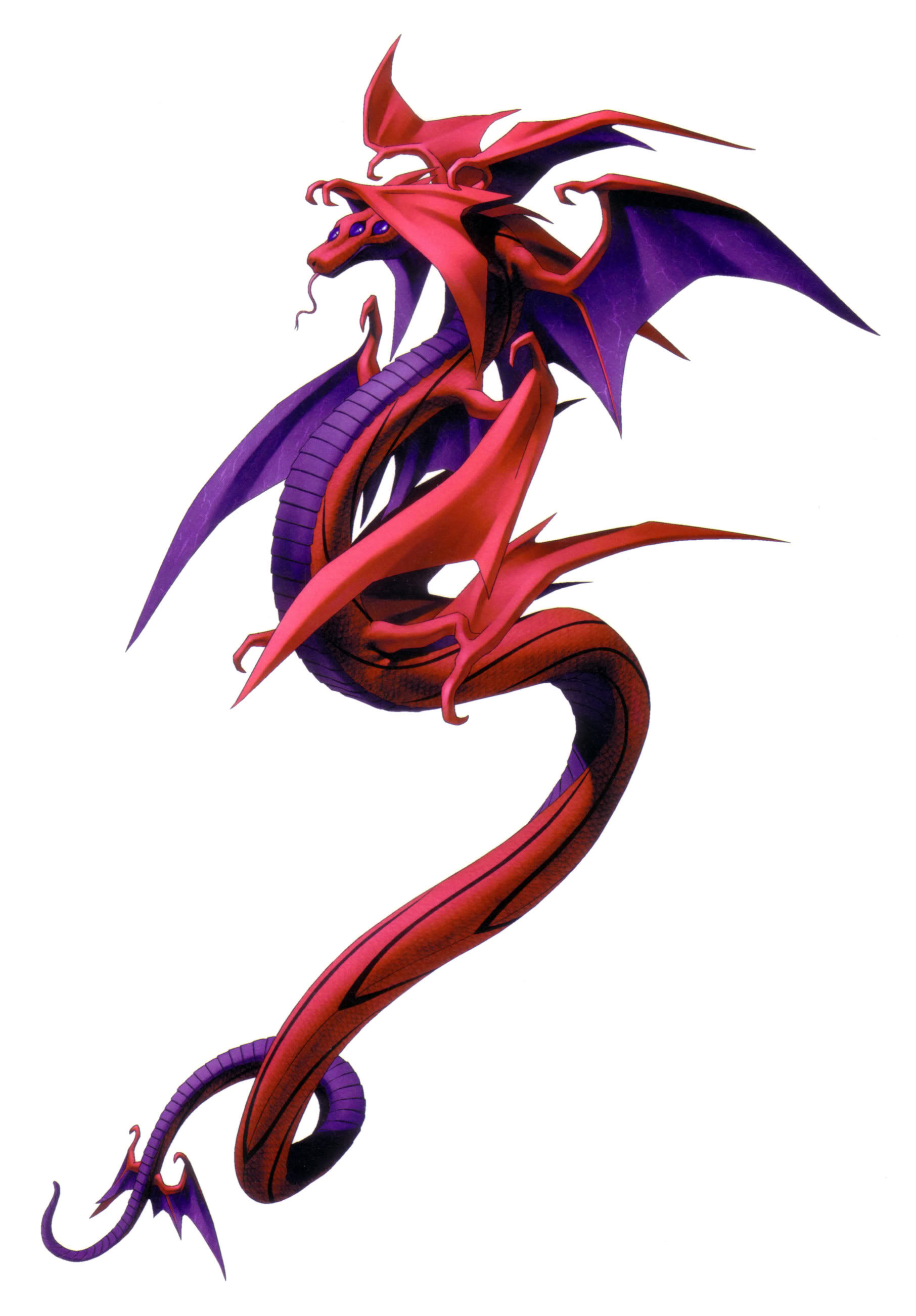 For dragons to be featured as a symbol of awesomeness and badass-ery is as typical as they come. So here is mine! This powerful, slick, flying snake is, according to the Megami Tensei wikia (my main source for these quotations, thank you very much) “an archangel in Talmudic lore” and “has been known as the seducer, destroyer, accuser”. So it’s also an angel of seduction. Neat.

Despite some demons’ levels varying from game to game, Samael’s usually an indicator that you’re entering late-game territory. No surprise then that what really cemented my appreciation for it was getting my ass poisoned to hell and back in Digital Devil Saga and wanting one in my team. Which is to be expected, considering I could compose a team of Poison-type Pokémon with only creatures I actually like. This all fits rather nicely seeing as ‘Samael’ means “Poison of God”, and we all know God has the sickest spit.

One last important note is that “In The Holy Kabbalah, Samael (…) took Lilith as his bride…” This will be relevant later so keep it mind. Oh, and “He was also said to have mated with several of the angels of prostitution.” Once again, the OG angel pimp. 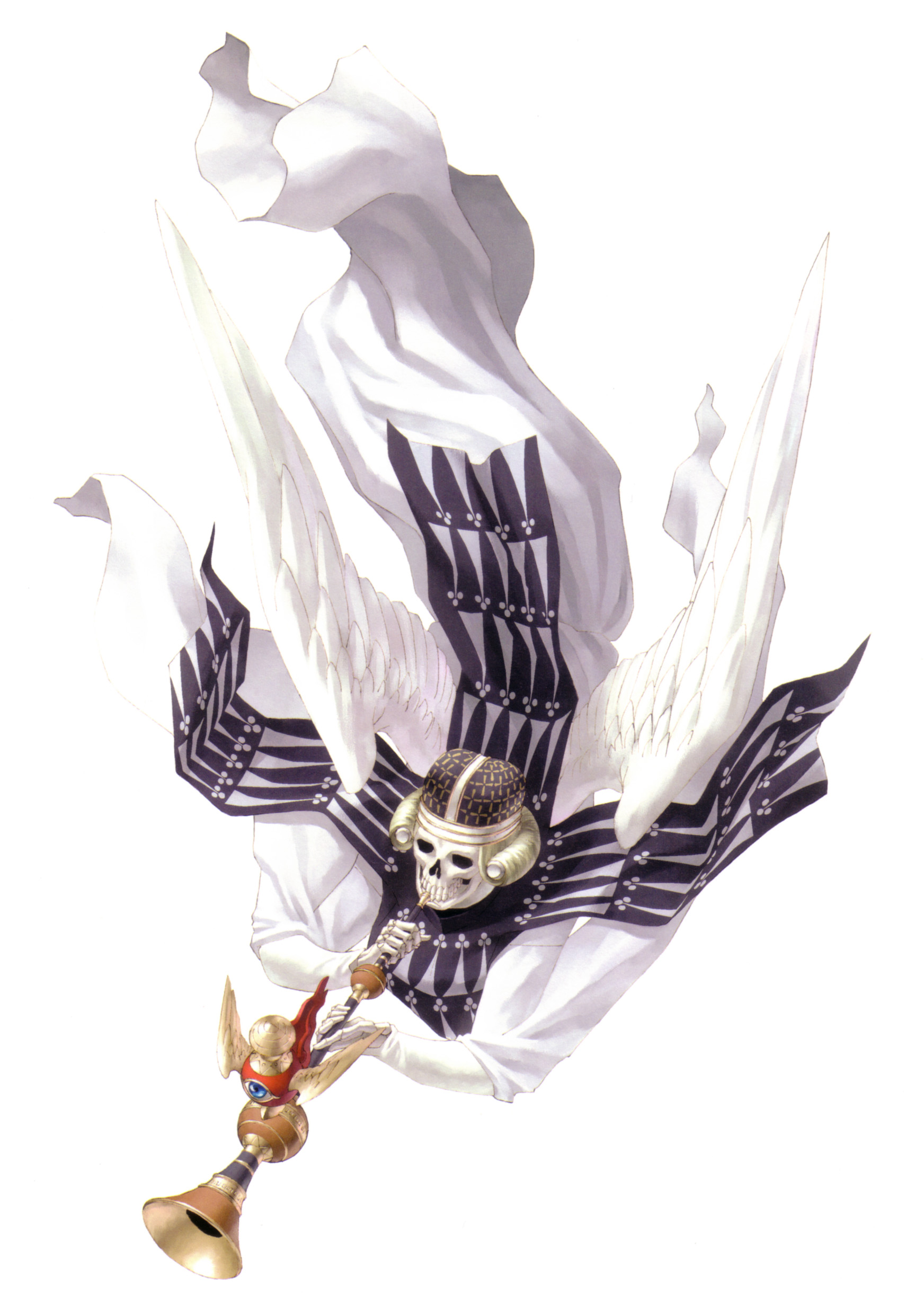 Speaking of late-game indicators, none represents to me that I’m ready to take on anything that the game has to offer quite like the Trumpeter. It is the demon I envision whenever I think of the Megidolaon spell and whenever I use it in battle is like I’m telling my opponent “you done messed up now son!”

Its simplicity is pretty alluring to me, design-wise, as it is basically an angel with a skeleton for a face. But it’s that small touch and the context of how it is typically represented in the games that produces an image that truly signals the Apocalypse for whoever has to hear its almighty trumpet. 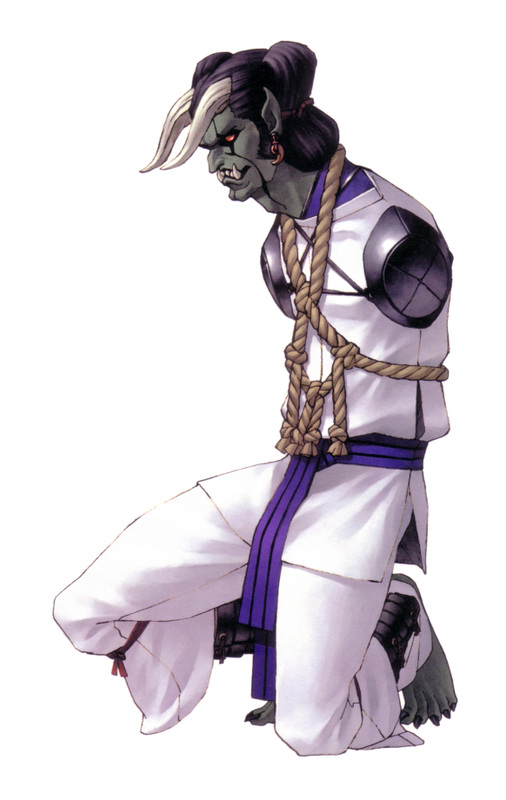 A demon I believe you won’t find featured in many of these kinds of lists, Take-Minakata to me is a like an unexpected badass, waiting for others to not take him seriously for not having both of its arms.

I find it a bit of a shame that in most games his levels tend to be between the high 10s and the high 20s. When I say Take-Minakata appear more frequently I was honestly expecting some version to have him appear in the high 50s but no such luck.

In any case, in my heart he’ll always be the underappreciated ass-kicker that he deserves to be. Even so, considering that after he got his arms chopped off and fled to Suwa he married a local goddess and became the guardian god of the place, maybe it was not such a rough deal. 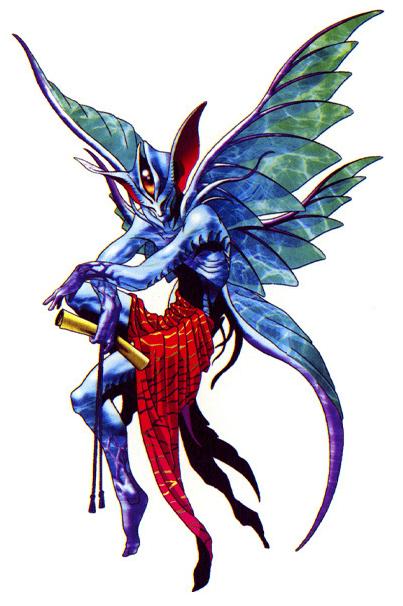 I can’t really tell you what manner of creature this is supposed to be. A really skinny dude with insect-like features and a curtain covering its junk? Yeah, nailed it.

Joke’s on me, I guess, because it’s another design which I find rather appealing. Maybe it’s the sort of serenity that the water coloring and shading transmits, or the beautiful design of its wings. Whatever it is, I want it to be in my party even if for a short period of time (those who have played any of these games know that there aren’t many demons that you get/should keep around for long).

According to Zoroastrianism, Sraosha is “one of the oldest and most ethical of the Yazatas (Beings Worthy of Worship), being the greatest one of them”. Seems I really know how to pick them. 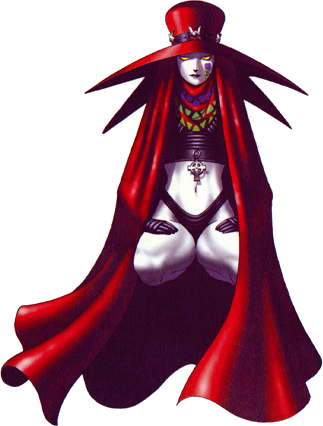 While she may not have as many design variations as some of the other demons on this list, I have some trouble understanding if I prefer the all-black getup or the red one.

Anyway, there’s not much to dwell on here – I simply think everything from the hat to the pose to the flower tattoo on her cheek looks really good – so I’ll leave you with a bit of trivia!

Scathach is closely related to another entity featured prominently in the SMT series – Cu Chulainn. Their relationship is more interesting (read: convoluted) than I had originally thought, so I’ll just relay to you that, after promising her daughter to Cu Chulainn, Scathach “grants [him] the "friendship of her thighs" (they have sex) when his training is almost complete”. Offering the friendship of one’s thighs is a pretty classy way to put it, to say the least.

Cu Chulainn also seems to have slept with Scathach’s rival, but that is still not enough to be on the same level as Samael. 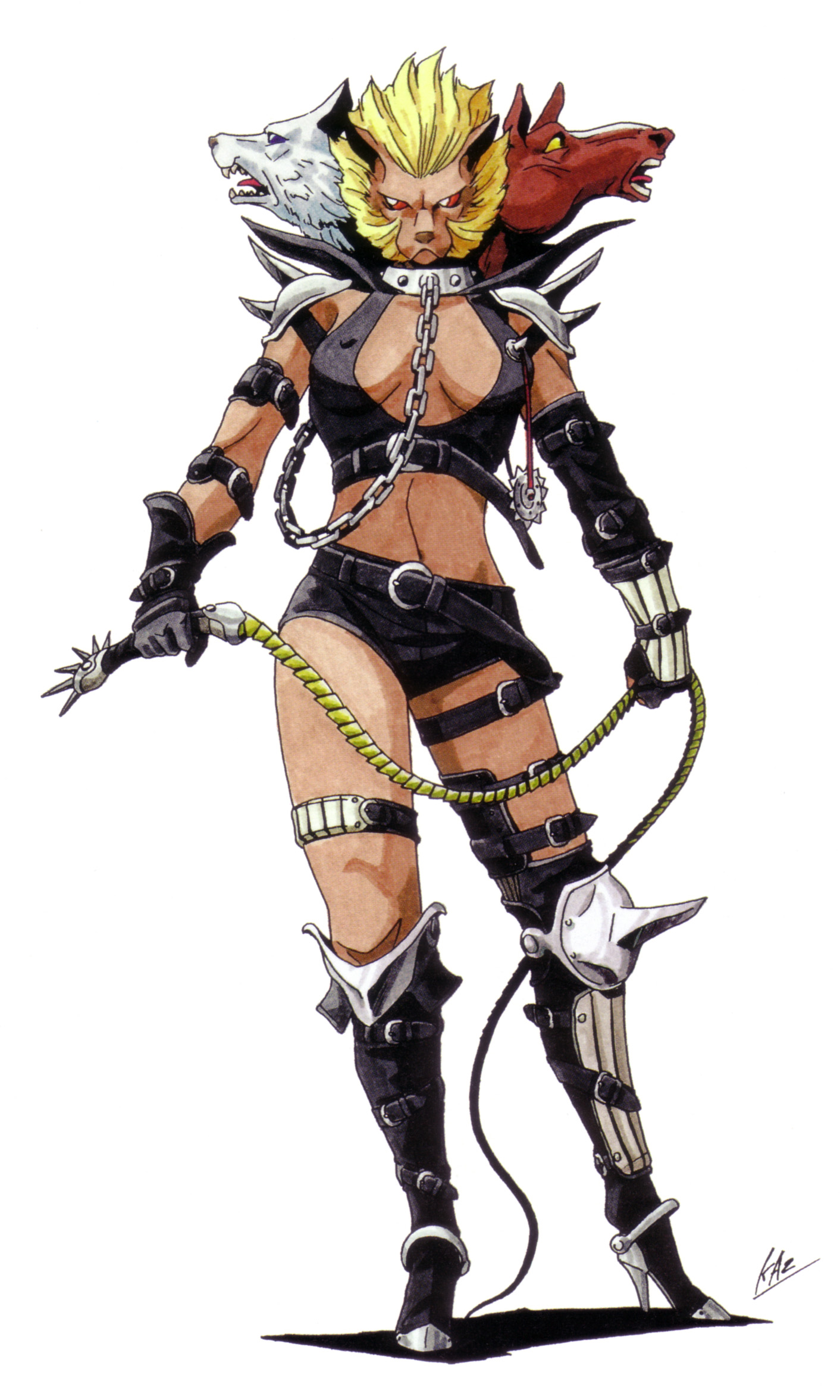 Like I already mentioned, due to the importance of demon fusion superseding the more traditional leveling up system as the most crucial mechanic, keeping demons in your party for a long time is not recommended. But Hecate looks so awesome that, sometimes, I find myself keeping her with a party of demons 20 levels higher just because she’s so damn boss. 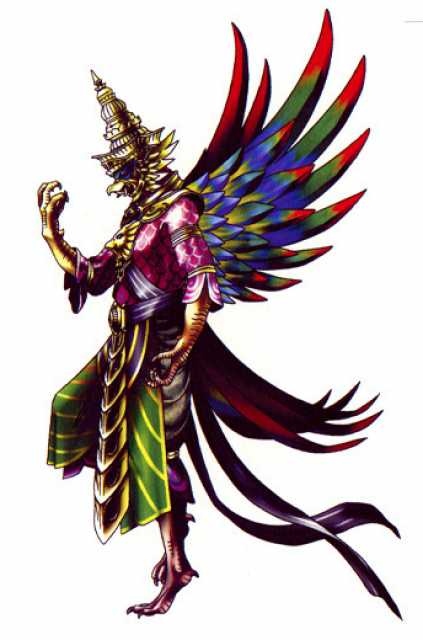 Many demons have been under really dramatic changes over the years, meaning  that it’s easier to figure out if you feel one is more appealing than another. In Garuda’s case it as mainly to do with its pose.

The design which appears in Nocturne and Persona 3 and 4 may be the more well-known one (even if only by the virtue of being in those more popular entries) but the picture above is mainly featured in the Devil Survivor games and in SMT IV.

The main difference to me is that the first one seems just like a pissed-off bird with a crown, while the one I chose transmits more dignity and power. From the detail of the hand to the wings on the back, as far as I’m concerned it all flows really well. 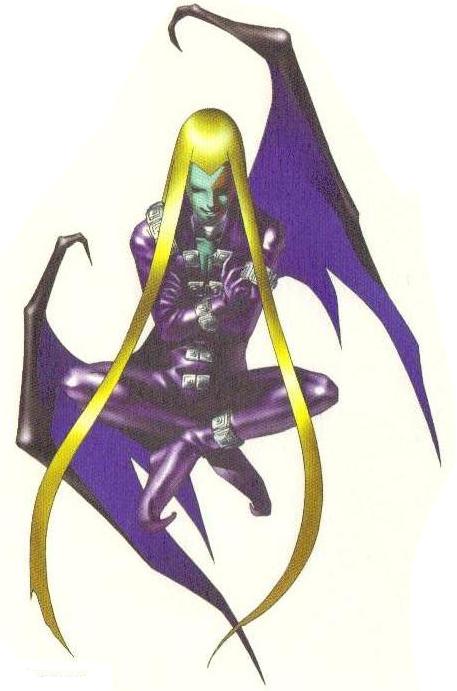 Entering the Top 3, here’s a demon who is of the utmost importance in the overall Megami Tensei mythos, serving as a primary and then secondary antagonist in the first games. After the Shin was added he saw his stock fall a bit, but now and again he pops up again to cause the mischief he’s so well known for.

Going through some rather ‘meh’ if not straight up uninspired designs, the most recent incarnation of this Norse god hits all the right notes. The colors, the purple one-piece suit – the go-to color for tricksters, it seems – and those crooked wings that, somehow, manage a pretty intricate balance with the crossed legs.

And who can say no to that most wicked of smiles? 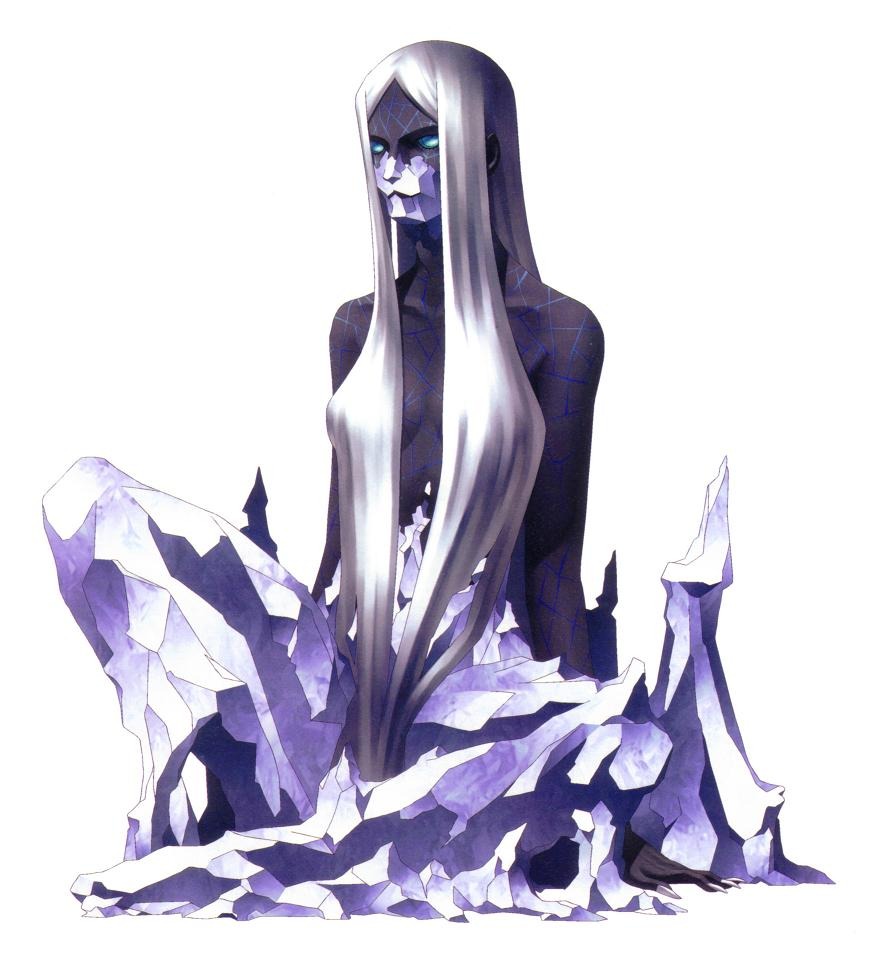 Going from the father to the daughter, I’m beginning to realize some kind of pattern in what pertains to frozen features in characters (see: the Silent Hill Shattered Memories box art).

Besides that what appeals most to me in this design is the whole mouth area, that seems cuter than maybe it was intended, and the line pattern on the whole body. And sure, the flowing hair covering the chest also adds to it. 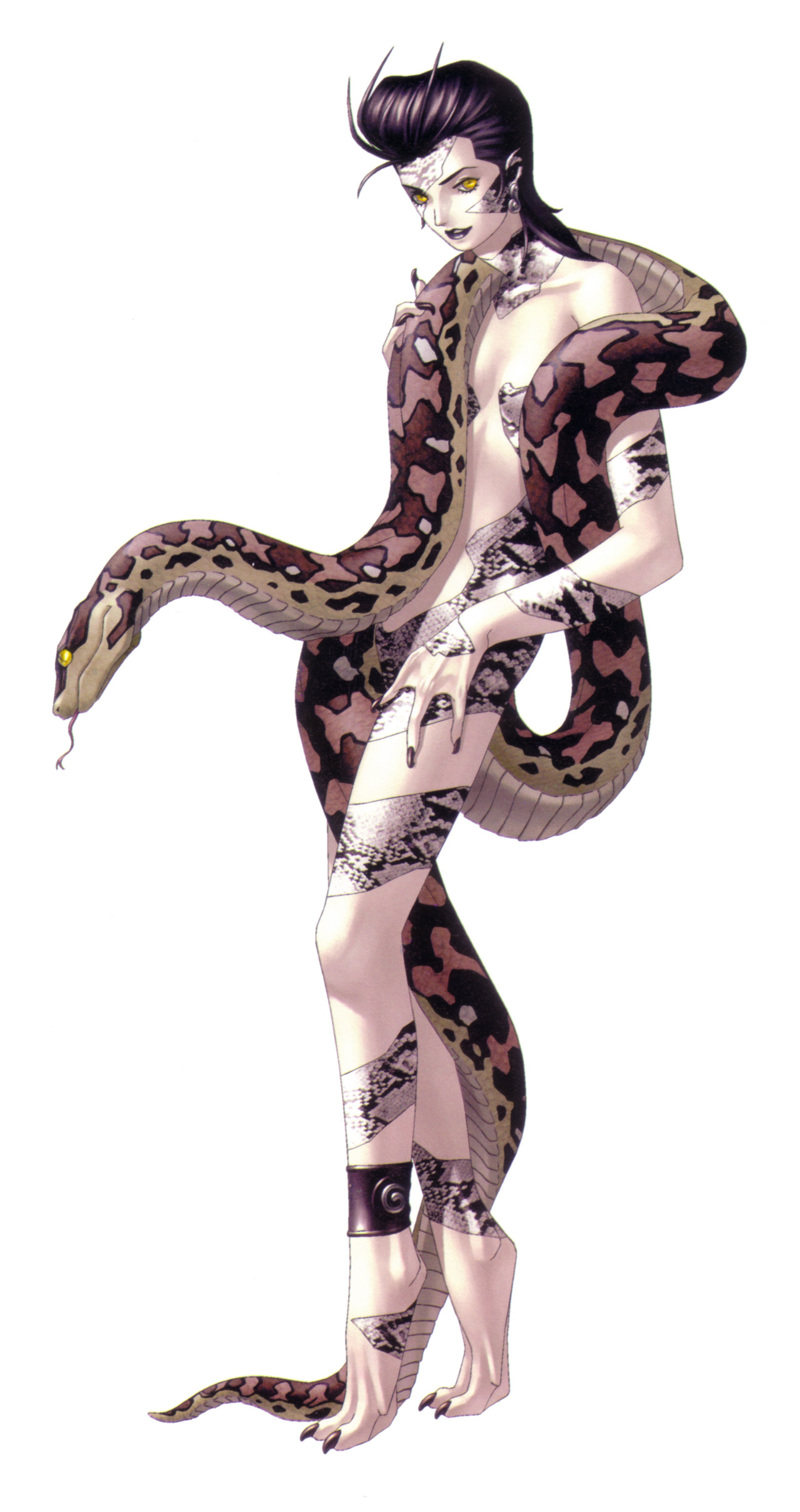 As I see it, there’s no other demon for whom every single design is so strong and so absolutely spot-on. It’s no wonder, seeing as Lilith is typically portrayed as a pretty important character in many of the games.

Despite the version seen in Nocturne being phenomenal, what Keita Amemiya did with her design and the way it relates to the narrative, like its parallels with the Archangels, is simply outstanding. The more I look at it the more it certain I am of how much I love said design.

That’s how much more of a pimp Samael is, by association.

How about some honorable mentions? 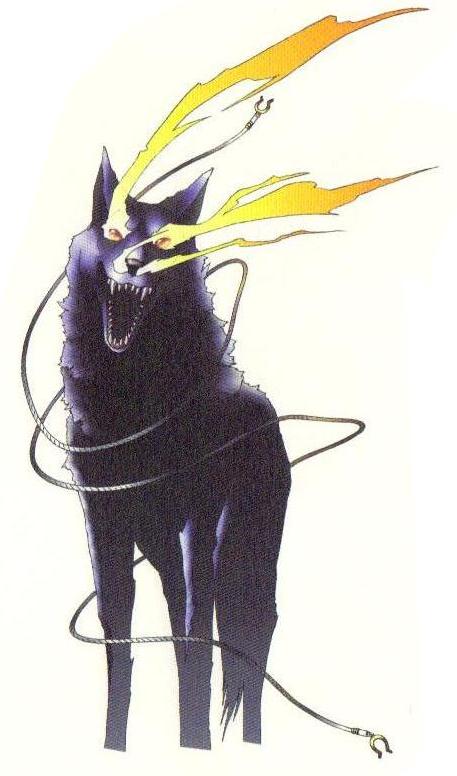 For those thinking “this is just a hype-ass wolf with lightning coming out of its eyes”, yes, yes it is. 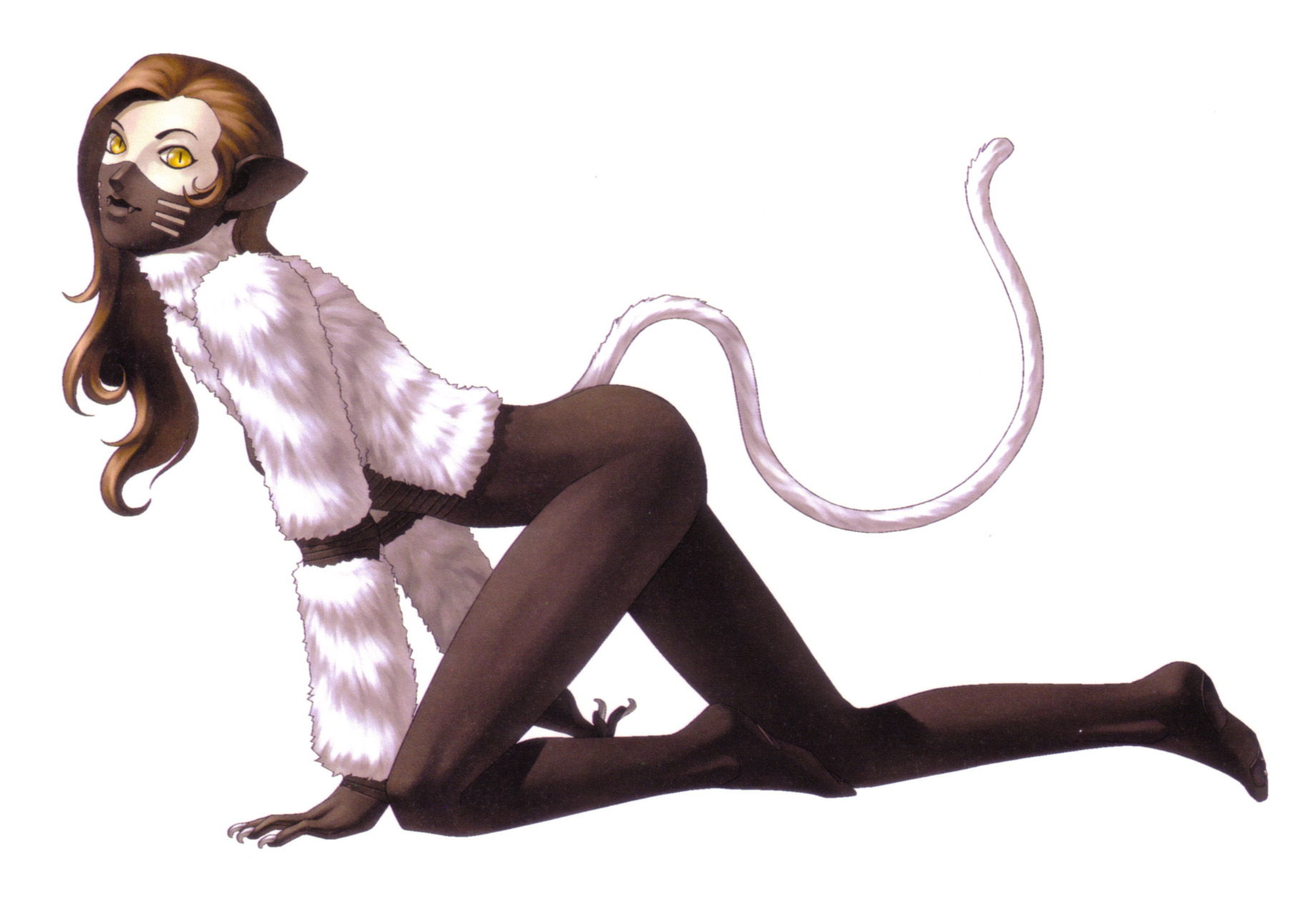 The other more common design, with the purple hair and white fur, is also strong but, for me, the head elements give the edge to this one. 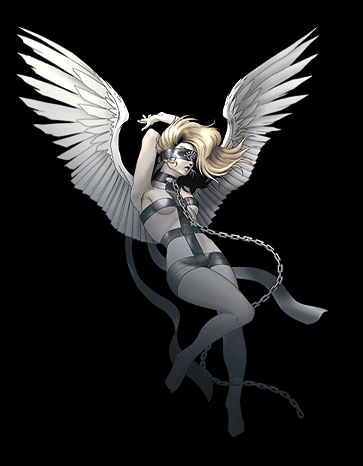 There’s something about using a single line as a bra that I find really appealing. There’s a variation of this design that has nothing covering it up from the chest down, in case you need something more ventitlated. 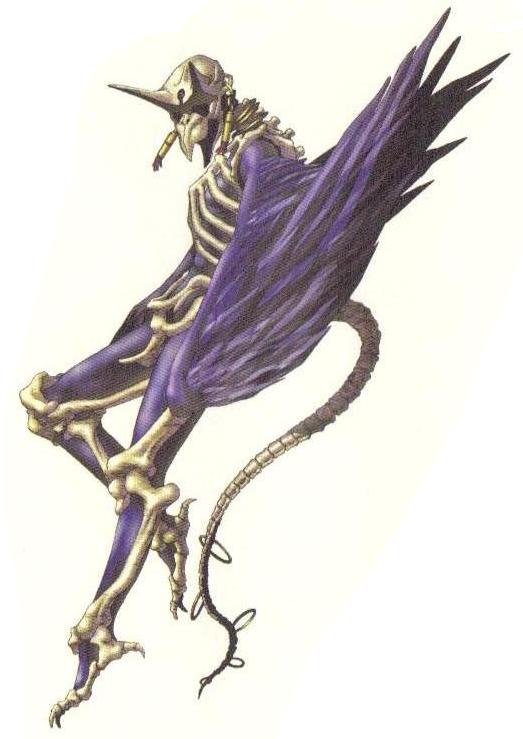 The poison-like motif strikes again, along with a “Hey guys, like what you’re seein’?” type of pose.

The quality of the gameplay, the writing, and the sound are paramount aspects which define the Shin Megami Tensei series. But, along with them, their distinct look and demon designs should not be ignored. So it’s absolutely no wonder that, much like with the Pokémon list, when first going through the entire roster of demons I found over 50 of them that could also be a part of this list. Kaneko’s style got to a point where it’s immediately recognizable and holds up extremely well.

Please do share your favorite demons but let me just leave you with a little story.

Last year, during the yearly book fair in my town, I was walking around when I heard a kid ask a lady in one of the stands if she had any books about various mythologies and gods. She said she unfortunately didn’t but asked him if he liked videogames and what consoles he owned. He seemed a little flustered, as he was with his grandma and it was as if he didn’t want to value his hobby too much in relation to books. Anyway, the lady told him that there was this PS2 game that would introduce him to various deities from a diversity of religions. The game she suggested? Persona 4.

I was really happy you know, to see such unexpected consideration given to videogames in a pretty unlikely place. Thank you for reading and keep being great.

You thought I had forgotten, didn’t you? Don’t worry; I know exactly where I’m posting this list. 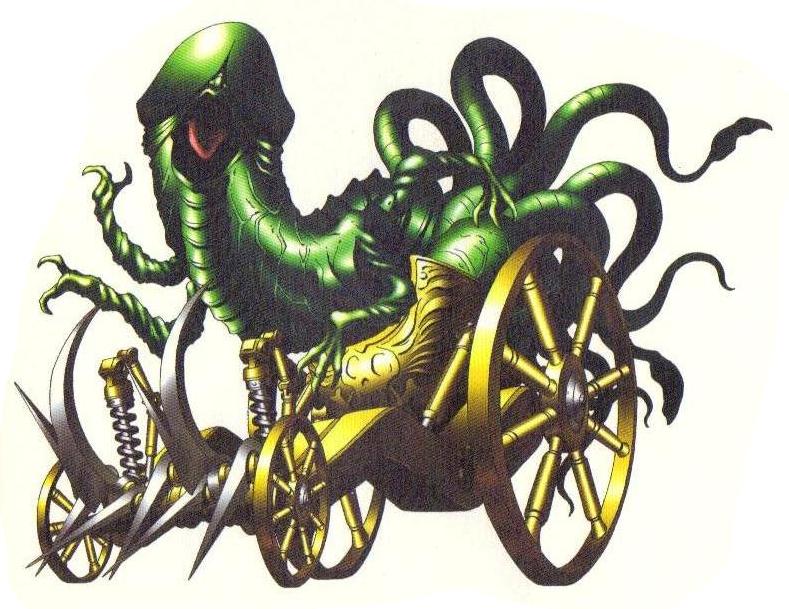