This week sees quite a few fixes to issues plaguing the alpha demo! Let's talk about a couple of the biggest and most obnoxious ones:

This... this has been the bane of my existence for quite a while -- BUT, there's finally a fix for it!

Once upon a time, the game, when minimized, or not in focus, still accepted input. Gamepad buttons would still register, as well as keyboard key presses. So if, say, you were alt+tabbed out and Googling something, any keys that performed an action in the game would register.

I tried to fix this by locking out controls when the game registered an "OS pause event". The problem with this, was that locking out controls if you were in a menu screen, title screen, fade in/out -- ANYWHERE but the actual game-y bits, you could not regain control when maximizing your window or trying to get back into the game again.

Now, you can alt+tab like a monkey on too much caffeine and the game (maybe) won't break! YAY!

Currently, the game only draws to an aspect ratio of 16:9, and this caused issues when in full screen on some displays.

Now, the game will respect the size of ANY crazy aspect ratio, while still maintaining it's visuals and aspect ratio.

I even got some extra use out of this older monitor! 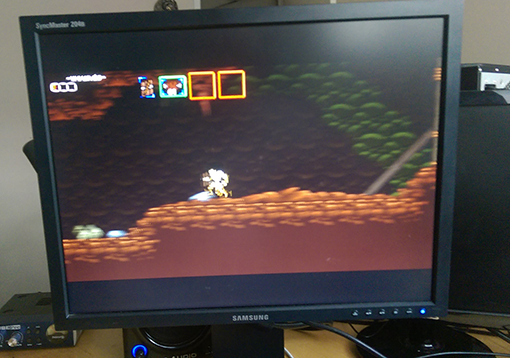 Different aspect ratios will be supported down the road, but at least now you can play the demo without having vital information cropped from the screen (like the player character's life bar).

Here are some (hopefully) extreme edge case issues someone reported to me: 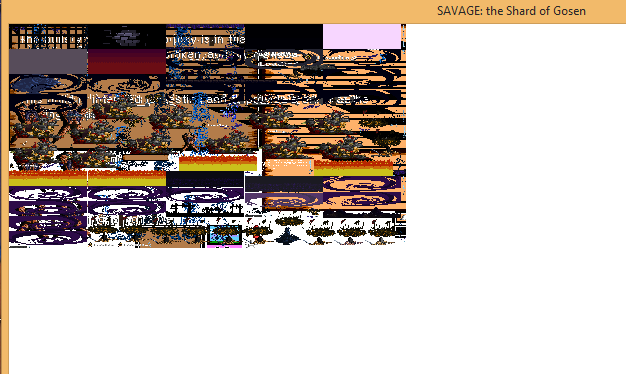 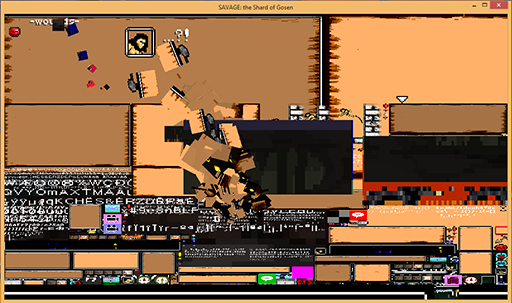 My first response to this would have been to take the cartridge out and blow into it.

Super weird (and very unsettling from a technical standpoint)! Though, I did get some silly enjoyment from seeing those screens. I have no idea what's going on here, but hopefully no one else is experiencing this madness. Let me know if you are! 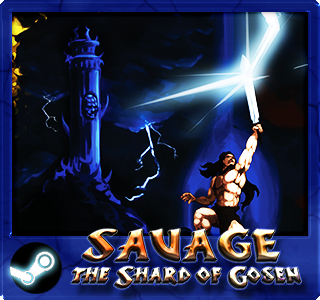 This week, I sent every backer a Steam key that gives you access to the current build uploaded through the Steam pipeline, regardless of the game's release state (i.e. it's not out yet, but you can play the in-development build RIGHT NOW).

Make sure to check your email associated with your Kickstarter profile -- if you DID NOT get your key, let me know and I will send it to you again via Kickstarter's messaging system!

It's worth noting, as well, that if you redeem your key and download the game, it will auto-update to whatever build is currently live, too!

Once I get to a place with the live demo that I feel is all tidied up, I will cease updating the demo. The game on Steam, however, will get updated frequently and you can play all the latest builds if you want to see how things are going before launch.

If you redeem your key on Steam, feel free to post any issues you have with the game here:http://steamcommunity.com/app/408060/discussions/1/

The latest build for the alpha demo, if you don't get it through Steam, is here:

It's a somewhat short list, but a big chunk of last week was spent making sure all of the Kickstarter backers Steam keys were sent out. Again - if you DID NOT get your key, make sure to check your email. If you didn't get an email, send me a message here and I will get you your key ASAP!

Thanks again everyone, and I hope you all had a great weekend!

Hello and thanks for stopping by!

My name is Matt and I've been working on an independent video game project, Savage: The Shard of Gosen, for a few years. For the past decade and a half I've had my hands in everything from art and graphic design, film and music. It's been very gratifying being able to funnel everything I've learned into a single project -- and finding out how much I've still got to learn about all that, and game development.

I've been documenting my experiences with the game and presenting them in a blog style format (among other things). I'm here to share my updates (bruises, broken bones and all), and see if I can share any helpful bits and pieces I've learned along the way.

Thanks, and have fun!
-Matt