Review: Zombie Night Terror (PC) - how the other half dies.

Releasing a zombie game on to an already shambler-saturated marketplace may seem like utter folly but Zombie Night Terror's take on the end of the world will have you cackling with malevolent glee.

Zombie Night Terror is 40% action game,  60% puzzler and 100% beautifully presented schlock,  casting you not as some lone survivor but as the driving force behind the zombie apocalypse.  Framed as a series of slightly tongue-in-cheek eighties-era movie vignettes,  the game has you guiding your undead horde across forty monochrome levels,  accompanied by an evocative eighties electro soundtrack that would put John Carpenter to shame. 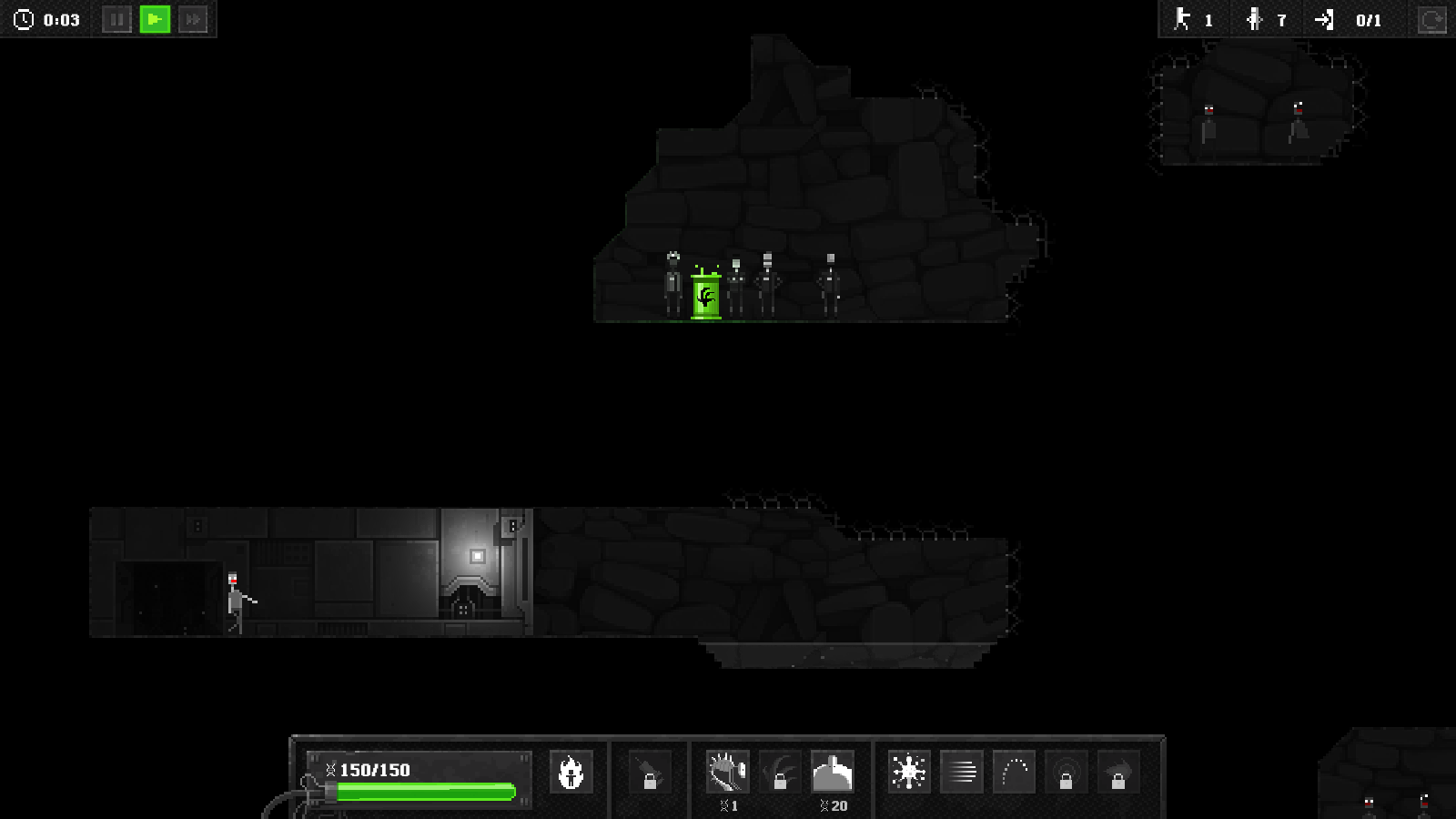 Zombie Night Terror's storyline is a little threadbare and is disregarded at various points in the proceedings which,  to be honest,  is entirely in line with the eighties horror movies that the game seeks to ape.   I really didn't care what my character's motivation was,  content to be playing a game that allowed me to amass my own zombie army.   I spent the first few minutes of my time with it just grinning like an idiot as my pixellated minions spread the plague through the hapless populace.

Like their movie counterparts,  Zombie Night Terror's ghouls are utterly brainless.   Left to their own devices, they will happily shamble over the edge of a building, splattering on the floor below.  Luckily for them and unluckily for humanity,  you are able to imbue individual zombies with special abilities.   So if your horde is in danger of falling to their doom,  you can turn one of them into a zombie overlord who will block other zombies' movement.  Or should a group of well-armed humans be causing  a problem, you can choose to transform one of your zombies into a crawler, who can clamber up a wall and drop down behind them.  Not all of these abilities are available from the get-go, requiring you to collect barrels that are secreted within the level. 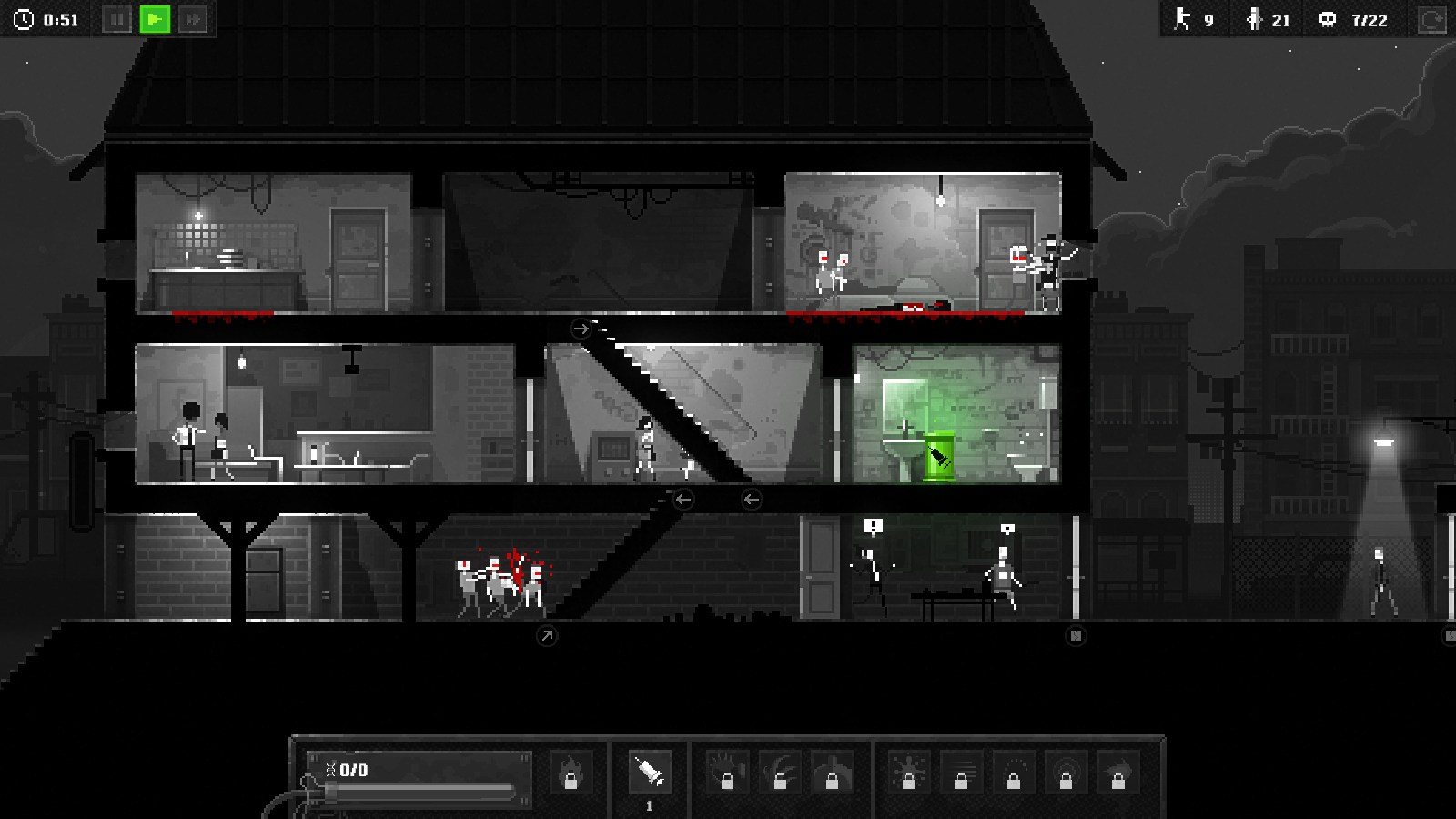 If this sounds a tad familiar, it's because Zombie Night Terror draws inspiration from nineties game Lemmings  - a fact acknowledged by the game's developers.   Though unlike Lemmings,  Zombie Night Terror actively encourages you to sacrifice your minions when necessary, replaceable as they are.  One bite is all it takes for a most of the humans to meet their demise,  the resultant red arterial spray being the only splash of colour in the game's washed out world.  They then rise to join your shambling and gender neutral  horde,  ready to sink their own teeth into another poor victim.

Converting humans to your cause is an immensely enjoyable element of the game, especially if – as I am – you're a zombie aficionado.   However,  steamrollering over your enemies becomes a less of an option as you make your way through the game's levels.  Not only do you find yourself up against stronger foes,  the game actively places obstacles in your path,  requiring you to think carefully about how to best employ your zombies'  abilities.

Some of the obstacles may seem insurmountable – I  certainly had no idea how I was going to guide my horde out of the way of a speeding train.  But Zombie Night Terror's difficulty is so well pitched that failure is rarely frustrating and the moments when you finally manage to conquer the level  are immensely rewarding.  So engaged was I by Zombie Night Terror that I was able to tolerate the game's boss fights, which feel a tad out of place when compared to the measured pace of the other levels. While forty levels may seem like a lot they're varied enough, both in terms of setting and the challenge they present, that the game never outstays its welcome.

Boss levels aside, the other – albeit minor - gripe I have with Zombie Night Terror is that since some zombie types have multiple abilities it's possible to forget about a particular shambler's set of skills, inadvertently making  the game harder for yourself.  I spent a good ten minutes trying to lead my zombies past snipers – with some degree of success – until I twigged that  the tank zombie could spit acid far enough to take out the snipers in their nests.  With that revelation, the life expectancy of the humans on that level dropped rather rapidly. 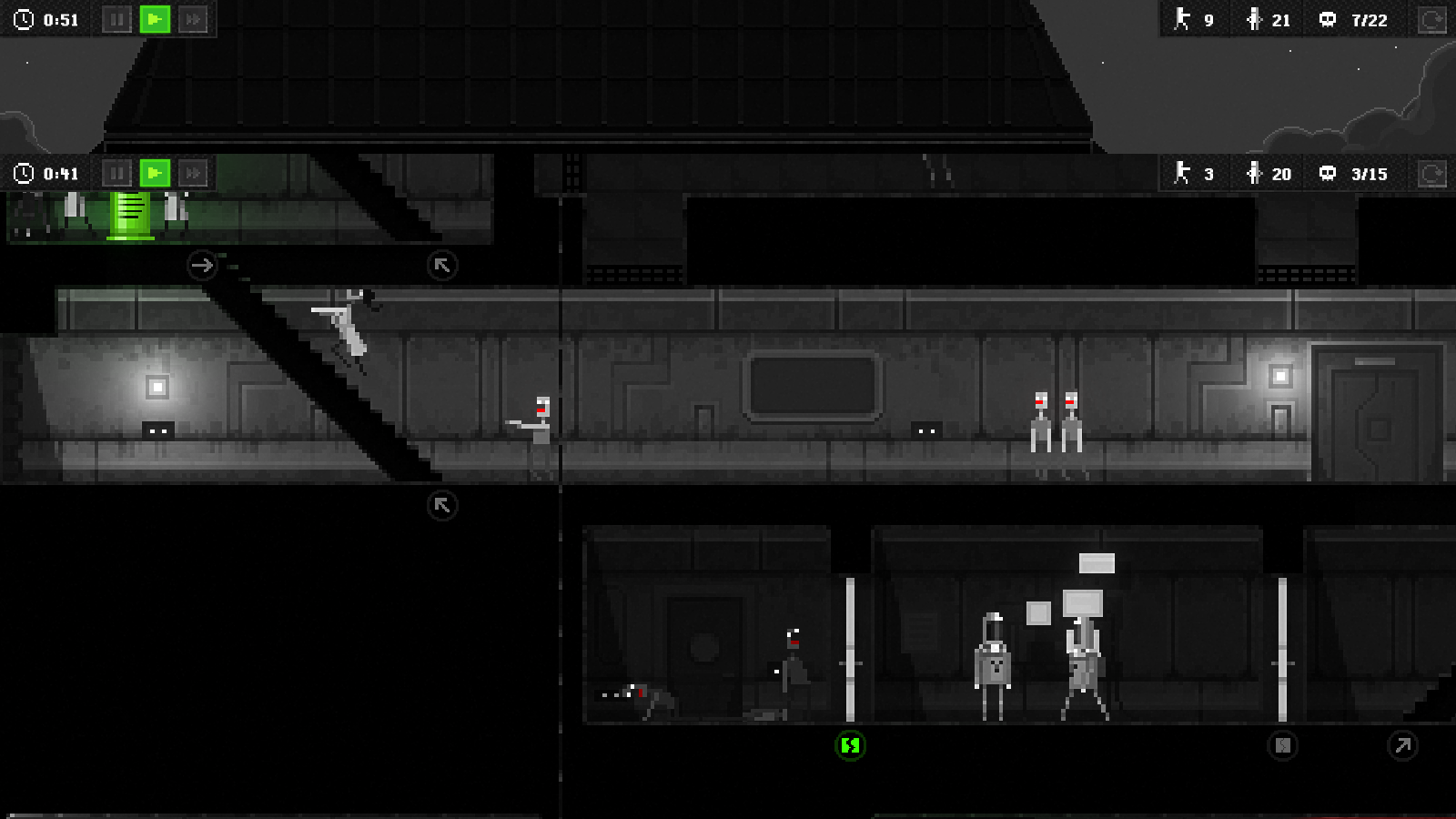 It would be all too easy to dismiss Zombie Night Terror as just another zombie game, one of the 300+ that have been offloaded onto Steam.  Yet it succeeds in taking an over-familiar premise and turning it entirely on its head, delivering an experience that's gruesome and glorious in equal measure.