In the future, there will be robots. Clumsy, boxy robots. Some will actually have monitors instead of faces. Others will be simple flying rigs carrying optical sensors and a gun. The future is kinda silly, you see. That's why you can replace your robot's torso with a rubber ducky in Heart and Slash. 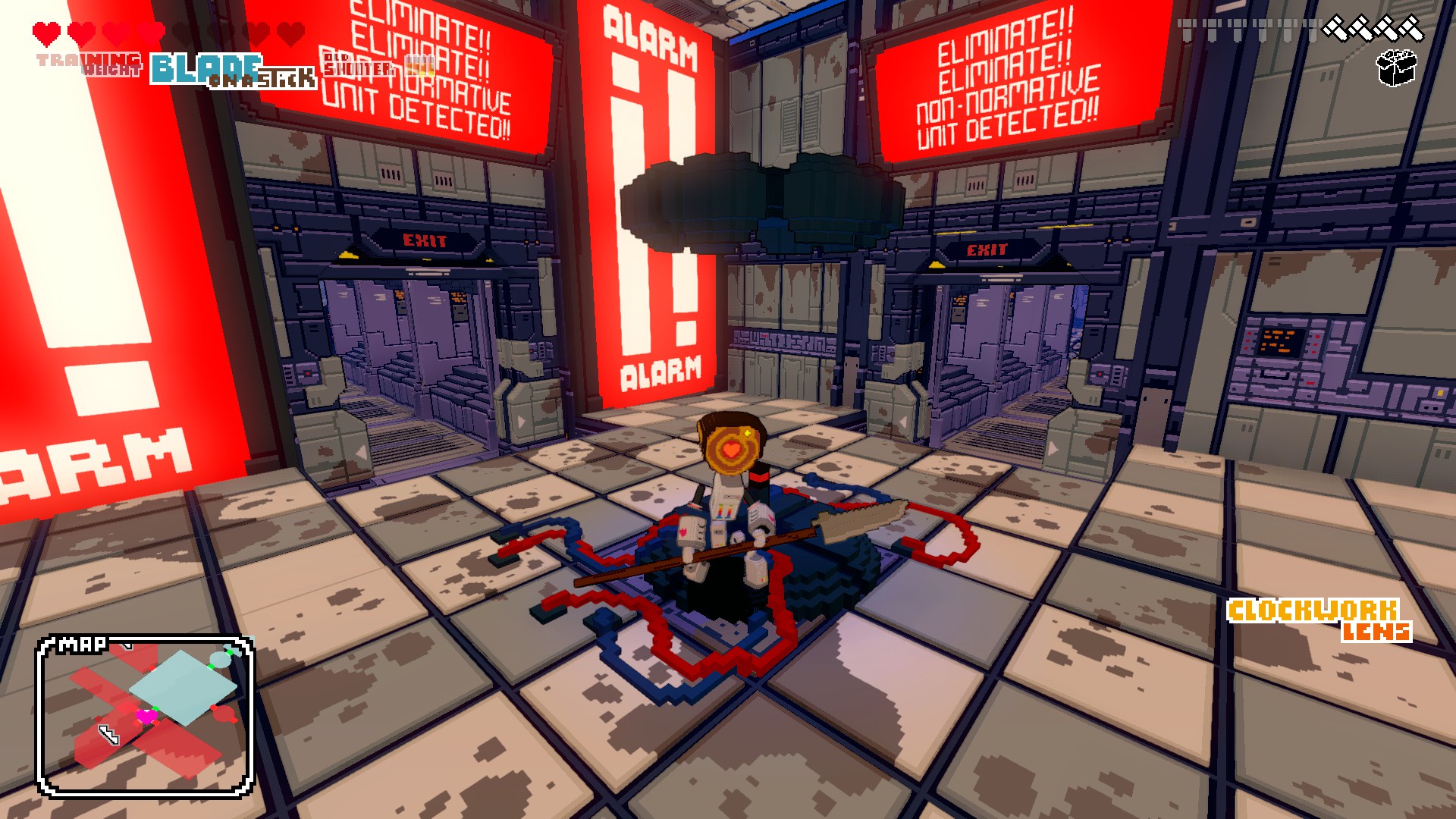 Behold: one of the most useless weapons in the game!

Heart (HRT-1) is a robot. A robot with a heart pictogram instead of a face! He's non-threatening and good with children, or something like that. The good little robot was barely going through his training paces at the corporation that built him when the AI QuAsSy (Quality Assurance System) rebelled and destroyed all humans in a robolution. A hundred years later, HRT-1 is reassembled deep in the bowels of the factory and has to escape, guided by fractured messages from his creator.

It's a slasher game with rogue-like elements, and boy do those elements show. You start every run the same way - you run out of the assembly, gather the three weapons or items randomly given to you, whack a computer (when you only have a hammer...) to get a message from the prof, and then continue through the randomly generated collection of rooms while slaughtering heaps of robots along the way. You die - or want to quit the game because life is in the way - you have start all over again, with the collected bolts you had at the moment of death and the chance to find the new weapons that you unlocked. 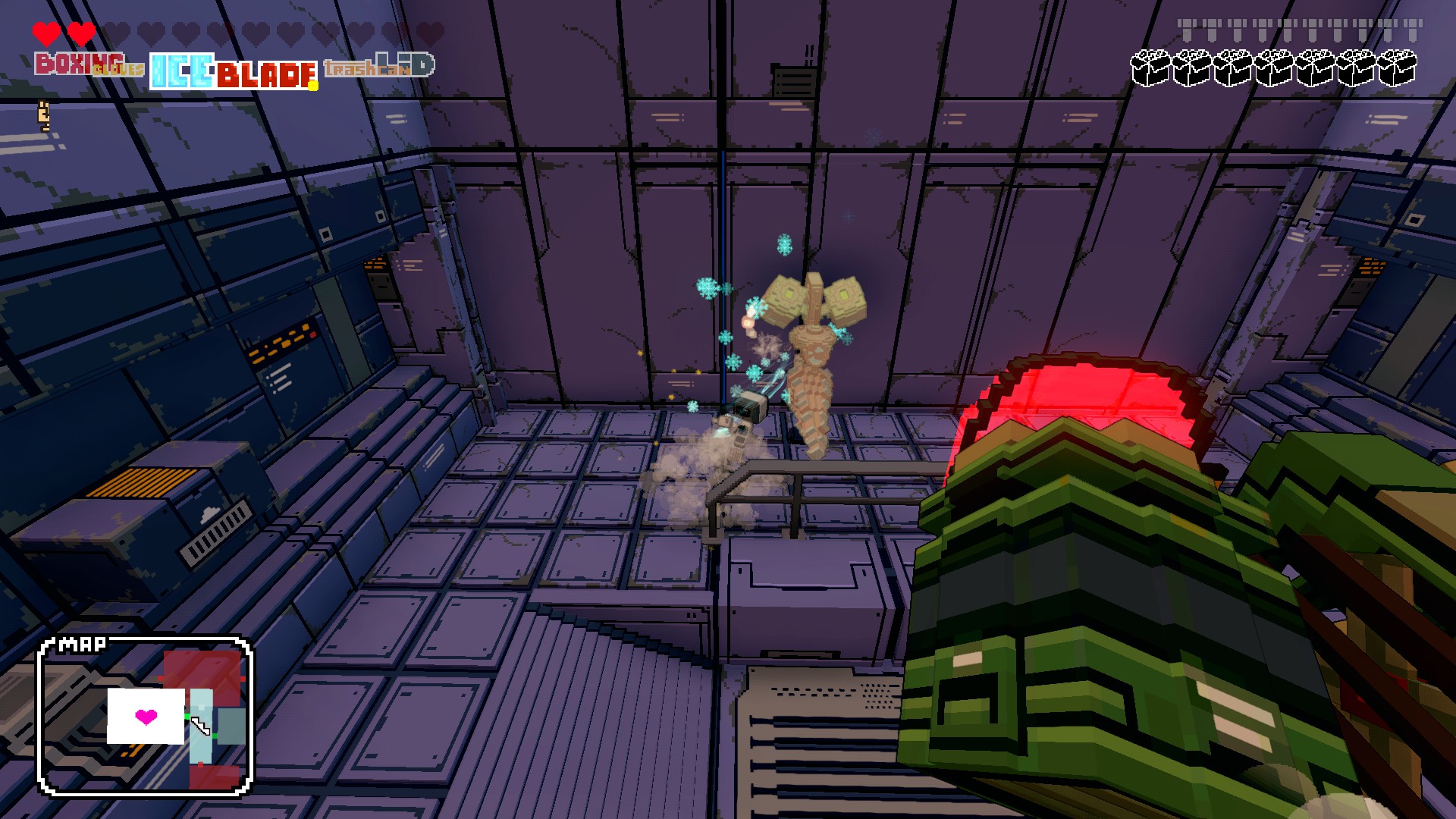 Combining melee and anti-air into one package...

This can screw you over in various ways. For example, you can get a crappy selection of weapons. You might be lucky and wield a rocket hammer (it's badass) or a thunder hammer (a non-copyrighted version) and be the terror of all that your survey... or you can end up with crappy punching daggers, disappointing naginatas and planks. You can have three weapons at one time, with one of them being your primary, and all of them can be nigh useless or become nigh useless while you play. For you see, enemies are color coded for their vulnerability to damage, and God (or Robot God) help you if you run into the green (the game insists they're actually rusted) ones with some dinky, non-elemental damage blades. Sure, persistence will help you slaughter any kind of robot foe, but doing it in a timely manner would help a lot. On the other hand, starting the game with, say, an electric axe is easy mode.

You are not guaranteed to find new weapons along the way, and the bolts you collect from slain robots work as XP. Collect enough bolts and you get a box, and boxes are spend improving your weapons, your robot and your parts. Unspent boxes are also what carries over between runs. So depending on your luck, you might end up with nothing to upgrade, since you're left with a single weapon (you recycled the others for an HP boost) and a robot that are both upgraded to the max, and you just can't find any new stuff. To be fair, none of the robot parts I have found had been very interesting or useful. Not when compared to the ROCKET HAMMER! 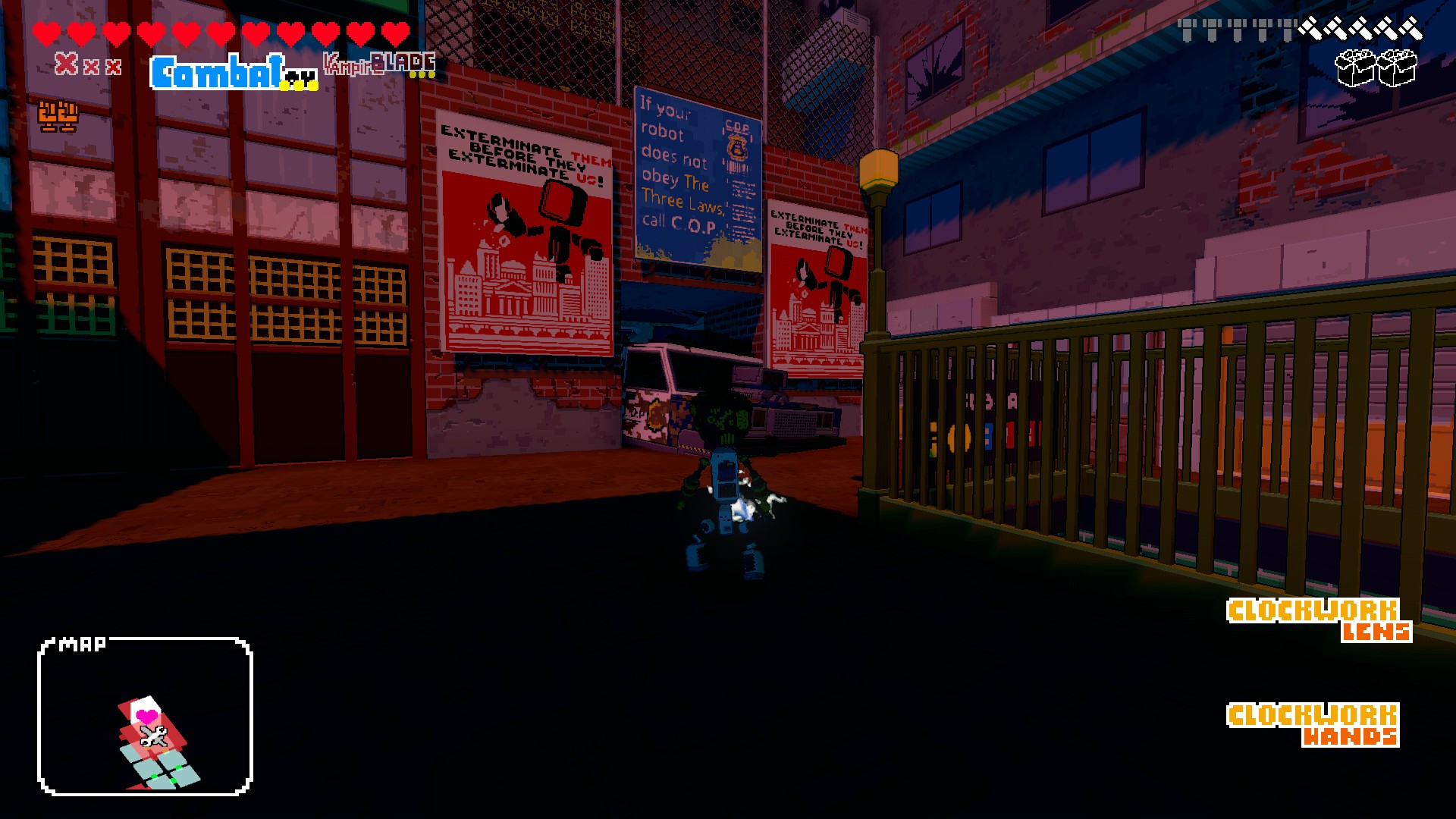 Detroit: De-three-law-yourself and face to bloodshed

And you really need good weapons to get through your robotic adversaries. It's really hard to say what you will be facing before entering the room, as enemies spawn (are delivered via hatches in the floor and the walls and the ceilings) only once you're inside. You will have an asortment of flying bots (good thing you can reach them with jumping), small boxy robots, lean humanoids, fat humanoids, multi legged giant monstrosities, each with some variation to their theme. The fights aren't usually too hard, though they can drag-on if you don't have the right weapon (you usually don't). Bosses aside, the chainsaw robots are the most dangerous enemies for me, as I can hardly avoid their charge attack. They're a real pain to deal with in melee and ranged weapons are really uncommon.

The combat itself is pretty simplistic. You have your light attacks and heavy attacks, and you can chain them into combos. Of course, they act differently for different weapons - ROCKET HAMMER! light attack is basically a charge forward, while heavy attacks with thunder hammer unleash the energy generated in it as a blast. You can also do attacks in the air, and landing attacks. Holding either Z or C on PC toggles your secondary weapons - it's not a very comfortable set up, and I feel like this is one of those games that would be serviceable with a gamepad. 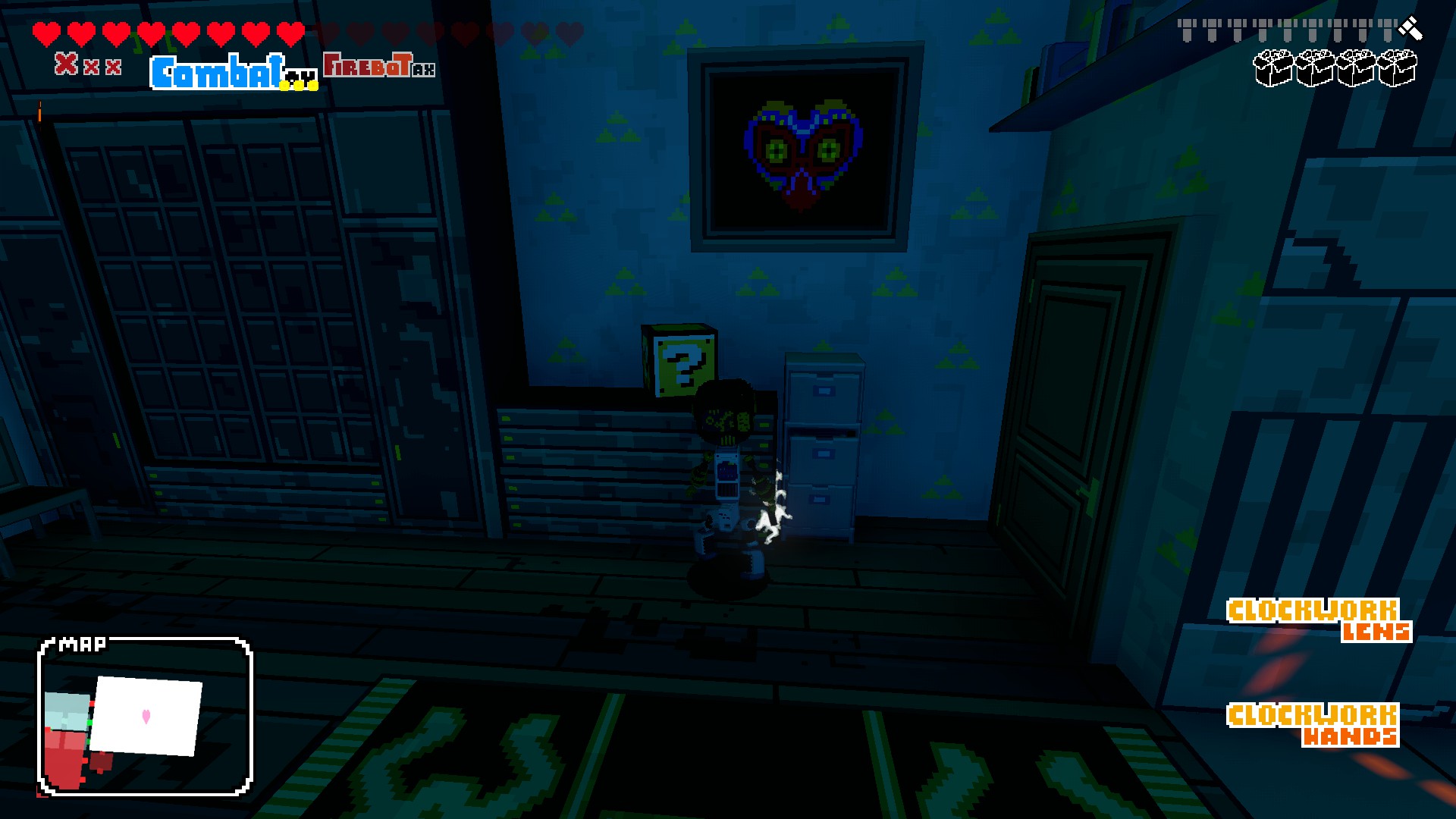 Making sure that we're all gamers here.

The worst thing about the game is something I have yet to mention. Simply put, the game plays an anime tune during your adventures and it gets old and boring fast. While many roguelikes have the problem of boring, repatative beginings, the tune stays with you even longer and it starts to get grating. I would contrast it with something like Endless Space's track, which got annoying after playing the game for seven hours straight (ah, they joys of university life), and I was almost delirious at that point. So yes, more than crappy weapons dooming your runs, it's the music that makes the game hard. On the other hand, the visuals are pretty, obviously trying to get that retro feel\. I like the enemy design, especially on the heavier bots, and the environments are generally well done, if none too creative. Both of these points change by the end of the game.

Hack and Slash is a cutesy, anime-inspired (at least in some ways) hack-and-slash/action arcade game where you kill a bunch of robots. While the roguelike elements do get in the way, at least a little, it's a generally a fun and easy romp. And I say that as a person who doesn't really play games like that!