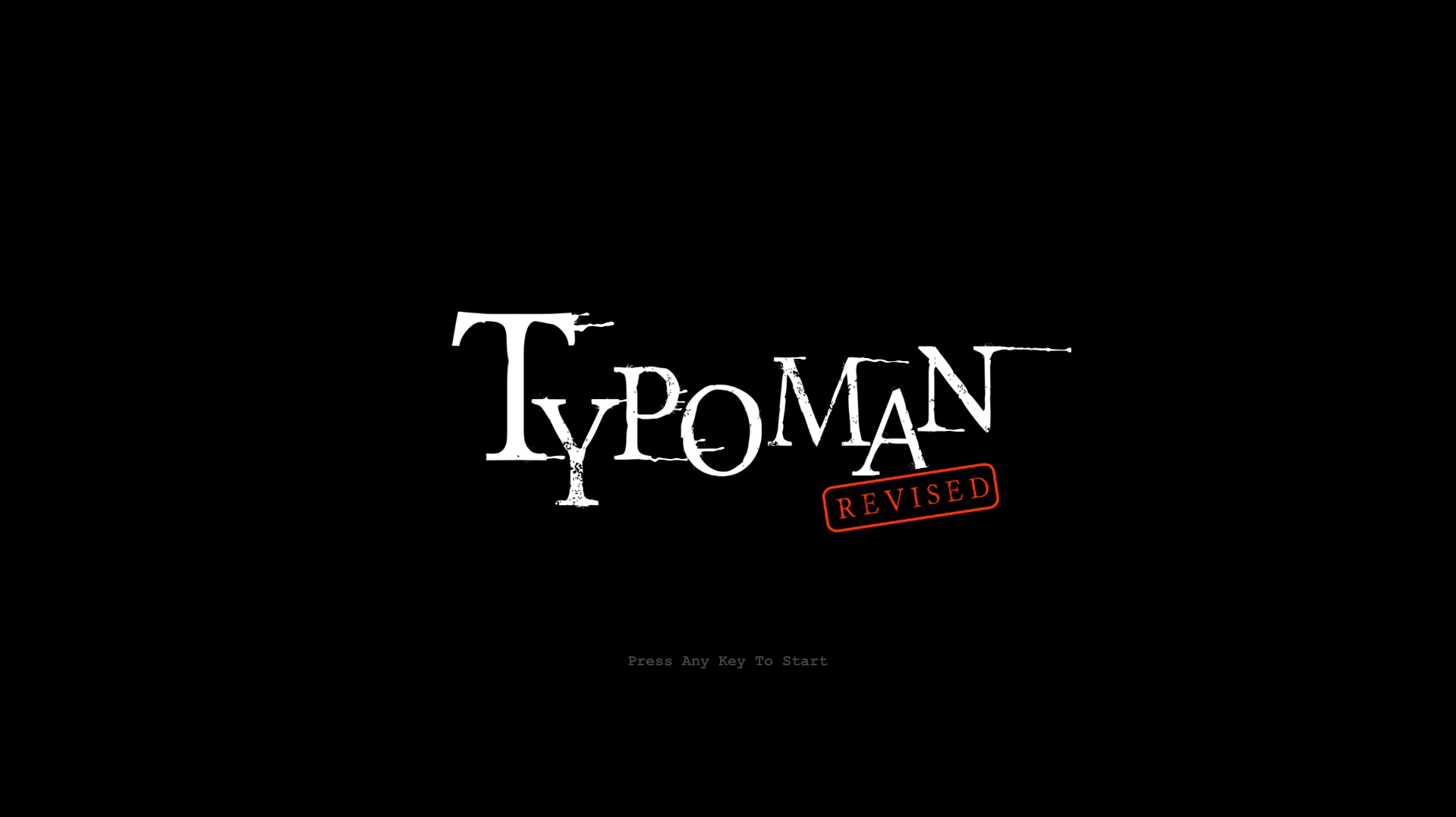 Words. Words have meaning. Words have power. Typoman: Revised is an Indie platformer/puzzle solver, originally released on Wii U in November 2015, in which words control the world around you. You play as “Hero”, a character composed of letters (h, e, r, and o to be precise) as you try to survive in a world filled with deadly traps and terrifying enemies and triumph over chaos and negativity.

Being a platformer you spend a lot of your time running and jumping around each chapter of the game, however there will often be obstacles in your way that will require you to spell out words using letters strewn about the area that describe what needs to happen. For instance, there are times where a lift will require power to operate, so you spell “ON” to start it. A platform may be too low to reach the other side of a chasm, so you spell “LIFT” or “UP” to raise it to the correct level. Sometimes you may need to “CUT” a rope to get the right letter to complete the critical word for a puzzle. 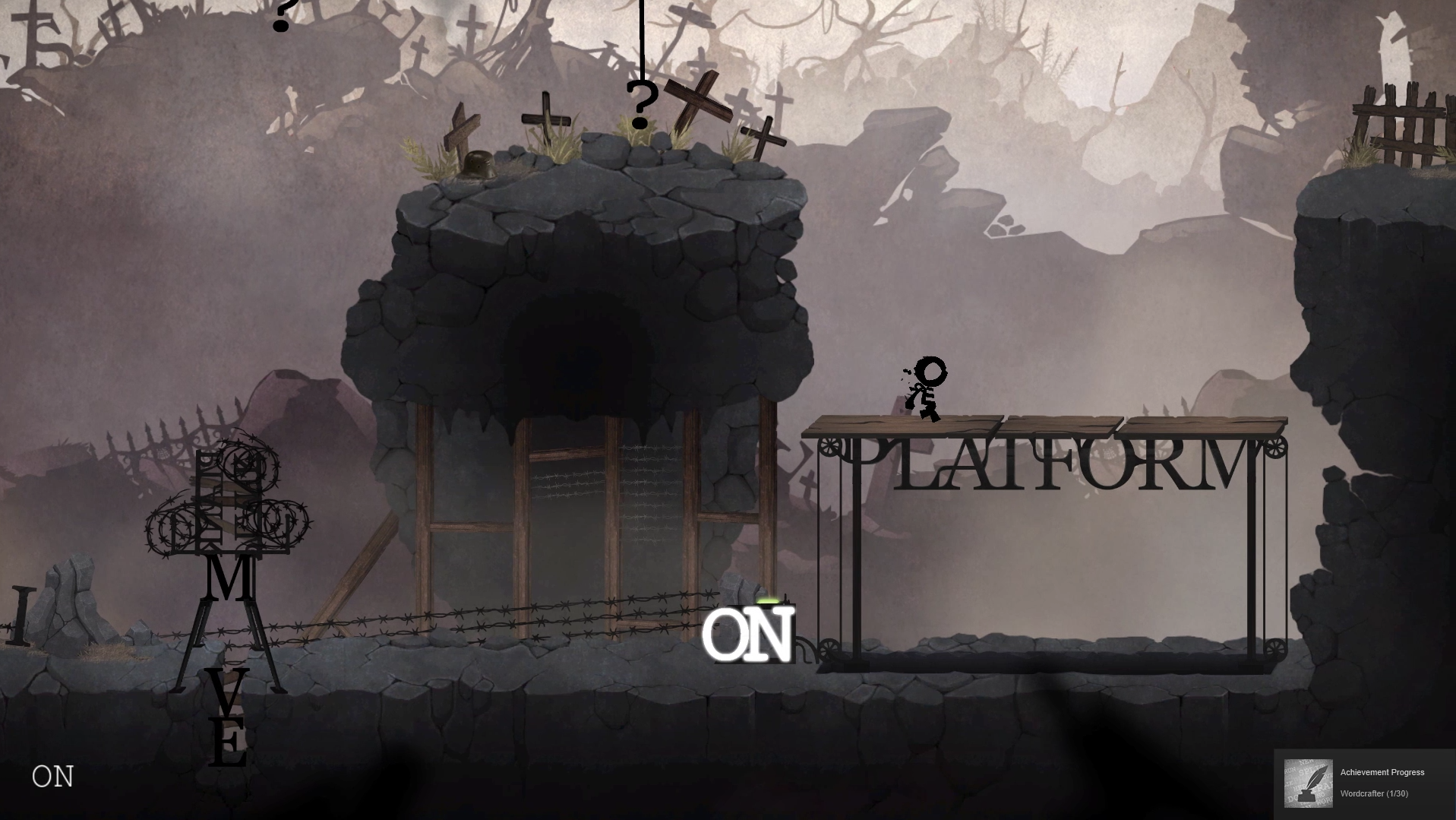 Just as central to Typoman is the puzzle element. Puzzles range in difficulty and generally require you to unscramble a given set of letters to craft the keyword needed to solve it. As you progress through the game the puzzles will get harder and harder, requiring some planning and forethought prior to attempting them. Often times it will require a bit of outside the box thinking in order to solve them, as the route to the solution can be fuzzy at times and lead to some frustration. Adding to this complexity, is the ability to create a small robotic companion “LIE” later in the game that when pushed towards a word will absorb it and spit out the antonym, allowing you to form words you previously did not have the letters to make.

Besides the puzzle aspect of the game, you will be hunted and attacked by creatures made of letters as you are, such as the clawed “HATE” monster or the alien like “FEAR” monster, who are capable of tearing you apart in an instant. To protect yourself you must use the environment to outsmart them or construct words to fend them off (such as “LOVE” and “GOOD”), though sometimes the only option is to run as fast as you can. There are also a few boss fights spread throughout that each feel unique in design, but often fall victim to “wash, rinse, repeat” in terms of the fight itself. 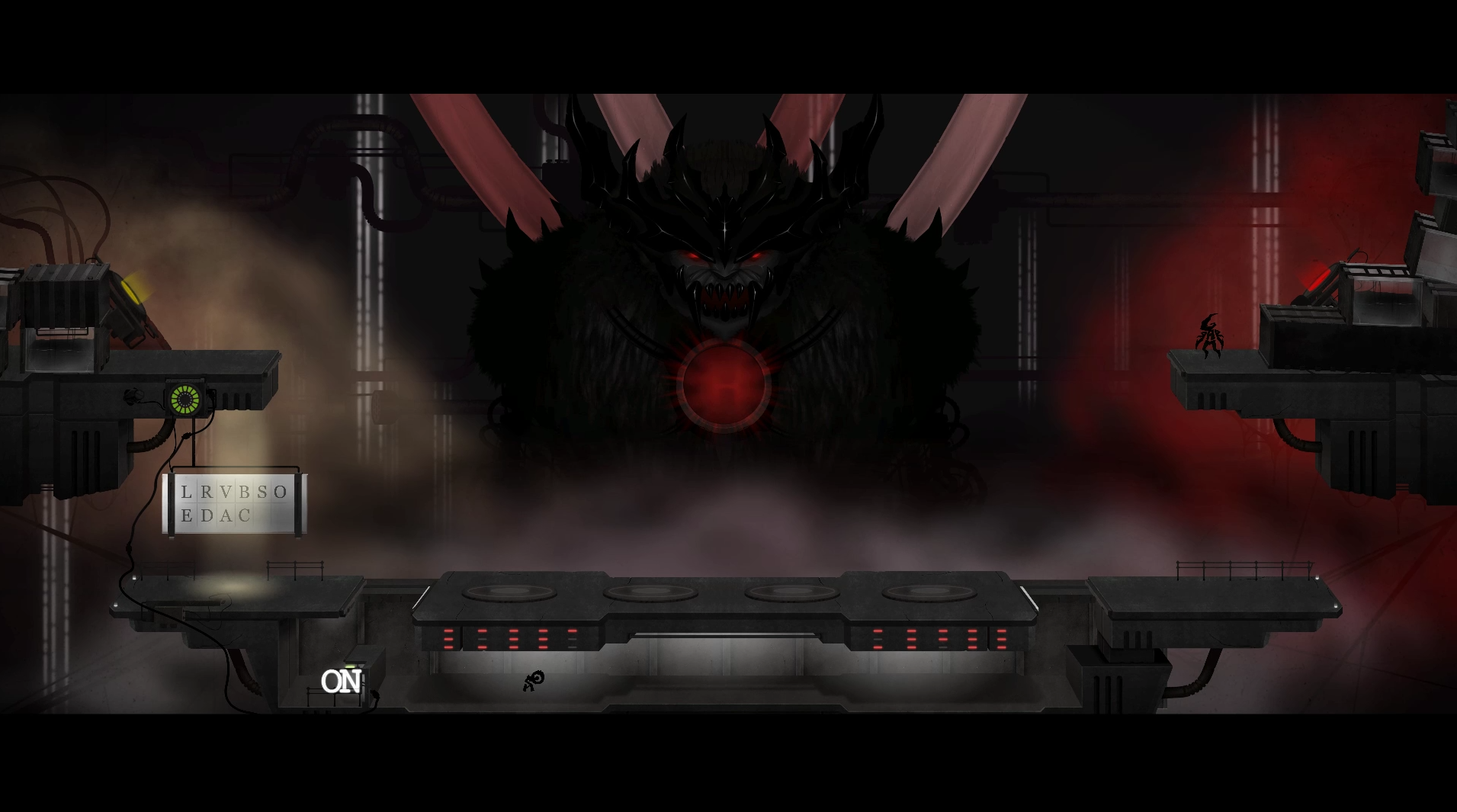 The design of Typoman is very appealing, though quite dark, with artfully drawn environments that really reflect the bleak and almost apocalyptic tone of the world that “Hero” exists in. Dilapidated buildings and ravished trees, dark cavernous interiors and sickly poisonous jungles, there is a lot of variety in the environments from chapter to chapter. There are parts of the game that come across as quite unsettling and genuinely creepy, the greatest example being the jungle of hypodermic needle vines that cause the screen to become warped and wavy when they impale you, and drag you slowly to your death if you get hit again while in that state. Aspects like this do a great job of further reinforcing the sinister otherworldly feel of the levels and really show you what horrifying things “hero” must overcome to succeed. 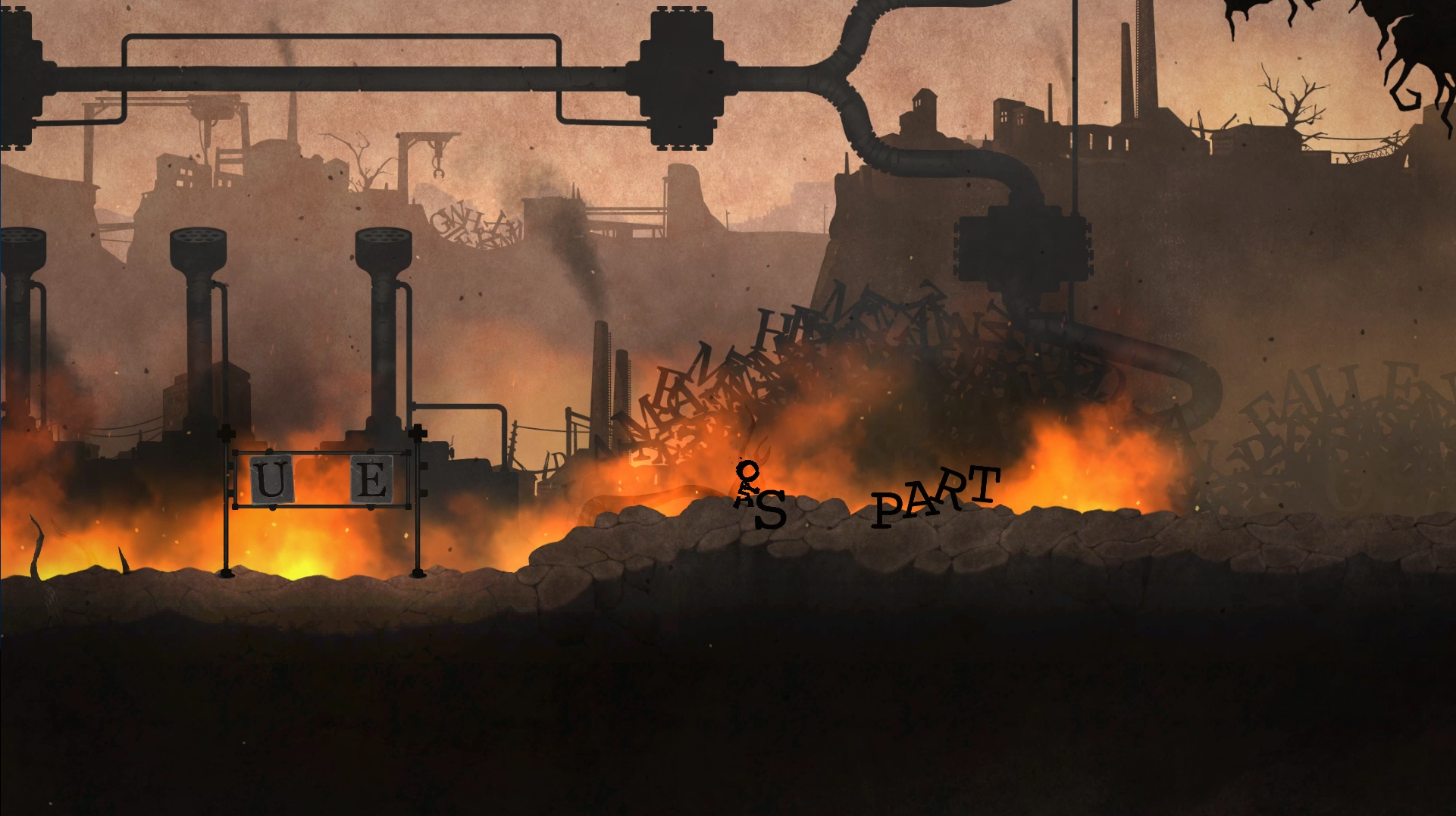 As words are the focal point of the game, the environment is full of subtle and not so subtle inclusions of vocabulary. The letters “TREE” are contained within the destroyed trees, the spikes in traps are capital A’s, and as stated previously the characters and enemies are all made of modified letters. Cues are provided to the player through words such as “PLATFORM” or “ELEVATOR” to let you know how to interact with the world around you. 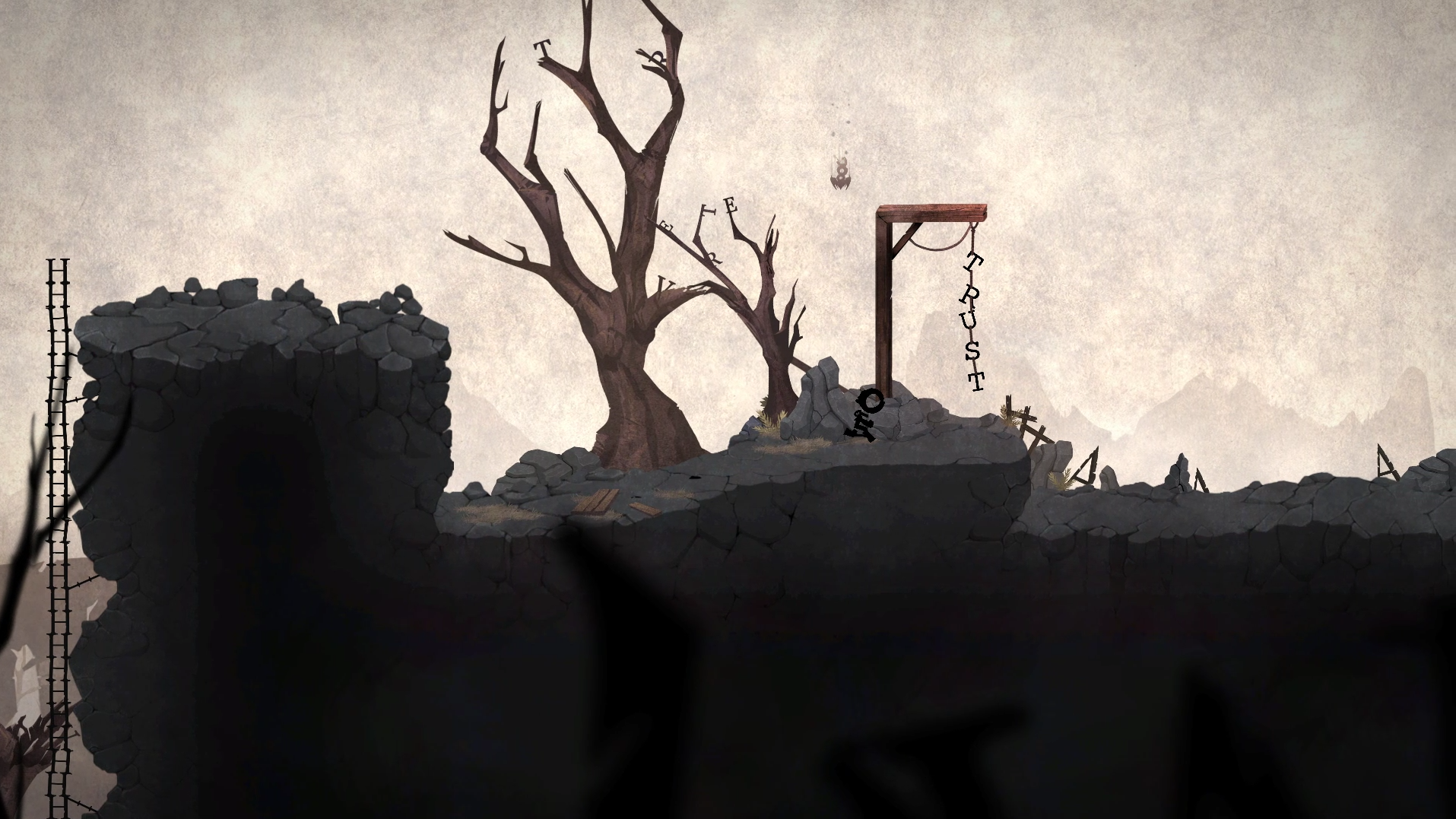 The music compliments the gloomy and decaying land with a lonely and saddened ambiance and overall sinister tone. Each chapter has its own theme that also matches with the design of the level, such as incorporating the whine of pneumatic pistons as a musical element in the factory level. The main downside of the sound portion of the game was that there are no options to adjust it. The default level is all you have and is unfortunately very loud; I would not recommend headphones while playing the game. It is strange that such a basic configuration ability is not present.

Overall, I really enjoyed Typoman and found it to be refreshing and unique despite its myriad of shortcomings. It could use better keyboard controls when it comes to making words and the price point of $14.99 is a bit high for a 3-Hour game experience. If you are into puzzle games I would recommend it.