One of the best things about the growth of games (and media in general) is seeing them, and the perception of them, expanding beyond a single audience and a single objective. Animated movies aren’t just for kids, reading text-only books doesn’t need to be a hallmark of adulthood and games don’t need to be made solely for the purpose of escapism.

While I mainly consume media with the intention to challenge myself, for it to make me think and ponder and develop, that doesn’t at all mean that I believe there isn’t merit to be found escapism, far from it. There are times when I know that what I need is just some relaxed fun. Prior to this one, the extent of my knowledge on this series was that there was game on the Gamecube that people generally seemed to enjoy and a dumb photo-taking thing that no one cared for.

That said, it was just because of my habit of downloading practically every demo on the eshop/PSN that I decided to try Zip Lash out. And wouldn’t you know it, I found it really appealing! Seriously, I’d probably buy even more games if they just released as many demos as they used to back in the day. But that’s a conversation for another day, now back to Chibi-Robo.

Before I decided to buy it though, I did a bit of research to try and see what the general appreciation of the game was, as I tend to do. What I found out was that it wasn’t all that positive. Complaints about it being boring, uninspired and a waste of time come to mind. The fact that it didn’t live up to previous entries in the series was also brought up, but it didn’t  exactly make that much of a difference to me since I no such expectations.

But that demo though…I genuinely enjoyed it, so you can guess what happened in the meantime. I took the plunge, cute-ass amiibo included. And, not so much to my surprise, it was a whole lot of fun!

The game looks pretty good, the zip lash mechanic, in the vein of Bionic Commando, works smoothly and is fun to use and the soundtrack is unexpectedly killer. Despite not being a difficult game, it has its fair share of challenging moments. And the blatant product-placement in the form of various types of candy from all over the world that can be found throughout the levels were either very nostalgic or introduced me to a variety of sweets (really glad they included those descriptions). Really neat boss designs as well, not expecting that in the slightest.

Chibi-Robo itself is the cutest thing, and I’d find it hard to come up with a better intro than having the camera zoom in on it scrubbing the satellite’s exterior with a toothbrush. You go little guy, scrub it good! All those silly dances and mannerisms are also on point. I went from thinking that it was a good-looking character-design to really falling in love with it. 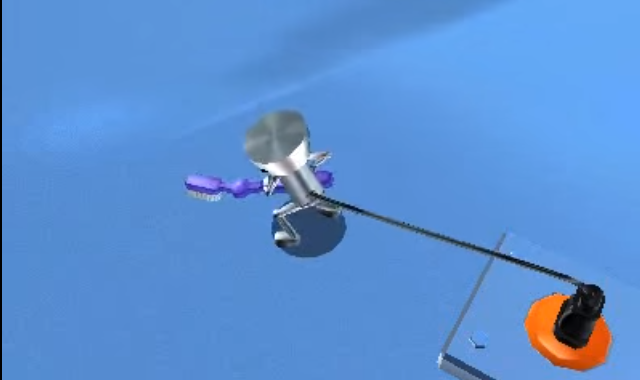 Now, this is not a flawless game by any stretch of the imagination. For some reason, they thought that until you compete the 6 levels that are part of each zone you must spin a wheel which technically lets you play the levels in any order (besides the first one). I don’t know what the thought-process was but I ended up just trying to play them in order, and I didn’t find any incentive to not doing so. Maybe just leave them all unlocked since the beginning?

There are also some variations on the gameplay in select levels, where you’re on a surfboard or a skateboard, among others. For the most part they work fine, but when you’re trying to collect everything it can be more annoying than anything to get the timing right.

Speaking of the collectibles and secrets you can find – coins, candy and little robots – I was expecting there to be some sort of reward besides simply being able to show other people that you got them all. Some costumes would be nice; like it would be nice for them to be more straight-forward outside the ones you get from collecting all the candy. Some are random, others you need a password that I didn’t fully understand how to acquire.

Anyway, none of that detracts from the overall enjoyment I got from it, which honestly is what matters most to me. It also reminded me of a similar experience I had with another 3DS game: Super Mario 3D Land. I didn’t play it right when it was released, but I was aware of the criticism directed towards it, which similar complaints in regard to the lack of challenge and innovation.

But when I got to play it, from the very first moment I controlled Mario until the very end, what awaited me was a considerable number of hours of unabashed joy. I constantly felt my lips curving into a smile whenever I spent time with it. It was just the level of challenge I needed, the kind of relaxed fun that sometimes goes missing from my life, since I usually direct so much of my attention to media with other purposes in mind.

Chibi-Robo managed to remind me of that and give me a brief moment of relaxation and simple joy that I sometimes crave. I sincerely hope you have games or anything that also do that for you because it sure is great to have good vibes all around.