From my backlog: All Star Cheerleader 1+2

I didn't know cheerleading is a billion-dollar industry. with annual world championships. Or that they're trying to become included in the Olympic Summer Games. Now I do, and so do you.

In case you ever wanted to be a cheerleader, I really doubt this game will help you live that experience. While the focus in the ASC games is in the cheerleading competitions, I'd think the actual gameplay doesn't resemble real-life cheerleading. And if you think "this could've happened only on Wii", may I point you at Let's Cheer (2K Play, 2012) for XBox360 Kinect. Lollipop Chainsaw (Grasshopper Manufacture/WB, 2012) doesn't count, naturally. And All Star Cheerleader got a DS release as well... but it has Osu! Tatakae! Ouendan (iNiS/Nintendo, 2005) and its sequel to contend with as cheerleading games (based on what I've read only; I've never played those games myself), even if they represent another side of the sport/activity.

One of the first questions you might think is, "How casual is the game?" That depends a lot on what you consider "casual". It is not a game requiring dedication in the sense that you need to be able to pull of high kicks, splits and lift other people up, but it can also provide a solid challenge for the uncoordinated... made harder by what I consider pose recognition of the spotty variety.

Both games have lengthy story modes. The story of the first one is about a newbie coming to fill in the boots of an injured cheer squad member. The team advances through various competitions and the strained relations with a rival squad also feature heavily in the cutscenes between competitions. The sequel is more about internal team issues when an outsider (the player) comes to take the captain's position. That is to say, very drama-heavy stuff. But compared to We Cheer (Namco, 2008), I haven't seen "Oh em gee" among the lines said and actually voice acted. Props for letting the player to play also as a male. 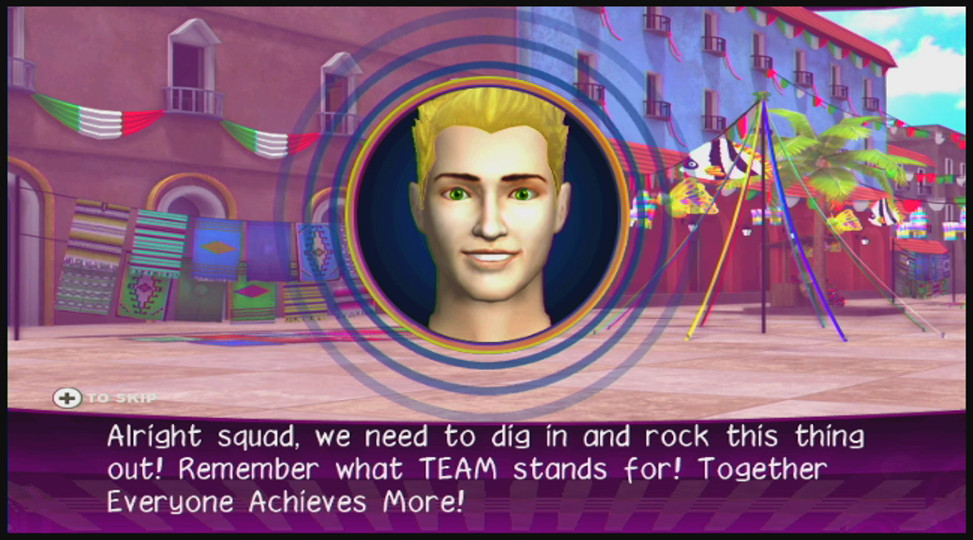 That's me, the team captain in All Star Cheerleader 2. Out of respect for myself, I'm not showing what the team muttered after that. Oh wait, I totally need to. For context. 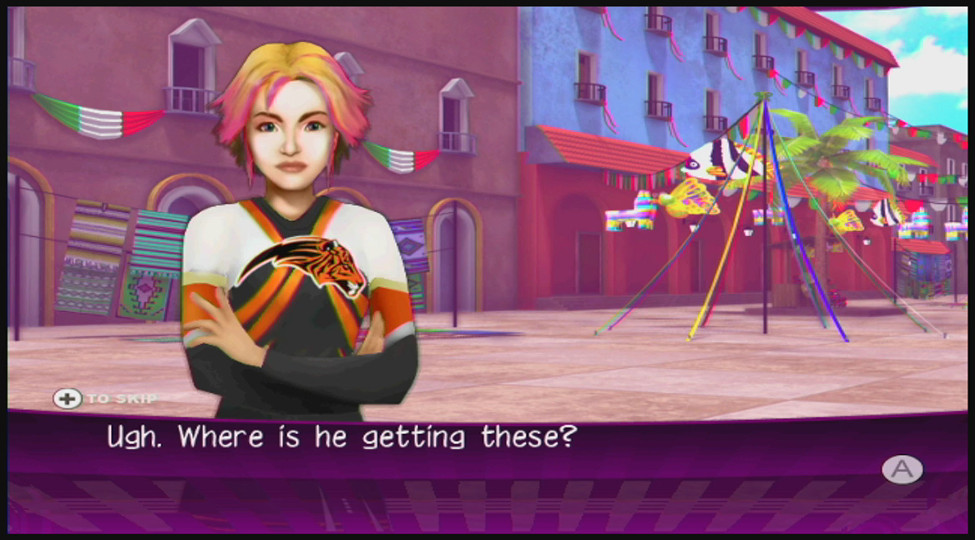 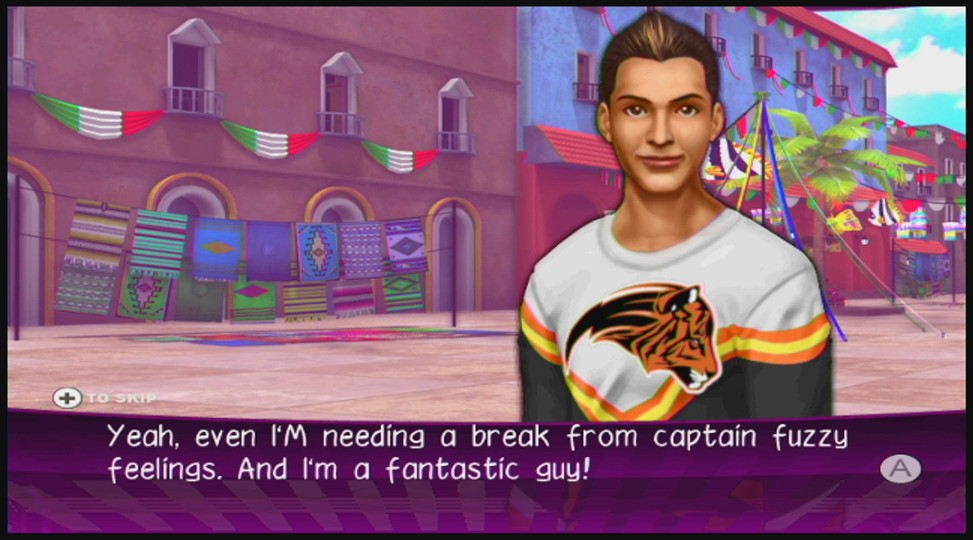 As the player plays through the campaign, new music pieces are unlocked for single rounds. And here's one problem: I said music pieces, not songs. The first game has licensed SOS by the Jonas Brothers (whom I hadn't heard of outside this game). The rest are... not something I don't think I'd listen to by themselves: I think they are some remix tracks of varying length. The first game's trailer says the music is "authentic cheer music", but if this is the price of authenticity, then more entertainment might've been nicer. At least the sequel has better music.

Let's continue to the gameplay, then. The player holds in one hand the Wiimote and in the other the Nunchuk. The scoring is based on how well-timed the placement of arms in the correct pose is. It feels like it is not about fluid movement but about dancing like a robot - just like the characters on screen with their weird permanent Pepsodent smiles. And if the Nunchuk is not of a wireless variety, then you'll get whacked in the face with the cord all too often and pointing both controllers to the sides is limited first by the cord length -- about the same as the NES Mini controller's length. The second game fixes this and allows the user to use two Wiimotes instead. This recognition of individual poses becomes a problem when the game starts throwing poses at the player at high frequency. I'm not sure if the poses are not recognized or if the recognition happens so delayed that I don't know that the poses were recognized.

Not quite amounting to half is the legwork. The games support the Wii balance board, but using it feels about as stilted as the Wiimote controls. Since the board may not be used for jumps like a DDR dance pad, instead, the player will stand on one foot, put a foot down outside the board on one of the four sides... and that's almost all about it.

Here are images of the gameplay from ASC 1 and 2. See the guides at the bottom of the screen in ASC 2? When playing with the Balance Board, the button prompts are mostly replaced by images of where to place feet on or around the board. I think the button combinations are tougher to put into action than using the board, but getting the moves recognized is a whole another problem. 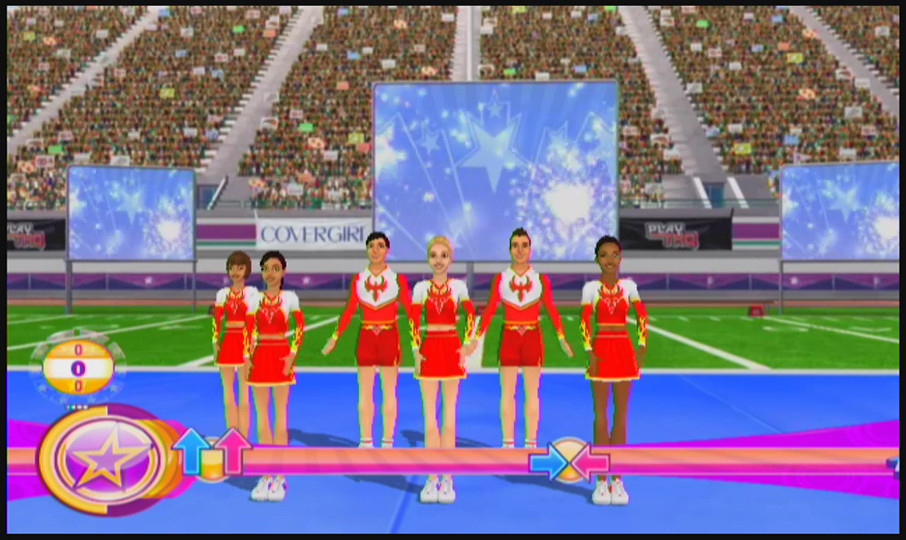 Gameplay screenshot from ASC1. The camera angles do change. 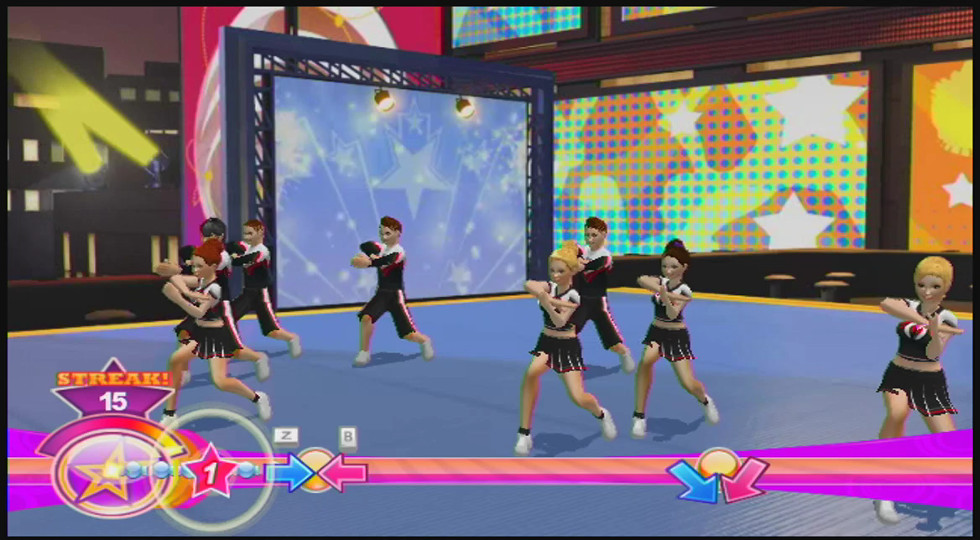 Implementation is a bit weird. The backgrounds appear to be prerendered movies on top of which only the characters are rendered in 3D. Sure, it works, but... this style reeks of Sega CD and PS1 games.

Then there are the bugs and oversights. In the first game, when using the balance board, each segment starts with the unskippable warning about using the balance board that takes several seconds. Then there's the option of replaying a round if you do badly. The thing is, the scores of these rounds are summed together in total, and if you redo a round, your score counts only the latest run. The opponents? They get another rounds as well and they keep all the score. In other words, if you replay one round in a three round match, your score is computed from three rounds and the opponents' from four. Whether this was a bug or a feature, I just don't think it was the best thing to do.

As I said, the music selection in the first game was, well, awful. The sequel has pieces I'd call songs, which still fall far from We Cheer's selection, but are still a) longer and b) only less painful to listen to.

Again, the sequel fixes the issue with the balance board calibration, which is done only once per gaming session, which helps a lot. It's still not a fun game due to how badly I think the measuring of the player's success works. I doubt I'll ever finish either game.

But there's one thing these games made me think: training.

And here we go on a tangent...

If you follow the Co-optional Podcast, you may be aware of the comparison of playing Rock Band 4 and just "pressing buttons", which originates from a preview article at Polygon. Eventually, you might find the dexterity needed to clear the songs in those games. Rinse, learn and repeat until you clear the songs, just like in DDR or whathaveyou, I think - my experience with GH is very limited and total zero with Rock Band. Either way, Guitar Hero won't really teach you to play the guitar and I doubt DDR teaches you how to dance.

A large part of the single-player tours in All Star Cheerleader games are the training sessions. In there, you'll go through the new move sequences you'll be doing in the next competition. These tutorials do not stop after the first competition - they carry on and on and on as new pose sequences are introduced. And like in Guitar Hero, you don't learn to do actual cheerleading either. These training sessions are "voluntary", but in likelihood highly recommended.

From what I recall, this wasn't much unlike Dance Central (Harmonix, 2010) and how that game let the player train the moves in different songs.

To tie the above text that I wrote a long time ago to the present, who should have previewed All Star Cheerleaders? I saw one newspaper article where a cheerleader was given the game to try out. I don't think the actual text was particularly informative from a regular gamer's point of view, but it has one very good point I agree with:

"I feel like I'm directing traffic or something," said Natalie as she swished her arms through one confusing segment.

Sure, you can take on the Lynels in Breath of the Wild (Nintendo, 2017) with a soup lid and a ladle and win, if you're good enough. But I doubt you could win, say, the final boss in Mario + Rabbids: Kingdom Battle if you used only the characters you had available at the end of the first world. Rhythm and music games, typically, don't have any player character skill progression that affects the gameplay: it's all about about the real player learning.

Then there's We Cheer, my favourite of the Wii cheerleader games (since the sequel never got a European release). Interestingly, 1Up's reviewer gave it (if I remember correctly) F, which translated on Metacritic to flat-out 0. The reviewer wrote how no one at the offices could clear the 'first' one-star song (there are multiple choices in my European copy), and someone called them out on it by videoing themselves beating a four-star song on hard. (Now I'm wondering who of the Dtoid staff I'd like to see playing Just Dance like this.) I'm pretty sure I've beaten at least three-star songs myself on hard as well, such as Eye of the Tiger, but ehh, that's a game for a future cblog.

Remember when I said above that the pose recognition comes off as spotty, especially later on in the game? How can I tell it's the game and not me? Is there a reason for the music selection in the first game that I just don't know, since I've never watched cheerleading competitions? Am I just incompetent and should be fired from games industry (if I were employed there in the first place)?

I've asked so many questions I don't have answers to. Except that yes, I am incompetent and should be fired.

Earlier this week, I asked what is the definition of shovelware. Of the sites Metacritic tracks, only three reviewed the first game so it didn't get a Metascore. The average of those scores is 59. The second game was again reviewed by three sites, this time with a mean of 66 and no Metascore.

Is this shovelware? I don't know. Even after asking the question, I don't even know what shovelware is exactly supposed to be. Greenhornet214 said that 8%+ of Wii library was shovelware. Dr. Heat O'Brien said that THQ's Wii lineup was shovelware, so that'd include both ASC games. DeScruff (Sypran) said that if there was a fidget spinner game, it'd be shovelware. (Steam already has Fidget Spinner and Fidget Spinner Simulator.) But they also said that "Games that were designed for a quick buck, with minimal cost or effort."

All Star Cheerleader isn't a bare-bones game. If it were, it wouldn't let the player design their own routines and there wouldn't be three different difficulty levels. Using prerendered background videos sounds lazy, but it does its job, I guess. Voice acting? It's got that, too, although the visual delivery of the plot was less than stellar. Using motion capture? Even if it had been cheaper than doing the animations by hand, it's still the better solution. They skimped on the music in the first one, I think, if they were looking for enjoyable gaming. The choreographies -- I can't tell if getting a recognized choreographer to do this was more of a celebrity promotion or because it actually matters, since we're way past my area of expertise here. (I may have got two Bring It On movies on DVD, but that doesn't help if they've been in my backlog for years.)