Municipality Of Broken Souls: Why SimCity Social Is Terrifying [RETROPOSTING]

Facebook games, as rule, are generally as violent and controversial as the strict rules of Saturday morning cartoons allow. After all, they need to attract as many people as possible, and one thing that Facebook isn’t lacking is skittish casual gamers, drawn from the same pool of people that provides mass for any moral outrage. When EA helms a game, the safety of its setting and gameplay rises through the roof and intto the hemisphere. That's why SimCity Social, a Facebook game still in open beta, is supposed to be as cuddly and fluffy as an elemental plane of kittens.

Once you try to look through the bright, cheerful exterior, your realize that you’re not just building a city. You’re a machine overlord vying for the attention of the lobotomized survivors of a reality-bending apocalypse. How did I come to this conclusion and how drunk am I while writing this? For the latter, I’m completely sober– this probably makes this article even more disconcerting. While for the former…

*You start off with just a hint of a township, framed by two rivers and crossed by a railroad and a road leading to a highway intersection (which is empty and adorned with blank road signs). You quickly establish your control center, er, mayor’s mansion that’s half the size of your current city.

*You are most definitely a robot or a sophisticated android. Maybe a brain stuck in a cyborg chassis. Why? Well, in order to do actions you need energy, which replenishes in two ways. This is done by either letting your integrated reactor regenerate it or by consuming batteries. Aside from that weird kid in grade school, only mechanical beings need batteries to operate. At least you’re not liquefying your citizens to feed your bottomless metal furnace of endless consumption. 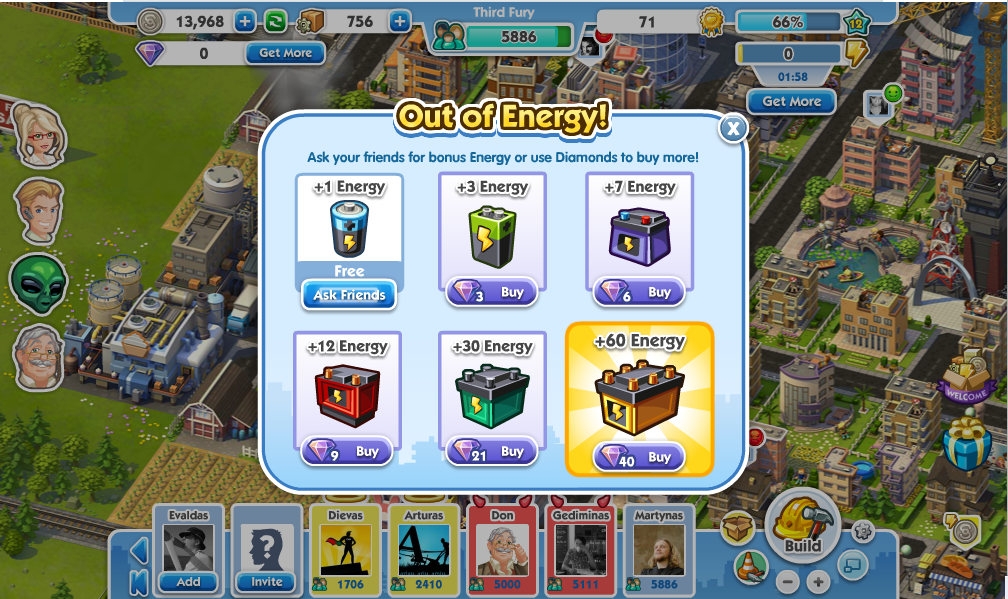 “Finally, batteries! Freshly squeezed toddler juice were starting to clog up my tubing”

*As a metallic beast, you expend your energy to build new buildings, upgrade the existing ones and so forth. Hardly any construction is done without the direct involvement of your untiring servomotors.  As various beneficial activities you do around town and its industry suggest, you have a vast databases on anything you might need to rebuild your civilization. You can test for toxicity in a chemical plant, recalibrate relay towers and sort Popsicle sticks in an ice-cream factory, then switch to fighting crime and dousing raging fires. No task is too daunting, too specialized for our Action Mayor X-5.

*Not only that, but you are also equipped with protocols for impersonating humans and carrying out sabotage. While visiting “friendly” cities (if there can be such a thing as kinship between machines), you might partake in both good and evil activities. While friendly ones are mostly on a level that would give Barney the Dinosaur sugar poisoning, the evil ones range from what a meat sack would describe as “whacky highjinxes” to covert domestic terrorism. The mayor aims for total deniability: he mixes such activities as tampering with elevators in skyscrapers, switching steering wheels in a car factory or releasing crop destroying viruses in a farm with putting lard on people’s door steps, crashing parties or scoffing at the décor . The childish pranks should make the people accept this foreign MayorBot as a lovable old coot, a rascal or, if worse crimes come to light, as someone clearly demented and broken by the apocalypse. The damage done is never enough to warrant full-scale warfare, as the calculating positronic brains running these enclaves understand that a new war might be too disastrous for the dregs of the humanity to cope with.

*Another theory might be that the droid Mayor isn’t conducting sabotage; maybe he’s just a sociopath or doesn’t fully understand how humans work. While knocking on the door and running is something simple and childish, sabotaging the alarm at the firehouse is not. What about wiping the memories of his people just because he was ordered to do so by higher AI authorities, you might ask? Piece of cake. Hell, the robot doesn’t care about his metallic brethren either: not only is he sabotaging other cities, he can also make, as a final upgrade to the toy factory, toys that are self-aware. That Barbie that Johnny is roasting in a pit? Yep, it’s sentient and feeling every painful minute of it – but who cares? Artificial life is cheap, especially since self-aware toys raise the profits of the factory by 30%. 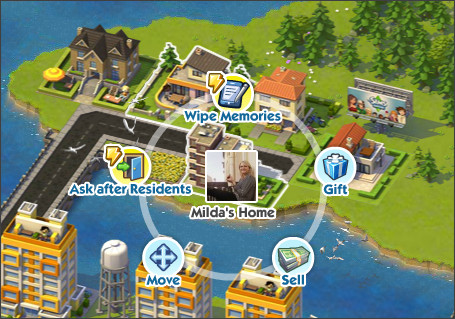 “This unit is programmed to fake remorse. I’m so sorry” *ZAP*

*Not only that, but the plaststeel caretaker can use his infamy to build new stuff. For you see, doing activities in other cities builds up his fame, which he (or, more properly, “it”) can then use to build new buildings. Of course, sometimes they require other building materials, such as… fury. Yes, this is the first game in which hubris can be translated into buildings. While the peace inclined automatons may build temples of friendship and fires of brotherhood, the more sinister erect tower of oppression, to let the masses know who or what is holding their lives in its cold, fleshless hand.

*Meanwhile, the wretched remains of the once-proud human species flock to your settlements as soon as you build housing. That would seem logical, but even more of them arrive when said housing is surrounded by various shiny bits. A simple “welcome” sign raises the number of tenants in surrounding buildings by ten, a billboard by sixteen, a plumbob monument attracts 50 new people, so does the Altar of Fire. Clearly, these men and women are so shocked by the sudden collapse of life and order that they only wish for bread and games, billboards and clotheslines, even newly planted trees that would indicate civilization.  The people are such degenerates that they accept previous iterations of SimCity as real, because there is a SimCity exhibition at the museum. Remove those shiny baubles and the citizens lose interest and migrate. That some basic instinct still exists in those walking corpses is shown by the fact that properties near water can expect to have twice as many people as those further inland and, hence, away from drinkable water.

All the eels from the bodies of those who drowned while trying to get into the city (and, later on, of inevitable dead hookers) are just a pleasant bonus.

*Of course, the machine doesn’t really care about the people’s happiness, for its task is to restore the numbers, not the soul of the humanity. Hence, new buildings and lures are unlocked and revealed in the cold brains of the android only after certain population thresholds have been met. You’ll soon have bakeries, diners, comic shops, ice-cream and toy factories springing up everywhere. Nothing to scare the people, only to entertain. Meanwhile, the infrastructure is an afterthought. Sure, you might be able to build a fire department pretty soon, but a hospital? You have to have almost 9000 people for that. Any lower – and it’s a waste of resources. Only in such numbers do health issues become noticeable, while fires can be devastating any time. Heck, you have to upgrade the police station twice just to get a detective working. What’s the first tier upgrade? Buying tasers, because it has been discovered that organics cease to function after being shot.

*At the same time, all the infrastructure and important buildings are not staffed by regular people – you have to ask the other Polis(?) AI’s to help carry out the jobs of policemen, firemen, even trash pickers in the public square. Probably through remote controlled bodies run by background processes, as one “friend” can take many positions in many different spheres. Alternatively, you can spend “gems” to hire other “people” to fill these positions. I assume gems are some sort of universal raw material, since they can be used to synthesize many things.

*Of course, the sub-AIs picking up litter and watching the man-cattle in march in the squares aren’t the only artificial helpers that the mayor has. From Kristy the Secretary to the Agent sent to investigate the crashed UFO (more on that later), you have a staff of people that are locked into and defined by the positions they take. Are they lower AIs that help you dominate your human underlings? Maybe they’re lobotomized cyborgs, sent to keep your company after Central Control deemed the suicide rate of augmented overseers a pressing problem. In this light, “checking in with Kristy” takes up a whole new, hydraulics related meaning…

“Sure, this work is mentally tiring, but that’s why They sent Kristy here. Did you know that her pain inhibitors can be turned off?”

*After all, the “M.A.Y.O.R.” (Manager, Advanced Post-Apocalypse Overwatch Robot) is faced with rebuilding one nation under God-computer in a mad new world. Aliens try to monitor all new settlements; this much can be inferred from the fact that EVERY NEW CITY has a UFO crash near its boundaries; supposedly, that’s the work of surviving killsats and laser defense batteries. What else can be found in the immediate surroundings? Magma veins, ruins from various historical periods and places (pyramids included), ponds with landlocked mermaids, burial mounds of heroes and skeletal remains of Simcitysaurus, giraffes… while the Archonbot himself can order the building of unicorn farms (to harvest their precious horns? Or, since the humans are so stunted, broken and hollow that torturing them brings no pleasure, so the unicorns are the there for the robot to enjoy the suffering of the majestic creatures by taking away that which they treasure above life – freedom?), dream factories, mind control emitters, haunted houses and giant robots. At the same time the train that runs on the ubiquitous train tracks is pulled by a steam locomotive. I know only one fictional world with such a hodgepodge of science and magic: Rifts. How did such a situation arise in that world? Tthe sudden death of most of the people in the world caused the released energy to overflow ley-lines and tear rips (rifts, if you will) in reality.

“We’ll give you all the sacrifices you want if you don’t interfere with our Plan. Allfather, does this unit have a soul?”

*And how do people cope with all this? By praying to the one true god. Well, gods, since praying only to Odin would probably upset the other Norse deities. Why would the survivors do that? Because Ygdrassil is growing in their back yard, that’s why.

*Of course, they might have to remember the old proverb of “kill the alien, burn the heretic, purge the unclean”, since a Pandoran holy tree is also present on the other side of the map.

*That is, if they have to come to it. The new rulers of humanity are working on the alien crash site, building something. Sure, they state that it’s an arcology… but tell me that this isn’t a Scrin “ascension” tower.

If someone asks about the farmers, tell them that the unicorns ate them of something.

This is a world wrecked by a mass extinction event where the Thor-worshiping remnants of the humanity are lorded over by inscrutable machine minds that want to leave Earth through mysterious, alien portals.

At least the humor is pretty good.