No Man's Sky: I Need Violence, Violence Is What I Need, Hey Hey

No Man's Sky is one of those hotly awaited games. It takes the Minecraft template - randomly generated world, aimless wandering, crafting - and ads spaceships to it. And it's common knowledge that space improves everything except shlock movie sequels. This game already starts in space, so we're on solid ground! You can fly your fighter ship, do some ship to ship stuff (combat?), and eventually you'll land on planets of variable hostility and random generation to explore them, collect resources, fight robots and do other boring surcrafting (survival and crafting) stuff, but with space ships now. All of this sound good, but really boring, and the game needs more in the way of creative violence. 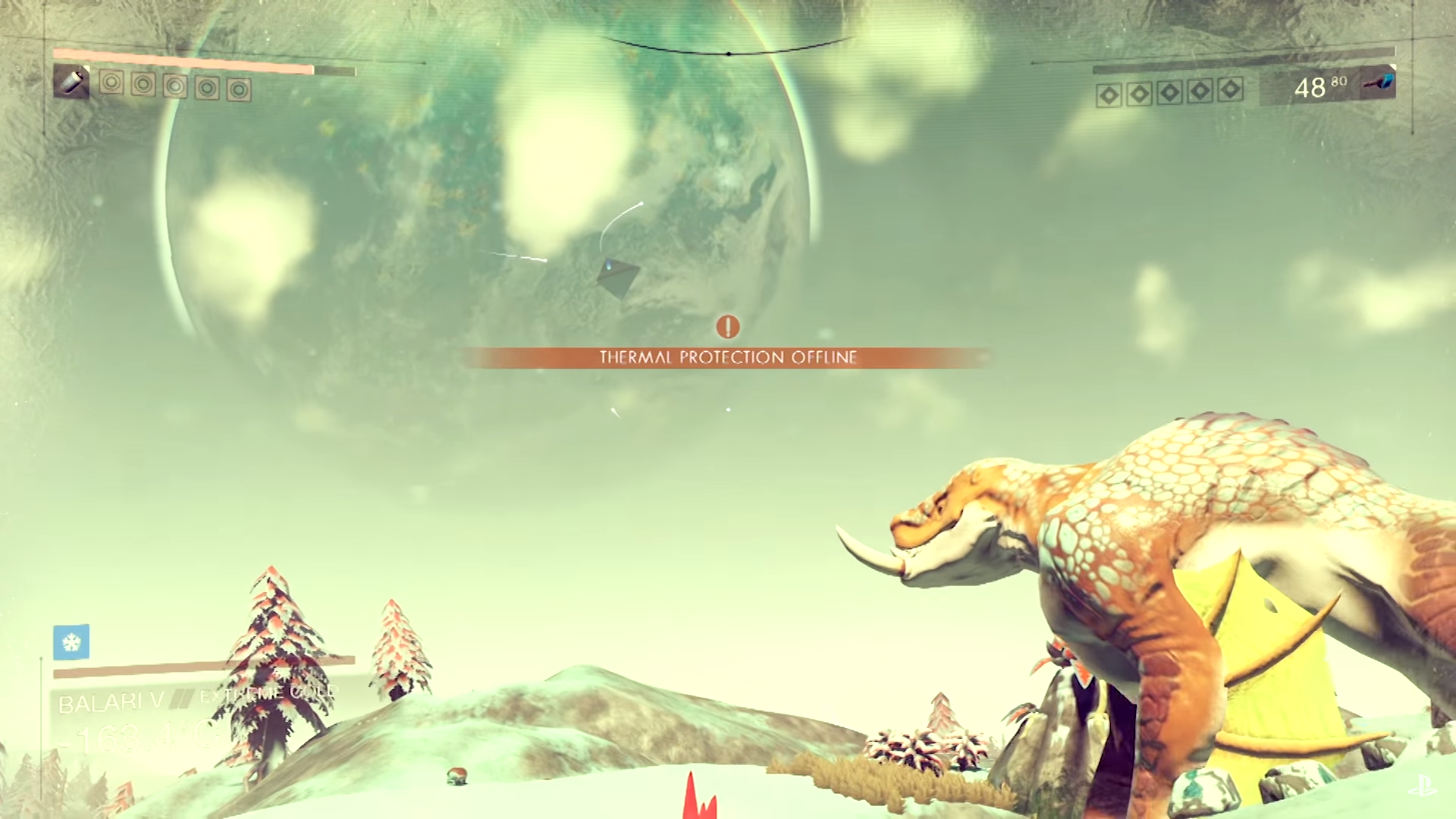 No human eye had seen that animal before, yet I already know it needs to be bagged and tagged

For starters, let's take a look at the guns in the game. Since it isn't a story-driven FPS game with RPG elements, No Man's Sky won't have a hacknyed morality system to prevent us from using said guns to shoot stuff and people (unlikely, they haven't shown any footage of people getting shot - unless the player counts). You pew pew pew at the alien beasts and mysterious sentinel robots until you collect enough resources to get some other bland plastic box that generates more pew. What we really need are some fun guns! Things that have more moving parts than it is ergonomically sound, make the loudest boom, throw solid slugs, smell bad and leave big holes in whatever space cow gets in the way. Machine guns, chain guns, shrapnel rifles that fire heated bits of chain, automatic frag grenade launchers, gyrojets with explosive ammo, antimateriel rifles that vaporize space dino heads, the works. Let me feel that I'm holding an irresponsibly dangerous piece of machinery in my hand and let me slay aliens with with a gun that's surely contributing to global warming on the planet Randombutt (mapped by 420spaceit).

One sci-fi book I had read as a youth mentioned, off hand, that people hunted some sort of alien super rhinos with APCs armed with grenade launchers. That stuck with me as just the excessive amount of violence and badass that I would want in my alien safari. Now, I'm not advocating for adding vehicles into the game - I'll be happy with Tribes power armor-like ability to fly and skate at 300km/h - but they could put upgrades on the ship to turn it into a fire base. So you're huffing and puffing around on the planet, marveling at strange rock formations ('oooh, strange!') and alien animals ('oooh, so alien!') when you come up on a horde of star buffalo. Killing them all with your kustom-mega-blasta (which features no blasters, but is basically three LMGs welded together) would be a chore, but your ship is in range, and the last upgrade you got lets you call in mortar strikes. So you lase the position of the strike, select radius, amount of rounds and wait for splash. Seconds pass and the star bufffalo start ragdolling over the country sideas they're torn apart by whatever future people are firing out of mortars. And that's just mortars, think of what better, more wondrous (read: deadly) stuff you could put on a ship! 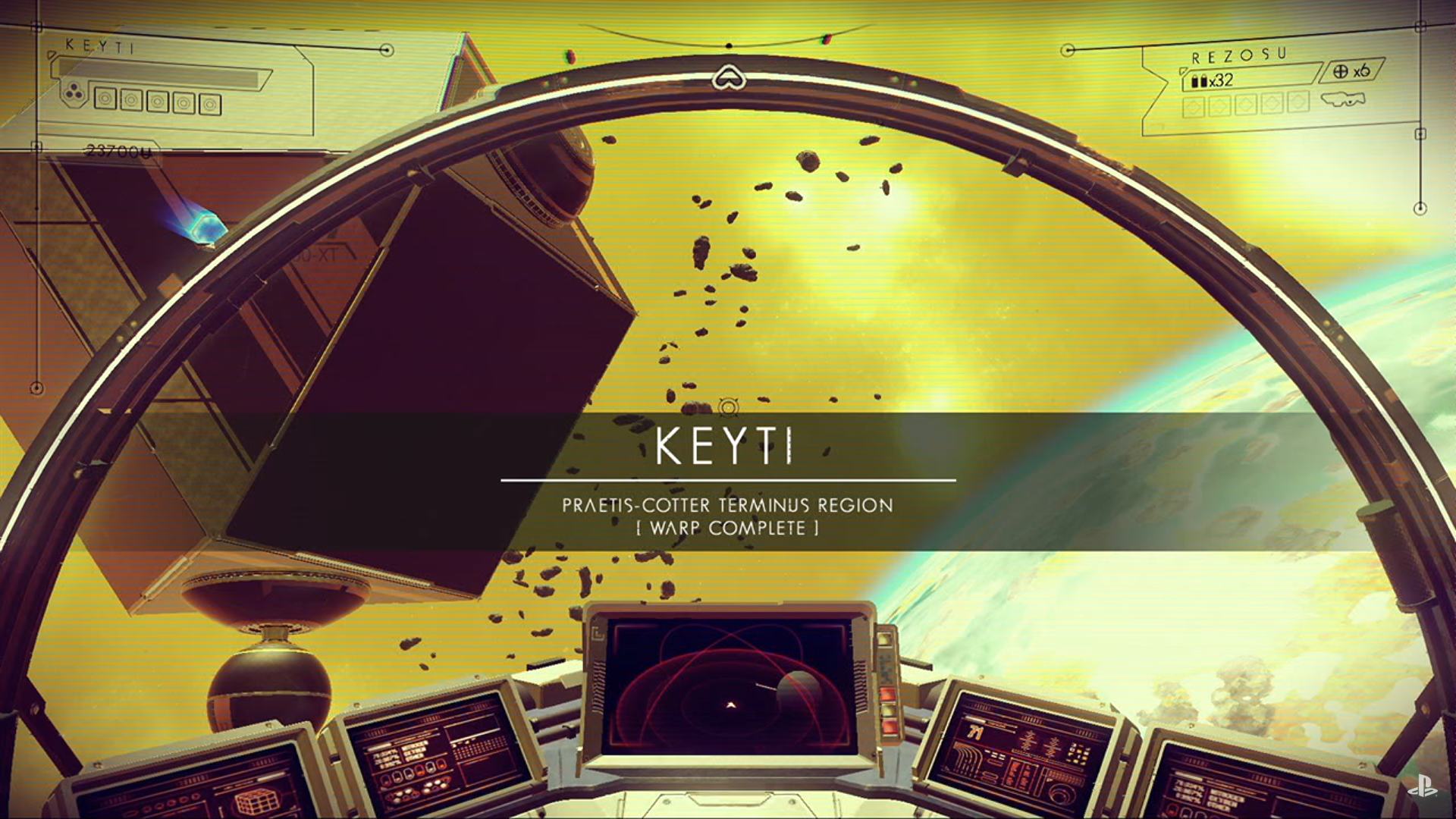 What the Hell is that thing and how do I crash into the planet?

And what about stuff you could use to cause grief while you're on the ship? At the bare minimum, you need rocket pods. Rocket pods that fire unguided frag rockets, and fires dozens of them. Drones, cosmo gazelles, more drones - what do you care if you can carpet bomb stuff from your little flying home-away-from home. As far as excessive goes, nothing can top that mission in Hostile Waters: Anteus Rising where you have to snipe an idle helicopter pilot with a gunship-mounted laser. I want something like that in No Man's Sky. I want a big, ugly, sparking railgun that would let me hunt megafauna (I also want megafauna). I want to gass any cave, grove, nook and cranny that looks at me strange. I'd be very much happy if could drop napalm on unruly xeno death fauna.

And you know what? I want to be able to hurt the planet bad. We're talking cartoony, Captain Planet-level villainy here. Planet cracking is a good way to start. I want to call in an Ishimura (sans cults or necromorphs) to yank huge gobs out of the planet, all to get raw materials that civilized planets need to keep making space dragon dildoes. I want to send robots to do open-pit mining and leave gaps that could be seen from space. If my industrial efforts could leave a planet a blasted hellscape infested by mutated fauna and survivors of failed super soldier experiments, I would be a very happy man. 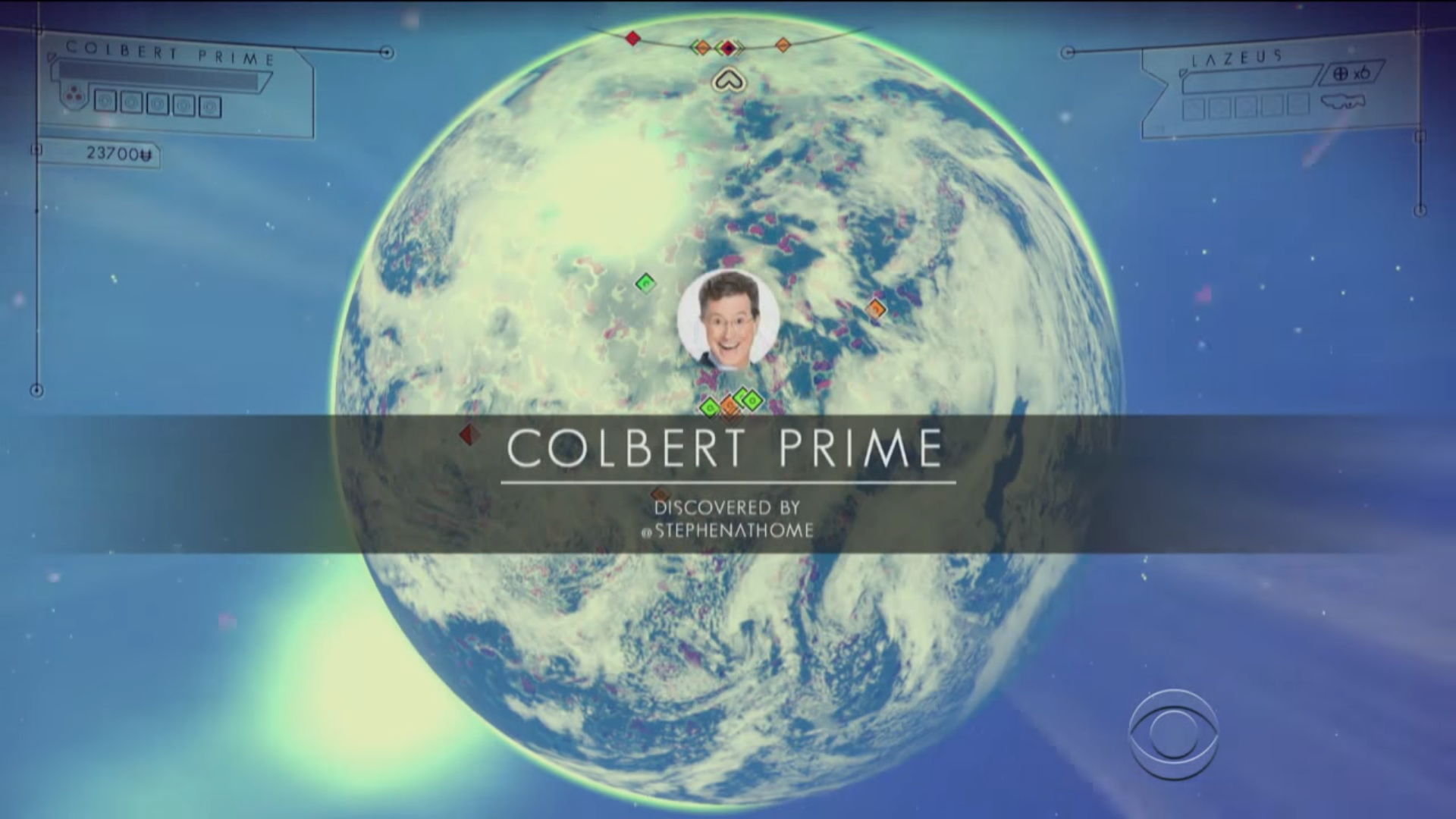 I will have my vengeance on Colbert for canceling Colbert Report!

However, No Man's Sky isn't a game about treating the universe like a pinyata filled with ores and rare earth elements. It's about crafting, wonder and exploration. And while I feel that wonder and exploration is helped by meeting different species and finding alien relics, I also think that high powered explosions as much if not more important for the space conquistador experience.