Videogames vary in length from your 60+ hour rpg type games to your sub-two hour walking simulators. Some however, come in even more byte sized packages, providing the whole of their offerings in about as much time as it takes to walk the dog, get in a quick workout, or catch another episode of House on Netflix. Enter Rot Gut, a 2D action platformer developed and published by Shotgun Surgeon set in 1920’s prohibition America where you play as an “agent” (presumably law enforcement or FBI) out on a mission to cleanse the city of its seedy underbelly. 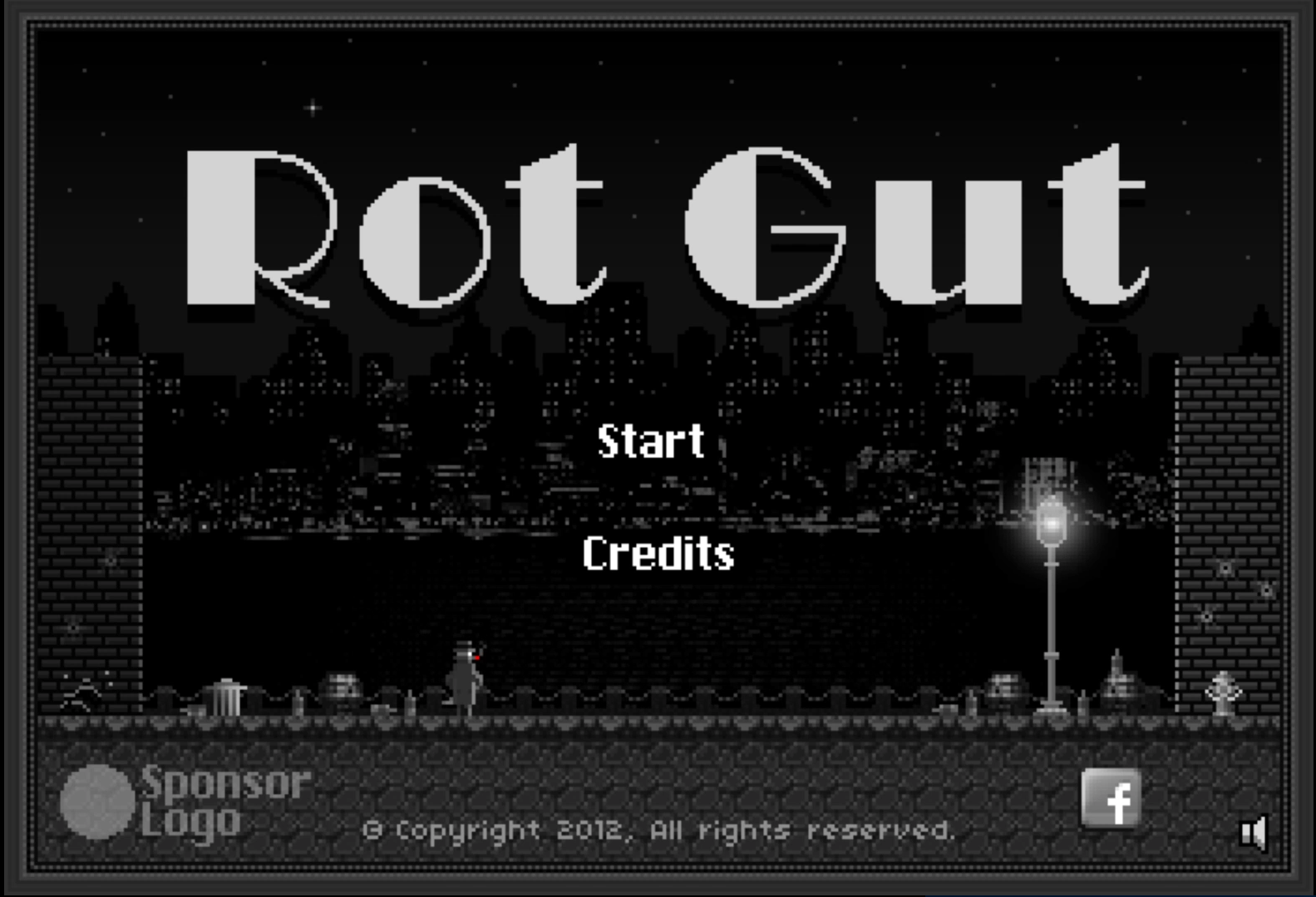 The genre of the game pretty much says it all in this case, Rot Got at its most basic level is a platformer with the added mechanic of being able to fill your enemies full of lead using one of three weapons. You run and jump over obstacles while clearing out gangsters with either your trusty revolver, the shotgun, or the Chicago typewriter (once you unlock it, that is). In order to complete the level, you must locate and pass through the exit door conveniently marked with a large glowing exit sign. Hardened criminals are just so thoughtful, aren’t they? The currency found throughout the game in destructible objects and chests can be used to purchase ammo or medical kits at vending machines scattered around each of the levels. 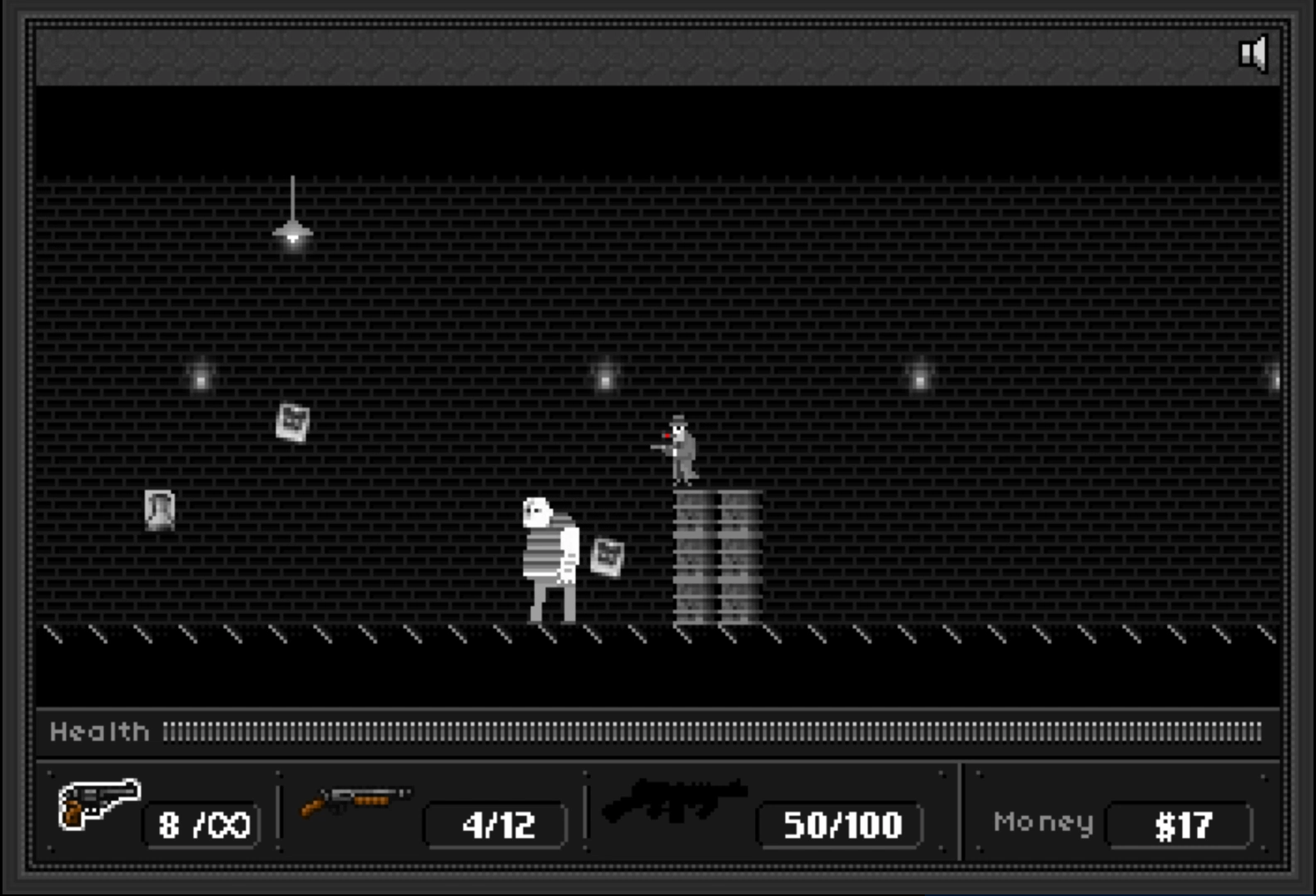 Though fairly similar in behavior, there are a variety of enemy types in Rot Gut. Some enemies plink away at you with just a revolver while others will try to get close and personal and smear you across the walls with a shotgun blast to the face. Others, such as attack dogs and the hulking strongman, will try to get in close. That being said, pretty much all of the enemies behave the same way, walking back and forth until hitting an object and rushing towards you guns blazing as soon as they spot you. Not a lot of variety to be had in the gunplay. Bosses do help to bring a little flavor to the fighting portion of the game. However, there are only two of them in the game to contend with. The levels themselves are pretty quick to get through and at least have some diversity in locale and layout.

Rot Gut uses a pixel art style that has become quite common in indie titles with the pleasant addition of a noir aesthetic, a.k.a grayscale. Well, pseudo grayscale anyway. There are little bits of color throughout the game used to accent important parts of the game such as the exit signs and item vending machines or the scattered red, mushy innards of your conquered enemies. There are a couple cut scenes throughout the game that playout similar to silent movies that serve to inject a bit of plot into the game in between levels. The only complaint that I have on the chosen art design is that it is hard to tell the difference between scenery and breakable objects at first until you accidentally break something and figure out what does and does not break. 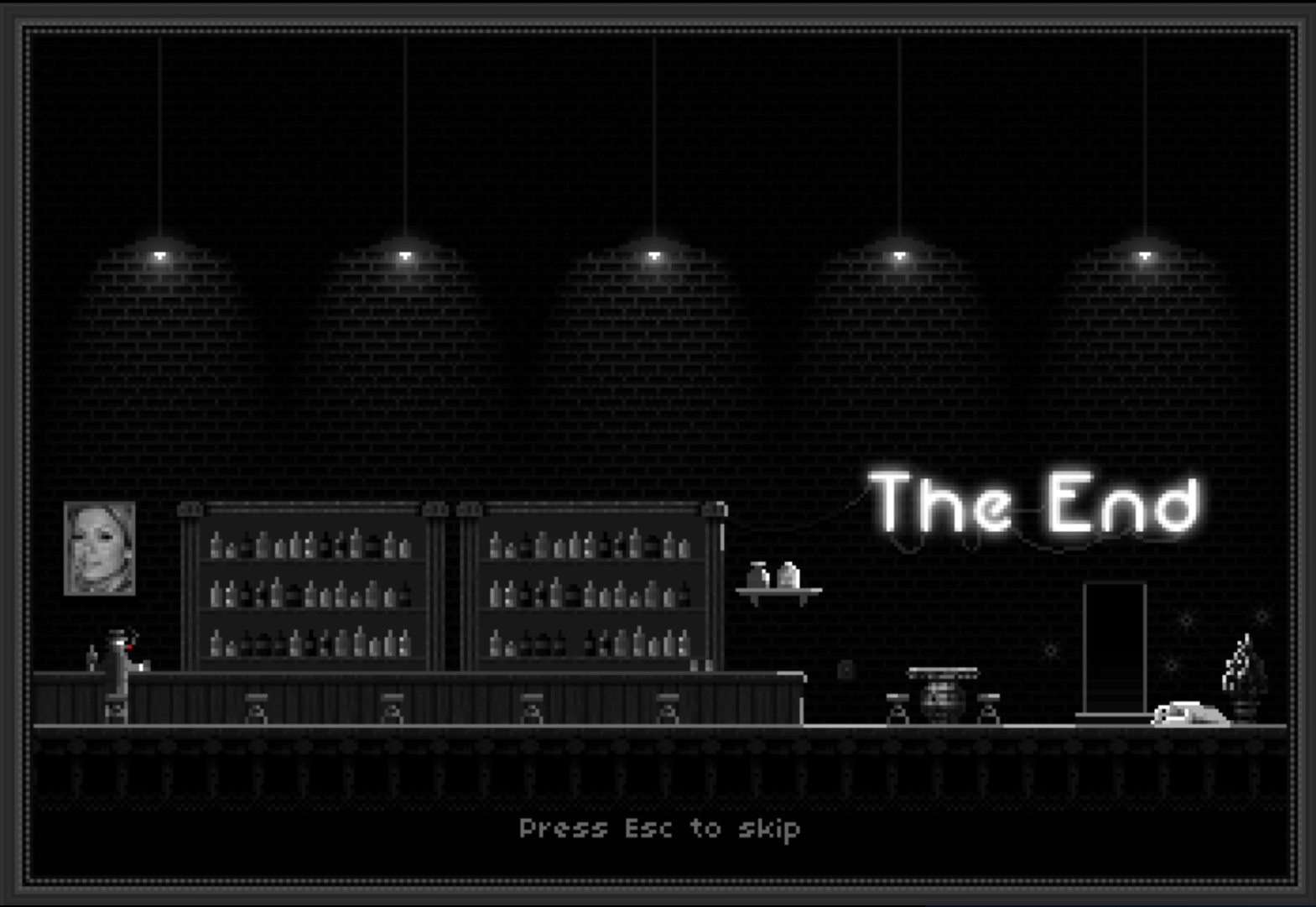 The game advertises a distinctive soundtrack filled with “an exciting mixture of chiptune and 1920’s jazz” (which may be the first time that sentence has been written in history).  I must say I can’t really pick out the 1920’s Jazz elements of the music, though I don’t claim to be a musical expert, the chiptune side of that mashup does pretty solid work. The tracks are pretty good and are very nostalgic of early NES games.

A common complaint from players with Rot Gut is the short completion time of the game, which I admit I share to some extent, coming in at just a little bit over half an hour. But is that really the worst thing? How much did you shell out to watch the latest summer block buster at the local movie theater the last time you went? Ten dollars, twenty? How about concessions? After all is said and done you probably just spent at least $10 an hour to shovel down popcorn and watch an action flick with what’s his name and the girl who was in that thing once in it. Rot Gut is $1.99 as this is written, and while it could probably be better priced at $1.00, I personally do not think that is an absolutely terrible price for what you get.