Planar Conquest Review | No Fun For Anyone

4X fantasy genre is not that barren when you think about it. You have your solid, old school leaders in Age of Wonders and Heroes of Might and Magic. You have Baby's First 4X with the Warlock series. If you want something different, you can go play Disciples or Eador. If you want something REALLY different, you can try Dominions 4 or Endless Legend. However, if absolute, mind-shattering, color-stealing blandness is something you wish for, look nor further than Planar Conquest!

Before it was called Planar Conquest, this game bore the name of Worlds of Magic. It was not a good by any stretch (unless that stretch is "it works"), and I hated every minute of it. However, it's not the first repackaging of a fantasy 4X that I have seen in my life. The shockingly unfinished-at-launch Elemental: War of Magic was remade into The Fallen Enchantress. It never reached the heights promised by the hype, but it looks like it had a life of sorts. But even the original incarnation of it was more interesting than Planar Conquest. Having played both releases of the gameI struggle to tell the difference between them. The developers might have changed a few menus and done some behind-the-scenes tweaking, but nothing mindblowing as far as I can see. The rest remains as achingly boring as it ever was. 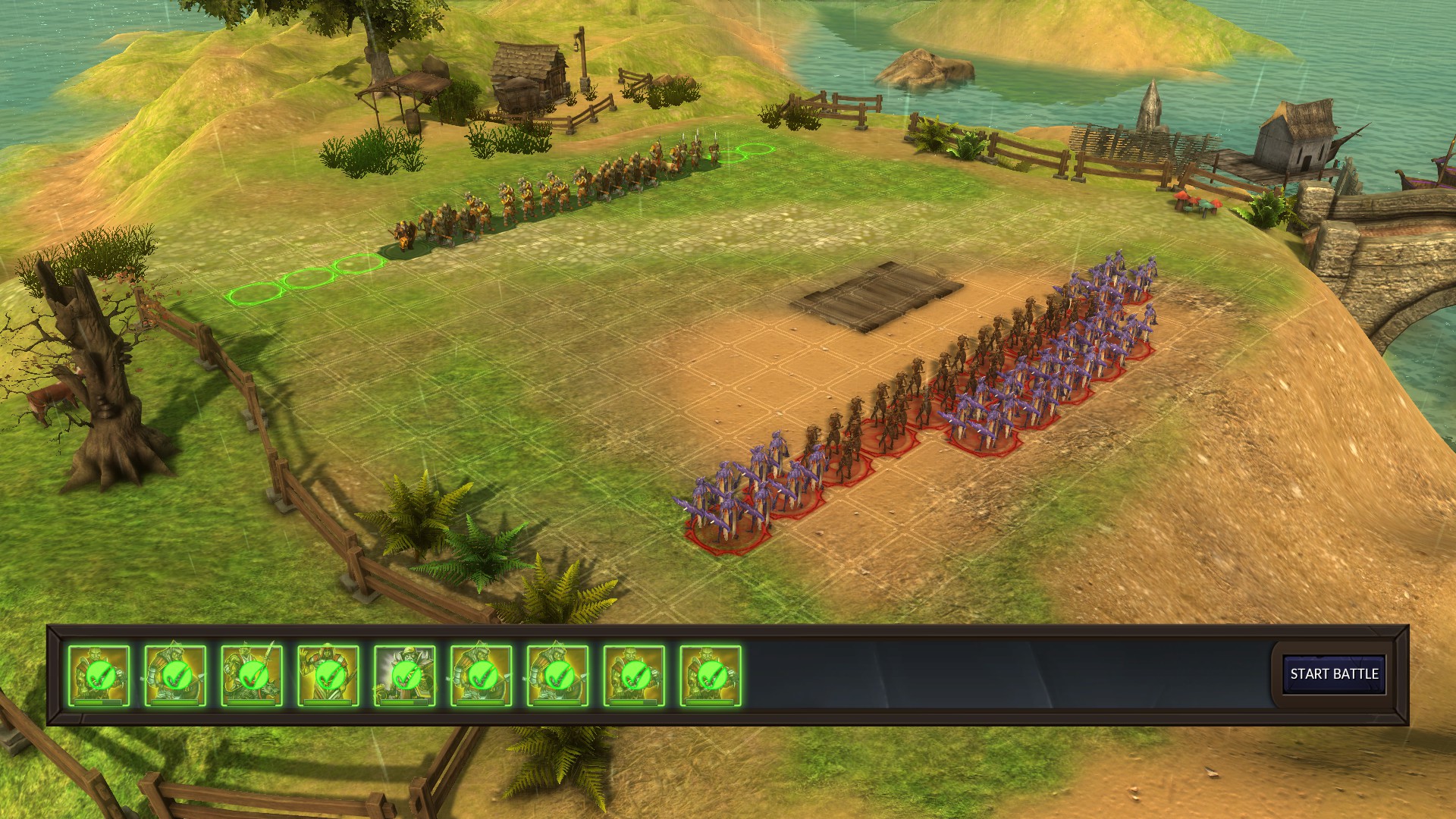 A battle so epic that I barely contained myself from uninstalling the game.

Does this mess have a plot? Few 4X games ever do: after all, the charm is in the endless hours spent placing farms on a randomly generated world map. At best, 4Xs have a setting. And Planar Conquest has a boring slideshow intro inform us that the gods have abandoned the world (possibly for a better game), so the wizards are out and about fighting and trying to carve out a piece or it for themselves. Also, some sort of super undead are coming, and it's bad. And that is really all there is to it. If it got any more bland and unspecific, it would magically transform into a mobile game. I think I have seen flash games on Newgrounds with more original, well developed worlds.

But back in Planar Conquest, you get to choose between a randomly generated map campaign (a la Civilization), or Battle Arena that skips all the tedious civilization building in favour of showing off lacklustre combat. The first thing you do when generating a world is choose what planes will it contain: Prime is your regular Medieval Forestland, followed by elemental realms that are better for production of some things and worse for some others. You can also choose the landmass type and percent of coverage - you can make a Water plane with that's 90% a pangean continent, yes. You can also screw yourself from the get go, as you can guarantee that your spawn location will be a teeny tiny island surrounded by lakes of lava. Have fun trying to expand! Once you're set with your interdimensional prison of woe, you get to choose a race you want to play (out of several of fantasy staples, and non-creepy crawly bugs), but I can't say that they make the game meaningfully different (except for the flying dragon troops and dark elven dominatrixes that heal themselves while whipping their foes). You also either select or custom-build your mage character. Since you are not bodily present in the game (unlike in Dominions), it has some affect on your realm, but is mostly concerned with magic. Despite the multiple branches of magic, the whole system is not at all exciting. 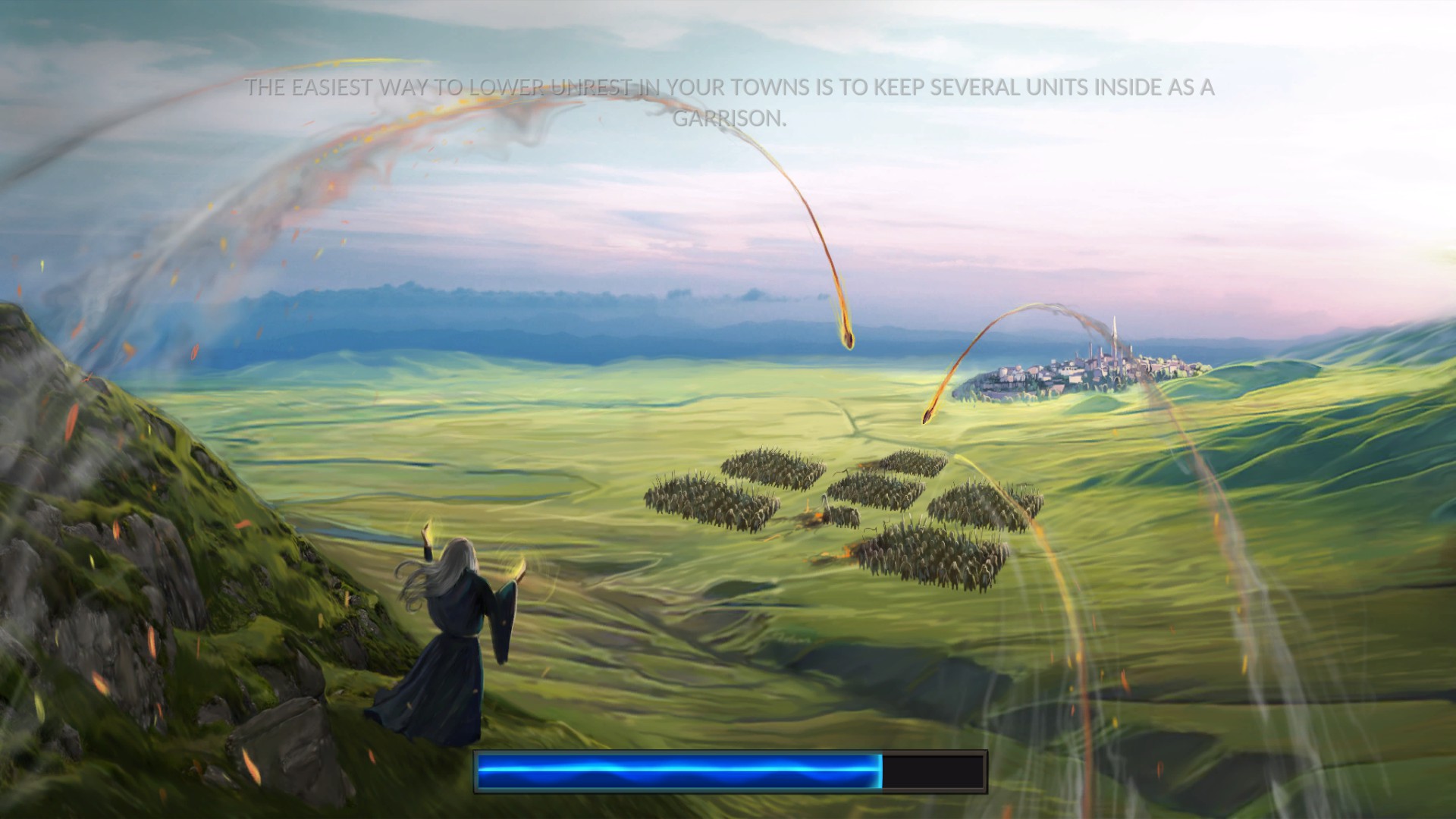 Congratulations, you have started the most boring adventure of your life! You now have a city (barely distinguishable from the cities of other races) in the middle of the flattest, most boring plain of any game I have ever seen. Yes, tiny hills can be found here or there, as well as swamps and rivers, but the map itself looks boring as hell. It's also dotted with various structures, which your army can interact with and be slaughtered by the defenders, all in the pursuit of treasure. There's a wide variety of these world map structures, and none of them are interesting. Plus, your autoexploring ghost spirits (every mage knows this spell, because exploration would be hard otherwise) will ignore them, only collecting treasure boxes. About the third of the time those boxes will have experience points which are totally wasted on the ghosts since they are never meant to go into battle.

Not that going into battle is anything remotely fun or interesting. It's amazing how you can innovate into making the classical "two armies start at the opposite ends of the field" boring. Much like games of Warhammer, all battles result in a brawl somewhere in the middle of the smallish map, and it's immediately bullshit. The game runs on a system that relies on secret dice rolls for damage, defense and other stats, and the interface is bad for checking up on the numbers involved. So you don't know what anybody is capable of (flying units, which your melee fighters can't touch unless it's during a counter attack, aren't even flying in place) and even if you're somewhat conscious of the abilities of your units, the dice rolls still make fightng wildly unpredictable. At least with the early game units, a unit can get wiped in a turn, and that's without concentrated attacls. So much for those experience points! Couple this with the fact that you can't buid buldings and train units at the same time (something that even some space faring civilizations can't figure out), the early game is spent puzzling over training a few more units of chaff or construting an another structure of nebulous worth. 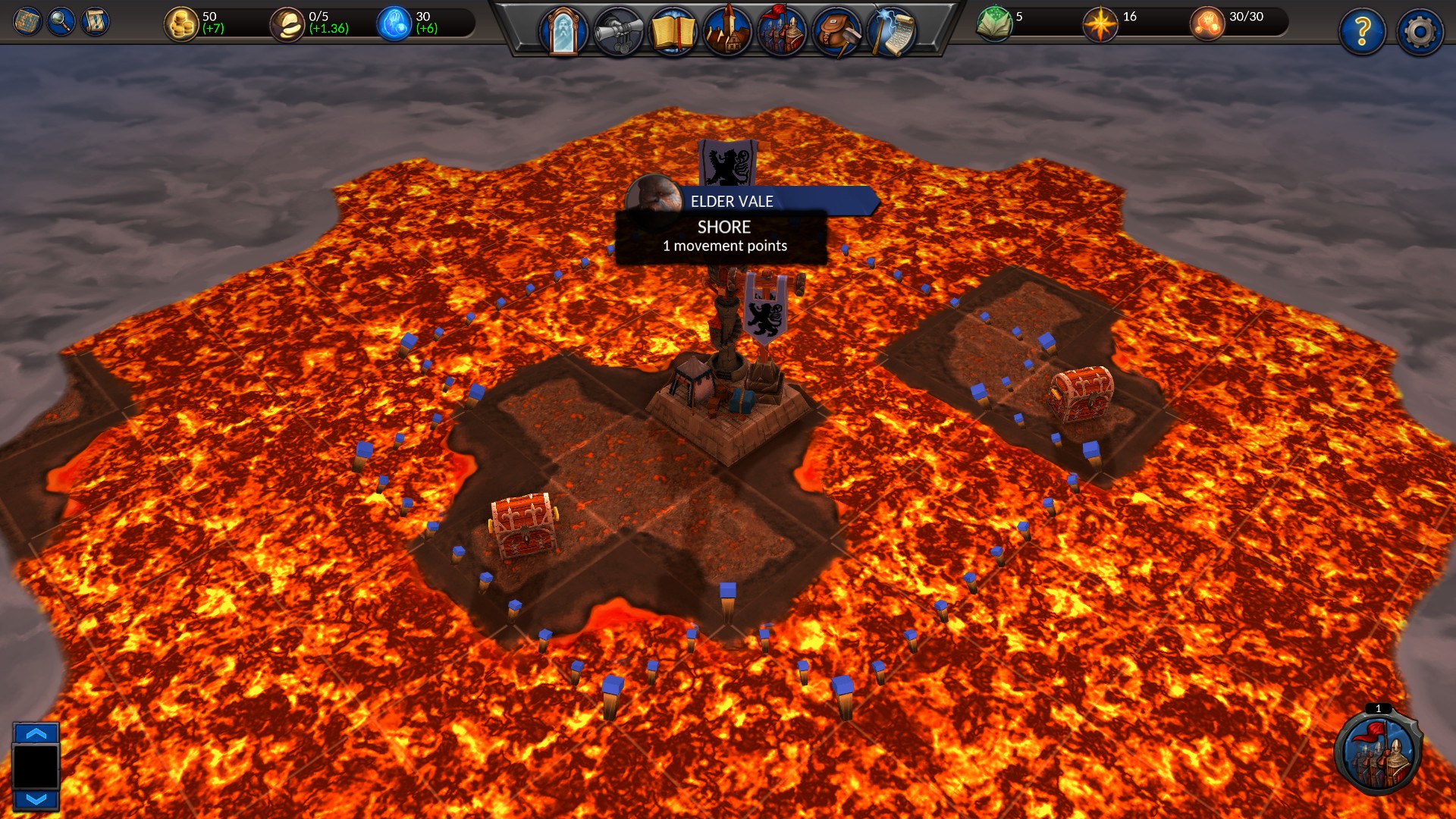 Sure is an awesome starting position

The city management follows suit in being devoid of fun. The building chains are mostly the same for all of the races while also not doing anything interesting when built (unless you like the super goofy palisades surrounding your town on the world map). Now I know that 4X games aren't exactly working themselves to death to make settlement management exciting, but here it's somehow worse. I am seriously more hyped to build a granary in Civilization III than any building in Planar Conquest. Sure, you can try to think about what you need to build (sawmills are naturally more important to cities that have trees around them), but the game's pervasive lack of being interesting catches up and you just give up. I had more fun magicing up cities in Warlock 2!

Magic isn't terribly exciting either. There's magical research, and magical budget management of spell power, mana and reseach points, and even spells that can be used on the campaign map. And again, I fail to muster any will to care. The effects on the battlefield look and feel bad, and it's no more enticing on the world map. I just selected the next fastest to research spell without caring much. You'll likely have enough mana for your needs (except for battle maps, which curtail your resources to prevent, say, chain lightning spam) because your autoexploring ghosts will on average run into three chests per turn and at least one of them will have some mana inside. Oh the joy of clicking prompts away. 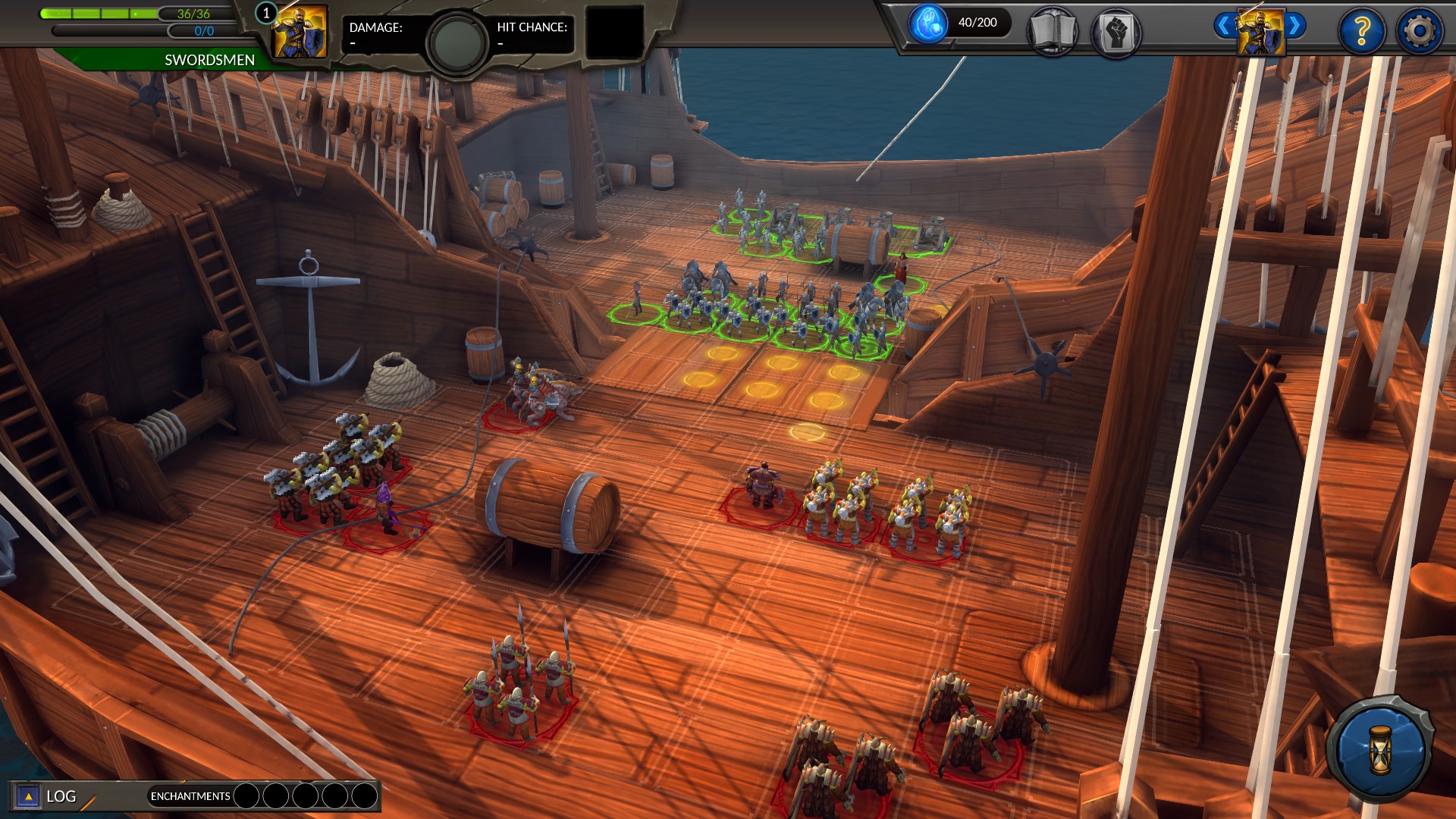 This battle taught me camera controls (the starting camera position has the enemy side obscured by parts of the ship) and that the "catapult firing" animation is not synchronized with the "rock flying off" animation.

Maybe the game's secret of not being fun at all hides in it's visual side? The 2D art is generally competent, if not exciting, and the interface could use some work to make it more clear and easy to use. However, the 3D graphics are some of the blandest stuff I have ever seen. Now, nobody will ever claim that Warlock 2 or Eador are shining gems of 3D modeling and texturing, but none of them looked this level of unimpressive. The visuals aren't just mobile-game bad, they're super bland and boring. It's really hard to explain why, you have to see it (please don't) to get it. The audio is incredibly tedious, too, with repetitive songs (I would know a thing or two about that, what with only getting sick of Endless Space sountrack after a seven hour session), none of the unit barks that make a good strategy game work and magic effects that are closer to a wet fart. Planar Conquest also has the dubious honor of being the only 4X game I can remember that has bad controls!

Fantasy games should make us feel the magic and the might of their worlds, and 4X should quench our thirst for expansion and conquest. Planar Conquest does none of those things. It just takes up HDD space where better games could reside, giving nothing in return. Any and all of the other games I mentioned in this article are better (yes, even the new Heroes titles) in scratching that particular 4X itch. "Functional" would be the only good word I could spare this title. The only game that Planar Conquest surpases is Polaris Sector, a space 4X that didn't deem it necessary to give us an autoexplore command.