That game you might not know about - Shin Megami Tensei: Nine

Shin Megami Tensei season is in full swing, what with the US and European release on SMT x Fire Emblem game Tokyo Mirage Sessions #FE on the 24th June. Most fans of the series are also on tenterhooks waiting for the release of Persona 5, due Valentine's Day 2017 in the States (Europe remains impatiently tapping its foot). You may have even recently dug into the back catalogue for even more SMT goodness, with games such as SMT III: Nocturne/Lucifer's Call and Persona 2: Eternal Punishment being available on the PlayStation Store and Digital Devil Survivor 2: Record Breaker being a not too distant memory on the 3DS.

However, there is a murky layer of SMT history that those who have not done their research may not be aware of. Gather round, children - it's time I regaled you with the story of how Microsoft failed to penetrate the Japanese market, and thus the first attempts at popularity for SMT on the Xbox were thwarted.

The original Xbox console was released in Japan on February 22, 2002; it was the newbie on the market, fighting against 2 home-grown behemoths in the form of the PS2 and the Gamecube. In hindsight, you could argue that even a big name such as Microsoft didn't stand a chance. It performed notoriously poorly, with one week in 2004 seeing four times more PS1 machines sold than Xboxes. It started a trend of Microsoft consoles not doing so well in the NTSC-J market, though the Xbox 360 picked up a little. However, until that trend emerged, hopes ran high that the Xbox would be the fresh console to develop for, particularly in the wake of the demise of Sega's contributions to the console market, the Dreamcast having given up the ghost not long before.

As a result, there was not so much evidence around this 2002-2003 stage to warn off Japanese developers, and true to form Atlus decided to develop an RPG for the console, titled Shin Megami Tensei: Nine. The unpopularity of the Xbox had a knock-on effect on Japanese sales for the game, and despite the very little sense that this circular reasoning makes, Atlus logic dictates that this would torpedo any hopes for a release in the West. Aside from some localisation issues, Persona 2: Innocent Sin saw no Western release precisely because at that stage Atlus USA was relatively small, and thus could not afford to take risks on games that were not necessarily a big draw for the consumer. This led to them putting all their eggs in one basket in the US market with Persona 2: Eternal Punishment. Atlus has a track record even nowadays of staggered release dates, Europe usually getting the raw end of the deal, and simply not releasing games in certain markets; non-SMT release Hellnight never saw a US release, and Devil Summoner 2 was never released in Europe, digitally or physically. So, Atlus has a history of caution and "waiting and seeing" when it comes to releasing their notoriously difficult and very dark JRPGs, and Shin Megami Tensei: Nine lost out to this technique. 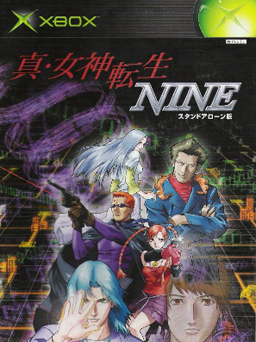 The timeline of Shin Megami Tensei: Nine's release is rather curious; it was the mainstream SMT game that directly preceded SMT III: Nocturne, the series' arguable breakthrough in the West but also arguably one of the least accessible games in the roster. Nocturne is currently ranked according to GameFAQs as the 7th hardest game on the PS2, and it involves a lot of solitary wandering around large yet oddly claustrophobic areas. SMT III was in many ways a continuation of the original art style, with Kazuma Kaneko taking on both the demon design and the character design (in Nine he only designed the demons). 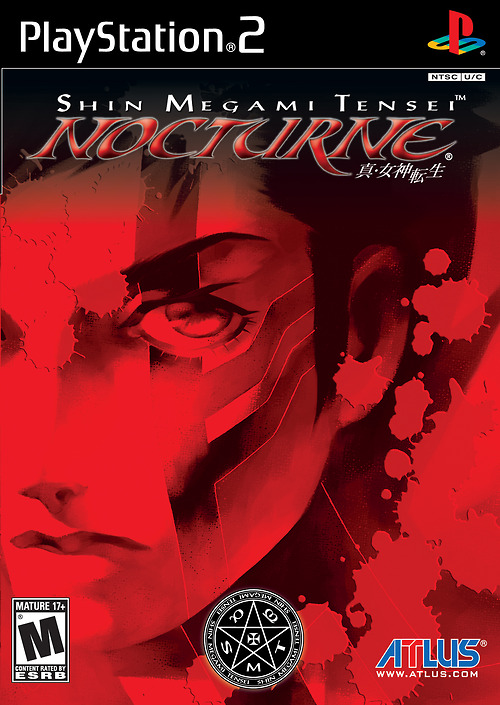 So, how does its "big brother" compare? The answer seems to be: not favourably. I could not get hold of a Japanese Xbox, and I would struggle to navigate through a Japanese language RPG, but looking at footage shows how steep the advancements were between NINE and SMT III. The art style is clumsy and freakish, but not freakish in the stylised way that adds a creepy vibe onto the other games in the series; it looks like a programming exercise gone wrong. Since SMT games are at their core about humans or humanoid figures watching society around them disintegrate, it's hard to take any of the struggles seriously when you appear to be watching an apprentice cartoonist's attempts at putting together something for Saturday morning breakfast television. The NPCs appear to move around awkwardly; it visually looks gawky. It just doesn't quite work and the word I keep wanting to return to is "clumsy". This applies to the cutscenes too, which look blocky and washed out. Even considering the era in which it was released, it simply doesn't measure up in terms of visuals - it doesn't even measure up in comparison to PS1 era games, such as the original Persona or Persona 2: EP. At least the lower quality graphics there didn't look out of place.

A synopsis of the storyline is available online, but to avoid spoilers I won't describe it here - it suffices to say that it is relatively standard SMT fare, with the Law/Neutral/Chaos routes featuring. The soundtrack doesn't quite match up to the excellent scores particularly of the later games, which is probably a big draw for a lot of newer players to the series; Digital Devil Saga's battle song is very memorable, as is the revamped intro music scenes for Soul Hackers and Personal 2: EP, not even getting onto the widely celebrated soundtracks for Persona 3/4. Music is important to SMT games, and it's lacking here.

So, the conclusion is that it is less of a hidden gem and more of a hidden pretzel retrieved from under the sofa cushions: you might want to bite down on it but you're taking a risk it's gone all soggy, mushy and mouldy. So, what is its legacy?

Well, SMT Nine was supposed to make way for a more online SMT experience, and indeed it succeeded in part. SMT: Imagine, an MMORPG arisen from the ashes of Nine's scrapped online mode, even saw a Western release, and the servers remained open for 4 years. In Japan, the servers were open until May of this year, meaning the game had been online over there for 9 years. Granted, Final Fantasy XI dwarfed this figure by an extra 5 years, but 9 years of supported service in spite of outdated graphics and the game's relative obscurity is quite admirable.

So, a clear positive that can be taken away from Nine is that it allowed SMT to branch off into a new genre and try out new things, with some success. Experimentation can be a good thing; however, I wouldn't recommend you dig out a Japanese Xbox and find an import copy of Nine anytime soon. If you want something different from TMS or the newer Persona/SMT games, I would perhaps recommend the Digital Devil Saga series in terms of difficulty and storyline; copies tend to run quite cheaply on eBay (at least German eBay - I grabbed the 2nd game for 7 euros including shipping), and they are available on the NA PS Store for $10 apiece.