Bloodstained: Weighed Down by the Baggage of Castlevania 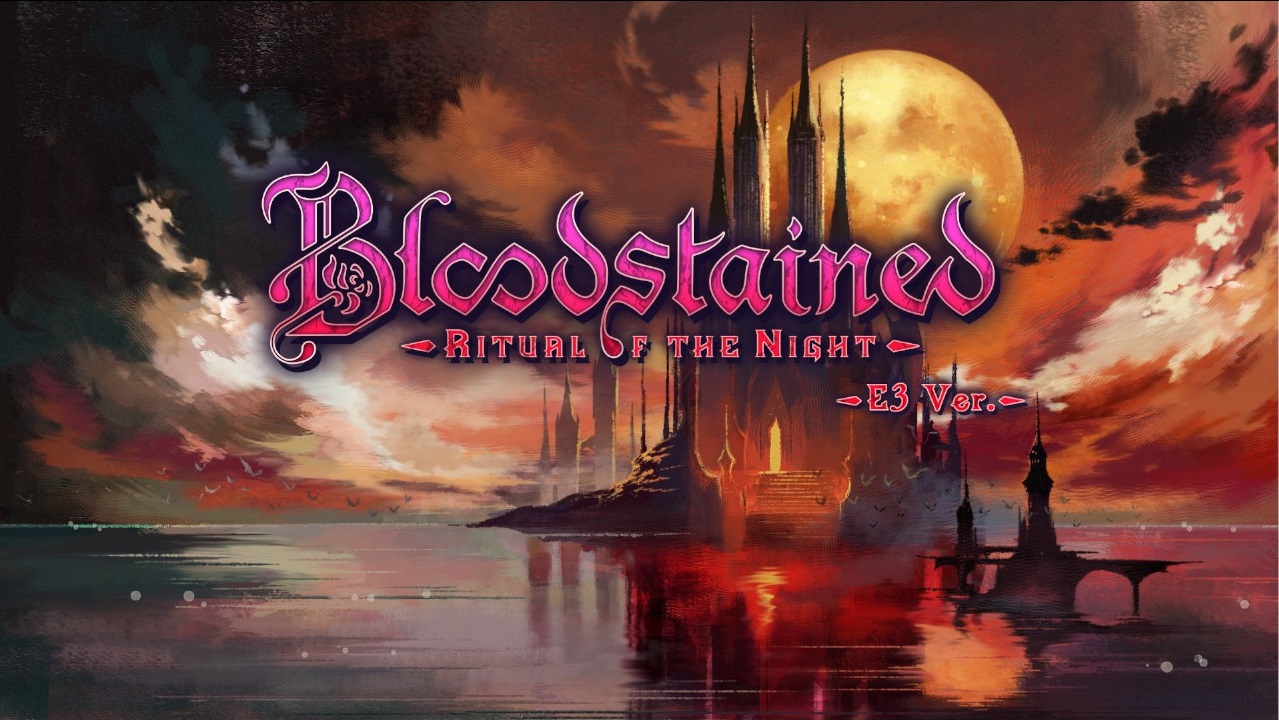 Kickstarter has been great for developers launching spiritual successors to their dead franchises. While they may not be able to continue the beloved worlds and characters these series offered, they can at least keep working with the core design and bring the fans with them. It also acts a fresh start – letting developers experiment and create new elements without being tied down by franchise expectations.

In the case of Koji Igarashi's Bloodstained, it's unabashedly Castlevania to an extreme. 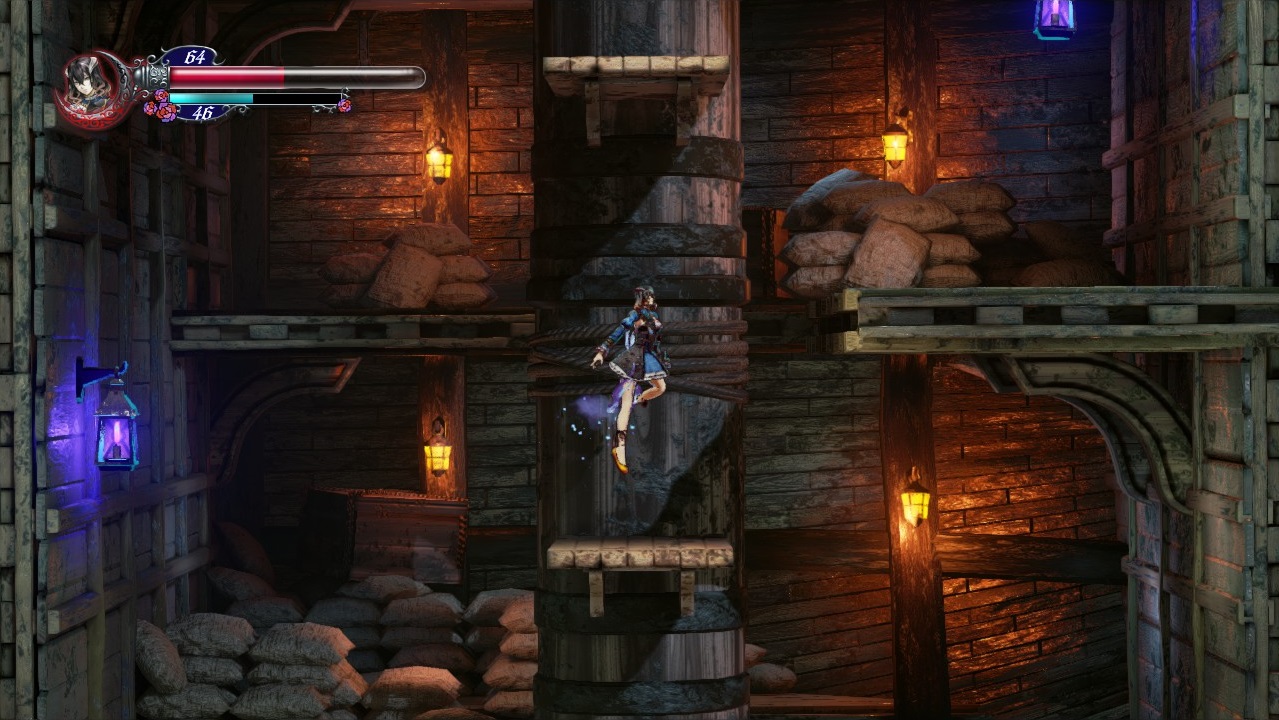 As expected, mechanically the game follows closely to the 2D Metroidvania entries produced by Igarashi. It's platforming action with a loose feel that gives the player a lot of control in their movement to help facilitate exploration. While hard to gather from an E3 demo, there's also the promise of a large variety of equipment to find throughout the environment. This is how it should be with this style of Castlevania and, considering this foundation is what Kickstarters supporters paid for, heavily altering it without previously stating so would likely aggravate backers more than please them.

Losing the Castlevania name leaves gaps in Bloodstained's core design. Castlevania was a series infamous for its excessive recycling of enemies, graphics and concepts. They tried to take a step away from these tired elements in later installments, but found limited success due their constrained development resources.

Without Konami's backing, much of this content had to be, and still has to be, built anew for Bloodstained. It's an opportunity to rework the franchise baggage. Although the E3 demo gives the impression that, instead of asking what else could fill in these gaps, the team is simply copying the same content as before. 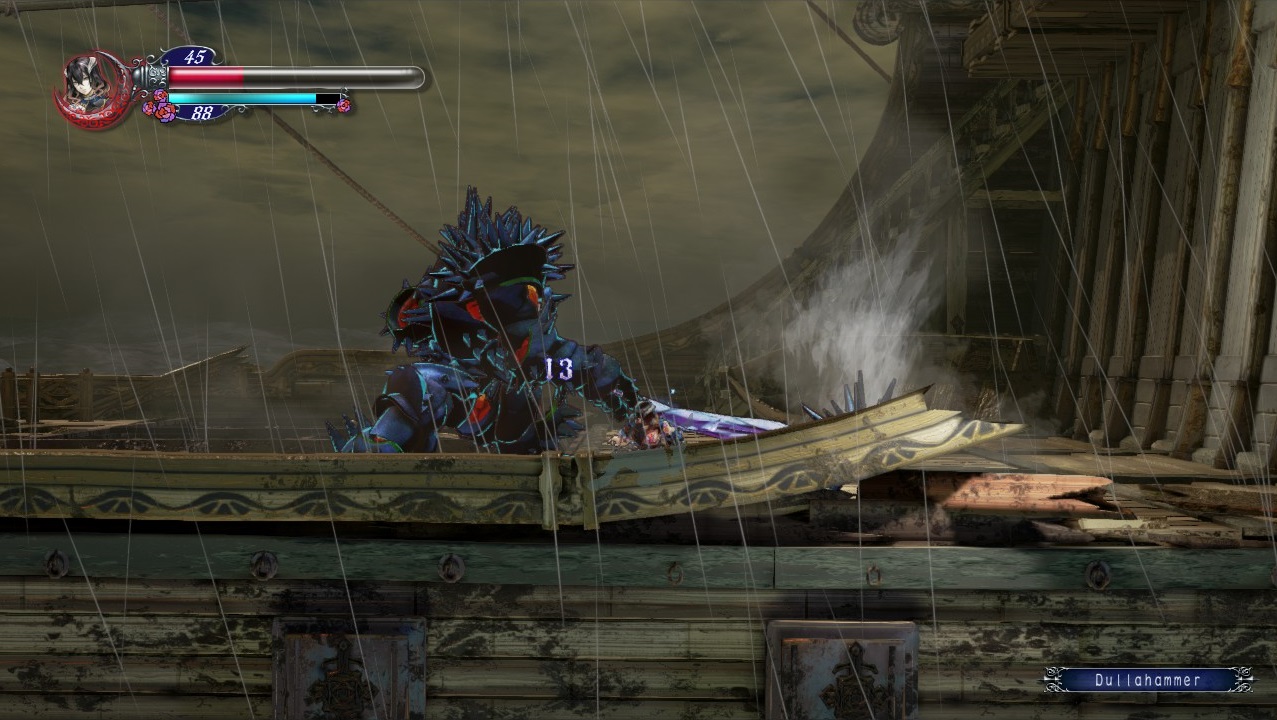 The design of the enemies in this build are the most apparent offenders. Typical fodder can be excused. You can only do so much to make a punching bag interesting. Yet, every other foe can have a direct line drawn to one in Castlevania. There's still that flaming wheel with an animal head that rolls around, pillar-like enemies stack on top of each other and shoot fire balls, and large stationary ball-and-chain style weapon wielders have an uncannily familiar attack pattern.

These may seem like general enemy concepts any title can use, but each acts near identically to their counterparts in every 2D Castlevania since 1998's Symphony of the Night. Or if you want, you can go further back to many 16-bit entries and find them aswell. The ball-and-chain enemy, specifically, even has nearly the same death animation.

What you won't find from Symphony of the Night is Bloodstained's crystals. These give the main character, Miriam, special skills taken from enemies. Symphony of the Night had a limited magic system, which featured special attacks and some spells. All-in-all, the focus was largely on weapon variety. There are only so many types of melee weapons to implement, so crystals free up that restriction. It allows for a variety of attack types related to enemies' designs and traits. 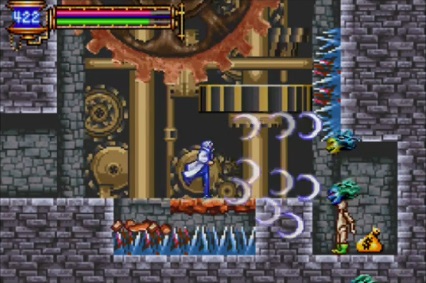 It's a really refreshing approach from the sword-heavy Symphony of the Night... At least that's how I felt back in 2003 when this same concept was introduced as the “Tactical Soul” system in Aria of Sorrow for the Game Boy Advance. It also has already been reused a couple of times. It acted as the core mechanic in 2005's Dawn of Sorrow and 2008's Order of Ecclesia.

If you've only played Symphony of the Night, I think you'll be plenty satisfied with what Bloodstained is promising. Looking at Castlevania as a whole though, it leaves the big question of exactly what Bloodstained has to offer beyond the series' status quo since 2003. The E3 build offers one possible answer: directional attacks.

Using the second analog stick, the player can aim powers from certain crystals. This offers an alternative from the usual jumping and attacking to hit out-of-reach enemies. Direction-specific moves aren't necessarily new, but previously none of these solutions were dynamic. 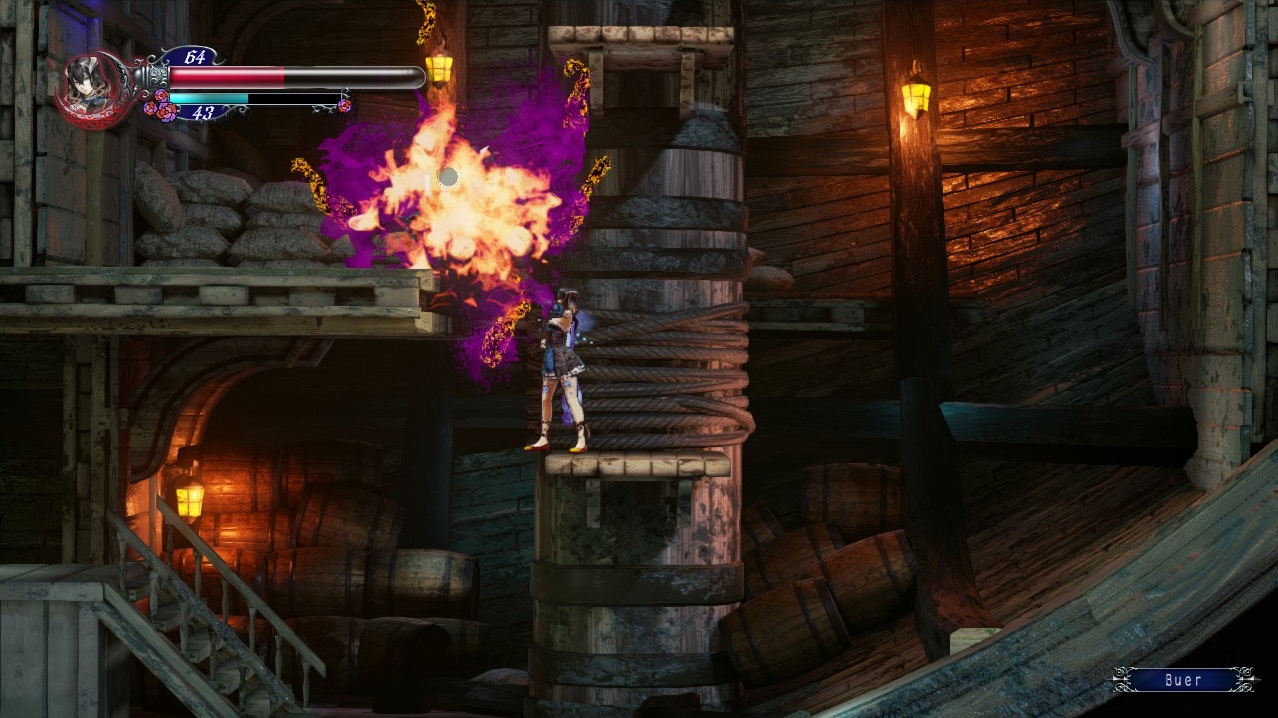 Bloodstained allows the player to aim 360 degrees around themselves. In the E3 demo, the crystal presented for this is a fireball. It's nice for hitting awkwardly placed foes, but doesn't present or hint at the potential for this feature. If it's simply used as an aim-able attack, convenience is all it will likely amount to.

I lied a bit earlier. Super Castlevania IV on the SNES also allowed for directional attacks with the standard whip. Yet, it rarely embraces this in the level design. They simply made a standard Castlevania game and threw this handy attack on top of it. It's a cool mechanic that, unfortunately, undermines much of the challenge.

I can imagine Bloodstained allowing for on-screen elements that the player can control separately from Miriam, or something like a spells that has different effects depending on the direction it's fired or what it hits. Maybe, like, freezing over a floor while alternatively being able to use it to frost over enemies. It's also promising that Miriam can still aim while moving. In the case of the E3 demo, she stops in her tracks every time a fire ball is shot. However, I'm holding out that there may be some crystals available for use while in motion. 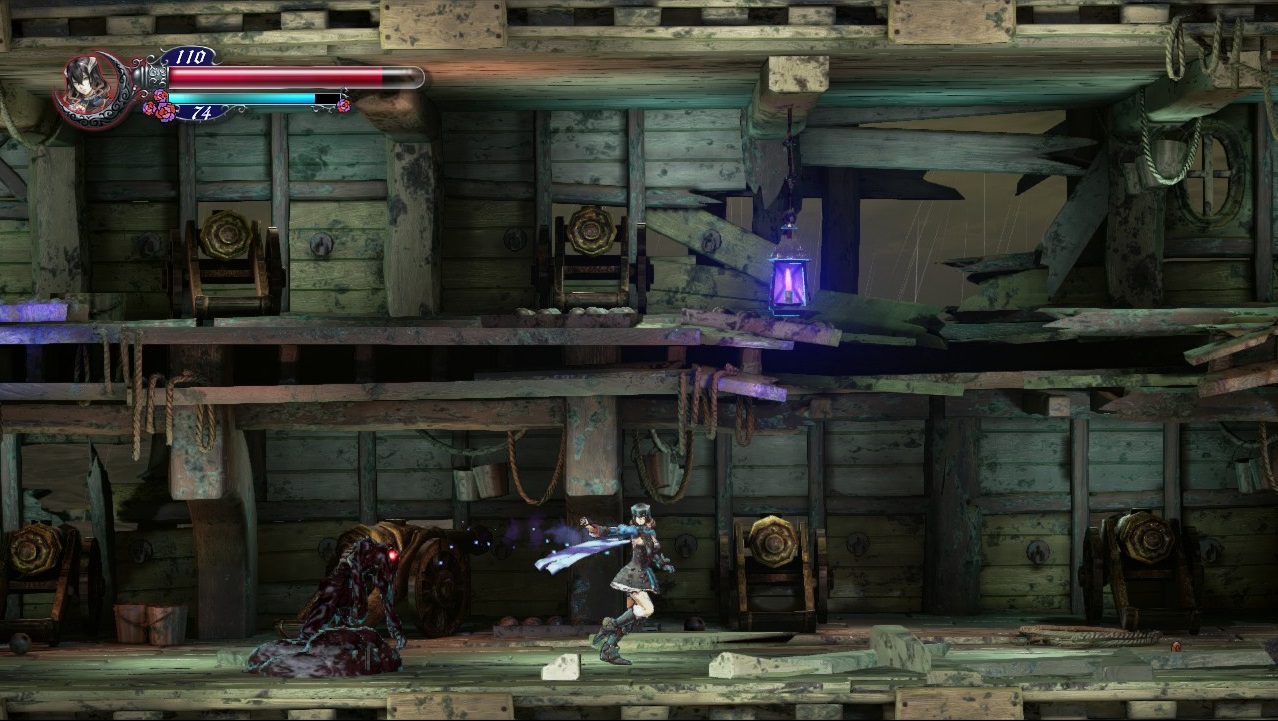 Bloodstained is nine months out from its intended launch date, so I'm sure there will be more to see. That being said, Igarashi told GamesRadar that he's not intending to innovate over his previous work. Most people who backed it will probably be okay with that. For me personally, I can't find a reason to be excited about this decision.

I think a lot of people forget that part of the reason Castlevania died was due to stagnation – maybe because of the excessive popularity of Symphony of the Night and the waning interest in the GBA and DS entries. Between 2001 and 2008, there were six titles in the 2D Metroidvania style. That's a near annual release cycle for seven years. That's not even counting other Castlevanias coming out in that time period. It's been a long time since the final Metroidvania entry in 2008. Nevertheless, its absence doesn't mean it shouldn't evolve.

The core team behind the project is Inti Creates, a developer with a strong history in the Mega Man franchise. It's hard to say exactly how much influence they have on the direction of Bloodstained, but the complete lack of ambition is disappointing given their track record. Their Azure Striker Gunvolt on 3DS is somewhat of a successor to Mega Man Z and/or arguably X. They found a new layer to add with Gunvolt that makes its playstyle entirely different from its previous Mega Man counterparts, despite using it as the foundation.

While an unpopular opinion, I feel similarly about their work on Mighty No, 9, which pulls from the original Mega Man entries. Obviously there's a ton of drama around this game and I don't really want to get into an argument about final product's quality. I will say, I fully respect the layers they added to change the typical flow of the series' foundation. You can feel the spirit of Mega Man inside Mighty No. 9 without it simply being a straight-forward Mega Man 11. 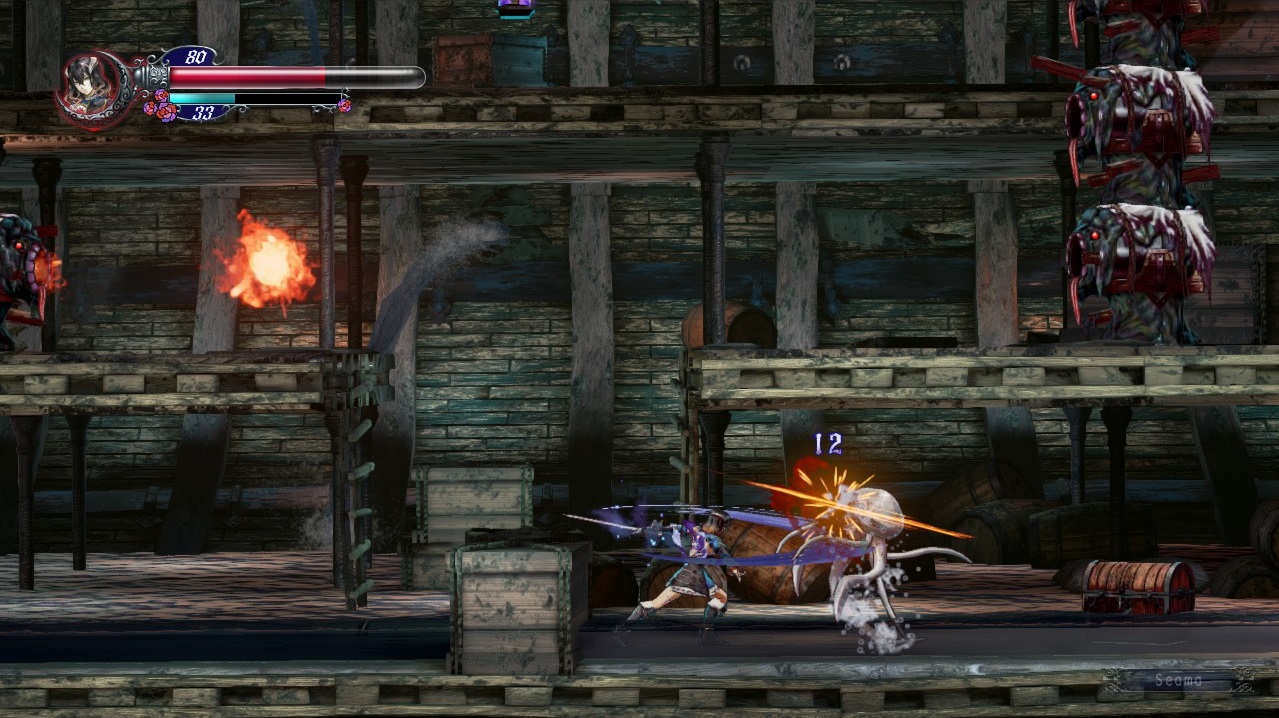 Bloodstained hasn't presented anything on top of what Castlevania has done since 2003. In the places where they have the opportunity to build anew, so far they've shown that they intend to nearly copy and paste every aspect of its roots. The return of directional attacks has potential, though the E3 build fails to highlight how it'll be more than just another attack slot.

I'm not saying Bloodstained will be bad. Over a decade later, Aria of Sorrow is still great. It just feels like Igarashi has given no thought to where the design will go despite the eight year gap.

Special thanks to Anthony Gerbais for access to the E3 build.