The bane of my Fallout 4 existence was those damn Brahmin.  Brahman are very large, hardy cows.. though of course regular cows are not mutated by radiation into the Fallout version with two heads.  Given that I've had two months of radiation, CT scans, MRI scans, a PET scan and still have to go to the dentist (which usually means dental xrays) ... I really hope that radiation doesn't lead to mutations - though I guess some extra arms might make me into a "super gamer" so I don't get my butt kicked in multiplayer games!  I became so annoyed at my damn mutated 2 headed brahmin that I started taking some screen caps because I was quite sure that these were annoying and unrealistic glitches and there was no way that real cows could do what my Fallout brahmin seemed to accomplish.
Thus began my covert investigation into the cowspiracy!
Cows can't go down stairs!
Everyone knows that! Even if they can somehow manage to go up the stairs, there's just no way they can get back down.  Quit blocking the stairs so I can get out of here you immoovable stupid cow!
Apparently I was wrong, and the Fallout 4 devs were right... cows can go up and down stairs.  It's certainly not pretty and the don't seem very good at it, but it's a little known cowcealed ability of these four legged critters that they can moooove up and down stairs.
Cows sleeping on beds? 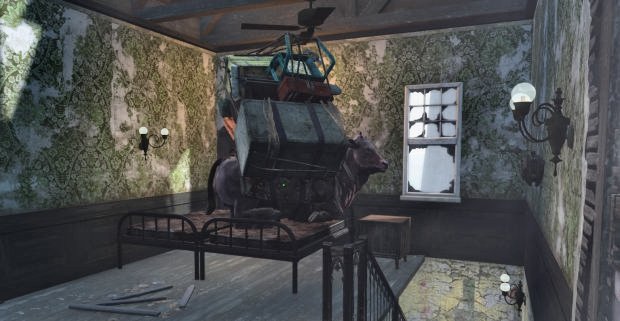 Very annoying... especially when I took the time to give my peasants...errr... settlers such lovely living quarters, only to find a damn cow sleeping in their bed!  I was quite sure this could never happen in real life!  Like a cow would actually walk upstairs and make himself all comfy cowzy on a bed?  No way.  Not possible. 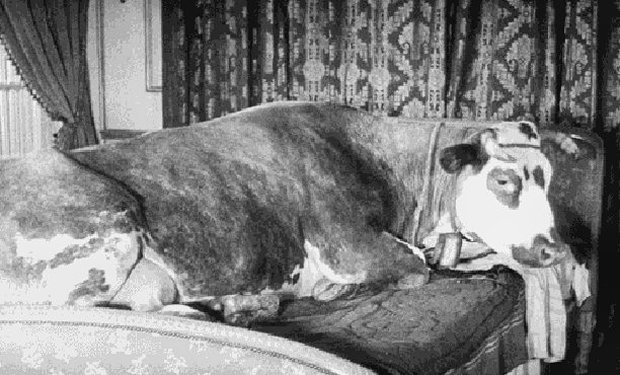 Yeah, totally possible.  Once again, apparently the Fallout 4 devs were right... and damn cows can sleep on beds.  They can moooch a nap quite comfortably on a bed.
Holy Jumping Cows Batman!  Cows can't jump!
What is my fallout cow doing on top of that fence??

The moostery of the jumping cow would take meticulous long hours of study, investigation, enquiry and analysis... or a google search.  As it turns out, cows aren't good at jumping, but when they have a running start and are properly motivated, they've been known to jump six feet high.  So yeah, apparently my cow was jumping over the fence. 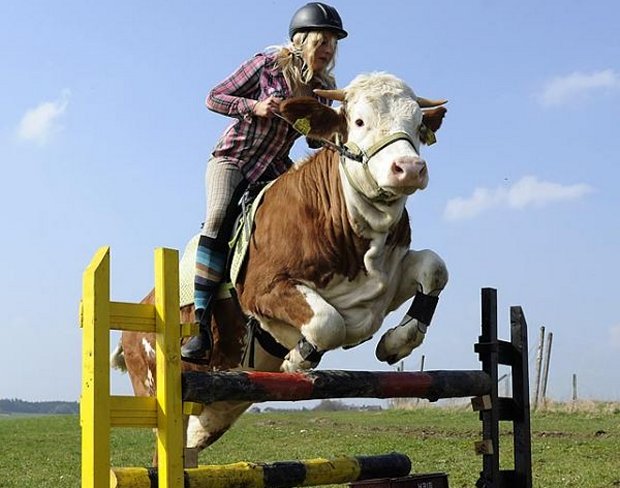 This is Luna, the show jumping cow, but there have also been reports of cows jumping over fences or on to roofs at least 6 feet off the ground!  Who knew?
Then again, maybe my Fallout Brahmin was going for this casual, hanging out on top of a fence thing: 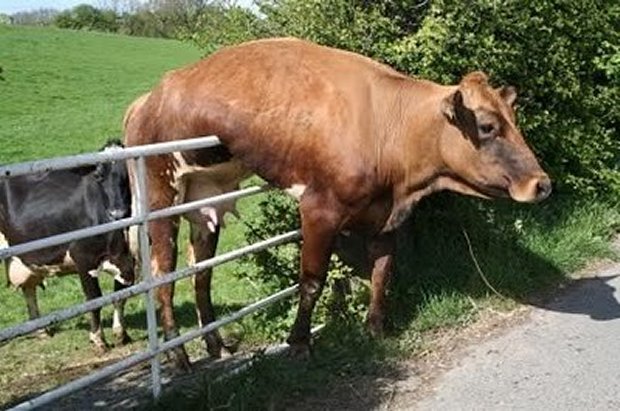 Cows on a Roof?
How in hell does a cow get up on a roof?  Why is she sleeping up there?  No way this could happen in real life.  The devs screwed up and somehow cows are walking on roofs and even sleeping on roofs.  This problem was so ubiquitous that there are even articles and threads on how to get your Fallout 4 Brahmin off of your roofs and counter arguments that the number of cows you had on your settlement roofs was a source of great pride!

As our investigation into the cowvert cudlture of cows has already now shown us, cows can climb stairs, jump up to six feet and sleep in odd places, so at this point, it's not really that difficult to beeflieve that cows can be up on roofs, and once again, this is apparently quite realistic.

Well, the steaks were high in this factual investigation as to whether the developers had misrepresented their imaginary two-headed Brahmin cows in their game and had created a cowspiracy of annoyingly unrealistic cows to troll their consumers with cows on roofs, cows blocking stairways, cows sleeping in beds... cows, cows, cows everywhere!  The cowspiracy has now been investigated and my work did exonerate the Fallout 4 developers. As it turns out, the "realistic mutated damn brahmin developer" (I'm quite sure that's his actual job title!) was right... and I was wrong.  Cows can apparently do everything their Fallout 4 distant bretheren can do.
.... it's been a real teat to find out more about these udderly amazing critters... and I now know more about cows and bad cow puns than any sane human should ever have to know, so of course I decided to share this all with my loverly insane Dtoiders.   :)
... though as an aside, it should be noted that my investigative powers did turn up one interesting tidbit - the spelling.  Technically a "Brahmin", the spelling used in Fallout, is a varna (caste) in Hinduism specialising as priests, teachers (acharya) and protectors of sacred learning across generations.  A "brahman" is a breed of cattle often used for meat, but is also a member of the highest Hindu caste, or in Hinduism is the ultimate reality underlying all phenomena.  This linguistic anomoly apparently led to the cattle being renamed in Fallout games in India! So... is there some sort of cowspiracy there after all?... or was it just an interesting linguistic lesson and that maybe they should have called them Brangus cattle (or hereford, or Holstein or Bonsmara... or... I'm a gonna give up now... there's a LOT of different cattle out there).  Cowspiracy or honest mistake?  You be the judge.
Login to vote this up!