I have had dreams of being a big, scary cyborg, but never about being a robot. And I have definitely never wanted to be a steam-driven android that's plundering spaceships near the cracked remains of planet Earth. However, this is what SteamWorld Heist is all about. I didn't play the first game in the series, as SteamWorld Dig sounded just like the indie title I would like to avoid. On the other hand, SteamWorld Heist sneaked up on me with a trailer that wooed me with turn-based tactical combat, trick shots and steam robots in a space western setting. Finally, you too can be Revolver Ocelot, only in the shape of an intrepid female steambot! 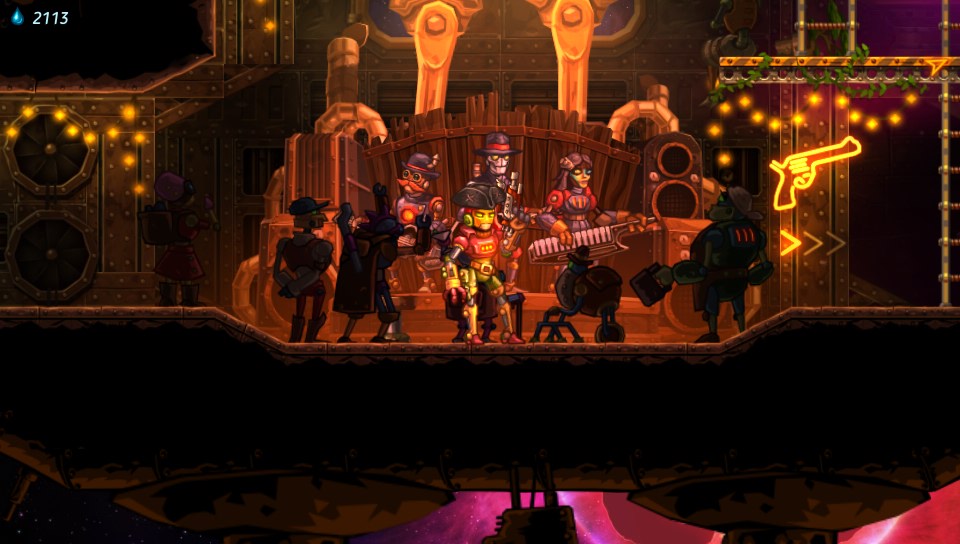 So yeah, the world blew up for some reason, and the only survivors are various humanoid robots making their living either on the floating rocks or in their steampunk spaceships. Steambots are the lowliest of the lot, ecking out subsitence on the frontier of the former Earth orbit. They have constant trouble with getting Gallons (steam engines need water, you know), harrasment by bandits and oppression by the Royal Army of the Dieselbot run Empire. Piper Faraday is a lady steambot captain of a pirate ship and she is about to embark on a great adventure of shooting robots, collecting hats and freeing steambots from various oppressors.

SteamWorld Heist was first released for the 3DS and reached the decent platforms only recently. I played it on my PS Vita, finally putting the damn device to some good use. And what good use it was! SteamWorld Heist is a 2D turn-based tactical sidescroller that everyone will compare to the new XCOM. That's because cover plays a huge role in the game, and units can perform up to two actions per turn. You will use those actions to explore randomly generated ships, take cover, collect loot (and hats), fight, use class abilities and so on. Each level ends with a daring escape via escape pods. So you have your Space Station 13 tie in, too!

The campaign is easy to explain: you move your ship between map nodes, which are revealed in a linear fashion as you make progress. Some nodes are shops (of guns and hats), most are combat missions. Your battles are rated in fame stars, with 3 being the easily achievable (on normal difficulty) maximum: sometimes, certain items or plot progression are fame-locked, but you have to be really bad for that to ever become a problem. Campaign map/ship mode is also where you sell loot and have a quick chat with some of your crew members between missions! 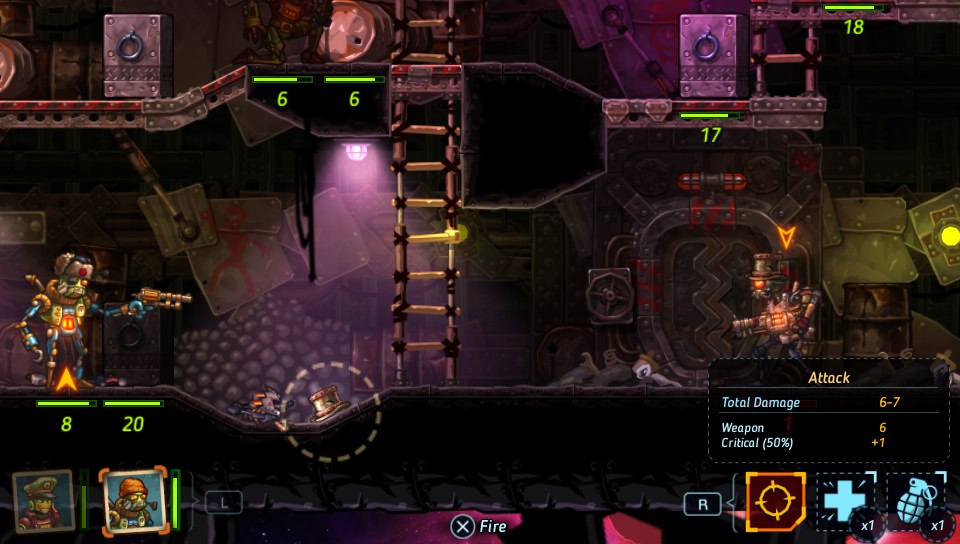 Crits and headshot barely matter in this game. Hats do!

However, equipment selection only comes up before a mission. You will be allowed to take up to four crewmembers (the most usual mission allowing only two or three) in any combination - Piper can actually sit it out, but she's too useful a character to let her go to waste. Ya see, each robot has a class, which comes with certain abilities and weapon usage. Piper can use sniper guns (their long range and laser sight are vital for trick shots) and pistols, Seabrass is a peg-legged former whaler that acts as your assault rifle or shotgun vielding stormtrooper, soldier bot Bea is an explosives expert, and so on. You will have duplicates of each class anyways, and the eventual robot combo really depends on your taste. Weapons also have certain qualities, bonuses and drawbacks: some sniper guns, for example, can't be used after moving, which makes them vendor trash, at least in my eyes. Your robots also have two utilities slots, but not being of the adventurous sort, I only ever took healing items and armor. The game had enough explosions even without me taking grenades and one-shot rocket launchers!

Each character can also be customized with a hat and some love went into this gameplay segment. How do you gain hats? Well, crewmembers bring (and share) their own ones, but you can also buy them or shoot them off the heads of the enemies. Simply killing the enemy wont do - you have to snipe the hat off and collect it! During the course of the game, you will collect a stunning array of headresses that are stylish, cool or at the very least laced with funny puns. Of course, like all good hats in video games, they have no real effect on gameplay... besides making you risk the mission for the sake of obtaining a boss hat!

So yes, Piper will be your go-to bot to gain hats, because her aim will let you hit enemies more than one PS Vita screen away! Most other combat will happen at much shorter ranges. There's verticality as well as horizontality to the game's levels which are split into rooms (enemies usually don't wander in from other, unexplored rooms. Usually), and most floors give free passage to projectiles. So while there is ample cover to guard your front and back, you must take care to not get shot from below or above! Combat is fast moving and generally fun, and you won't spend too much time thinking about your next move. Most weapons don't have targeting lasers, so you'll have to do a lot of approximate aiming, and that is a lot of fun. The enemies aren't all snipers either, so you'll see some spectacular misses. Of course, it all becomes all the more fun when friendly fire weaponry and explosive environmental hazzards are involved... 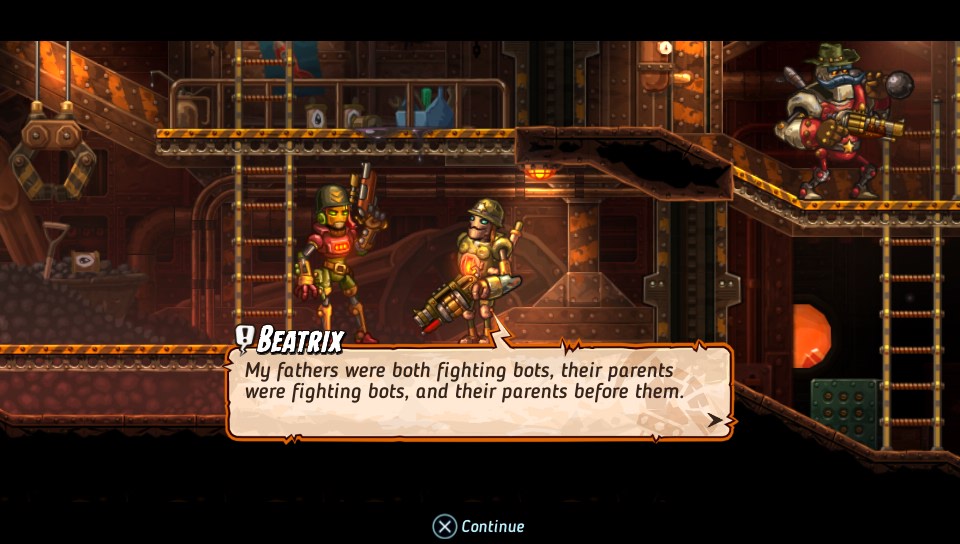 Beatrix is my favorite fembot. She always looks upbeat and carries a big gun!

The missions are designed to keep you on your robotic toes and feature enough variety to not get boring. Even a regular shootout will be spiced up with timed alarms that lead to turrets popping up and (functionally endless) enemy reinforcements. This will make you weight the importance of loot even in a firefight, and movement efficiency becomes a thing. After all, you don't get experience for grinding robots, and your score depends on everyone leaving alive AND collecting the epic loot crate. So it makes you think on your feet and act fast. There's no XCOM-ian overwatch that would turn battles into miniature recreations of WWI grind, and later kinds of enemies will have some interesting mobility abilities (as well as bigger guns). And you can always mix it up with different crew combos!

Now, as far as the visual side of things goes, SteamWorld Heist is a wonderfully drawn 2D game. The robots are full of character, and the crew is easily idenifiable even by the shape. The enemy robots are not lacking in love or detail either, and we all want to be shooting visually pleasing folks. The masterful hand of the artist extends everywhere, and even the level backgrounds look great. All in all, SteamWorld Heist is really pretty game, and it looks good on the PS Vita screen. The sounds are great, too. The robots aren't voiced, but it doesn't detract from the experience. The music is awesome, and it features some tunes by the Steam Powered Giraffe, which is a fitting band (and a fitting band name) for the setting. Can't say anything bad about the control scheme, either. It's easy to get the hang of, and you'll be directing pirate robots in no time.

SteamWorld Heist is a great game for PS Vita. The art direction is wonderful, the action is plentiful, the combat is always fun and it has hats aplenty. Plus, it features steam robot pirates flying in space with the bare core of Earth shining in the background. That's the kind of novel premise that a JRPG would provide... and then weight it down with pre-teen heroes and endless grind. Well, there's no grind in SteamWorld, and I'm sure all the robots are of the voting age. And they're voting with bullets!