Taking 70 Hours to Find the Fun in Xenoblade Chronicles X 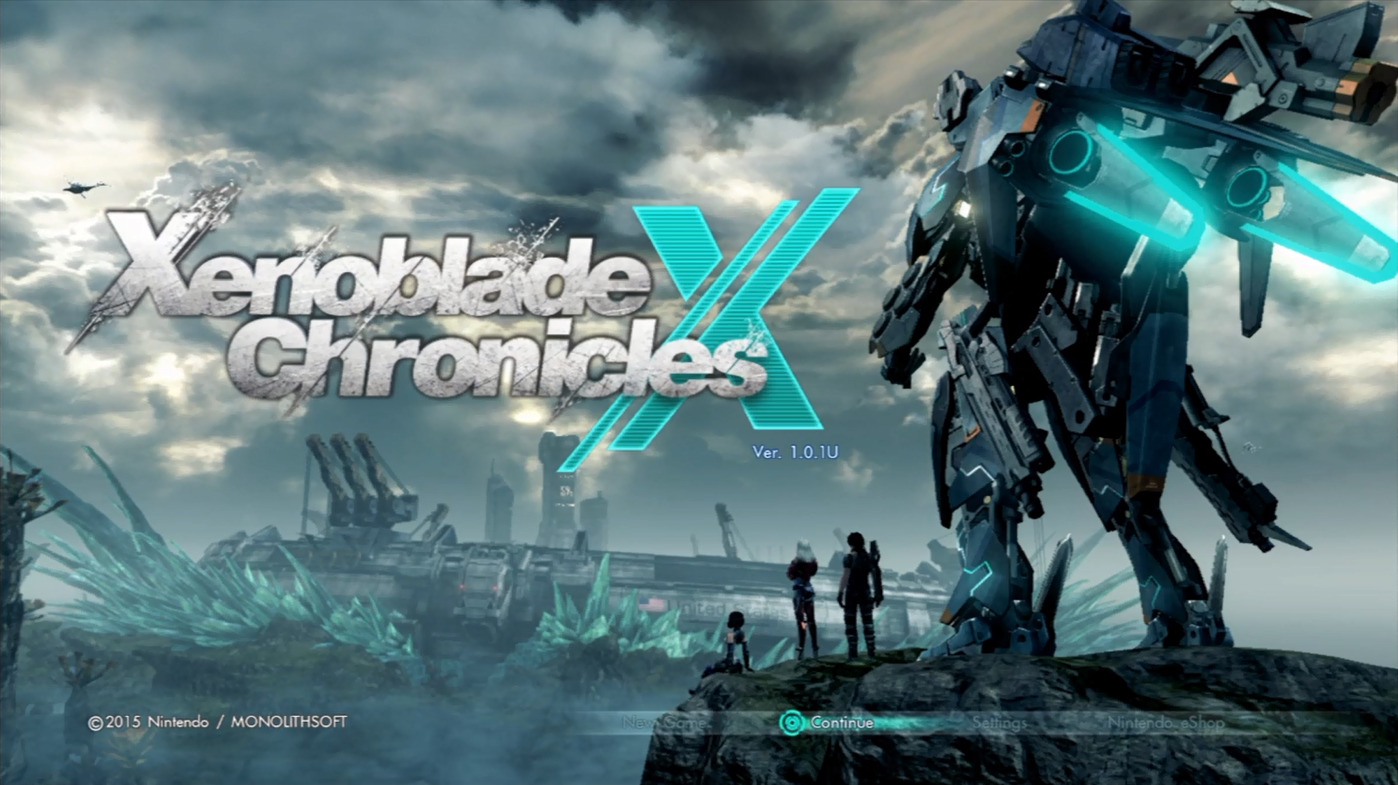 I've had a rough experience with Xenoblade Chronicles X and, after clocking in 100 hours, my time with it ended prematurely. I overwrote my save with a new file. Whoops. Even before my stupidity ruined my playthrough, I had a lot of trouble coming to terms with my feelings about the game. It wasn't until the last 30 hours that I really started to enjoy what the title had to offer.

Monolith Soft is traditionally a Japanese RPG developer and, technically, Xenoblade Chronicles X is just that. It is, indeed, an RPG developed by a Japanese team. Nonetheless, the game's design is significantly different from the typical linear funnel of Monolith's previous releases, as well as JRPGs in general. In the case of X, it's more of a playground of content versus a single path.

Because of the open design, there's little determining where you go and for what. For all intensive purposes, the entire landscape is available to you from the get go. There is a general order to the continents you visit, but there's no concrete structure for when, or what reason, you'll be visiting a new one. It's largely up to the player and what quests they accept. 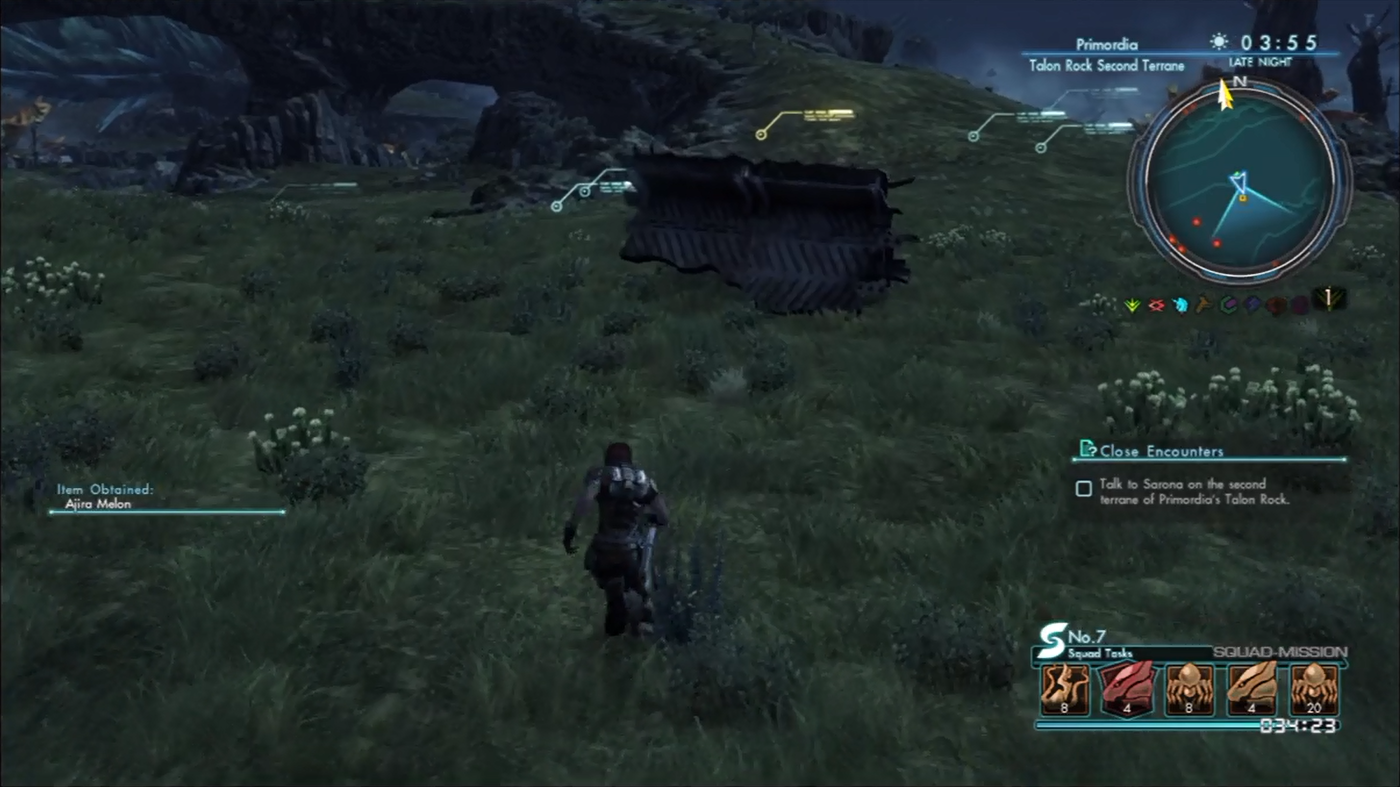 This fundamental design behind X is where I ultimately had trouble. It feels closer to what a Western RPG would be... or at least what I'd imagine it'd be. I focused on the Wii during the last generation, so I completely missed WRPGs' breakthrough into the mainstream. I had the intention to check them out, yet here I am today with the oldies like The Elder Scrolls: Oblivion and Fallout 3 still untouched. Aside from a brush with Grand Theft Auto, large-scale design is something I'm only familiar with through massively multiplayer online RPGs.

The original Xenoblade has large and open environments, though the focus is on pockets of stuff to do linked together through a linear tale. There's an option to return to most of the previous areas, but the core design has you going from one environment to the next. In the case of X, traversing to a new continent simply adds to the list of places you can do stuff in.

Even after spending 20 hours in the first area, you'll continue to do major tasks there throughout the game. Essentially, the content was made to fill the environments, versus the environments being made to drive the content. The lack of change in scenery set in a feeling of stagnation. By the time I hit around 35 hours, there was a moment where I questioned what I had really accomplished. Clearly I was doing something, however I had a hard time putting a finger on exactly what. 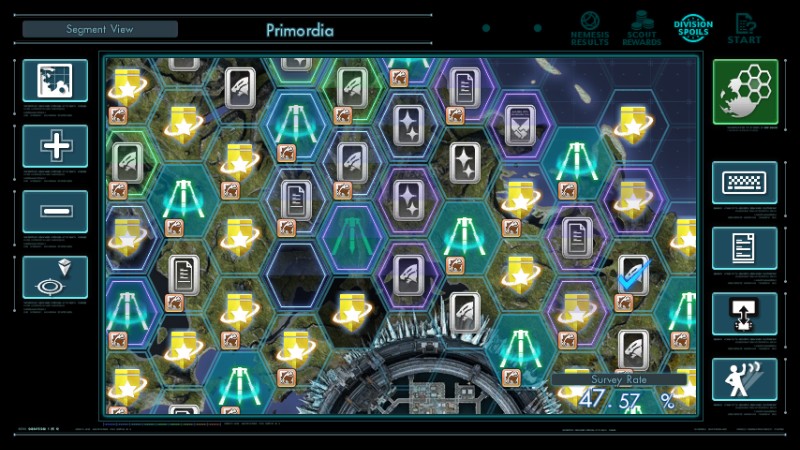 I also had this constant stress of feeling overwhelmed. X isn't ashamed to show you how much there is to do. The map is divided into hexagons that present the major objective for each section of the environment. Instead of filtering based on what you can access, it shows you everything at once. Over the years, I heard stories of players' experiences with The Elder Scrolls: Skyrim, where they almost completely ignored the main arc and spent hours upon hours getting lost in the world. For me, the constant pull in different directions was information overload.

There's this sense of urgency and necessity to everything: collect this item, complete that quest, talk to this person or whatever else. At the end of the day, I never felt like I was getting anywhere. Sure the core story was slowly unraveling, but X's central plot is hardly the main draw of the experience. You can plow through it, though doing so ultimately feels like pushing against the design of the game. These missions have large difficulty gaps between them. Dying enough will ease up the difficulty, nevertheless it's clear the player is intended to be doing something else during interludes.

In general, side quests are rarely a priority for me. If I complete one, cool. Still, I'm not going go out of my way to finish it if it keeps me from the end. However, X essentially forces players to interact with all levels of its content. In addition to the main path, there are character-specific side stories that feel essential to the experience. A large portion of the party members' character development comes from these. Then, there's more city-related side missions that often contain small story arcs to teach the player more about the planet, life in the main city, alien races and other small bits for world building. 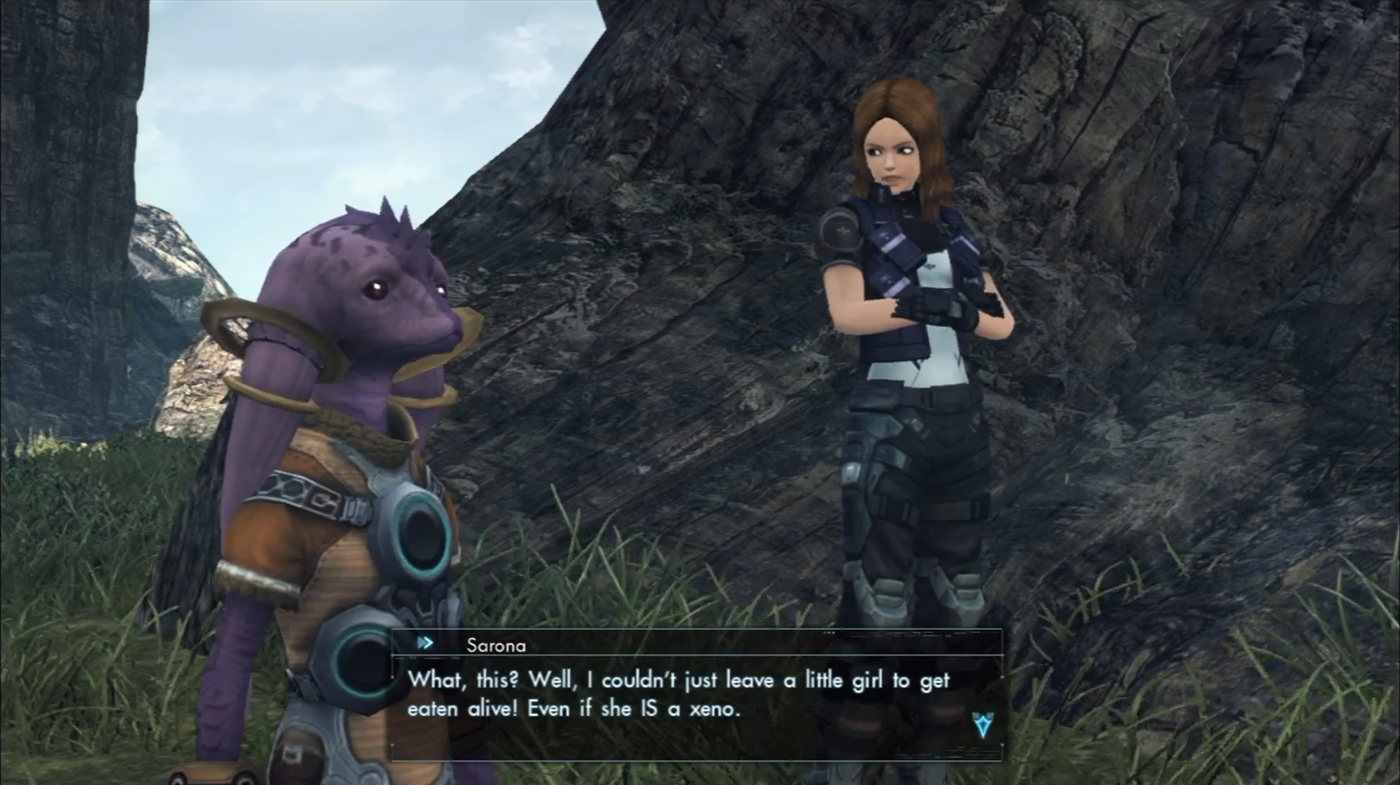 At an even lower tier are job board assignments, which are completed purely for the rewards. At the bottom of the chain, there are dialog trees you can have with certain NPCs and group members around the city. Even outside of these, there's excavating key points on the map, laying probes to analyze the region, discovering scenic points, managing the probe network to increase income, a collectopedia to fill out with items, gear augments to craft... I'm probably missing a handful of other random things to also interact with.

Trying to understand exactly how these tasks fit between the main missions was tough. I was at a loss for what to focus on and couldn't find a good way to juggle content. This isn't necessarily just me trying to understand how to have fun with the game either. X gives a lot of push back that keeps the player from doing the things they want. There are a lot of situations where it presents objectives that may not necessarily be doable at that point in time. 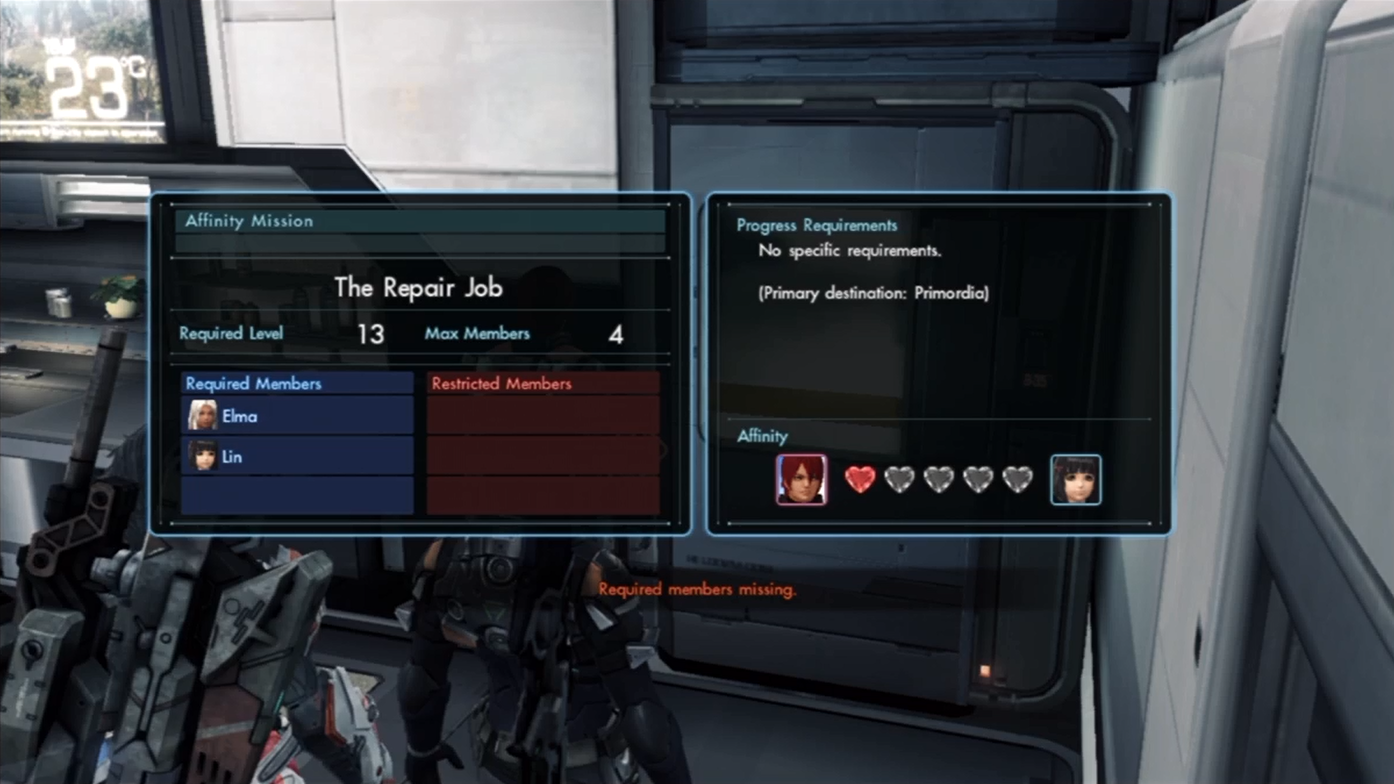 The main secondary missions have level, relationship and quest completion requirements. The troublesome ones are the relationships, which require the player to spend hours building character affinity so you can do one story line. It's made even worse by making the player actively level each character. So over half the time, the party was a burden because they sat anywhere between 10 to 30 levels lower than my character. It reduces the focus on building a team based on classes, as it requires the player to drag around members who simply need some buddy love.

There are some barriers that aren't necessarily official restrictions. It's not uncommon mid-objective to find out the enemy placement keeps the player from completing an assignment. High level foes are haphazardly placed throughout the environment. Level 20 quest-specific enemies might be sitting snug with a random level 50 monster. Even if they're not aggressive, many combat skills have an area of effect and AI party members won't be shy about shooting in the direction of the beast. Changing the time of day in-game can help, yet also introduces new foes that cause other headaches. I ended up with a lot of mid-progress missions that I simply had to leave behind for one reason or another.

The loose ends start to build up and X doesn't handle bulk information well. The player can only track one quest at a time. Others that are accepted will appear on the mini-map, though the size of the world is so massive that it's rare to cross paths with one not being tracked. Although there's already a huge number of menus and an excessively cluttered user interface, often it can be unclear on where to find things. Certain tasks will have markers, where others will have none at all. 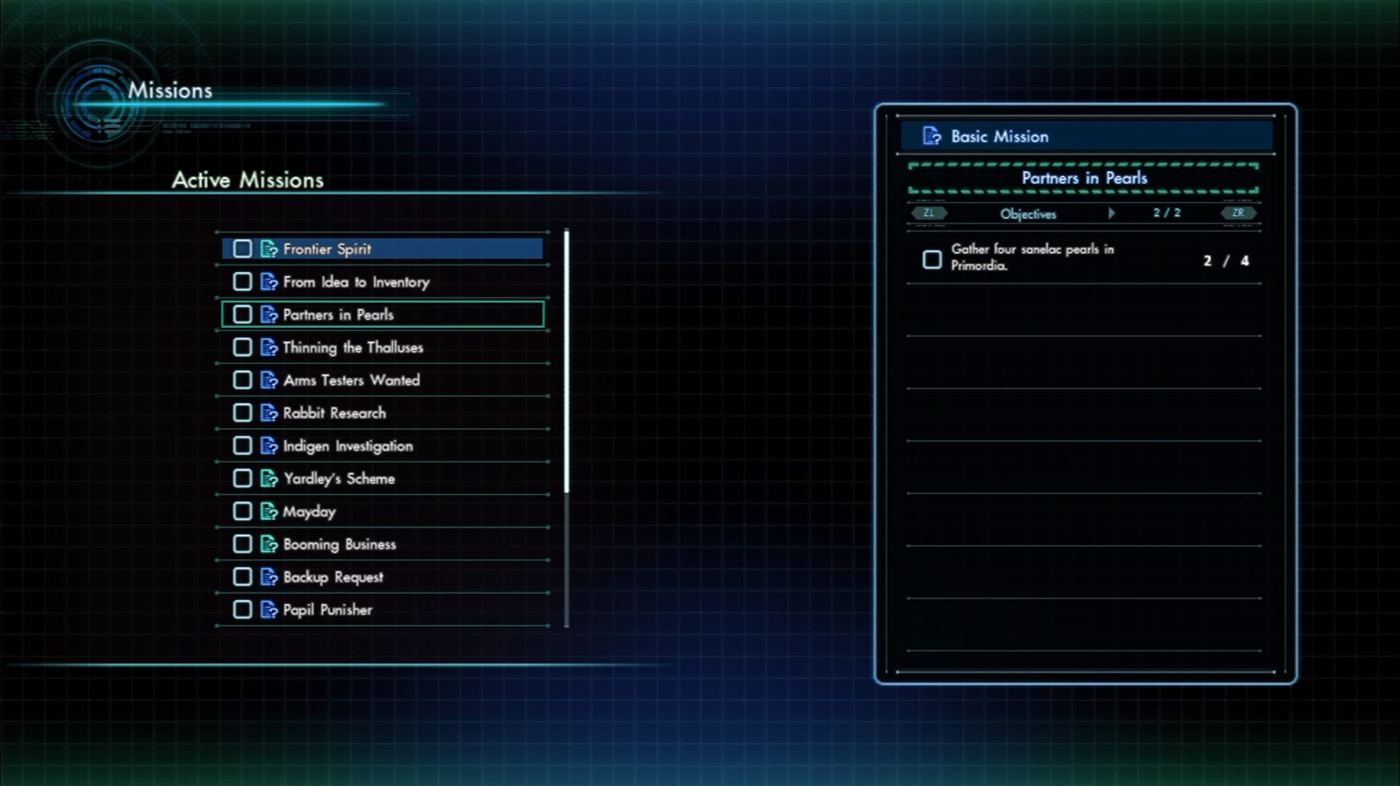 There's something to be said about not painting an arrow to every point of interest. However, listing “this monster appears on this continent,” with no additional indication, does nobody any good. Since there are five continents, they're essentially asking the player to search a fifth of the entire landmass available. Attempting to comb an entire continent for one thing takes a lot of time, especially when limited to traveling on foot. Unlocking the ability to pilot a mech, called a Skell, helps tremendously but hardly solves the problem.

Exactly when you get your Skell depends on your own pacing. For me, it was 40 hours. Exploring on-foot does communicate how large the landscape is and there's value to having the player get a sense of its full scale. That being said, I wouldn't exactly call it a fun way to travel – especially with all the zigzagging needed to collect items scattered in the environment. 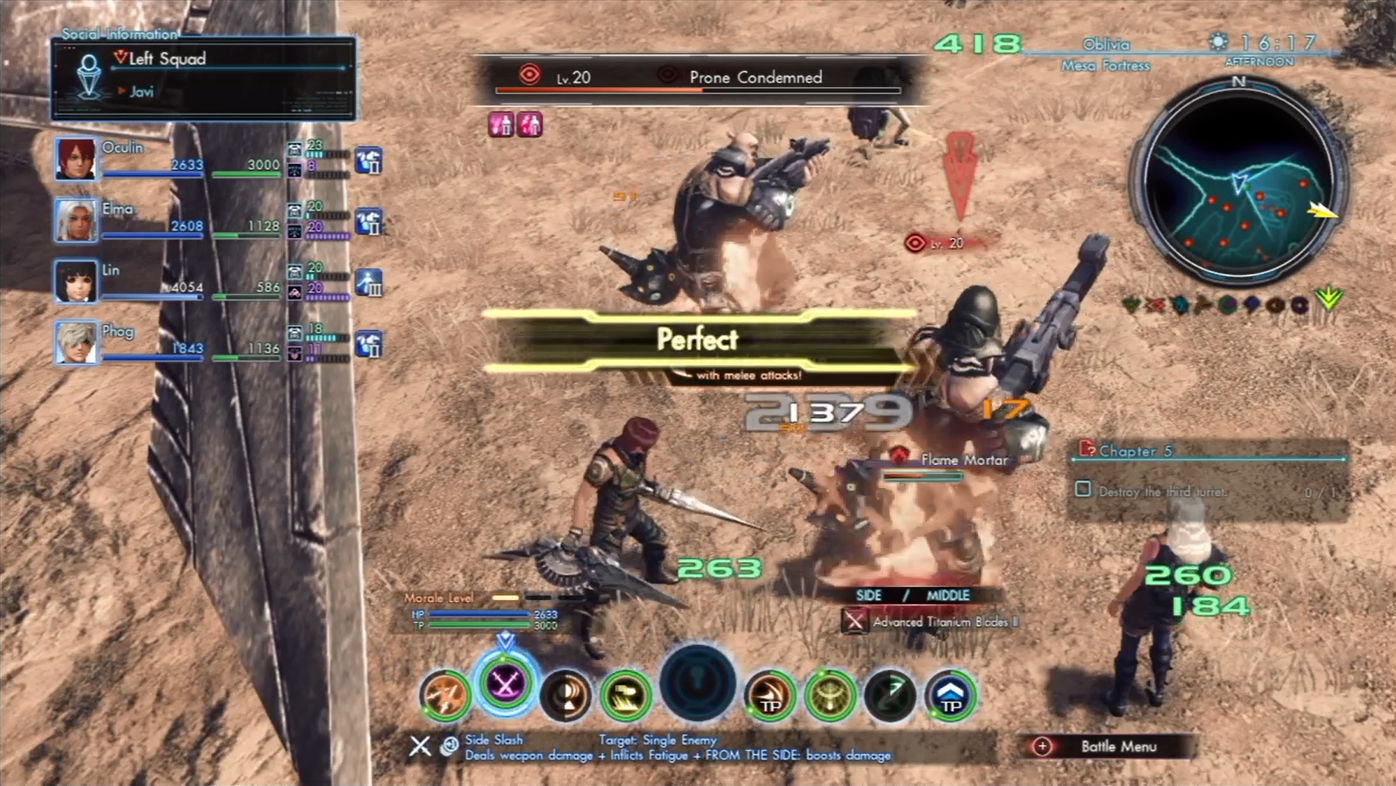 Despite all these problems, I kept coming back to Xenoblade Chronicles X. Because I'm a Monolith Soft fanboy? Maybe. The combat, largely pulled from the original, is still quite fun and the addition of chaining skills via battle dialog is a nice twist on the formula. The world itself gets built out extensively with a lot of small quests showing the relationships between minor characters.

Each race has their own culture you learn about through these story lines. While minor stories on their own, as a whole they flesh out X more than the main plot. Like other titles focused around a central town, there's also a nice homey feel at times. Characters get a chance to kick back and relax, even if just for a little bit.

I appreciated X for being its own game versus a straight sequel to the original, yet I don't think I could say I had fun for most of my experience. Ultimately, the sheer amount of content and the number barriers was a source of frustration. And the lack of direction and environmental diversity made it feel like I hadn't gotten anywhere, despite dumping almost two RPGs worth of time into it. 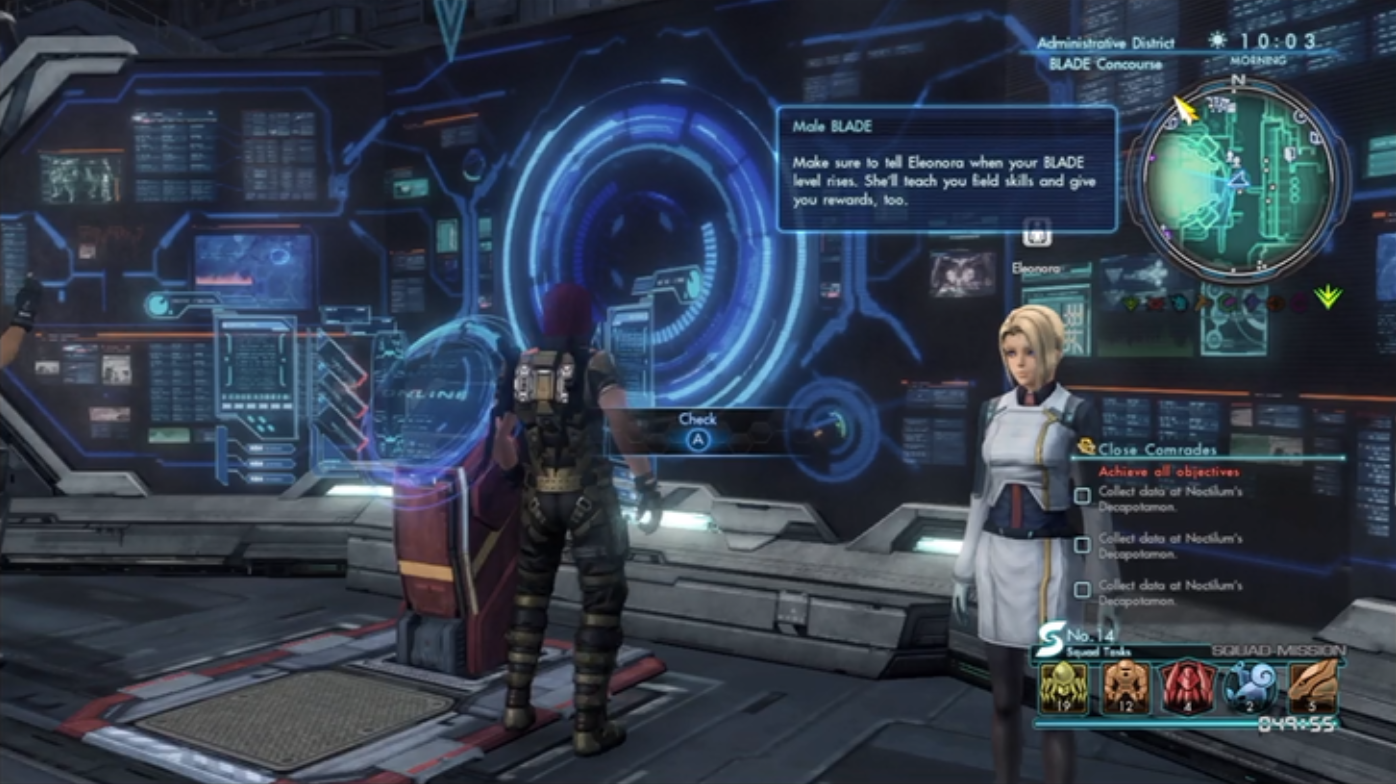 Eventually, I fell into a flow. I would spend ten hours doing a variety of side objectives while spacing out more in-depth character-specific missions between all the little bits and pieces that came in-between. I also almost exclusively kept new members in my party to grind relationships, which created some unnecessarily challenging moments. In exchange, I was getting a steady stream of story heavy character quests.

Because of that flow, the last 30 hours clicked with me. I was having a great time jumping between all of these different levels of content, which kept the grind fresh.

Not that me finding a way to enjoy Xenoblade Chronicels X to its fullest excuses the game's issues. Familiar with WRPGs or not, there are some headache inducing design decisions even I can see. Understanding how I personally wanted to take on X was key in finding the fun in it. I can't say non-linear open worlds are my new favorite game structure. But at the very least, I feel like I'm in a position where I can fully enjoy myself next time I approach one.

Special thanks to Alonzo (@AzureZero13) for the gamepad map screenshot.