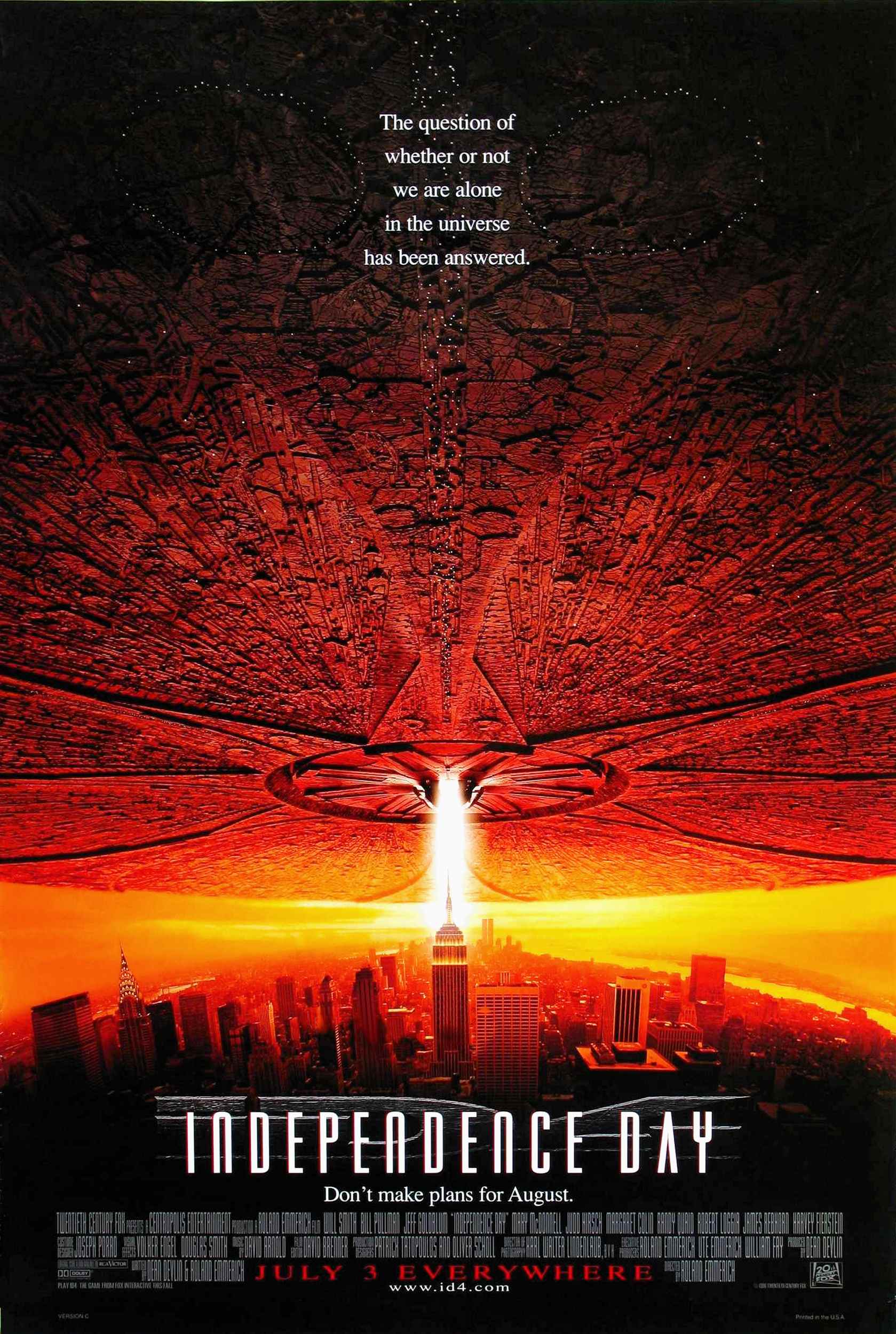 Ahhh, ID4, you magnificient sonuvabitch. How could a blockbuster movie with such cliched script and performances like you get to be deemed an American cinematic classic? Hollywood-grade performances, 'Murica-patriotism spilt all over the scenes, and uninspired alien designs. You were destined to failed in the eyes of the critics and worldwide audiences, and yet, some critics knew what they were getting into and roll with it, and some of us knew better than to eat up all the dumb patriotism and the dumber "How dare Jews saved the world" controversy (I did not make this up.), grab some snacks, and enjoy the show.

Independence Day was one of the well-known sci-fi flicks to remained on a lot of movie buffs' mind. Even after 20 years since its release, its special effects still look fantastic, the action looks good as ever, and the '90s cheesiness are still intact. And since its sequel, Independence Day: Resurgence will arrived in cinemas in mere days, it seems like a good time to rewatch how this movie managed to hold up to this day. 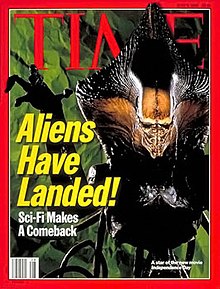 Japan called, they want their alien designs back.

Surprisingly for its period, the movie wasted no time kickstarting the plot right away. After a few short scenes about mankind arrived at the Moon with its plague, patriotic flag and all, it soon being overshadowed by the shadow of the alien mothership, wiping off the footprints on the moon ground with vibrations, presumably so it could do it and say "Fuck you, humans. This is our time to shine!". Meanwhile, the SETI institute and the US military found out about the spaceship and inform the young and handsome President Obam- I mean President Whitmore, one of the main protagonists, about the situation. By god, Mr. President Whitmore. You were played by gorgeous actor Bill Pullman back then, so how the fuck did you became so old in the sequel?! You looked like you were at your 30s back then (I know you were actually in your 40s, but shut up), and you accelerated into a grandpa this year. Jesus. 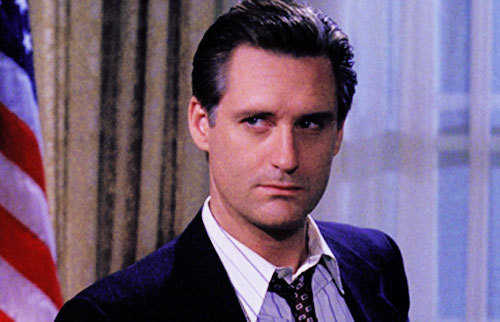 And then we cut to ex-mugger Jeff Goldblum playing chess with his father from Taxi (Never watched the show). Jeffy proved to be embarrasingly uninteresting here compared to his wise-cracking dad. He then found out the aliens was misusing the satellite signals of his workplace for something nefarious, and Mr. President have even worse news: The mothership (Called Bigship from now on) sent out smaller spaceships (Mediumship) to various part of the world, and decided to have lengthy Thanksgiving dinners after being in positions. Oh by the way, a drunken former pilot who was abducted by aliens is also in it, in case I forgot.

The Unfazed Bel-Air Family, consist of expert military pilot Will Smith, Fox the Girlfriend and her son, took the aliens' sudden arrival surprisingly well compared to others. Interestingly, both of them have their conventional movie roles reversed. Both Smith and Fox, who are the luckiest African-Americans in this movie, have their own Caucasian sidekicks who have small, unimportant roles, aren't as lucky and being written off the script quite early. Jeffy and Taxi Dad then drives to the White House to meet his ex-friend The President, and ex-wife who's the White House staff, and warn them that the aliens might be attacking them. They agreed and rushes into Air Force One after their first contact ended on a sour note. 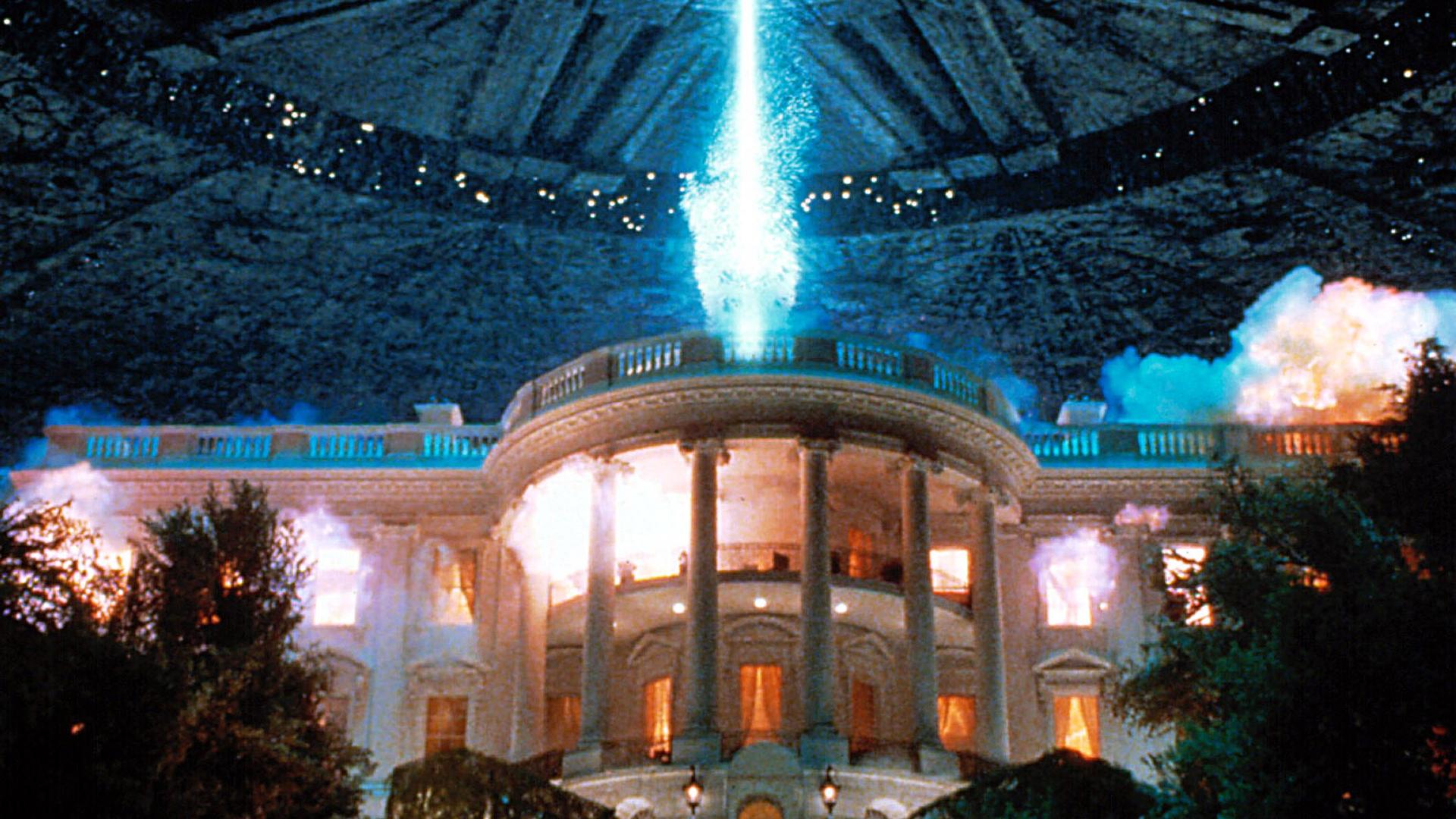 This is the money shot, boys. This is what we paid to see in cinemas.

AND THEN!!! Time's up. Mediumships' blew up the buildings in jealousy, resulting in millions killed in the radius blast, with the best special effects money can buy. This is the scene millions pay money to see, and it delivers in spades. Even after two decades, the fireballs consuming the building still looks good, and the miniatures' explosive reaction to the flames are still spectacular. Also, the Air Force One outrunned the flames, and Fox and son and dog hit the shelter and survived.

The next day, we saw a few scenes of the US in total destruction, and then Will Smith & Friends ride on fighters to attack the Middleship in retributon. It didn't work, as they discovered that both the Middleship and alien fighters (Miniships) have protective shields on them. Soon the battle rear its ugly head towards the humans, and Will Smith then tricks a Miniship into crashing into the ground. Being mad and a bit cocky, Smith opens the Miniship cockpit and give the alien its well-deserved punch into the face, while welcoming its first landing on Earth. And then rabble about it ruining his day off while carrying it. 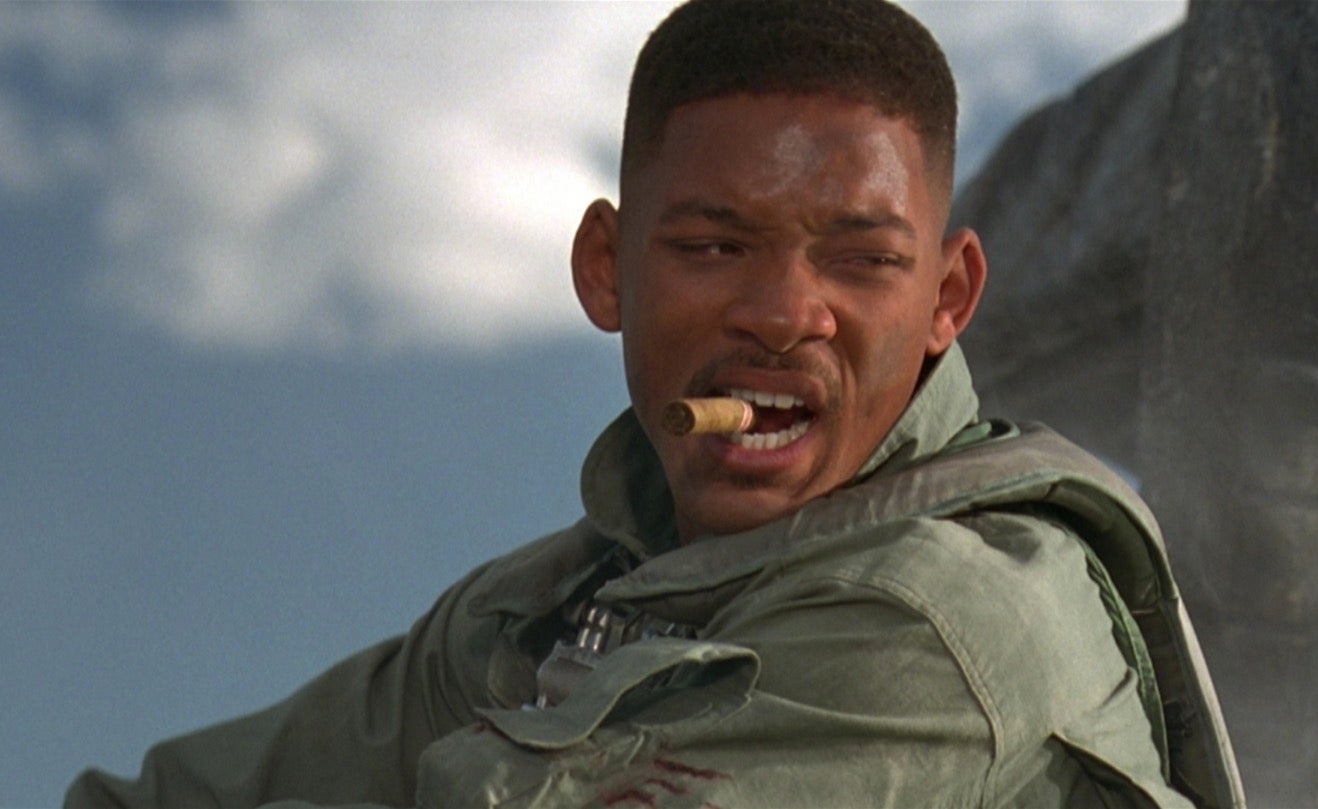 After learning of the existence of Area 51, the Air Force One then flew there to plan their next move. Adam Baldwin and Dr. Data welcomed them and show them the alien remains and the Miniship found in Roswell, New Mexico, to know what they're dealing with. Also, some inner conflict between the US staffs.

Smith then arrives at Area 51 with the convoys and deliver the unconscious alien to Dr. Data. Forgotten to induce the alien into a coma, wear some anti-telepathy helmet, or even gave it a quick death, Dr. Data gleefully proceed to perform surgery on it. I'd say that even X-COM knew better on how to deal with live aliens, but you know what, that would be extermely disrespectful to Hollywood scientist eveywhere. I'm sure Dr. Data knows what he's doing, and thing will go smooooooth for him.

The very cute alien then gave Mr. President quite a nasty headache, and then get pumped full of lead for its trouble. Mr. President, learning from his headache, learned that those aliens are just sooo damn lazy, that they just refused to learn how to create its own food & resources, and decided to pillage planets for fun and profit instead. He gives the order to nuke the nearby Mediumship, and it still didn't work, plunging the whole world into depression.

Smith, worried about his future family, gets to the choppa and find them in the ruins of L.A. And he did, along with the mortally-injured First Lady (You're telling me I didn't mention her earlier?). Mr. President and his daughter (Seriously? I didn't?) greeted his wife one last time before her ascension. This is a super serious and sad moment, people.

Jeff Goldblum, failing his conversation with his ex-wife and learning that nuking didn't work, got somewhat drunk and kick stuffs, because reasons. The heartwarming moment between Jeffy and Taxi Dad gave him an eureka moment. In fact, the only way to disable the alien shields and gave mankind one more chace to strike back, is VIRUSSSSSS!!! Jeffy also managed to get the '60s Miniship to work, giving the President and staffs the self-confidence they desperately needed. The Secretary of Defence, refusing to believe that miracles exist, got fired for his beliefs. Due to shortage of military pilots, the staff ask for anyone among the convoys who could fly to help them, and the aforementioned drunk ex-pilot is just the man they really need.

After one cheesy-yet-awesome speech from the President, Mr. President decided to join the boys as moral support to increase the pilots' self-confidence during their last assault. The staffs also uses Morse Code to deliver instructions to military pilots all over the world to begin their respective assaults (The British/Middle-Eastern ones are particularly anxious to kick ass and take names). Also, Will Smith and Fox got married, with Jeffy and ex-wife as witnesses while rekindle their relationships.

Smith and Goldblum, chosen for the mission, ride the Miniship and fly towards the Mothership. After they went inside Mother and uploaded the virus (Apparently aliens haven't discovered the existence of computer virus yet), the military approved the final assault on the Middleship, and successfully damanged the ship. Then dogfight ensues. After wasting all their missiles on those darn Miniships, the drunken pilot managed to save one for the occassion, but oh no, the last missile is jammed! A glance at his family photo, the drunken pilot greeted farewell to his children, shouted even more lines, and fly the plane kamikaze-style into the Middleship's blue cannon, ultimately destroying it. This scene was so well known, it was also replicated during the final cutscene of Metal Slug!

Apparently, there's no still shot of that scene, so a poster was needed for reference.

The Earth was finally saved from those dasdardly aliens! So will the movie finally ends? Nope! Smith & Goldblum are stucked and surrounded by them aliens. In despair for a minute, non-smoker Jeffy and Smith decided to chomp on their cigars (No innuendo here) for once before greeting the aliens, launch a timed nuke at them, and fly out before the ship blew into chunky gibs. Finally, the duo were save as sound and the world are at peace once again. Until 20 years later, that is.

All in all, Independence Day was a really fun popcorn movie. Sure, it had a lot of problems, but some of them inadvertably help the film, and turn it into a total '90s nostalgic cheesefest. The casting of Will Smith also did bring the film up from mediocrity and bring in some variety into it, and it's quite a shame that he wasn't in the sequel for various reasons (Asking for higher paychecks, career dilemma, etc).

So now that I've watched the movie yet again, it might be difficult for me to find the time to watch the sequel due to work.

"O hai, Johnny! Fancy seeing you in an alien spacecraft!"