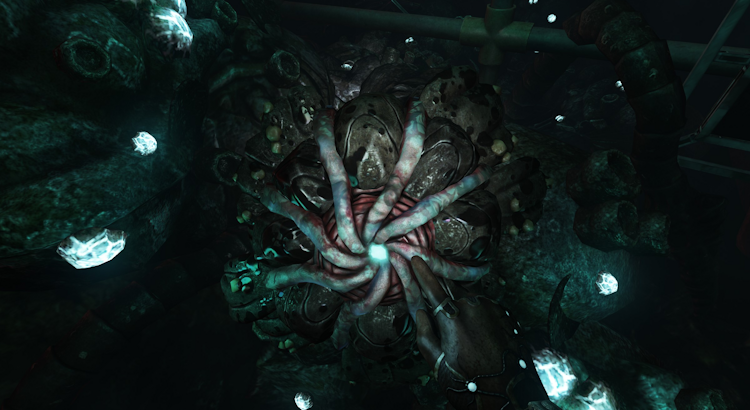 I pre-ordered SOMA for PS4 but decided, as I sometimes do, to let it marinate in my backlog a bit. Aging it like a fine wine. Occasionally, if I'm really enjoying myself, I don't like to finish games. Silent Hill, Persona 3, Shin Megami Tense: Digital Devil Saga, the third Shadow Hearts game... even Resident Evil, up until the remake. It's one of those "I don't want the experience to end" things which is a bit embarrassing and sentimental coming from a guy who isn't sentimental about much of anything.

At any rate, being poor, I never had a PC that I could use for anything more than web browsing and updating iTunes for the last seven years. Playing earlier Frictional Games titles, like Amnesia: The Dark Descent, just wasn't an option. All of their games are exactly up my alley but this is the first console outing so I was incredibly psyched to play it. However, I also have a weird thing where I like to avoid hyped games at launch. It tends to color expectations. I bought Fallout 4 and still barely touched it. (In due time.) With SOMA, I didn't want a repeat of Outlast, so I avoided Let's Plays and (tried to avoid) spoilers. (In due time for you as well, Outlast. I want to beat you before the sequel comes out.) I knew SOMA was short enough that getting too attached wouldn't be an issue but I still wanted to hold off a bit. I'm glad I did.

I wasn't initially sure if the switch from outer space to underwater would be beneficial but, from a story perspective, it makes much more sense. I kind of wanted more of the cat-and-mouse with the creatures as those sequences felt too short. I think Alien: Isolation spoiled me in that regard. All in all, though, it was an excellent experience. Not having played their earlier games, I was still able to see the maturity in their storytelling and the questions of identity that run throughout the game were very well realized. Maybe this is the jaded horror junkie in me, but I didn't find it nearly as scary as I did tense. The dying underwater labs were gorgeous in their own unsettling, often gory ways. Definite high marks for the entire Frictional crew.

Now I'm on to the Valkaria Chronicles remaster, which I missed being a late PS3 adopter. I think waiting was a good idea because the storybook anime style is gorgeous and the soldiers have enough personality and design quirks to feel individual and unique. All good things since it makes me more invested in not letting them die horrible deaths. I'm still early on and expecting the difficulty to ramp up soon so we'll see if any of those X-COM skills still remain.

At any rate, I won't be hosting anything this Friday due to a board gaming night (Zombicide: Black Plague) but feel free to hit me up on the weekend for some CODBLOPS3 or Garden Warfare 2.

In the meantime, I leave you with my newest jam. Bless you DJ Shadow and Run The Jewels. You're both killing it.

If you want to schedule an event (FNF, Weekend Warriors, Twitchtoid), just leave a comment like so:

To join in, simply send a friend request to the match host! (Don't forget to say you're from Dtoid!)

If you don't feel like waiting around, you can schedule a Twitchtoid session, check Steam or Nintendoid, or find fellow Dtoiders for a game whenever you like. Feel free to make use of the snazzy new Quick Posts to put out a call immediately!