The Vita? It has a whoooole lotta games comin'

Let's talk about the Vita for a sec. I mean like, literally, a sec. I'm gon' be quick on dis one.

There still seems to be this weird opinion floating around that the thing is without content. That because some of the games on it, of the hundreds it has, exclusive and otherwise, are getting ported, that that was just it for the console. Meanwhile? Look at that, y'all! It's actually got quite a few games on the way. Not just in Japanese, either, I mean 100% English. Just take a look-see at what us Vita (and Vita TV) owners have to pick from in the future... 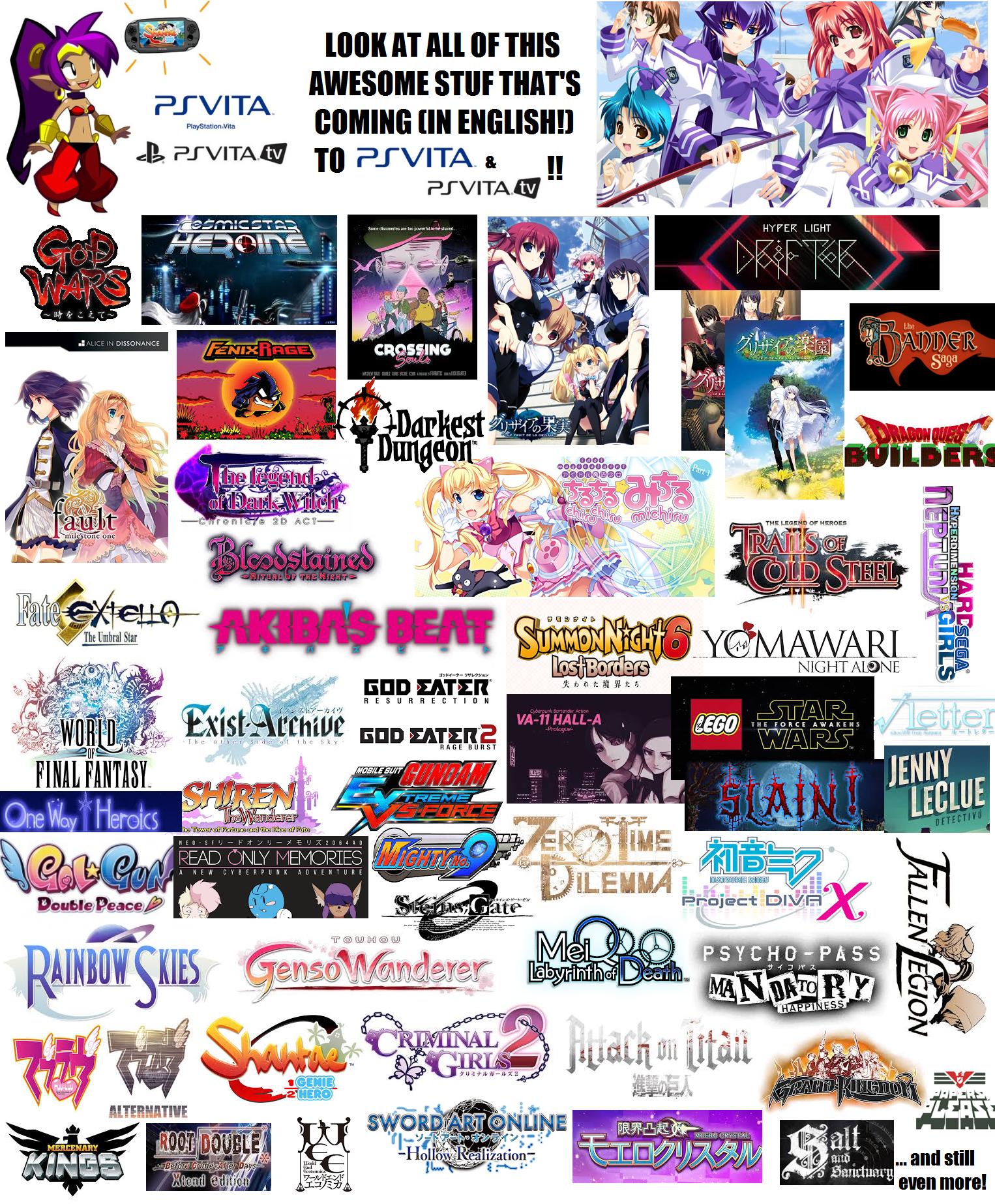 Now before we start, let's get something cleared up. I'm not here to sell anyone on a Vita. I'm not here to talk about whether or not these are games that are mainstream or sell consoles or whatever. That ship has sailed. It has loooooong since sailed. You either want one or you don't right now. It was probably long gone even already two years ago, when, for example, Sony announced Tales from the Borderlands for Vita at their E3 2014 show, yet when asked about it, a TellTale representative responded by saying they hadn't announced the game for the Vita. And look, it's still not out yet.

So yeah. I'm not here to talk about where it went right or wrong, if any of these games will help, or any of that. I'm here to talk, plain and simple, about what it has. And that is, without any question, content. To be more specific, it has content coming. A fair amount too.

If you do not like the content it has, that's swell. People don't like a lot of things. That's cool. If you, for some reason, think some of it doesn't count because of what country it comes from, the art style it has, the fact that it's indie, the fact that it's multiplatform, whatever, well, that's weird, but suit yourself. But no matter what you do, it won't make these games not be on the Vita. Think about it. I don't like the content on Xbox, or most of what I does is available elsewhere. Does that mean the Xbox, or at least its content, doesn't exist? No, because that's stupid. It's always been stupid. Why do people keep saying these things?

Just look at that picture. This console has over fifty freaking games lined up for the next couple of years, and you can take these games wherever you want. And these are all English releases. I didn't include a single one that hasn't been confirmed for some form of English translation, assuming they're not natively English titles. There are plenty of games that are likely or guaranteed localizations I didn't add but could have.

How many people complaining about it (who aren't buying PC games on the cheap) buy that many games for consoles new to begin with? You're basically set for every single month for the next few years provided your tastes match up. And yeah, if they don't, that sucks, but that happens. That's also why not everyone has a Wii U or both a PS4 and an Xbox One, or even why some people, shockingly, may only own a Vita but not a 3DS. I'm saying this again. I'm not trying to sell you on any of these games. I'm probably not getting a fair few of them myself any time soon, if ever. I've no idea.

But just look at some of the games coming up. Some of the highest rated visuals novels and indies of all time are coming to it. MuvLuv, Steins;Gate 0, Grisaia, Root Double, and more. Highly anticipated titles, as well as games that did very well overseas, like the God Eater hunting games and the next Legend of Heroes are all coming to it. Sure, some of these, most even, are multiplatform releases, but that doesn't not make them Vita releases. If that was how it worked, then the other platforms they were on aren't valid either, and those games aren't releasing on anything. It's silly to look at it that way. 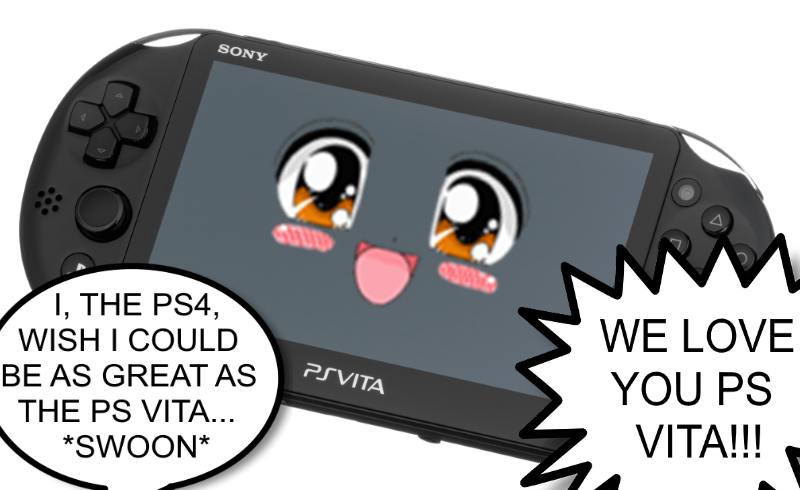 The fact is, the Vita's not just getting games, it's getting good games. No, not exclusive games, but quality should beat exclusivity, I say. No, it's not getting the content first or even particularly timely in some cases. There's the possibility some of the games it has announced for it have become vaporware or been canceled. Fun fact: there were a good hundred or so indies I chose to not include to this image because it looked like many of them had gone that route. But a lot of them won't, and because they won't, it's going to continue to be a machine with a lot of games to play.

Maybe they're not games everyone wants. Maybe not games even a particularly large amount of people want. Really though? So what? A game is a game. We're not talking about how to save the console here, we're talking about whether or not it has content, and more specifically, if it has upcoming content. So does it? Yes.

And personally speaking, much as I've gone on about tastes and blah blah horseshit blah, a whole lot of it is gonna worth picking up too.

Now if you do want to talk about "saving" the Vita, maybe if folks had bothered to acknowledge this fact, Sony itself included (Sony especially in fact), the Vita might have been better off, but that's another matter. Not one I'm here to discuss, either!

So with this text wall out of the way, have a fun E3, folks! 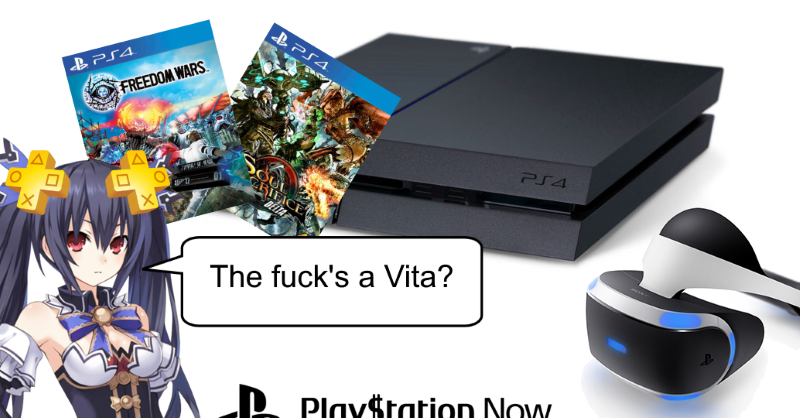