Hello my fellow dtoiders! I haven't been around here too much lately due to dealing with some stuff but now I'm sorta over the slump I've been in. Been getting a lot of stuff done, finally recoverd from my fractured pelvis and even should be heading back to work soon. So as a little reward for myself I went and had a fantastic weekend at FanimeCon. 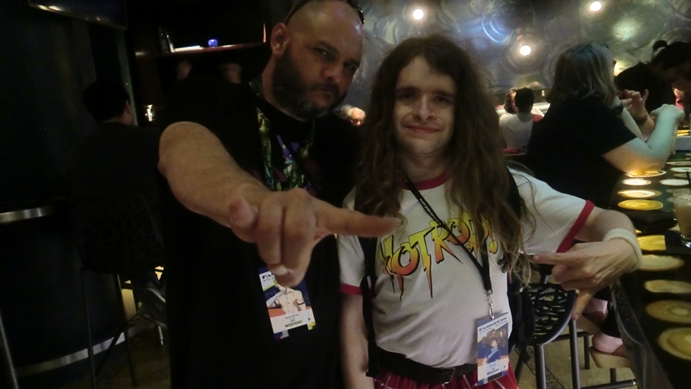 I've been to FanimeCon 3 years now and every year seems to be a bit better and better. This year was no exception as I had an absolute blast. All four days were fantastic and I'm incredibly glad I got to go. I did so many cool things, got to meet such amazing people and got all sorts of fantastic goodies. I even dressed up this year, though the only costume I had on hand was my Rowdy Roddy Piper outfit from Halloween. If anyone happens to be in the Bay Area during Memorial Day weekend, I highly recommend checking it out.

Friday was the shortest day for me as I unfortunately had a little hiccup the night before and had to take my mother to the hospital at 3 in the morning, of course not getting out til 9 in the morning. Luckily she's okay but as a result I was already exhausted before the convention even started. So I slept til about 4 in the afternoon and got there around 5 not getting my badge til about 7 since the line was ridiculous. 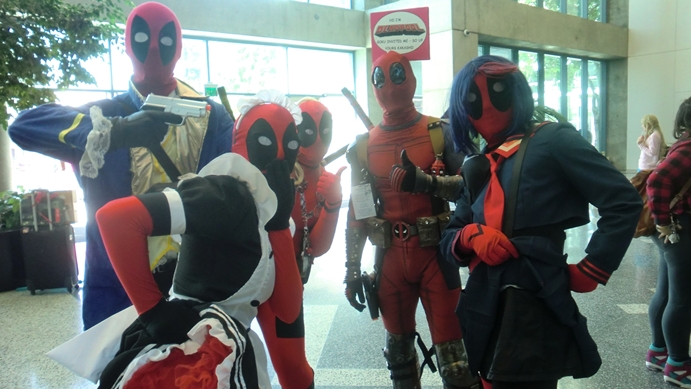 After that whole shpiel though it was smooth sailing. From there I went to the Swap Meet since I hadn't been able to got the last two years. The vendors there had all sorts of neat stuff for incredibly cheap. Among them, I got Rise of the Kasai brand new in the wrapper for $4, Luigi's Mansion Dark Moon brand new for $20 and the Animatrix for $1. The biggest prize of them all though was this Jesse Ventura Action Figure I got for $10. The guy who sold it to me saw my Roddy Piper outfit and cut me a deal. 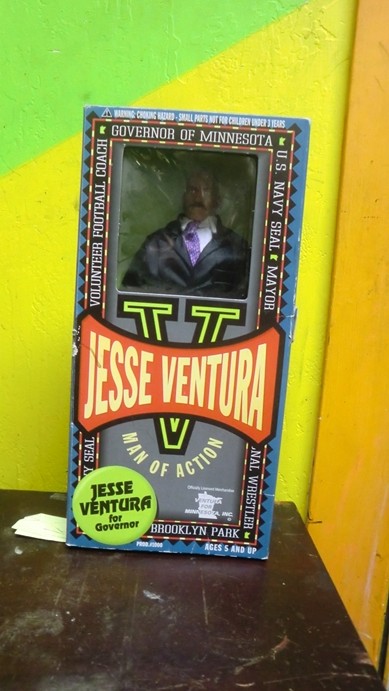 After that there was supposed to be a Bible Black Live Dub panel but it unfortunately got cancelled at the last minute, so instead I went to the Illustrating Eroge panel with Yoshitori Watanabe, who did all the character design for Valkyrie Choukyou Semen (which I highly recommend). He showed off how he does a lot of the initial sketches and how he goes about creating some of the different layers and such which is something I was honestly interested in.

Saturday was probably the best day of the con for me. The first panel I went to was the Games with Guests panel with Cristina Vee and Lisle Wilkerson. I had watched some of the games panels before but I never tried entering as I never thought I really knew enough to win anything, but I decided that day was my day and decided to try. I turned out to be amazingly right as I was the first player picked to go on stage along with 7 other contestants.

From the 8 people that were chosen 4 of us moved on the play with the guests. I got partnered up with this nice guy (4th from the left in the pic) who I unfortunately can't remember his name but we managed to do really well but still ended up losing by 50 points to Cristina Vee and another contestant. Regardless though from we all won prizes which for me included a Hatsune Miku plushie as well as an invitation to the Meet The Guests brunch the next day. 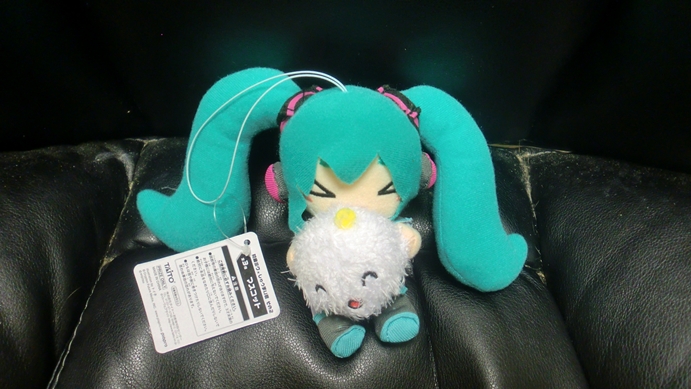 We were also invited to stay til the final round where we could win up to $200. In the final round I managed to beat out the other contestants but the final challenge they gave me was the hardest though as I alone had to answer 23 questions in 3 and a half minutes. The catch though is the questions are multiple choice with two choices each and I had to tell them the wrong answer instead of the right one and if I messed up they start the questions over. I managed to get to 14 in the time limit and they were cool enough to let me try one last time without the time limit. I got to 21 which was still good enough to get me $50 so I won either way. 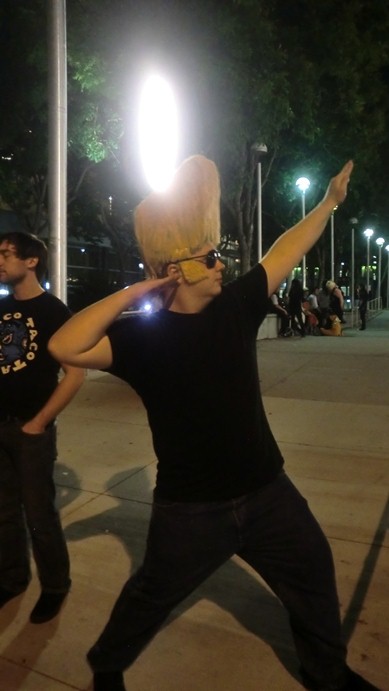 Sunday was the longest day as I was there for over 14 hours doing stuff. I had to be up early that morning to make it to the Meet The Guest Brunch so I got there around 10:00, picked up a few things from the dealers hall and went on over. I met a really sweet girl in line and since we were both by ourselves we decided to pair up for the brunch. The brunch worked with us being rotated between tables occasionally so we could get a chance to coverse with all the guests. Unfortunately we couldn't take pictures or get autographs which is understandable given the format but regardless I had a great time interacting with the guests 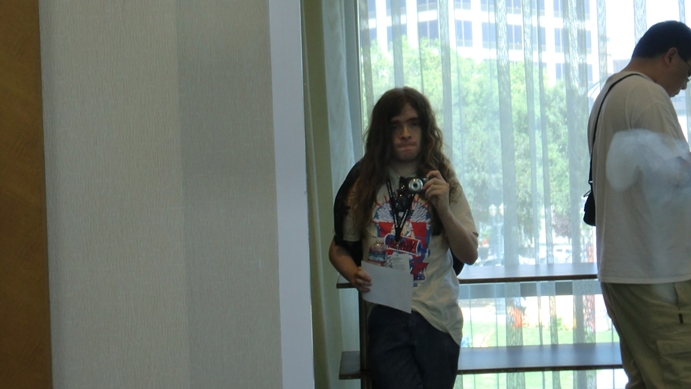 We first got to sit with Masaya Matsukaze who is the Japanese voice of Ryo Hazuki from Shenmue. Unfortunately I actually haven't played Shenmue yet but he was very curteous and kind. Then we sat with Yoshinori Watanabe who I told I thought his panel was very informative and he was pretty stoked. We then sat next to Da-Ice who are a pop band from Japan. I wasn't really familiar with their music but they were all very cool and even asked us more questions than we did them. Finally we sat with Cristina Vee and Lisle Wilkerson who were both incredibly sweet. We talked a bit about Voice Acting and comparing acting for games vs. acting for anime. Overall it was inredibly awesome to be able to interact with all the guests in that format.

Afterwards since I hadn't gotten a chance to get anyones autograph yet I went to Lisle Wilkersons signing. She was hands down one of the sweetest women I have ever met and she was so awesome taking time with each fan to chat a bit and answer their questions and take a picture. I had wanted to bring my copy of Tekken Tag Tournament 2 for her to sign (Zafina is my girl) but I had rushed out the door that morning. That said she said she'd be there tomorrow and if I found her she would be more than happy to sign it. I chatted with her a bit and got a picture taken with her. 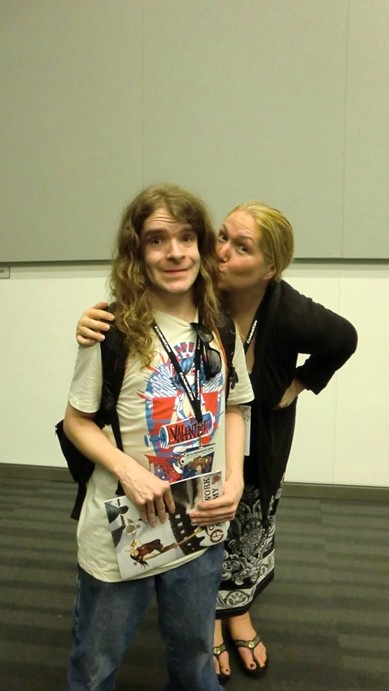 I wanted to get Cristina Vee's autograph too but the line for her autographs had to get cut off as it was getting super long and she was on a tight schedule. Regardless though I still got to do trivia and eat brunch with her so I still lucked out and she was also incredibly cool.

From there I finally decided to hit the Artist Alley and Dealers Hall a bit since I hadn't really had a chance to. I tons more art prints this year (which will be in the next blog) and all sorts of goodies from the dealers hall. I don't usually get stuff from the Dealer's Hall as a lot of the stuff they have can generally be bough online or elsewhere for cheaper but that said there were a few things that caught my eye that I couldn't resist.

Some of the things I got inlcuded this awesome figure of best Persona 4 girl Marie. 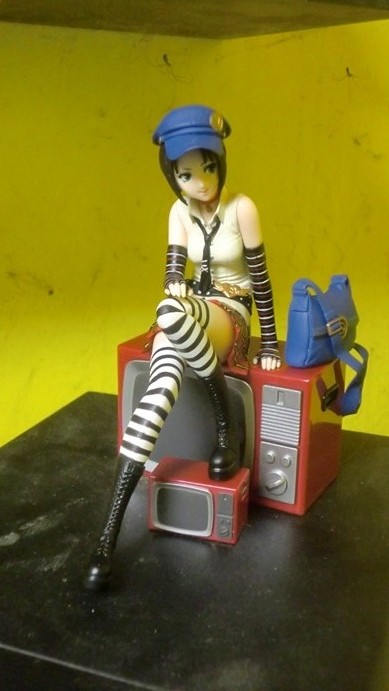 As well as this bad ass Persona 4 fabric poster. This wasn't even on sale at the guys booth, I had to talk him into selling it. It's super nice too, a lot better quality than your average wall scroll. 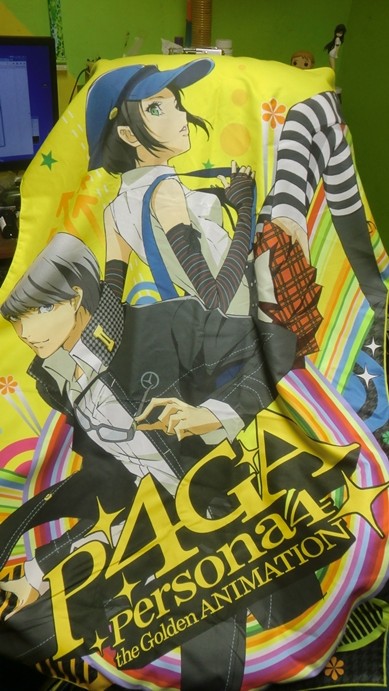 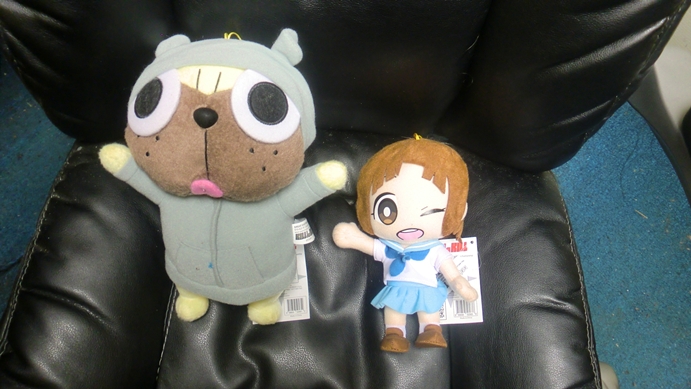 And this book of dirty Kill La Kill art. 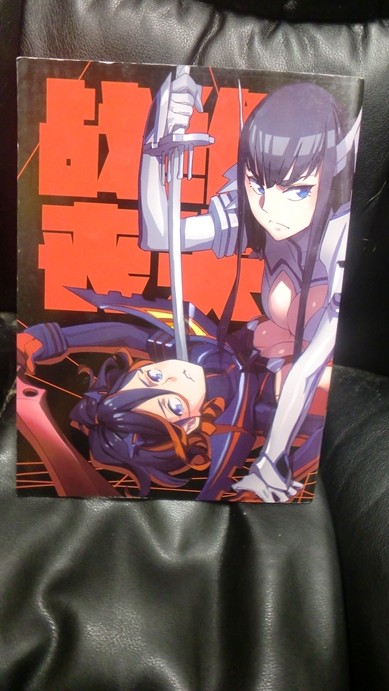 After that was the cosplay Masquerade event which was a big Cosplay contest/stage show. There were all sorts of amazing Cosplays. One in particular I thought was incredible was this Samus that this woman put together all herself. 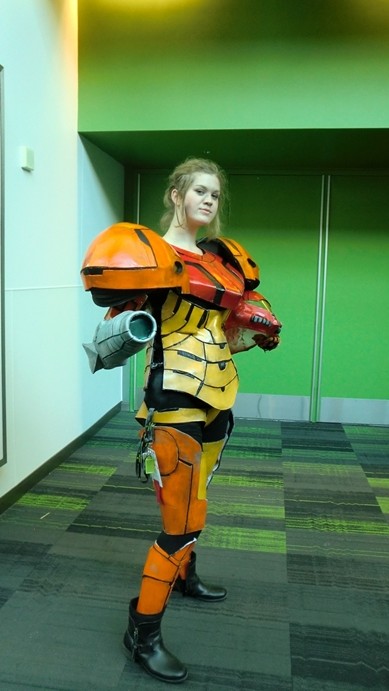 There was also a fantastic band that did all sorts of great renditions of various songs from Anime shows. 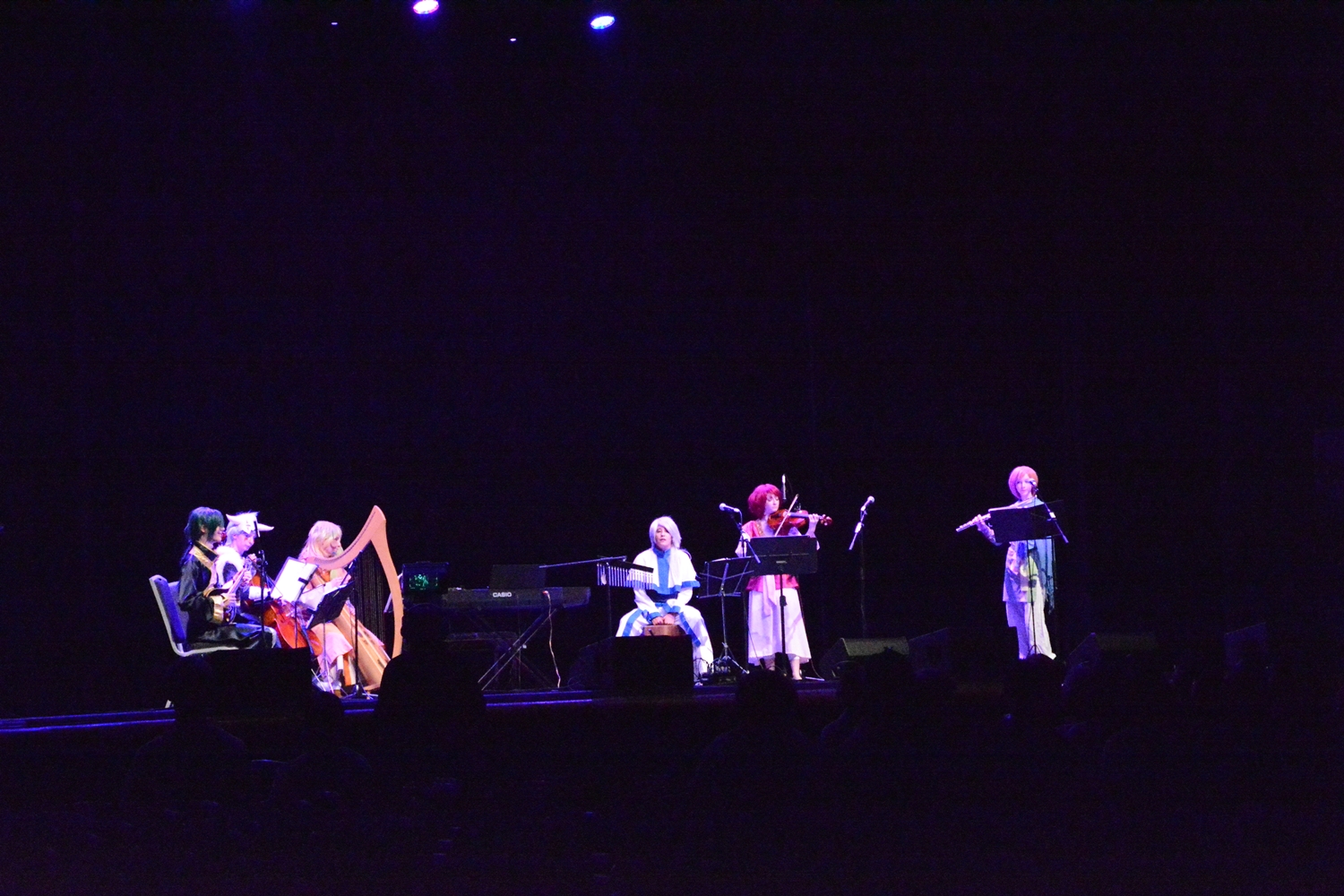 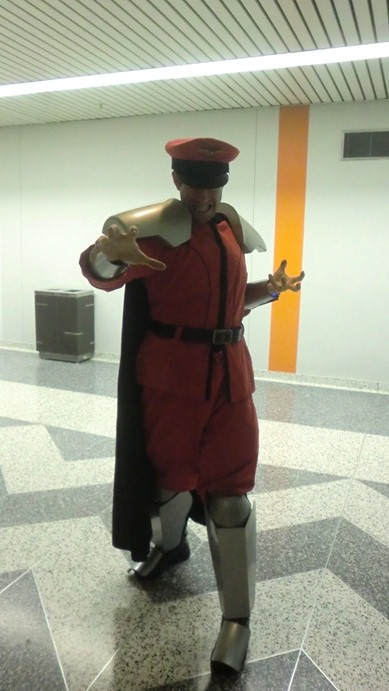 Monday I was pretty much burnt so I took my time getting down there til shortly before the closing ceremonies. After one final quick stroll through the Artist Alley for some last minute art prints, I headed to the closing ceremonies where I actually managed to find Lisle Wilkerson this time managing to remember my copy of Tekken Tag Tournament 2. She was super stoked to see that I brought it and signed it for me giving me a huge hug afterwards. 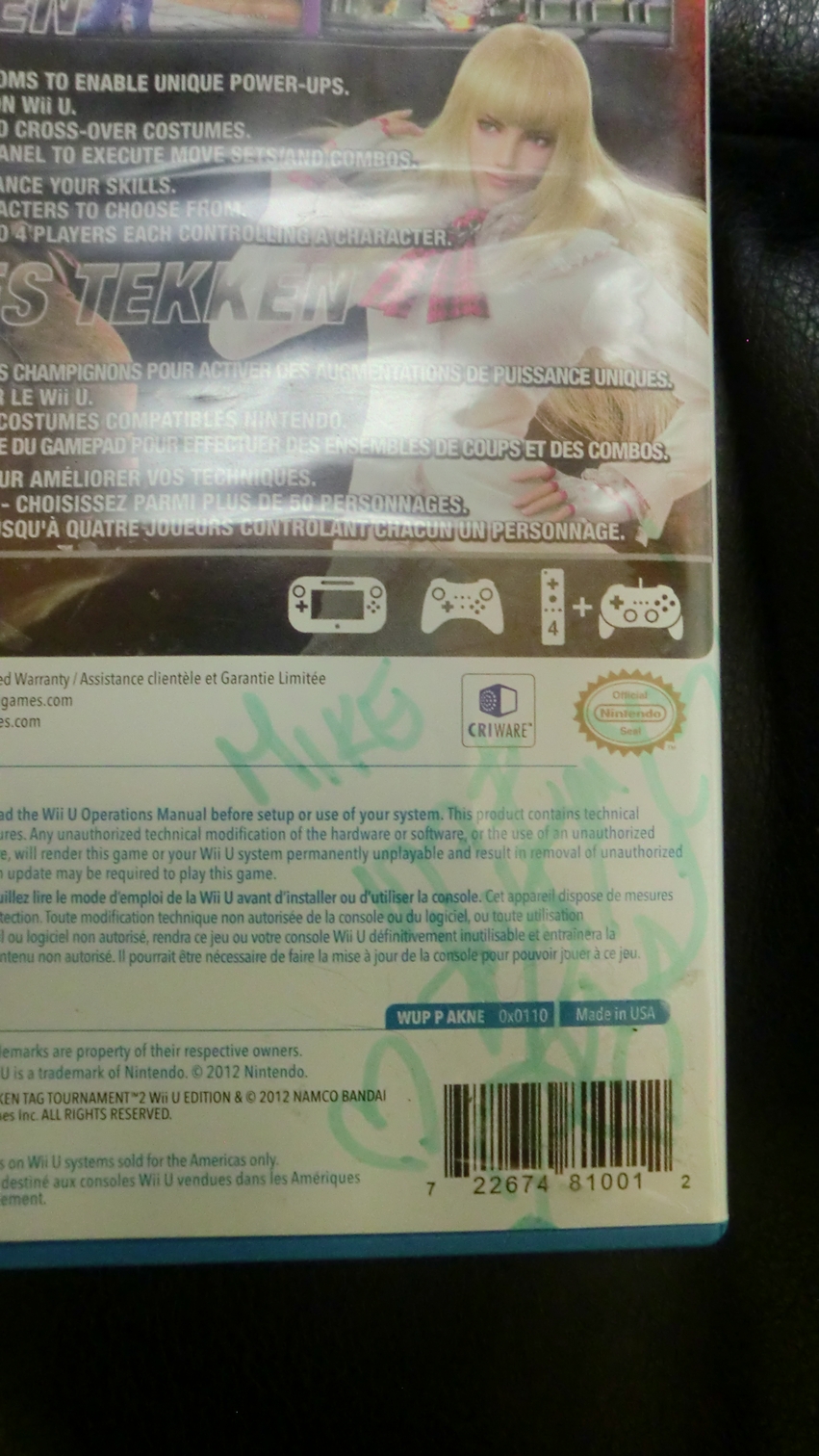 So with my weekend feeling complete I headed to the closing ceremonies from there headed home to finally relax after a fullfilling weekend. 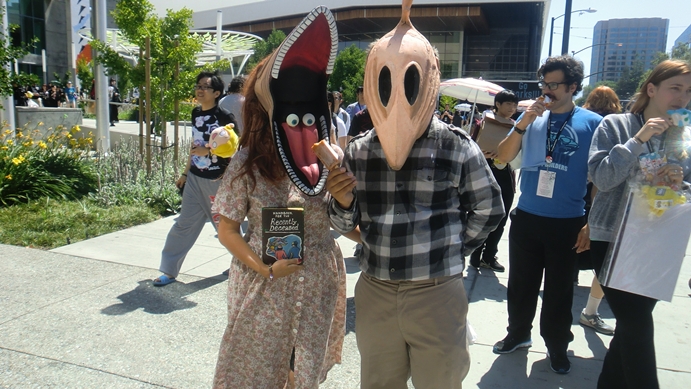