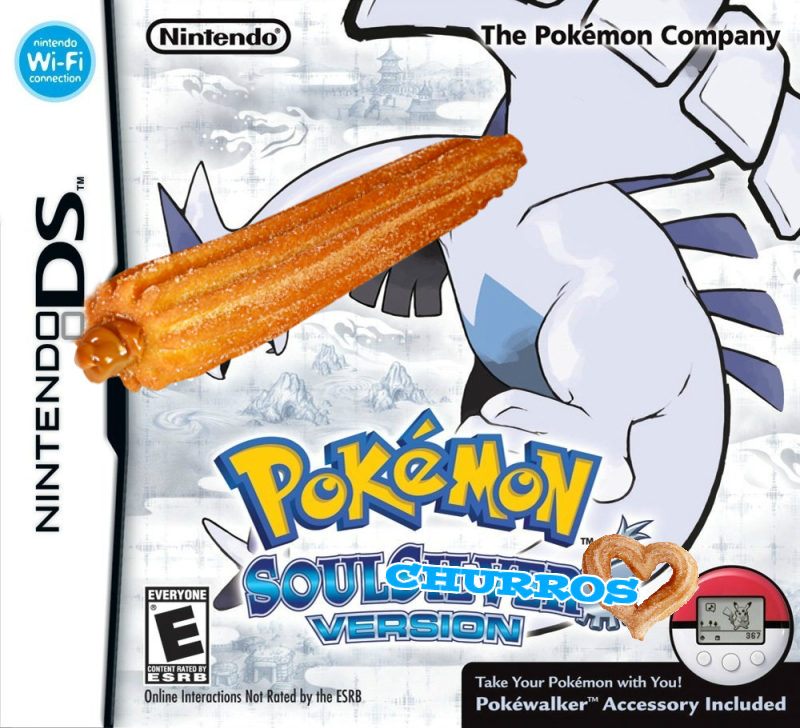 Churroswalker not included and sold separetely

When Lucas Blight (or was it Rico?) announced that he was going to make a top 20 favorite Pokémon blog post, I knew I had to make one myself. Heck, I usually can't stop blabbering about Pokémon over the quickposts or the comments sections, so any reason to talk even more about pokémon is a good reason.

I'll be stealing Luca's post format, but I'll be judging the monster with a somewhat different set of rules:

Also, before going into it I'll list the Pokémon games I've played, from first to last:

And I've watched the anime, but only the seasons covering the Kanto league. Looking back now I think it was pretty bad. Origins, in other hand, is as good as it can get.

Gen 6 was the first one where I got the game at release and played it completely blind. Turns out that discovering new pokémons in game was one of the best gaming experiences ever!

Also, look at this guy. It is a lil' psychic gifted kitten with shaggy hair. It is SO CUTE with it big, happy and totally traumatizing eyes!

It sadly never ended up getting in my team. I picked up Honedge instead, wich is another great pokémon. Too bad Espurr evolutions are not as cute as it is!

Ok, I may have a thing with bugs. Not bug pokémons, invertebrates in general, wich may or may not involve a magazine I used to buy voraciouslly when younger that was all about invertebrate biology for kids.

Anyway, I like this one because it looks amazing. It is a big fat moth with a big bug butt, beautiful wings, fluffy coat, weird horn-antennae things and sci-fi coumpund eyes. And on top of that, I've heard it is a very strong pokémon! I definitely want to train one of these someday.

This one is a childhood favorite. It was my favorite legendary back when there only was 151 pokémons. Never actually trained it, but I find its design beautiful. Look at the chest fluff! Look this completely fabulous tail! Simply beautiful.

Ah, the rainbow fiery chicken. Ho-oh is part of my favorite legendary group. I really dig its design, it is colorful and pretty and also looks very powerful and it's not overdesigned like some later legendaries. Sacred Flame is a really cool move that fits Ho-oh well.

At first I saw the static 2D art for it anf thought its design was pure, destiled shit. Then I got to see it moving and oh boy I was converted. It is so god damn adorbs that I want to explode.

Look those floppy frills/ears! Look how happy and dancey it is! Now look how cool he and his earfrills looks when attacking!

Too bad it doesn't look quite as charming after evolving. I think it was a recurring theme for me on Gen 6.

Who would think those annoyingly overabundant Zubats would turn out to be so cool and strong after fully evolved? It is fast, it hits hard and it has two sets of wings.

To me Gen 5 was the generation with the biggest ammount of fugly pokémon designs. That said, at least when a design was good in Gen 5, chances are it was pretty damn amazing. Like this fellow here. It is a smug fatty bug that kicks some serious ass, and I had a blast using it.

I always liked its design because I love cicada skins in real life, so to me liking this one was the next logical step. Then one day I started playing Emerald and finally got to use it. 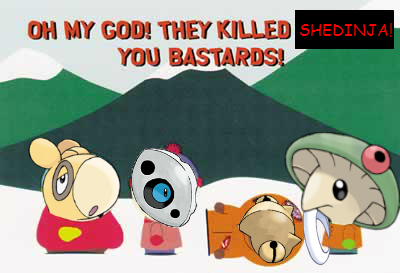 A lot of its magic was lost to me because of how hard it was to actually use it in battles, it was really frustrating and it was eating revives as if they were M&M's. That is, until earlier yesterday, when EVERYTHING changed.

I had just finished solving Team Aqua's and Magma's shenanigans for good, when I thought: "Hey, I should go back to Sky Pillar and get Rayquaza!". After lots of frustration involving trying to steer the match bike using the emulator's virtual touch d-pad, I finally made it to the top. But there was one last problem: I wasn't expecting that Rayquaza would be at a whooping lvl 70! My team was at lvl 45 and wouldn't stand a chance.

But then I thought again about how awful the climb was. No. Never again. Let's catch Rayquaza.

Shedinja was an amazing tank. Or a wonder tank, dare I say. Outrage and Extremespeed didn't even made a scratch, and the only dangerous move - Fly - was a two turn move, so I could easily switch and make Aggron take it for the team. 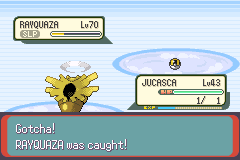 After many tryes the dragon was slain captured. The last Rayquaza in the galaxy was in captivity.

Shedinja had won its family's honour - and my love - back.

It is a simple design that reminds me of Gen 1. It is overly adorable and when it evolves it still looks good and can get VERY strong! Used it on Black and Y and 10/10 would use it again.

This one is my favorite initial area bird ever, and I dig it since it was revealed. He is so small and cute! His evolved forms are really cool and strong too and I like them both, but this lil' guy still my favorite one!

I usually am not much found of fighting pokémon, but this one is a bug so it is ok! Also, he is crazy strong, and I had lots of fun back in SoulSilver using the totally amazing Megahorn, Aerial Ace and Brick Break. And you can drop one of these very early in the game using Headbutt! Did I mentioned it looks like a very cool beetle? Yes it does.

And after I just said how rare is liking fighting pokémons to me and then now there is a second one. But how wouldn't I like it? It is a dorky looking fighting mushroom dinosaur!

In Emerald it was the first time ever that I've ever boxed a starter (never was too much found of Hoenn starters to be honest), and I consider this one my unofficial starter. He is doing great so far, Sky Uppercutting, Giga Draining and Headbutting our way to victory. And look at his cute, dumb face! I wanna hug it, but then I would probably get a random status ailment so I guess it isn't a bright idea.

It is a freaking turtle with water cannons on its back.

Charizard can go eat a bag of poképuffs.

Lugia is hands down my favorite legendary pokémon. He looks mighty, ins't overdesigned and is kind of like a giant sea monster (even though it is a psychic poké).

Also, Aeroblast had an amazing animation back on Gen 2.

When this one was revealed I didn't liked its design at first. The stick in its butt was weird, and the ear hair was even weirder.

But once I got to see it being WAY TOO MUCH CUTE during battles and in the Pokémon Amie, I completely changed my mind. And the stick wand / broom was really clever design.

The ear hair still weird as fuck, though.

It is cute and elegant, and I love its design. The new typing and an awesome mega evolution on Gen 6 were the icing on the cake too!

I promised myself that I would only train pokémons I've never used before on Emerald, so I got a little bit sad when I caught a Raltz and had to box it.

Type: Fire (Another one? Weird, I'm not even too much of a fire type fan)

Silver Version was the very first pokémon game I have ever played, so naturally Cyndaquill and his evolutionary family have a huge space in my heart as the first starters. The volcano weasel is my favorite starter pokémon ever.

Back in my childhood when I still watched the Gen 1 anime, Poliwrath was my favorite pokémon. I even got a set of really well made small Poli figures that I have to find again and put on my desk (damn you, house renovation!)

But as I got older I started liking Poliwag more. Have no idea why!

Another cool thing about going blindly into Gen 6 was finding out this little guy hiding on the swamps. You know love at first sight? That was exactly what I've felt.

He is very goofy and very adorable and I like it very very much.

Now, finally, the moment everyone was waiting for.

We are almost there.

Wait this ins't surprising at all, why am I trying to build suspense? 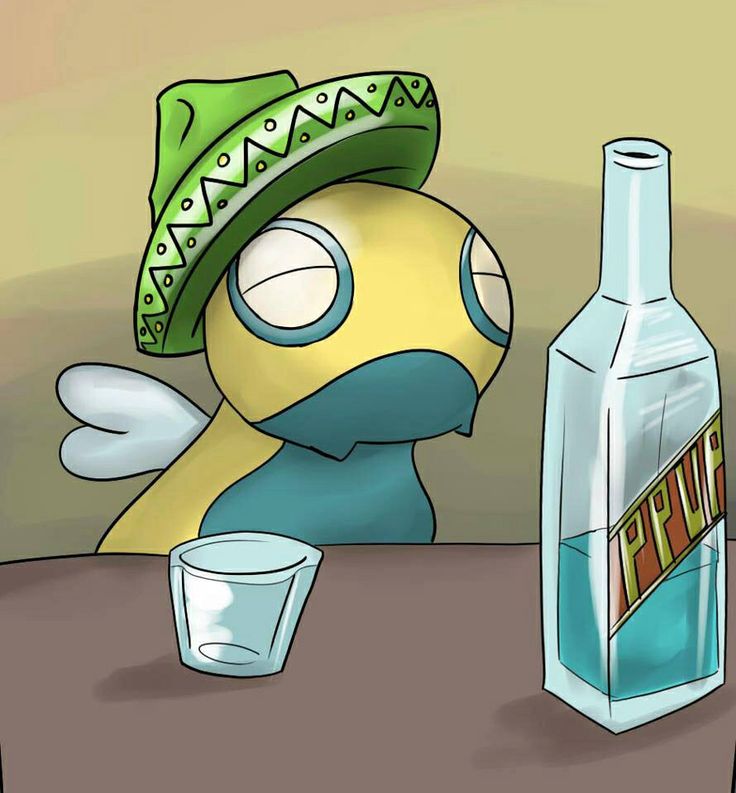 The funny thing is, back when I played Silver I didn't care too much about this one. I only started liking it after resetted and started playing my Crystal version again in 2009. Since them it is a staple in my teams, because I love it very much.

It may not be the strongest, or the bulkiest, or the faster pokémon, but with it's Serene Grace ability I love to paraflinch the hell out of the oponents. It doesn't always work, but when it works it is so much fun. Only for me. It must really suck to be at the receiving side. And Glare received a welcome accuracy boost on Gen 6, so goodbye Thunder Wave.

It is chubby, it is always with its eyes closed, it have little useless wings and a drill tail made for digging, and little pointy fangs. It is the cutest thing ever.

So that is it! Hope you enjoyed it. Feel free to make one of these too! I think the more people write and share their own lists, the better.