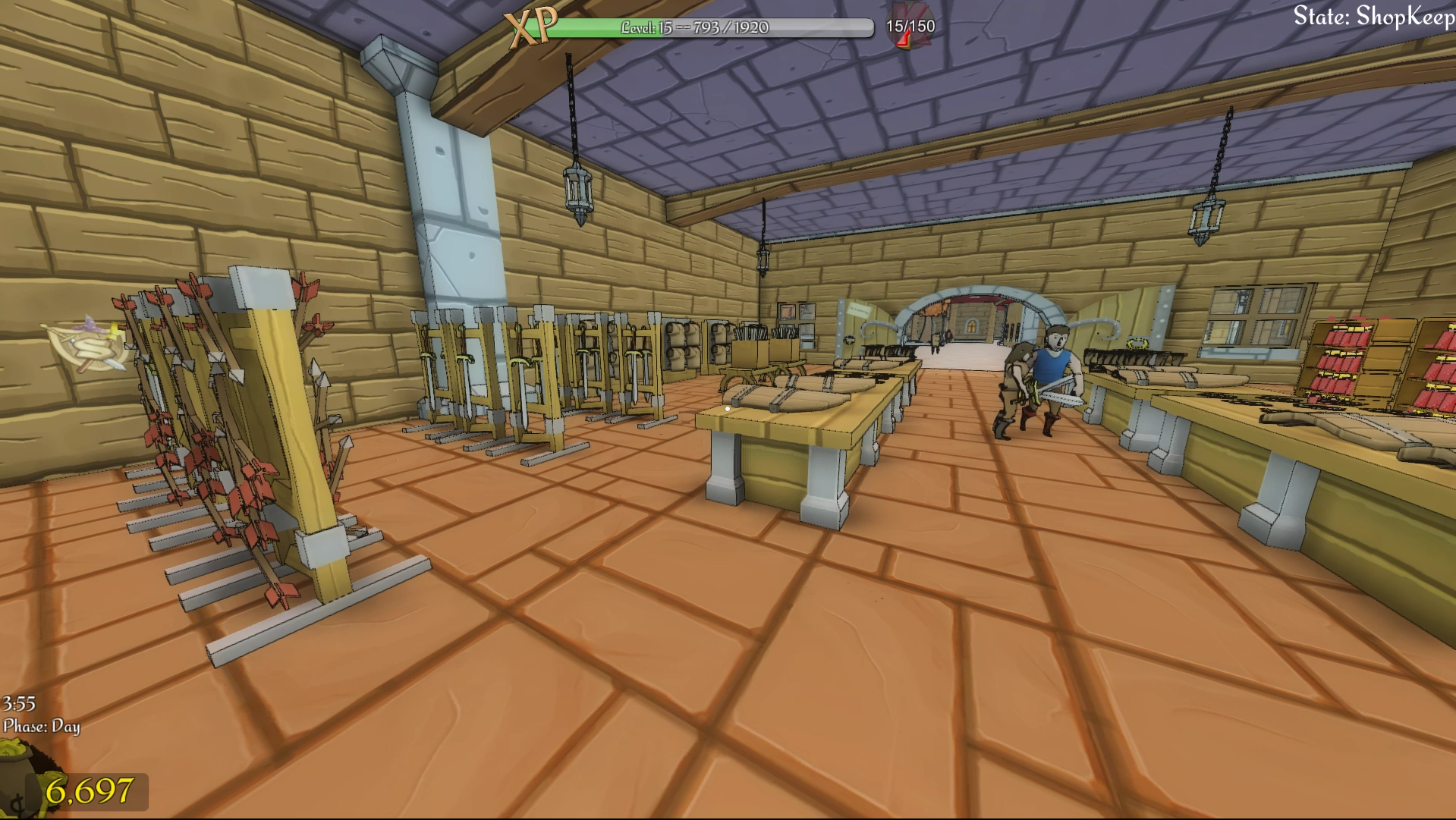 The basic goal of Shoppe Keep is to run a successful item shop and grow and expand your business to become the best shop in town. You start off humbly with only one small room to setup your displays and a backroom where you receive your ordered items. In the display rooms you can build furniture to display your wares for adventures to peruse and purchase and place decorative items to distract your customers from figuring out just how overpriced your items really are. Once you are satisfied with your store layout and have placed all of your scandalously marked up goods on display, you can open your doors and start the day. 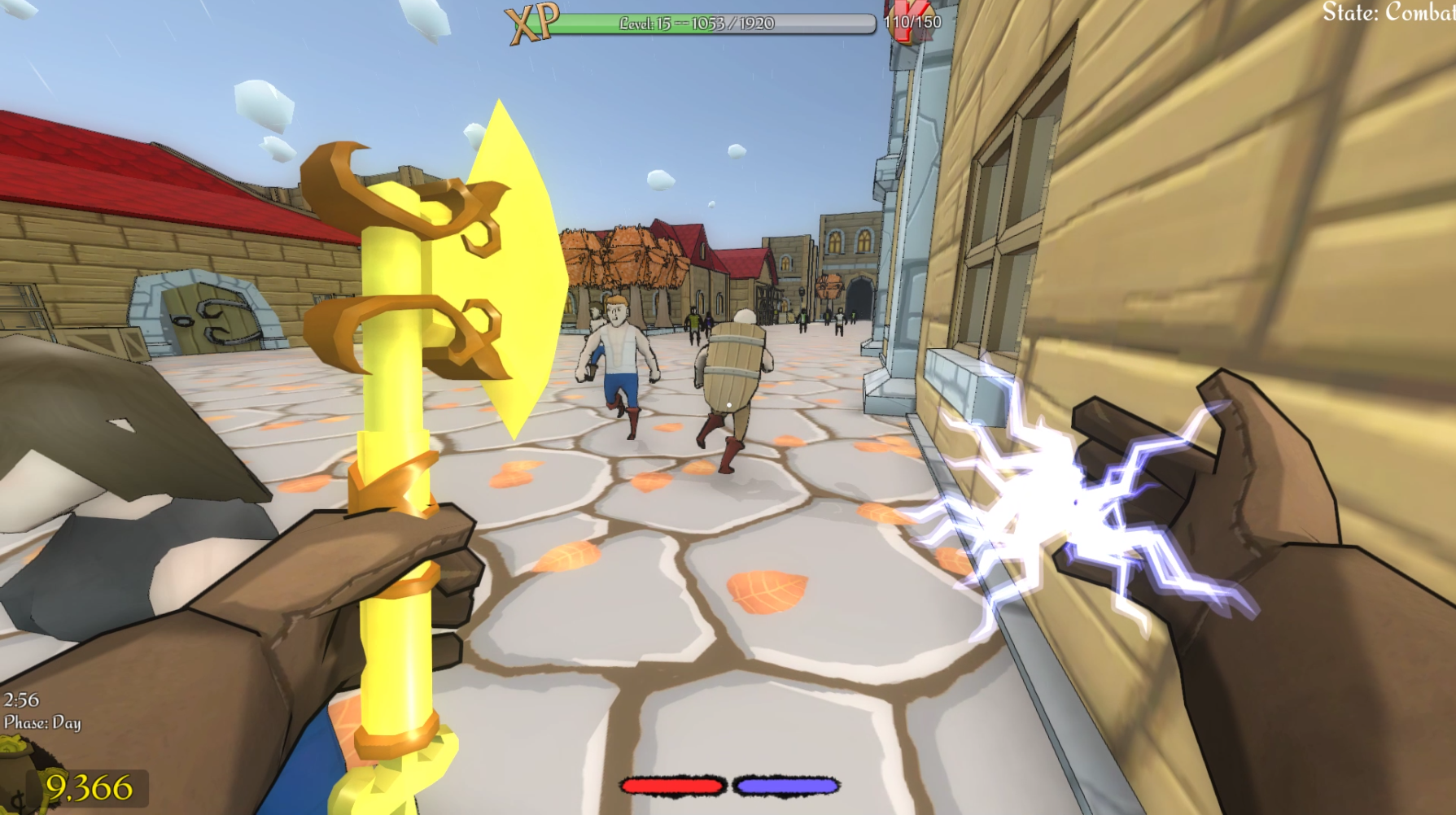 The day is broken into three segments (morning, day, and evening) each lasting five minutes. During this time mages, wizards, rogues, and warriors will make their way to your shop to buy stuff. Morning starts off a little slow, but look out for the day segment when the floodgates open and customers start swarming. It begins to slow in the evening, ending with the mass panic of people scattering to the winds when the clock runs out. During open hours, you will have to be watching your stock of items and periodically order more to refill the shelves, otherwise your clientele will start to leave and look elsewhere for goods. If you become really popular, barbarians will show up to destroy your displays and generally wreak havoc until disposed of. You also have to watch for sneaky…okay well less than sneaky thieves trying to steal from you. When someone steals from you they immediately voice their regret aloud and break into a sprint for one of the three exits to the town. Naturally you have to do what any respected seller of fine goods should do in this situation, bury an axe into the skull of the thieving wretch or disintegrate them with magic! Funnily enough, when you kill someone with melee everyone will run screaming from your shop in terror, though reducing the thief to smoldering skeletal remains immediately in front of someone wont cause so much as wayward glance. Also, you do have to be careful at closing time as the frightened running of NPC’s at the end of the day looks strikingly similar to people trying to get away with stealing. Suffice to say there may or may not have been a small massacre of townsfolk at the conclusion of first day due to this…misunderstanding. 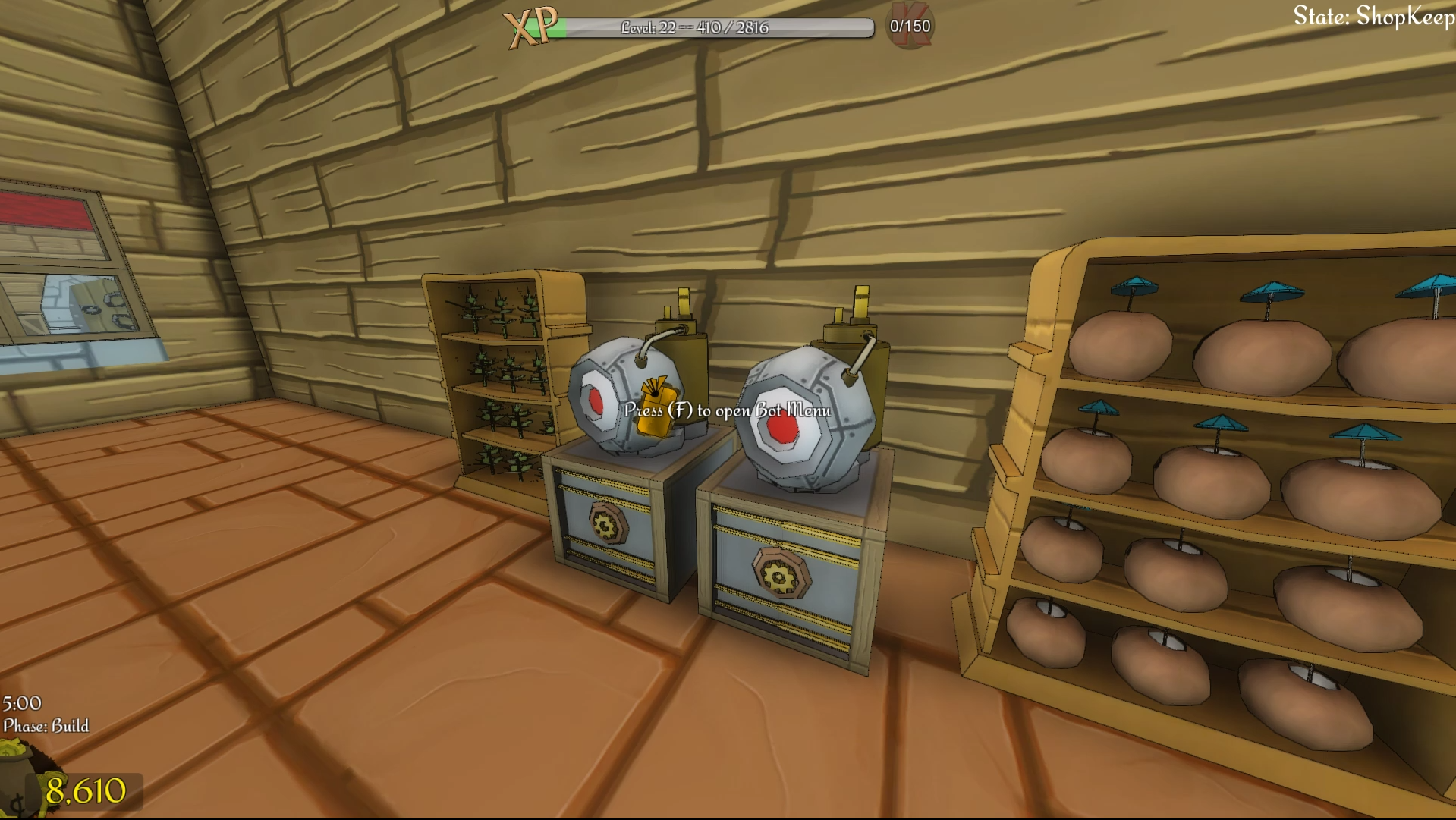 Once your doors close for the day, you are given the chance to breathe and restock your shelves for the next day, repair worn down displays (restocking reduces durability rating until fixed), re-arrange your layout, expand your shop using your earnings, and purchase upgrades. Upgrades can be purchased using kPoints that are obtained by selling items, leveling up, and completing daily challenges that involve selling certain types or sets of goods to travelers. These upgrades help you expand your operation, from making your store more popular and allowing you to charge more for your wares to unlocking more items and displays. One of these upgrades is the ability to purchase helper bots that can pick up dropped items, restock shelves for you, and also serves as judge, jury, and…ahem, executioner for those pesky thieves. They do cost money per minute of usage to operate, but are inevitably invaluable to smoothly running your shop. You can also unlock a garden where you can cultivate various crops including mushrooms, beets, and weed. Druids love dat hash bro.

Although you can subsist and even thrive on selling the basic items available from the ordering menu, big money can be made from making special items with the help of the grinder, cauldron, and your trusty hired champion. Each is available as an upgrade and completes a step on the path to making truly wonderful high value items. The champion will go on daring adventures to far off lands for you for a small fee and will bring back precious loot for you. You can outfit him with armor, weapons, and health and mana potions to be better prepared for the missions he goes on, and as such increase the chances of him coming back in one piece. You can use the grinder to liquefy items into basic components. Sometimes the items needed to get the basic materials are cheap while others will send a sharp pain directly into your wallet. As an added note, you can unlock the ability to move bodies around…and one of the base materials the grinder stores is bone…I am sure you can connect the dots. Finally, the cauldron is where you combine items and basic materials to make the magical items that your customers will come from far and wide to purchase. Unfortunately, the order in which you add items is vital and will destroy the items if incorrectly arranged.

One of the best parts of the game is the little morsels of comedy dispersed throughout the game. Humorous item descriptions, hilarious reactions to overpriced goods, and entertaining challenge descriptions are sources of more than a few chuckles throughout your play through. My personal favorite is the challenge where you have to try to sell 30 units of weed, the flavor text reads “Just Don’t Be Weird About It”. Your character also does not possess the ability to jump, and if you try a disembodied voice reprimands you and tells you anything from “Jumping is For Jokers” to “Stop Trying, It’s Not Going to Work!”. All in all, its these little touches of comedy really make for a solid game. 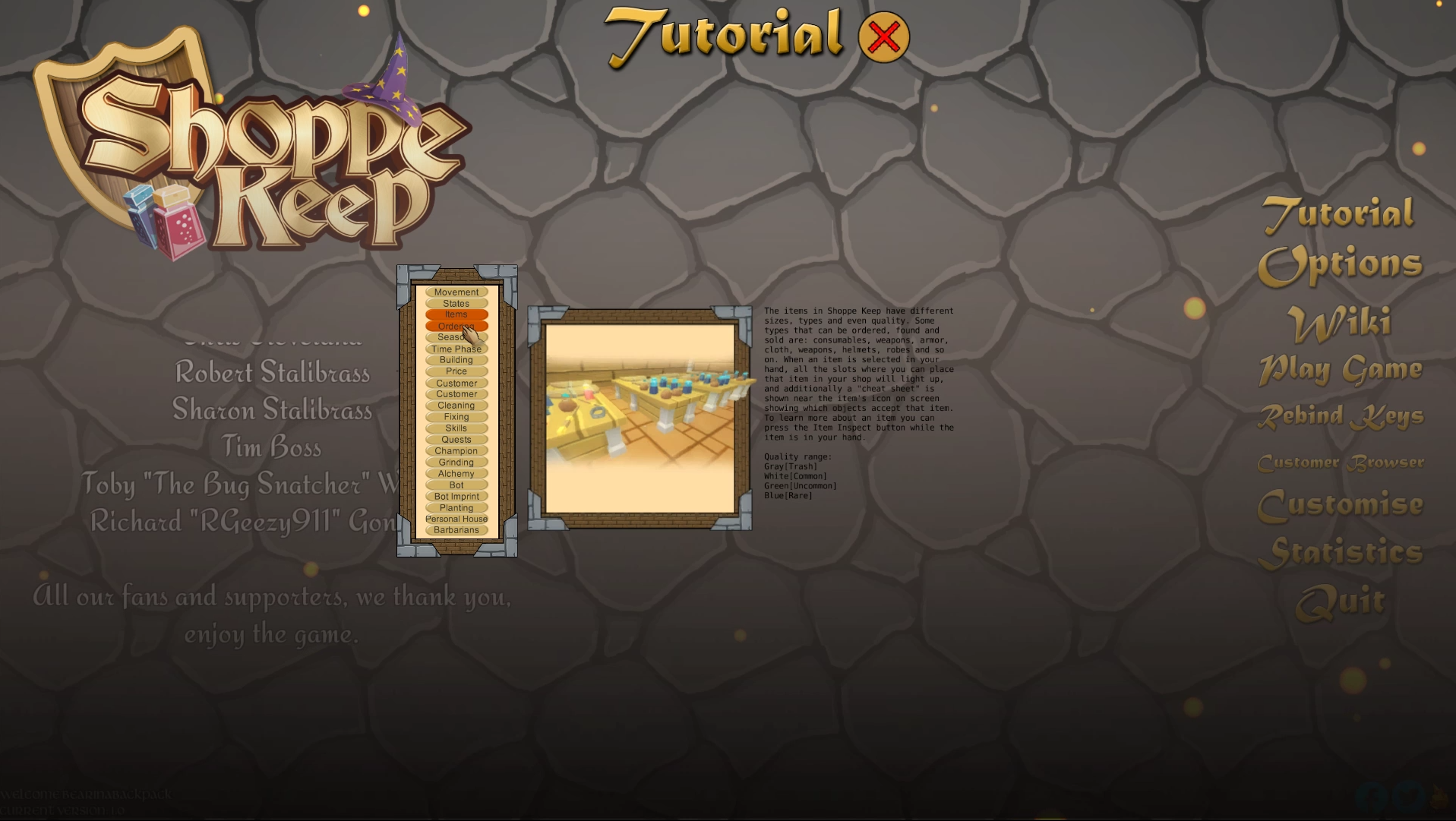 Of course, not everything in Shoppe Keep is Sunshine and Lightning Bolts. Although Shoppe Keep is now fully released, it is still a work in progress.  Customers can glitch out from time to time, sometimes vibrating their way out of the shop after purchasing something. It is next to impossible to reload the helper bots inventory during the day as you can only interact with the storage cabinet while it is docked which will basically not happen with customers constantly removing items from the displays. The main menu is cluttered and not very well organized and suffers from widely varying font sizes that emphasize most things other than play game. There is also no real in-game tutorial segment, which for a game with as many moving parts as this one, seems like a bit of an oversight. Now there is a text tutorial available, which does cover everything fairly well (except for crafting…so little detail…so many items wasted), but it takes a while to get through and is kind of a hassle in lieu of an in-game walkthrough of the game mechanics as they come up.

Upon listening to the music of Shoppe Keep, you can immediately tell that time and care was put into making the music really fit the motif of the game. Each section of the game has its own unique music. The morning phase is scored by a calm, almost sleepy soundtrack that quickly becomes hectic and busy as you transition into the day phase. When barbarians attack, the music switches to aggressive battle music. Although there are default songs for each phase, you can customize the music with several alternate tracks including musical options for the winter season once you unlock the record player. All of the music maintains the medieval fantasy vibe using drums, flutes, strings, and other instruments typical of RPG game scores. The sounds effects are similarly well done, with nearly all items having a unique sound and the customers making comments as they go about shopping around your store, including insulting you if they find your items too pricey for their tastes. An annoyed “What the *bleep*” every once and awhile is a wonderful sound cue that perhaps marking up your wares by 210% might be a bit steep. 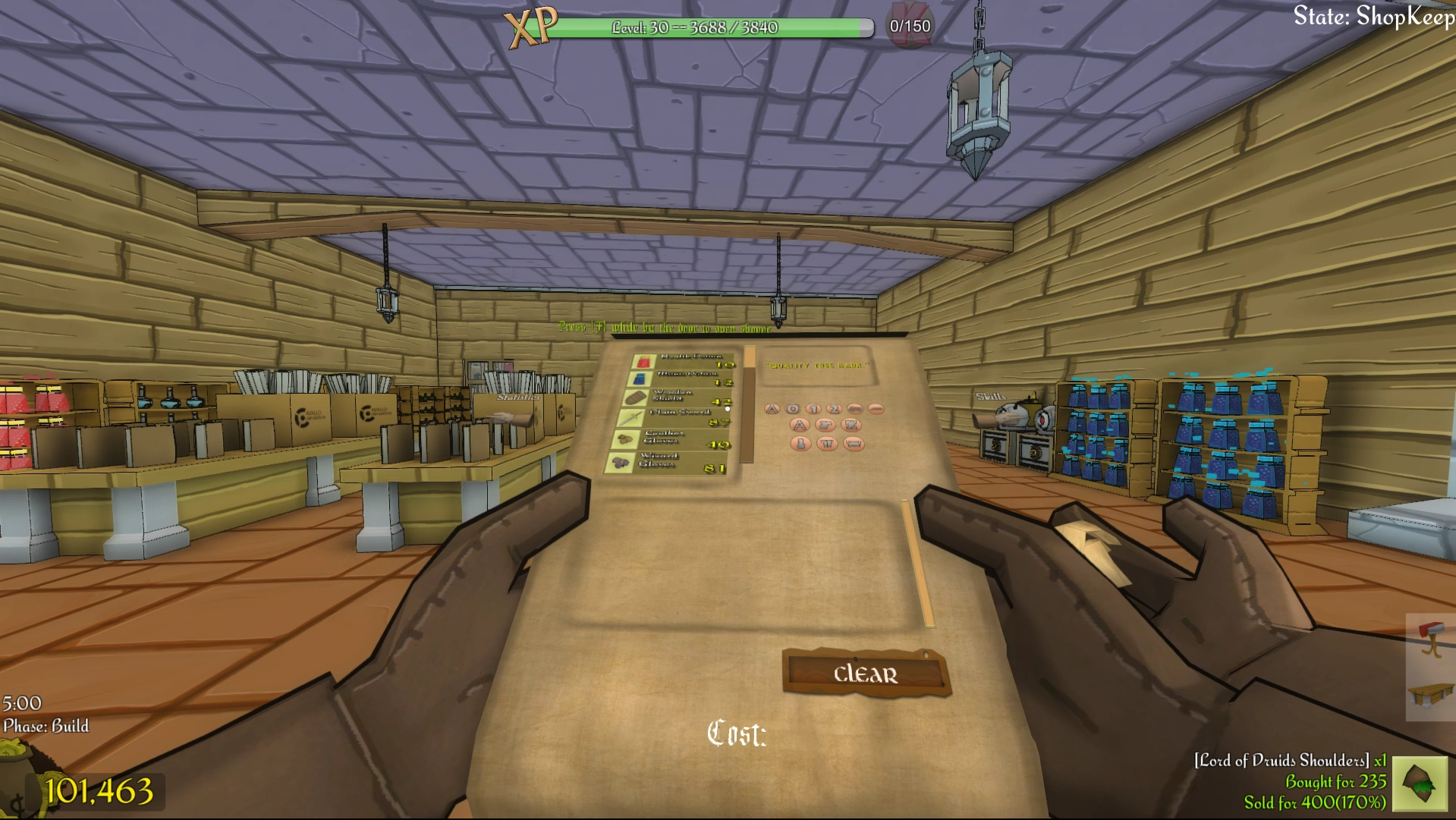 Shoppe Keep uses cell shading as its artistic style, and though it is not groundbreaking by any stretch of the imagination, it is perfect for the feel of the game. The cartoony feel that comes from the cell shading technique fits well with the comedic RPG setting, and helps to tie everything together. The animations are fairly basic but look good overall. The changing of the seasons is a nice addition as well, making it feel like actual time is passing as your progress through the days. As mentioned before the design of the main menu needs reworking, but other than that only major graphical issue I encountered was having three arms if you try to check your invoice while holding something, since the outstretched arm stays that way until you switch to not holding something. I mean, I suppose three arms could come in handy for stocking shelves…