Using Amiibo to Predict the Outcome of E3 2016 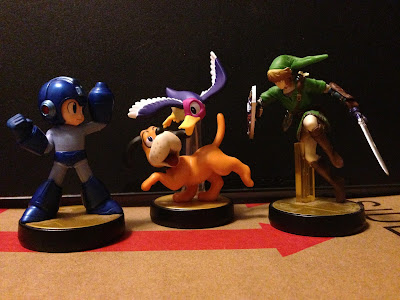 Every June when E3 rolls around, we gamers start getting really excited. Our hearts swell with anticipation and our minds race with the possibilities of what might be. It's a great time for every gamer because no matter what you play there's something new for you to be excited about.

But who cares about that! What really matters is who wins! Is it going to be Sony, Microsoft, or Nintendo? You see, E3 is both Gamer Christmas and the Gamer Superbowl. So I've devised a foolproof way to predict the winner: amiibo. For the last several days I've been training three amiibo to do battle, with the winner clearly destined to have the best showing at E3. Each has their own unique statistics, and each received unique training, but through rigorous testing I made sure each combatant had an equal chance for ultimate victory. Early matches pitted the three against each other, then they went on to individual CPU training, and finally, a few practice matches for balancing. I did not interact with these guys at all, and everything they learned was from the computer and other amiibo. So, let's meet the contestants! 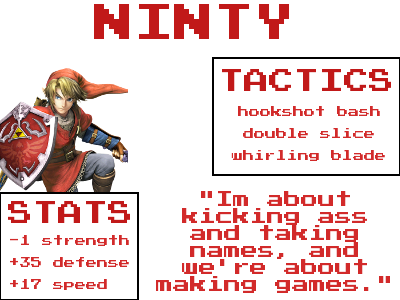 Representing Nintendo is Ninty the Link amiibo, with classic Nintendo red colors, since Nintendo is apparently only showing Zelda this year. I originally had his speed stat way down into the negative zone because, as we know, Nintendo has been slow to get with the times. However, I also gave him a high defense stat because Nintendo is well known to survive hard times. In the end, I had to raise his speed stat into positive territory so I could lower his attack stat to be essentially neutral. It turned out that Ninty was winning way too much because he just couldn't be launched, often surviving upwards of 270% damage before being knocked into the blast zone, and doing too much damage in the process. In all four early training matches between the three amiibo, which spanned his first 16 levels, Ninty won every time because of his ability to survive high levels of damage.
From level 16 to 40, Ninty trained against the CPU masters. Because Ninty was so overconfident and strong at such a young age, he first went up against level 9 Mario... and got his ass kicked over and over. On his third match, curiously, Ninty barely attacked at all, doing a mere 22% damage and choosing to observe his opponent instead. His tactic paid off in the fourth match, as he got the first KO against Mario in what was a close flight. Next, he took on Mario at level 6 which was much more manageable. After winning, he fought a team of both Mario brothers at level 6 and won, then both brothers at level 9 and won.
But to truly overcome the competition, Ninty would have to face his toughest opponent yet: himself. If Ninty could overcome this challenge, he would be ready for his final training... and he did it easily in his first mach. He then went on to a combat simulation with CPU versions of his future amiibo opponents, and won that too. It really seemed like nothing was going to take Ninty down. 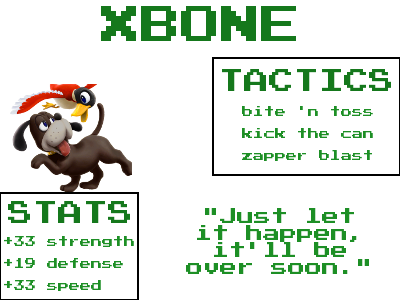 To represent Xbox, I chose Duck Hunt with Banjo-Kazooie colors because it was the closest thing to a Microsoft franchise that Smash Bros had. His special trait was speed because Microsoft has shown to be good at quick reversals in recent years. In his first four training matches, Xbone only managed two KOs and was the first to lose every time. He was also the slowest to level up, only reaching level 13 when his opponents reached 16 and 17. In the end, I raised his attack to be even with his speed. He was still the fastest, but it turned out that only being quick wasn't really an advantage if his hits were weak, just like Ninty being slow didn't hinder him because of his high defense. It was clear, though, that Xbone needed some serious training from real fighting masters.
Xbone's first opponent was veteran street fighter Ryu. I decided to ease him into it because he was a little weakling, but to my surprise he was a quick learner and won every match against Ryu from CPU level 3 though 9. He quickly graduated from Ryu to lvel 9 boxing champ Little Mac and kicked his ass on the first try. Overconfident, Xbone challenged level 9 Captain Falcon and was absolutely destroyed. In a CPU combat simulation against Nintendo and Sony, he was also destroyed until I cranked down the CPU level to 6, at which point he was finally able to win. He came a long way, but would it be enough? 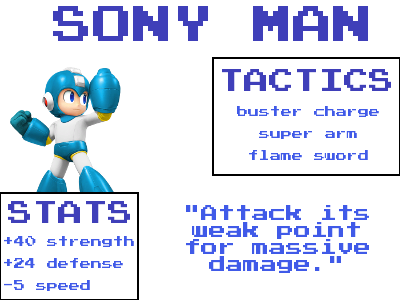 When I first set out to create a fighter to represent Sony, only one person came to mind: Cloud. Then I realized Cloud didn't have an amiibo yet and went with PS4-colored blue and white Mega Man because there were a few exclusive Mega Man games on the PlayStation back in the day. Plus, Mega Man has been about as neglected as the PS Vita these days. Sony Man was given a high attack stat, because Sony has been able to defeat Microsoft at every turn this gen. He was the second-place finisher all along in the first four training matches, and often would even rack up the most KOs. Early on, I actually ended up buffing his defense because he was getting KO'd too easily, which is why his speed ended up in the negative. It didn't seem to break the balancing, though, and his stats stayed the same from then on.
For his master training, he first fought Sonic. Like in the real life 90s, Sony Man crushed Sonic into submission. I started him out on CPU level 6, then quickly jumped to 9 which was a tougher battle but still ended in victory. He won against his second mentor, level 9 Cloud, after only one match. Sony Man went on to win the free-for-all simulation against level 9 CPU versions of Link and Duck Hunt on his first try. Since he was winning so much, I decided to see how he'd fare against a team of opponents. Against the Link and Duck Hunt team, Sony Man was defeated at level 9 and 8, but took them both out at level 7. With such a winning record, Sony Man seemed poised for victory.
FINAL BALANCE TRAINING
It was clear that all three of these amiibo would put up a tough fight, and I couldn't wait to see how it played out. I gave each amiibo one last chance to study their opponents before the final battle by pitting them against each other in one-on-one matches and then a few free-for-all matches. The data here was used to balance the fighters to ensure that each of them had a fair chance of winning. It was at this point that I raised Xbone's attack and Nintey's speed, and lowered Ninty's attack. Sony Man seemed pretty balanced at this pont, so I kept his stats the same.
The practice matches went basically as expected: unpredictable. Each fighter ended up winning at least a couple of fights, so I determined it was time for the final showdown.
THE FINAL BATTLE
I thought for a long time about the perfect battleground. After mulling over whether I should pick Battlefield or Final Destination, I thought of a better idea: Super Mario Maker. What represents the chaos and unpredictability of E3 better than a randomly generated stage? Who knows what would happen! And so things were set for the final 3-stock battle. 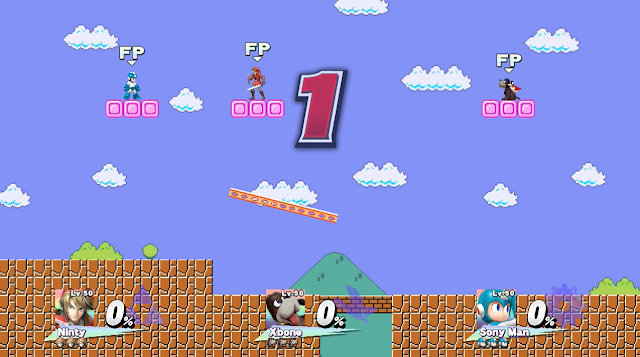 When the stage generated and I knew I was in for an interesting match. It was a very simple walk-off stage! No gimmicks or traps, just a single platform and a few breakable blocks to split the stage in half. My initial though was that Ninty was in trouble here since his specialty was not being launched and the blast lines were now much closer. Regardless, it was actually a pretty hard-fought battle, as each combatant made it down to only one stock. I turned out to be right in the end, though, as Ninty was the first one eliminated.

The final results surprised me, however! Interestingly, Xbone ended up getting two double KOs during the match where he knocked out Ninty and Sony Man at virtually the same time. Still, Xbone's extra life advantage was short lived as he was knocked out shortly after his own kills. With one stock each, the match was pretty dead even, but Sony Man was able to toss Ninty off the side and end him for good. The final battle between Xbone and Sony Man was pretty heated, but Sony Man only lasted about another 30 seconds after eliminating Ninty before Xbone got an excellent smash kill from below and took him out for good. After being the first to lose a stock, Xbone came back with his two double knock outs to win the match. 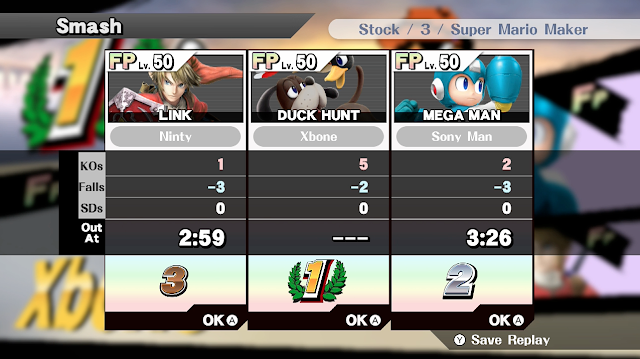 So what did I learn from all this? For one thing, Microsoft is going to win E3 by really wowing us with the Xbox One apparently. It also unfortunately looks like Nintendo's Zelda blowout is not going to be enough to outdo the competition who will no doubt wow with multiple big announcements.

Also, watching amiibo learn to fight is fascinating, especially without any human input.