BREIFS is a series of blog posts where I highlight a short game and explain my thoughts on it without spoiling it too much.

LIEVE OMA is a videogame developed by Florian Veltman for the PC, Mac and Linux, released April 2016.

For me, walking is the ultimate meditative experience. The repetitive movement, the rythmic sound of the footsteps, one after the other, the wind blowing in my ears, my surroundings changing at a pace coherent with my body… it just puts my mind at ease. I’ve also found that walking with other people results in slightly more honest, heartfelt conversation. It’s a relatively intimate setting, but unlike in other one-on-one situations, you’re not expected to talk constantly or respond to something right away. These long seconds or minutes between pieces of conversation let people rumiate and get through what they really mean, whereas in a more hectic context that thought might have been misinterpreted or inadvertently passed over.

This is an aspect I’ve found quite disappointing in many of these so-called *walking simulators*; they are extremely lonely, detached experiences. More often than not, the player knows nothing about the character they are playing as, and the game doesn’t give them much importance either. It’s a huge waste of narrative potential, and one of the secret reasons why so many people despise the genre. Instead, the protagonist is supposed to be the digital world, and the contrived mysteires lying within it, or how pretty it is, or whatever. There’s a reason why even the most fantastical fictional worlds are best portrayed and understood through characters with specific roles and motivations; empathy is a fundamental part of how we understand and percieve value in the world. Lieve Oma is pointedly aware of this.

In Lieve Oma, the player controls a young kid going for a walk with their grandma. The world is of bright orange and pink tones; it’s autnum, and they want to pick up some mushrooms. Grandma walks slowly and sticks to the path, the player can walk or run and stray off on their own. Not too much however, as the level is fairly limited. In this stylized forest, the colors are flat and textureless, an art style that manages to be both striking and calming to look at. The ground is mostly of a desaturated pink colour, and straying off too much the player will find invisible walls with nothing but pink on the other side. These peculiarities make the game feel kind of abstract, like one is re-living a distant memory. 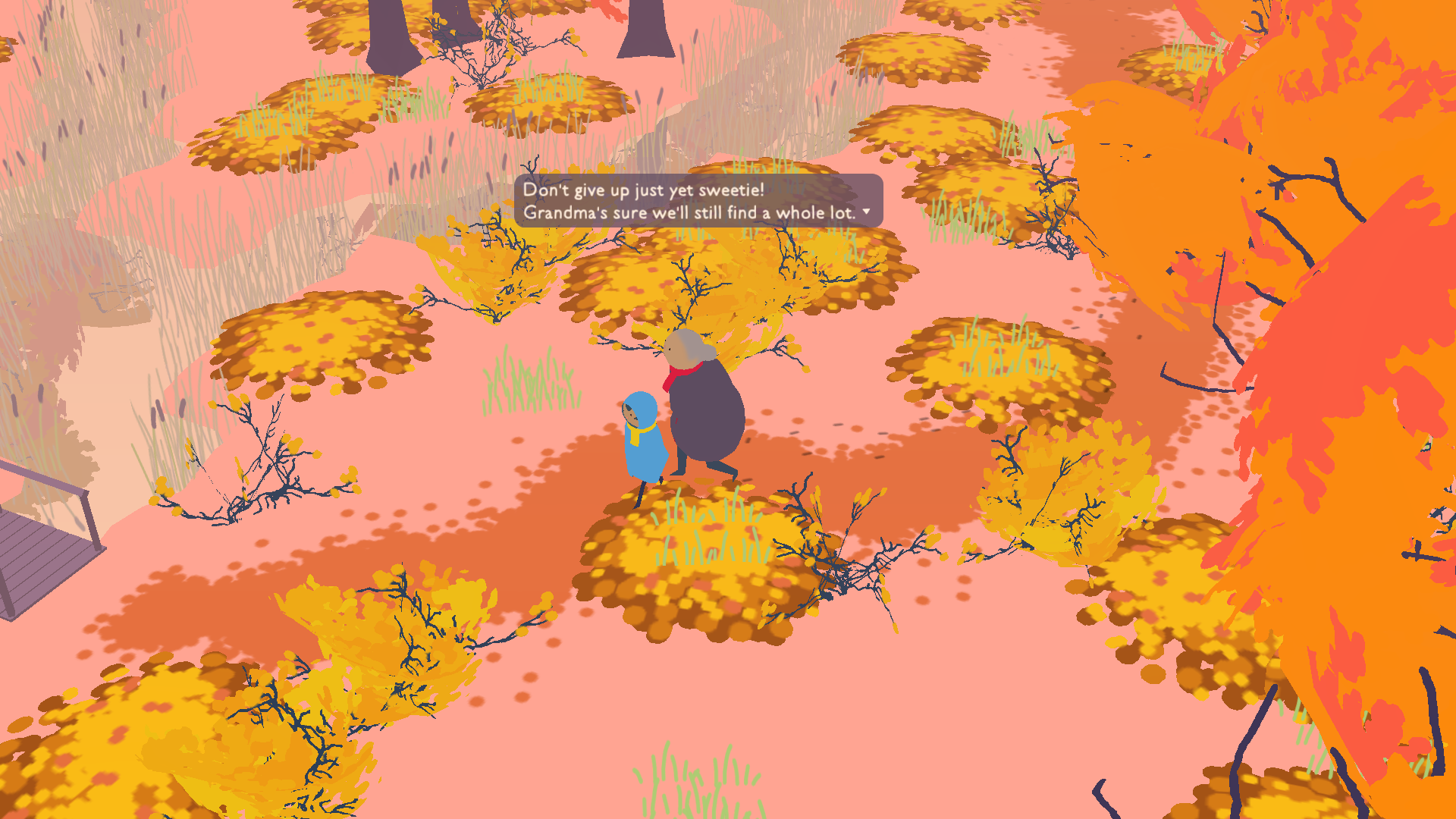 Grandma explains what mushrooms to pick up. As the pair walk through the forest, they have little back and forths as the player goes back and forth picking up mushrooms. There is a certain roleplay aspect to the walking; the player can choose to stick to their grandma and walk at her pace, or run out in front, or stick around behind her. If the player goes too far away, grandma will wait for them. They can explore every nook and cranny and wipe the forest of mushrooms, or ignore them altogether. Going to pick up mushrooms is never about the mushrooms anyway.

The isometric perspective is rather appealing. The mushrooms are fairly easy to spot, what with the blinky sparks glowing out of them, but the twists and turns of the forest mean trees in the foreground will often obscure part of the screen. To find every mushroom, the player will have to turn the camera as they make a turn, looking back behind trees. Both the perspective and the movement are close enough to the perspective and movement of looking for something on the ground in real life, which shows a nice attention to detail. 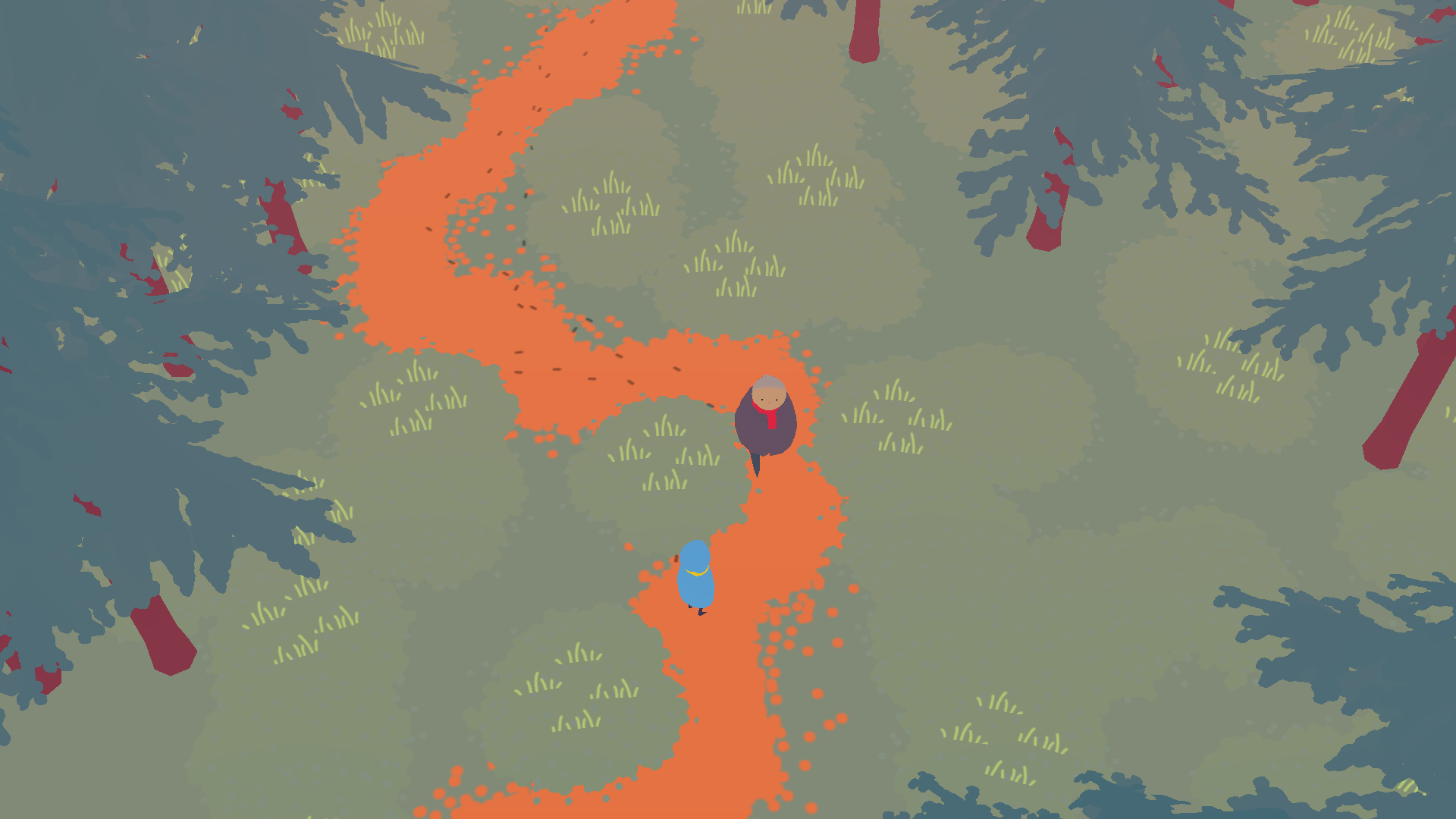 That, however, doesn’t translate to all areas of the game. The audio is particularly disappointing. The piano soundtrack is appropriately soft and moody, but apart from that, only a few birds, very distant wind and stale footstep sounds accompany the player on this journey. This is a huge shame, because I feel like an engrossing, deep soundscape would have contrasted well with the minimalist aesthetic.

Admittedly, both by the short length and quiet ambition of this project, one can tell it came to life on a tight budget. For the most part, it works well with what it has.

The Best Escort Mission Ever