The Cold War going hot would have reduced the world to so much irradiated ash in about three days or so, and we're extremely happy that it didn't happen. However, it left a lot people who are interested in military history fighting over various questions of existential importance, such as "how would the T-72 perform with Soviet crews instead of Iraqis". We shall never know how the hardware and tactics would have matched up in a real confrontation of West vs. East, but we still have some plucky developers giving us a Cold War RTS game from time to time. Wargame series lets you push around tanks and infantry instead stacks of counters, and Red Dragon introduces Asian countries and even brings ships for some of that arcade Harpoon action.

Unlike the other famous Cold War game World in Conflict, Wargame has neither characters nor overarching plot. Following the series tradition, it presents several "what if" scenarios of the war heating up, this time in Asia. Korean war rematches? We've got them. Paranoid Red Chinese attack on USSR? It's all here. Brits clashing with Chicoms over Hong Kong? USSR invading Japan? You betcha! None of these campaign scenarios escalate to nuclear exchanges, so you can claim that they're unrealistic, but their video intros include enough archive footage to tuck you in snugly into this alt history run. Beware, though: the game will be really unhappy if you reach anything less than a major victory, so even a minor one will leave an ashen taste in your mouth. At least it's not radioactive. 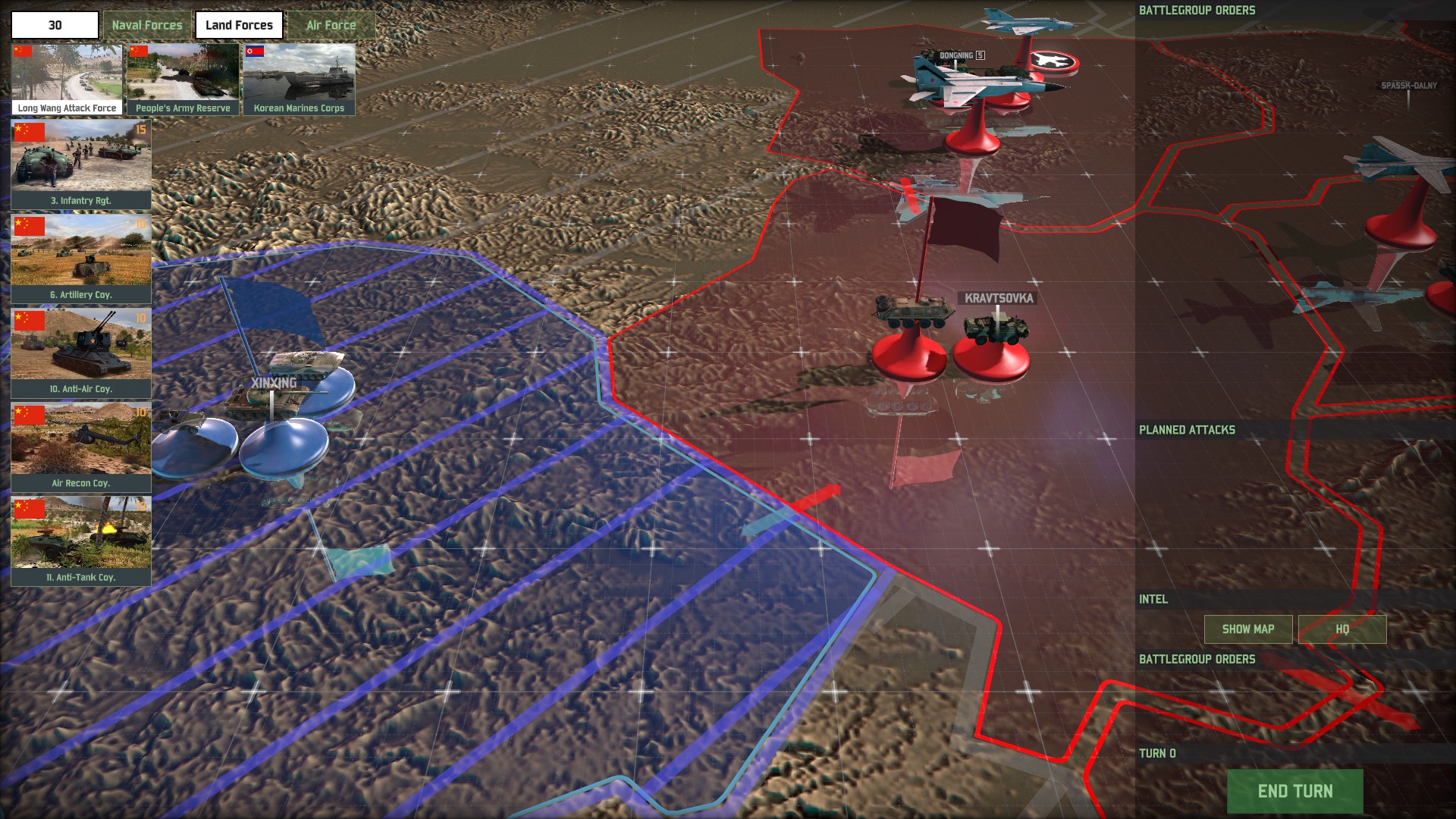 The ol' "you are always exhausted and unusable the start of the campaign, teehe" is one of the Red Dragon's nastiest tricks.

It's a time honored tradition for reviewers to call this sort of campaign map "Risk-like", and I won't break from it. The tiles can have restricted access to their neighbors, host port and airport facilities, and also generate points needed to reinforce or deploy formations. Formations are smaller ("more modular" to have the devs say it) and more specialized than those in ALB, to the point where you might need to keep an eye on a logistics company. They can also be as small as a tank company, because the game hates you. Yes, as far as I have noticed, the campaign is hard, with the enemy always enjoying either a technological superiority (China vs. USSR scenario) or a numerical advantage (USSR vs. Japan). You hardly ever feel like you have the upper hand!

In the end, campaign battles devolve down to game mechanic exploitation. You learn, through trial and error, what campaign moves are to be done in what order - this is especially tedious in the openings, since you start with few choices, and then you whittle them down to the right ones. Then you learn to place your forces in a way that ensure victory - one of the opening Japan campaign battles makes you place T-72s in a way that thwarts the unsteady advance of a numerically superior enemy, while also preparing to counter tanks that will inevitably flank you over the top of the mountain (I don't even need to say that it would in no way possible in a more realistic game). Eventually, rote memorization wins - while Red Dragon's AI supposedly no longer knows your every move (it didn't even need recon units in ALB), it still has several old quirks, like massing all the forces on the point of deployment zone closest to yours. Meanwhile, you start feeling odd while conducting battle after battle with combinations of forces that would never fly in real life. Destroying crack enemy tank detachment with force of attack helicopters (and resupply base that got airdropped or something)? That's an opening move in Japan! 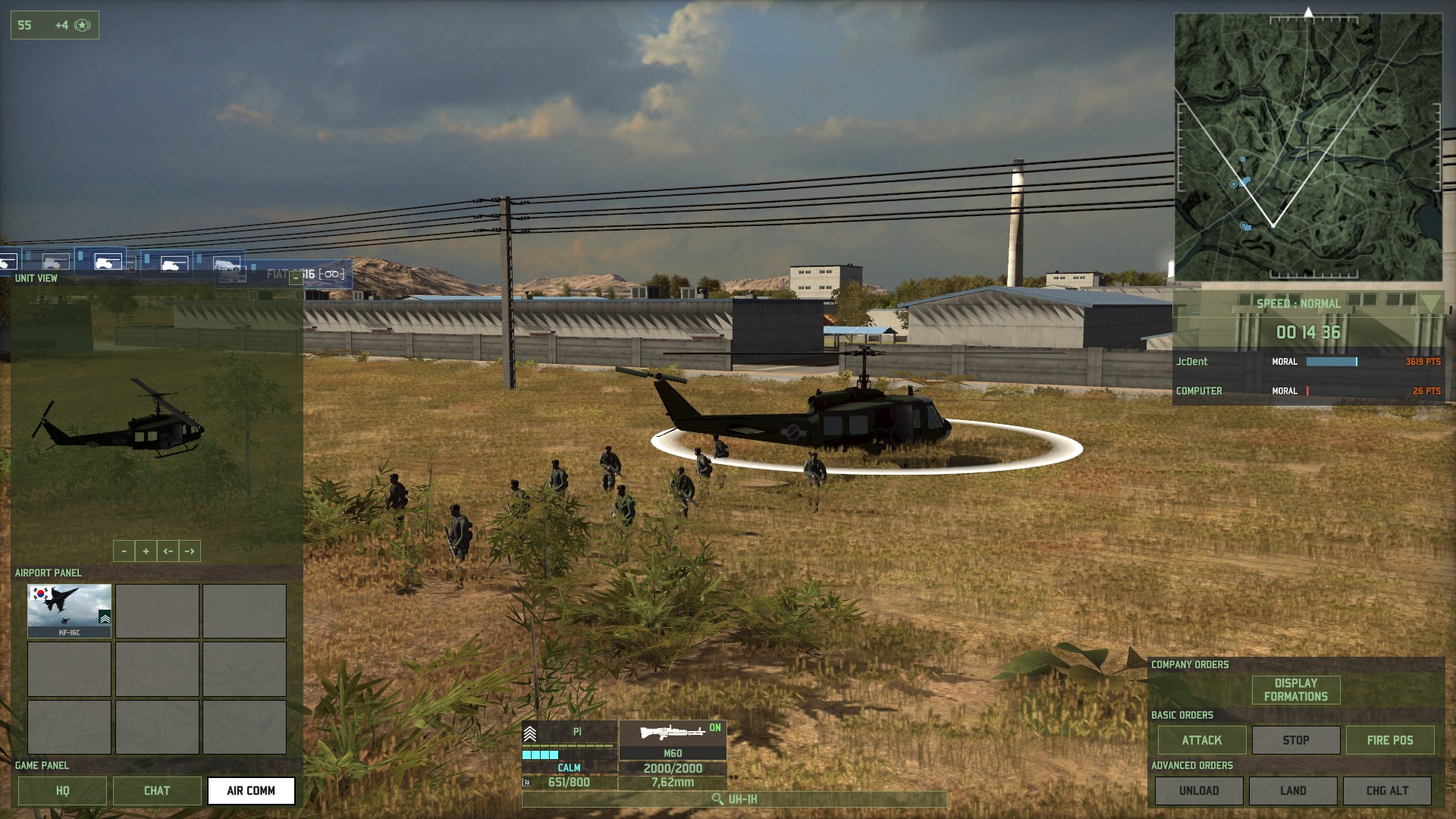 Meanwhile, attack forces composed entire of helicopter-borne infantry have a hard time doing anything but early land grabs and sneak attacks behind the enemy lines.

The AI gets better and the game goes smoother in skirmish and multiplayer battles, which is where people will spend half of their time in the game (the rest is shared between ogling tanks in Arsenal/deck building mode, and being racist on main menu chat). Wargame has no base building, and you bring units forth by spending points (generated by holding areas of the map or what have you) to take buy units from your pre-build deck. And there's a limited supply of those troops, too! You will have to keep all your wits about you on the battlefield. Recon will be vital for sussing out enemy locations and venues of attack, artillery will both pound stationary infantry and provide the only smoke in game, and tanks will be the kings of the battlefield, either bumrushing the enemy in waves of cheap armor or being invincible mid 90s leviathans that laugh at T-72s and take ATGMs head-on. There are also helicopters, planes (SEAD included!) and awesome flametanks. Red Dragon introduced naval combat into the game, but it can be totally avoided depending on the map.

It's the variety that stands at the heart of the game. A player can cherry pick units from either BLUFOR (big NATO countries and Scandinavian nations now joined by Japan, Korea and Australia) or REDFOR (WARPAC countries and Red Dragon's Best Korea and PRC), or narrow the selection down to get certain benefits. Limiting your selection to a country or alliance gives you access to units than only belong to those countries and prototypes (and hilarious things like Panzerfaust-totting Czech militia in Hanomags), restricting the era lets you take more of the older stuff, and going for a specialized formation (like armor, motorized, marine, etc) lets you take more of a certain branch of units while limiting access to others. Unfortunately, minor nations are quite bad at this specialization game, especially since they lack good tanks and helicopters. Hell, sometimes you can't even use up all the selection points you're allowed for a deck. And you have to be careful not to rely on rare and expensive units - sure, a Challenger I might be basically immune to 3-ton aerial bombs, but you might only be able to call in 4 during a battle and they cost a king's ransom in points. 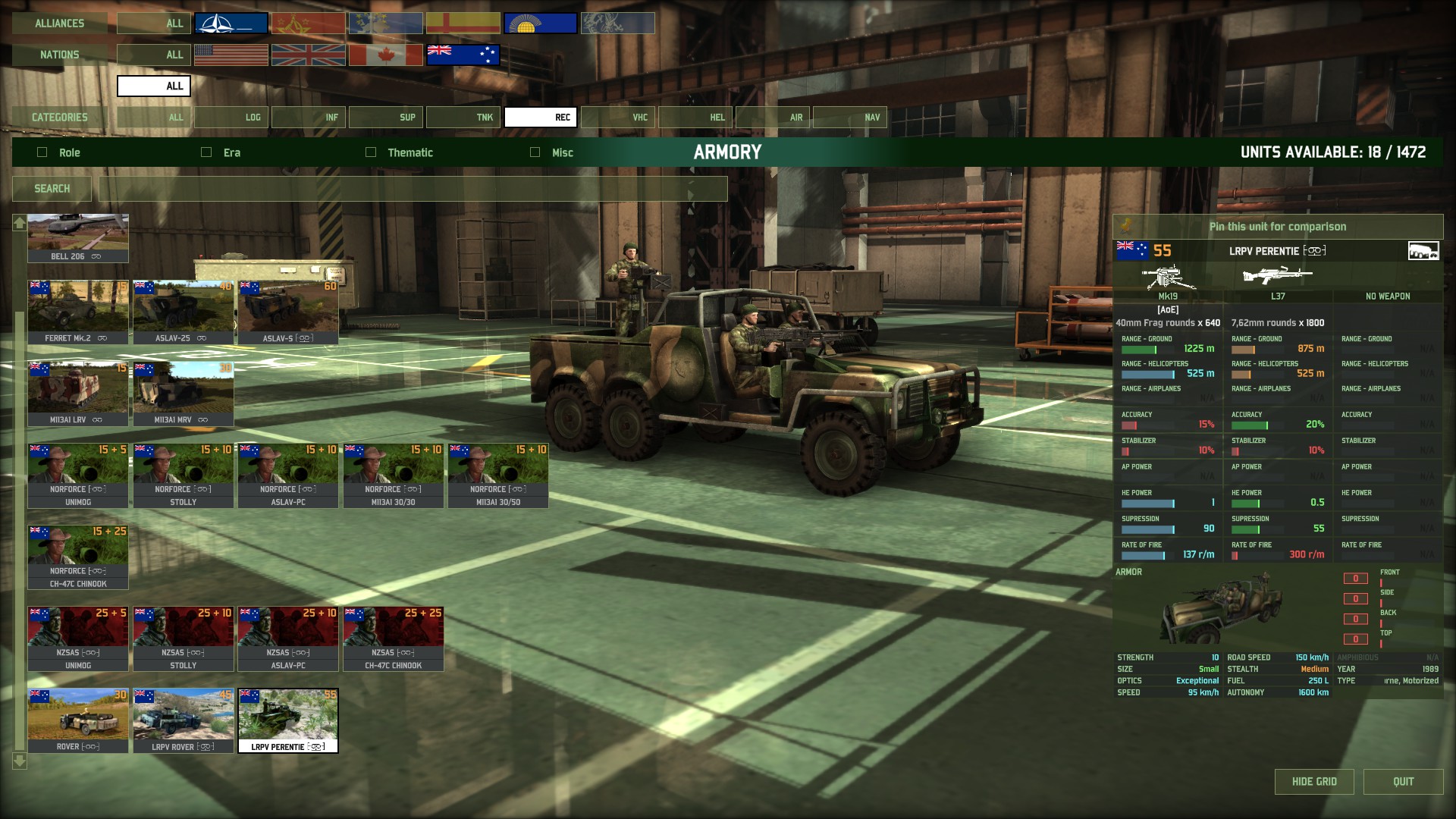 Recon units, no matter how cool or LRDG inspired they are, will spend most of the match guarding shrubs of tactical importance.

As for the new naval combat, well, it's a knife fight in a phonebooth, only with Exocets and corvettes. Any serious fans of modern naval engagements will be without a doubt saddened that anti-ship missile ranges have been cut-down to mere kilometers and that naval aviation is almost a no-show. The trick is to launch the biggest wave of ASM simultaneously to get through the enemy close-in weapon systems that will BRRRT your attacks down. Sometimes, you might even be forced to engage in gun duels! *Harpoon fan in the audience faints* Navies can be easily ignored in skirmish (as basically all maps have non-naval versions) or, when engaged in campaign, be used to troll land forces in a landing scenario. Just park that Oliver Hazard Perry close to the shore and you won't need tanks!

All in all, Wargame is a fast and stressful game that requires some degree of micro management, and for that reason it is far too pretty for its own gameplay. The game might not be as visually impressive as Company of Heroes 2 (that's the only good thing I can say about that...filth), but it's serviceable when you're slobbering over five versions of T-72 displayed in the arsenal. However, once in battle, you don't have the time to watch your tanks and infantry up close – you're orchestrating the movements of multiple platoons of tanks and infantry, worrying about supply and sending pilots to their deaths! It basically turns into a hex and chit game, as you follow your units from the birds eye view, noticing only their unit counters. Sure, there are lovely details like ships exploding with shockwaves radiating outwards, and fighter jets have wonderful fiery deaths, but the rest goes unnoticed and unseen. Maybe it's for the best, because infantry in the game is super static, always marching and fighting arrayed in an obvious circle, each soldier acting as a visual representation of his squad's hit point (at a 1:1 hitpoint/dude ratio). It's a little sad, especially since Company of Heroes had shown us, long ago, how dynamic and immersive infantrymen can be, but like I said, you can't spare the attention to take it all in. The sound part of the game is mostly serviceable, though a strange design decision gave all unit categories the same barks across all nations, just translated into different languages. Bizarre! 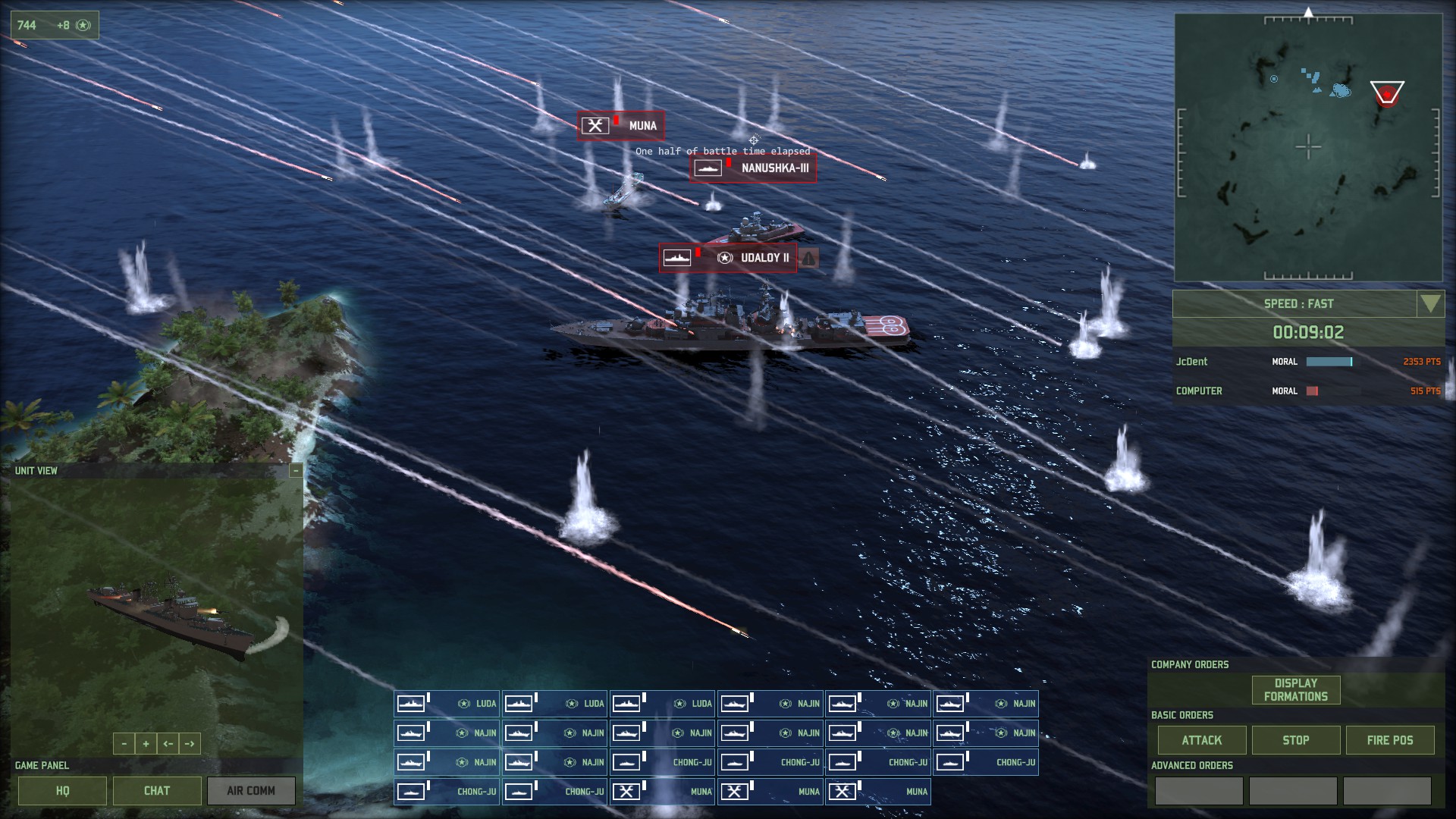 Pretty as they may be, MLRS attacks don't impress Udaloy II-class destroyers!

In the end, Wargame: Red Dragon is a worthy addition to the series, and a great choice for people who want their Cold War action delivered in a package that has more visual fidelity and ease of access than, say, winSPMBT. The expanded unit roster pleases everyone except for the people who protest North Korea getting T-90S while the USSR doesn't. Naval battles are an interesting and beautiful if a little straightforward addition to the game that might be expanded further, provided the series doesn't Wargame 2: Major Reshuffling. Now, what the game really lacks is a level editor and modding tools. We would have had all the units fixes and historical TO&A's in two days, and a Warhammer mod in three!