As a longtime fan of the Hitman games, my heart sunk when I heard that the latest entry in the series was to be episodic in nature.  Surely there had to be something seriously amiss to warrant modifying the game's release model.  Yet Hitman: Episode 1 was surprisingly entertaining,  easily eclipsing the somewhat mediocre Hitman: Absolution.  And now Square Enix have proven that Episode 1's success was no fluke, with a follow-up  that delivers in spades the same stealthy shenanigans that the Hitman games are famous for.

As balding assassin Agent 47, you've been charged with infiltrating a small Italian coastal resort and eliminating a pair of unsuspecting targets.  What initially struck me about Episode 2 was the sheer breathtaking beauty of the episode's setting -  so taken was I by the game's locale I that I immediately jumped on Google to see if the town of Sapienza was real. I sadly determined that this was not the case,  which instantly put the brakes on my holiday plans. I nevertheless spent a good ten minutes roaming the town's streets, marvelling at how expansive the level's environs were. 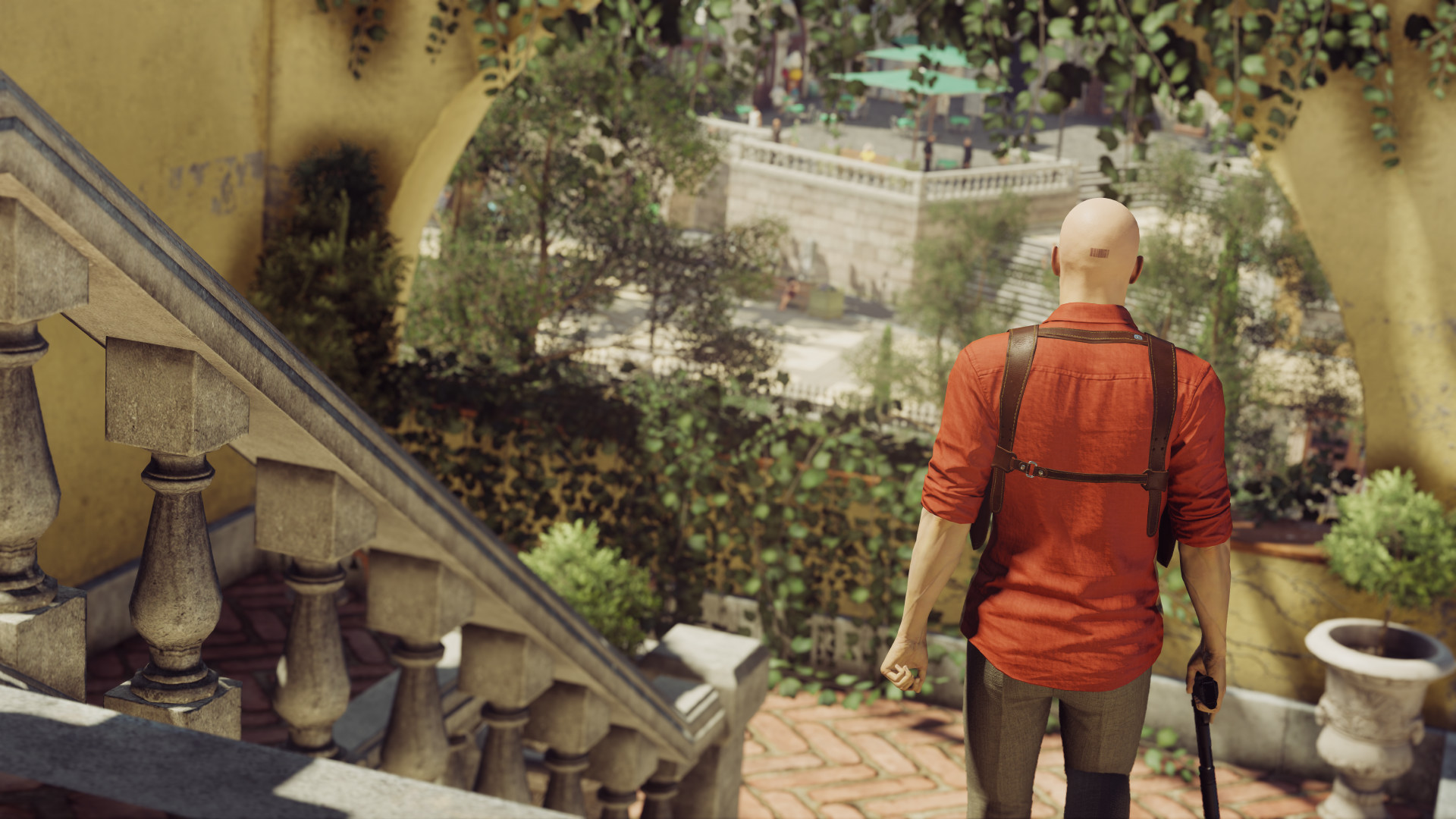 Then I remembered I was there to murder people and that gawping at the scenery wouldn't necessarily advance my mission.  True,  Sapienza may not rival totally open world games such as Grand Theft Auto in terms of sheer scope but it is by far the largest location the Hitman series has boasted to date.  Your primary targets are both sequestered within a mansion in the centre of town but there are countless different ways of eliminating them, some of which don't require you to even set foot inside their domicile.

While Hitman does by default highlight some of these assassination opportunities, I'd strongly advise that you turn this feature off. I gained a real sense of satisfaction from discovering new opportunities and potential vantage points from which to dispatch my foes.  Take the game's ice-cream shop, a location which I'd initially dismissed as being mere background colour.  I found myself grinning like an idiot when I realised I could use it to access an upstairs office building which in turn gave me an excellent view of the mansion's grounds.

Stealth is, as you might expect,  the order of the day, though matters are complicated by the town's active populace. Sapienza contains plenty of side-streets which can be used to conceal your dirty-deeds although they are fairly frequently travelled so that you need to move quickly in order to remain undiscovered.   During the course of one playthough, I decided I was going to waylay a character in order to disguise myself as him and ended up frantically bundling his stunned body into a bin, like some deranged street-cleaner.  Granted, it took me a couple of goes before I accomplished this task unseen but I never found failure to be a source of frustration, nor did it ever feel unfair. 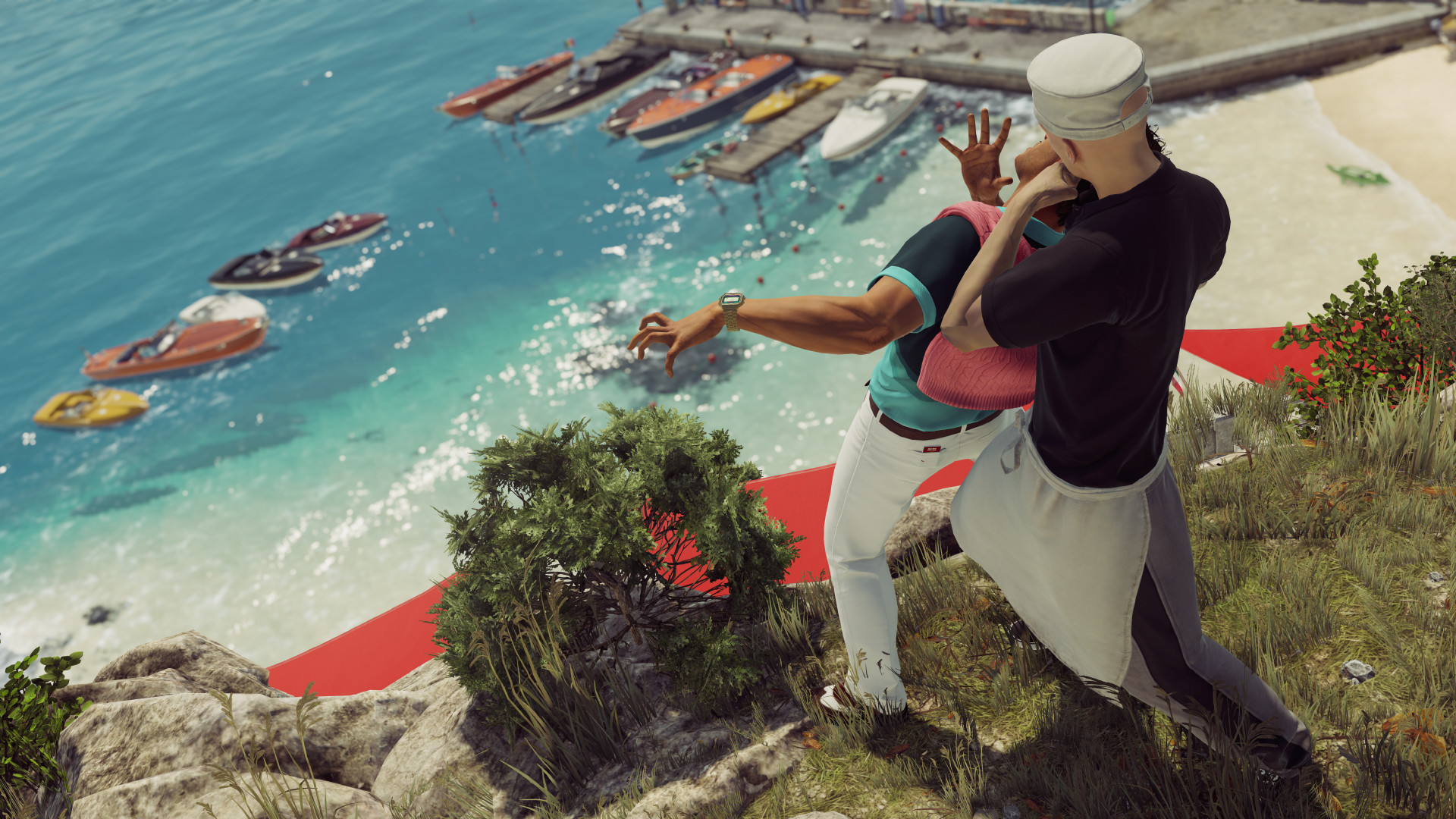 The open streets of Sapienza also mean that should you attempt to engage in serious gunplay you'll likely find yourself outflanked by the AI guards,  who are surprisingly canny.  Progressive playthroughs do unlock additional weapons but even they don't guarantee you'll survive a firefight.   Given that the game offers so many opportunities to dispatch your targets without being seen,  persistence is typically rewarded with success.  I found this to be a welcome change from Hitman: Absolution where you could typically mow down your foes without any real issue, due largely to the linear nature of that game's levels.

Sapienza is ,by contrast,  a veritable murder sandbox.  I have to date played the episode through four times,  adopting a different approach each time.   The first time I tackled my assignment, I used an exploding golf ball to hurl one of my targets into the air,  which amused me perhaps a little too much.  I proceeded to adopt various guises as I pursued my targets through subsequent playthroughs, though I never managed to find a practical use for the game's somewhat sinister plague doctor costume.  That didn't stop me roaming around the town square wearing it though.

It seems as if Hitman's designers have thought of everything, the vast majority of objects in the game having one or more uses, even if their purpose isn't immediately obvious.  I was a bit puzzled as to why, wrench in hand, the game allowed me to drain scooters of their oil. I initially expected people to slip and slide, cartoon style, on the leaking fluid. It wasn't until later that I discovered that a well placed bullet would cause said scooter to detonate, which in turn led to all sorts of homicidal hilarity. 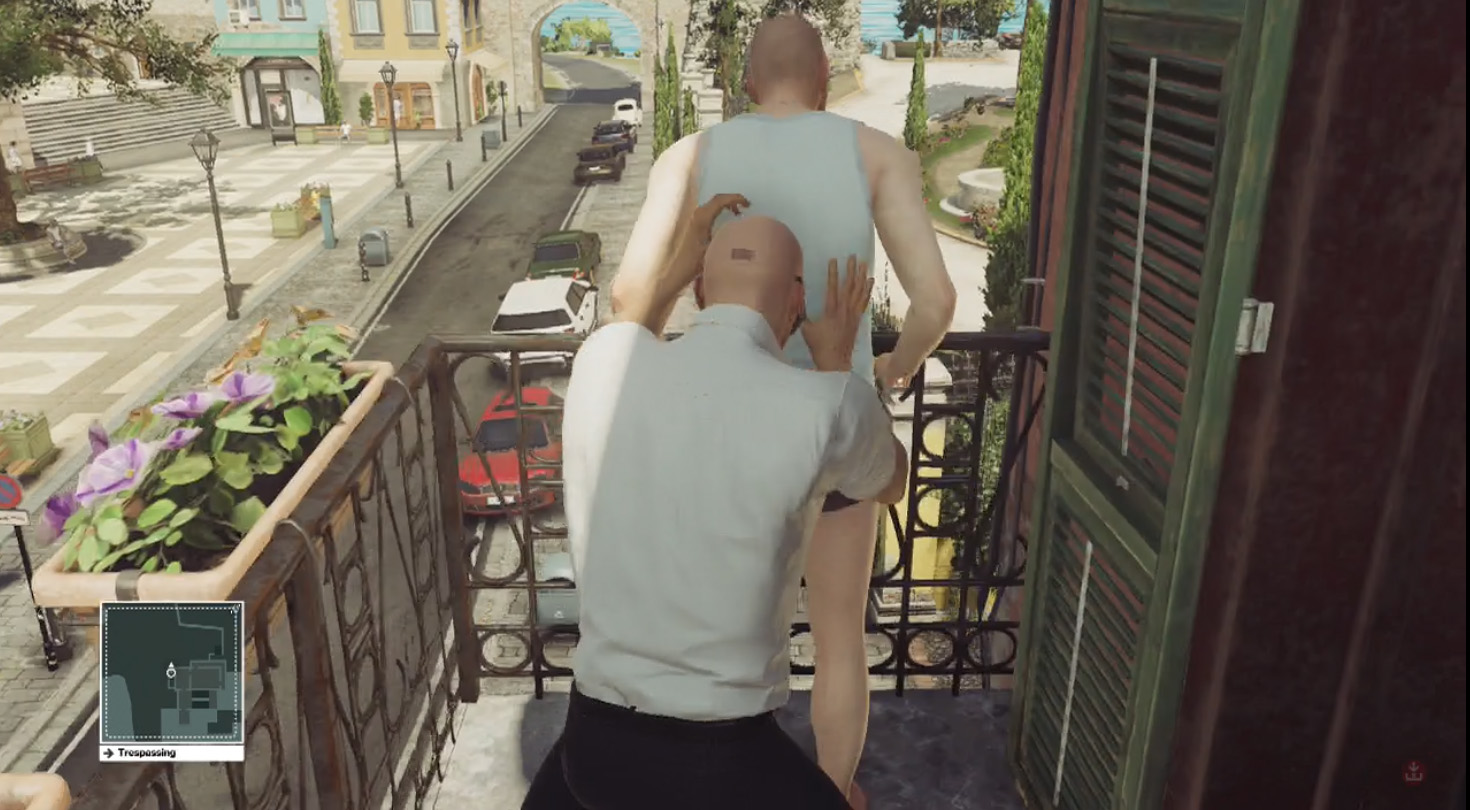 Hitman Episode 2: Sapienza does have one notable flaw, however, which relates to the level's third target.  You can spend as much time as you like switching disguises, scrambling over rooftops and arranging 'accidents'  but in order to complete your third objective you have to venture underground. Your final target is not a person but a place – a secret lab where a dangerous virus is being developed. You're tasked with destroying this virus, a reasonable request given its potential lethality, even if it's not 47's usual fare.

The problem is that there's only really one way to approach the lab, and a very limited number of ways to gain entry to the room where the virus is kept. Furthermore, many of the NPCs have white spots above their heads, meaning that they will see through your disguise.  This area, and the lack of choices presented by it, gave me flashbacks to the bad old days of Hitman: Absolution with its small and frequently boxy levels. It means that no matter how creative you are in dispatching your human targets, you'll have to tackle this relatively uninteresting area before completing the level.

Nevertheless, it's a testament to the strength of Episode 2 as a whole that this wasn't enough to put me off the game.  It's also true that the user created 'contracts' you can play online don't require you to complete this area,  though I'll be spending a good few hours replaying the level  yet again  before even tackling any of the contracts. Episode 2 is also more reasonably priced than I initially feared it would. I found  Sapienza's £7.99 price tag to be entirely reasonable given how much time I've spent  playing it. 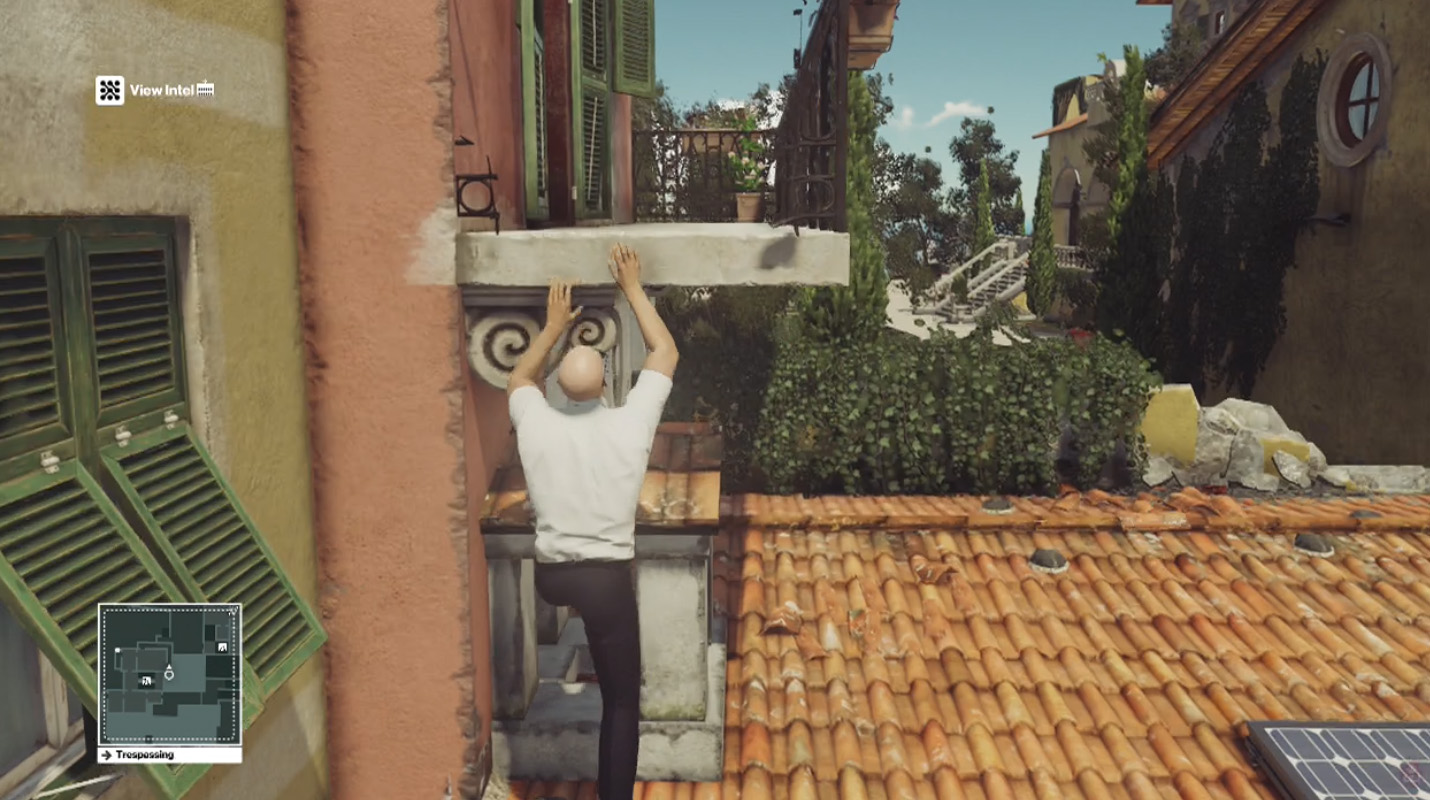 For me, Hitman Episode 2: Sapienza represents the zenith of the Hitman series thus far. High praise that may be, but the openness of the levels and the sheer freedom the game offers makes for a superb stealth-based experience.  If IO Interactive can maintain or even surpass this level of excellence then Hitman's remaining episodes should be well worth waiting for.