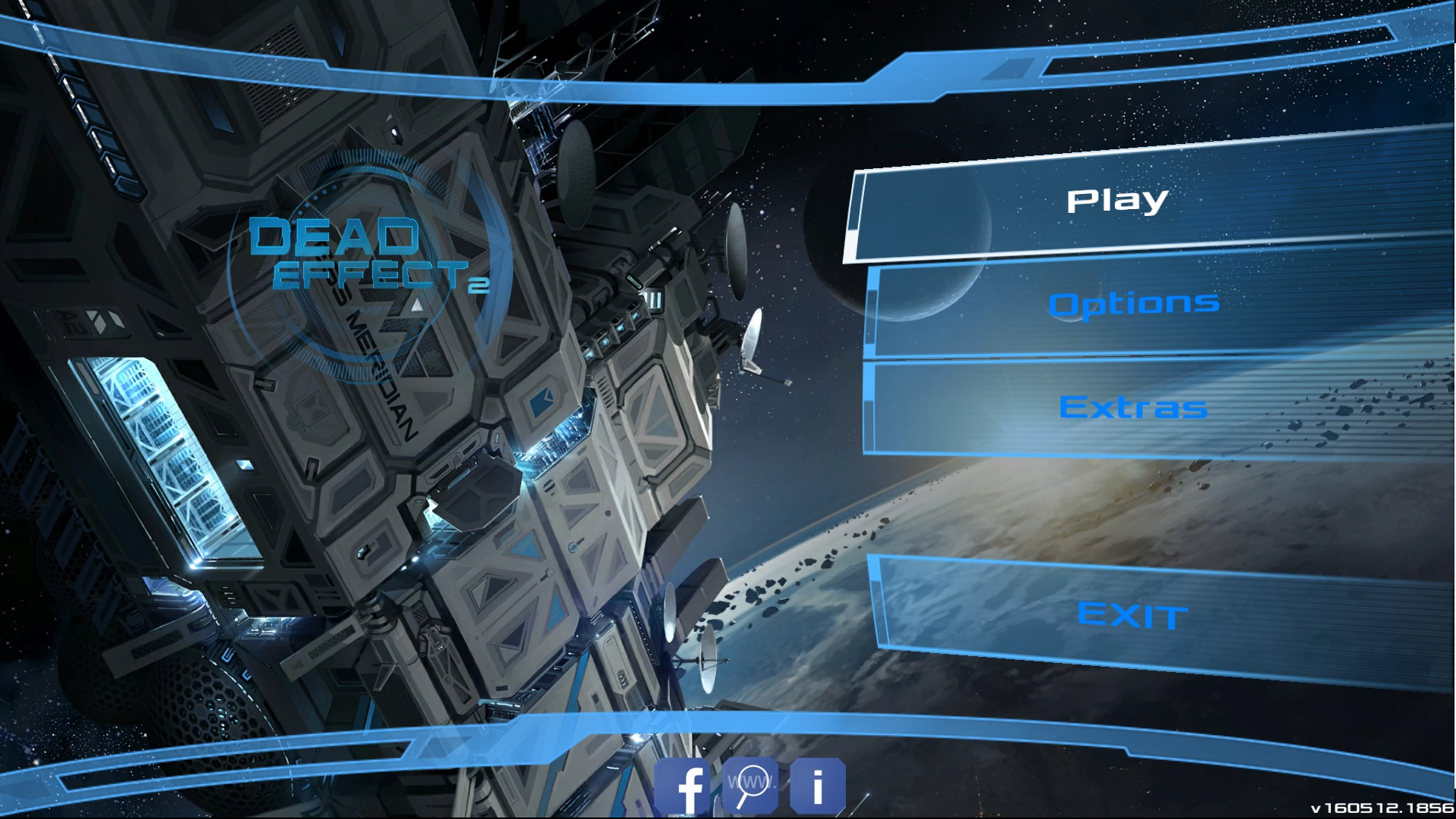 Dead Effect 2 is a first-person shooter that mixes the sci-fi and horror genres as you, a highly trained soldier, fight to take control of a massive colony ship traveling through space. Enemy soldiers are not your only worry as you must also deal with legions of undead clones colloquially referred to as “Zombies”. Dead Effect 2 was initially developed as a mobile game for Android and iOS by BadFly Interactive, a company based out of the Czech Republic. As of May 6th it was released to PC and will soon be ported to Xbox and PS4. 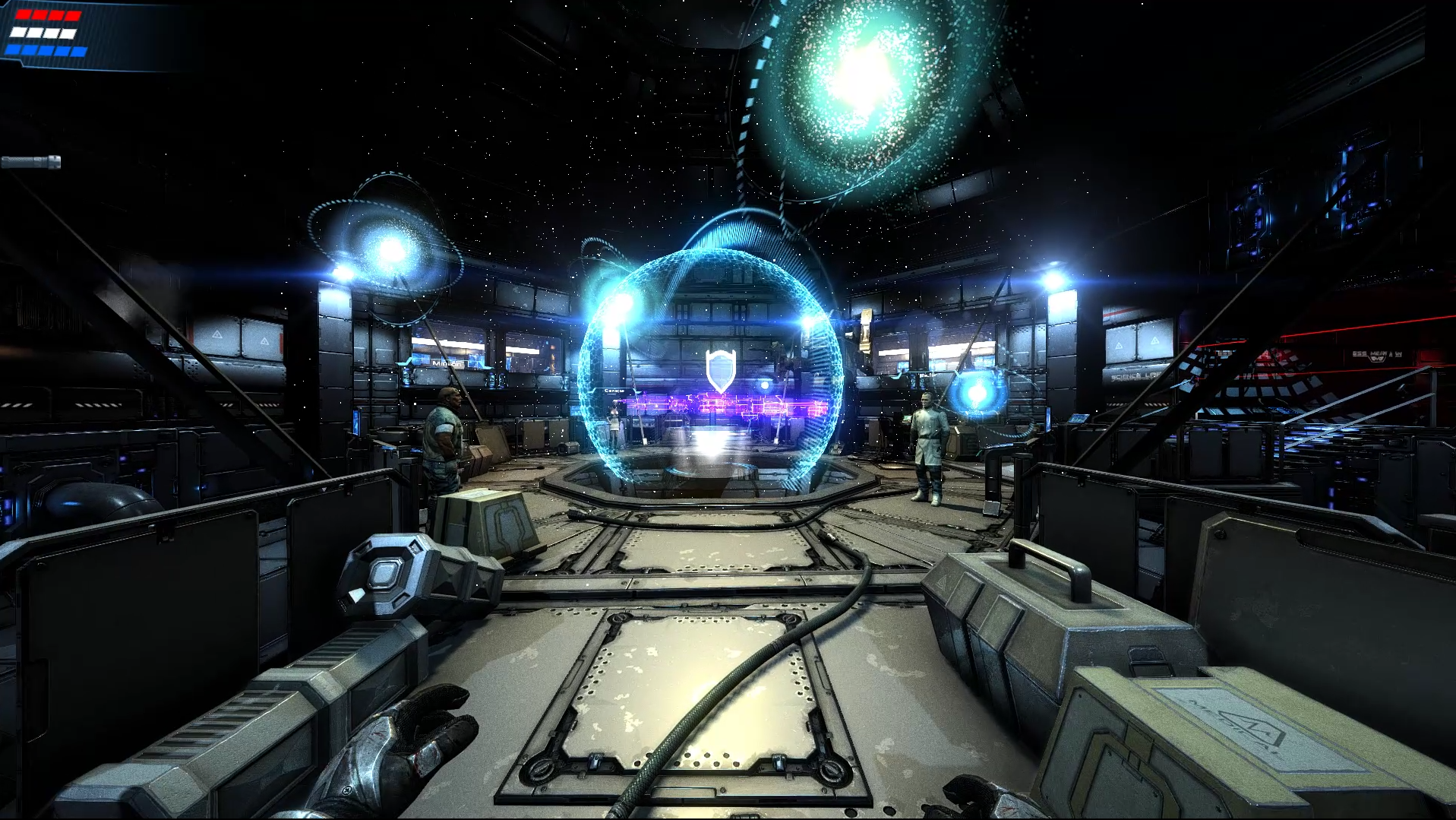 The main game is broken up into missions that you can access via the central hub area that serves as the base of operations for your rebellion effort. From here you can upgrade your characters abilities with the help of Danette, an enhanced human much like yourself, as well as buy, sell, and upgrade guns, gear, and implants from Minikin and Bielek, once you have progressed far enough in the storyline to unlock them. If you are looking to “Expand your mental capacity” as Danette calls it, there is a wide variety of abilities that allow you to hold enemies in place, slow time, cast lightning bolt… and many more. If you fancy fantastic firepower, Minikin can sell you guns that excel in turning your enemies to chunky salsa. And if you need some pep in your step, for perhaps just an entirely new leg, talk to Bielek and a short operation later you will have a shiny new cybernetic implant allowing you to run faster, jump higher…well if you could jump that is (You really can’t, kinda weird…). When you are feeling ready to combat the armies of the dead, simple move to the middle of the room and interact with the large holographic display of the colony ship to enter into the mission select screen. 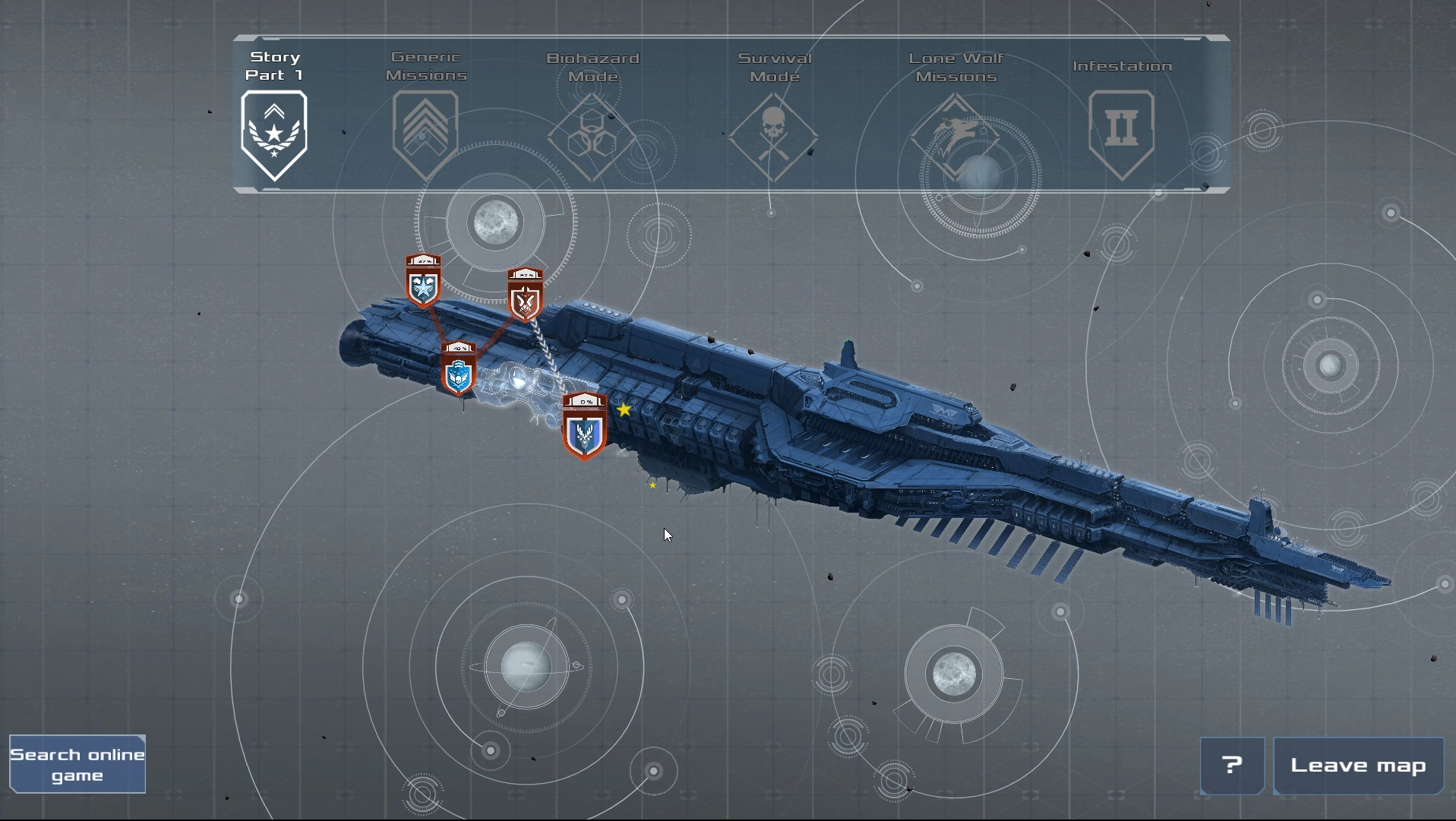 There are several game modes available to the player, namely Story Mode, Generic Mission, Bio Hazard, Survival, Lone Wolf, and Infestation most of which can be played in Co-op Mode online with up to three other players. Story mode progresses through the main storyline and moves the character’s own plot lines forward. Generic Missions are indeed quite generic, usually involving fetching a ____ from the ______ so we can _____. Bio Hazard is a wave defense style game mode where you hold out against progressively difficult enemies. Survival tasks you with, well, surviving, for a set amount of time until help arrives to rescue you. In Lone Wolf mode you fight against the enemy soldiers controlling the ship and must complete objectives to usurp their dominion. Finally, Infestation mode has you clear out a section of the ship of zombies, ending with a final boss fight.

Overall each of these game modes on their own are pretty fun, but things change after you play it for a while. Initially, you can continue progressing though the storyline without much issue, but soon the recommended level to play each successive level starts outpacing your progression from story missions alone. In essence you are forced to play the other game modes whether you like it or not because eventually you cannot keep up with the enemies who can demolish you while taking very little damage from your under leveled peashooter. To make things worse, the guns have an accuracy rating which means there is an element of RNG to your ability to hit what you are aiming at and makes it feel like aiming doesn’t matter. Aiming down the sights does improve this, but while playing I would still notice bullets flying wildly away from where I was aiming even at close range. If you can manage to get a gun that has enough damage to deal with the enemies you may still have a tough time managing health. There are two methods of healing in Dead Effect 2 and those are sparsely spaced Medistations (that you can totally get attacked within) and consumable health packs. The latter is usually the most reliable source of healing, but to get them you have to buy them with the in-game currency outside of a mission as they are quite rare as a drop from killing enemies in game. 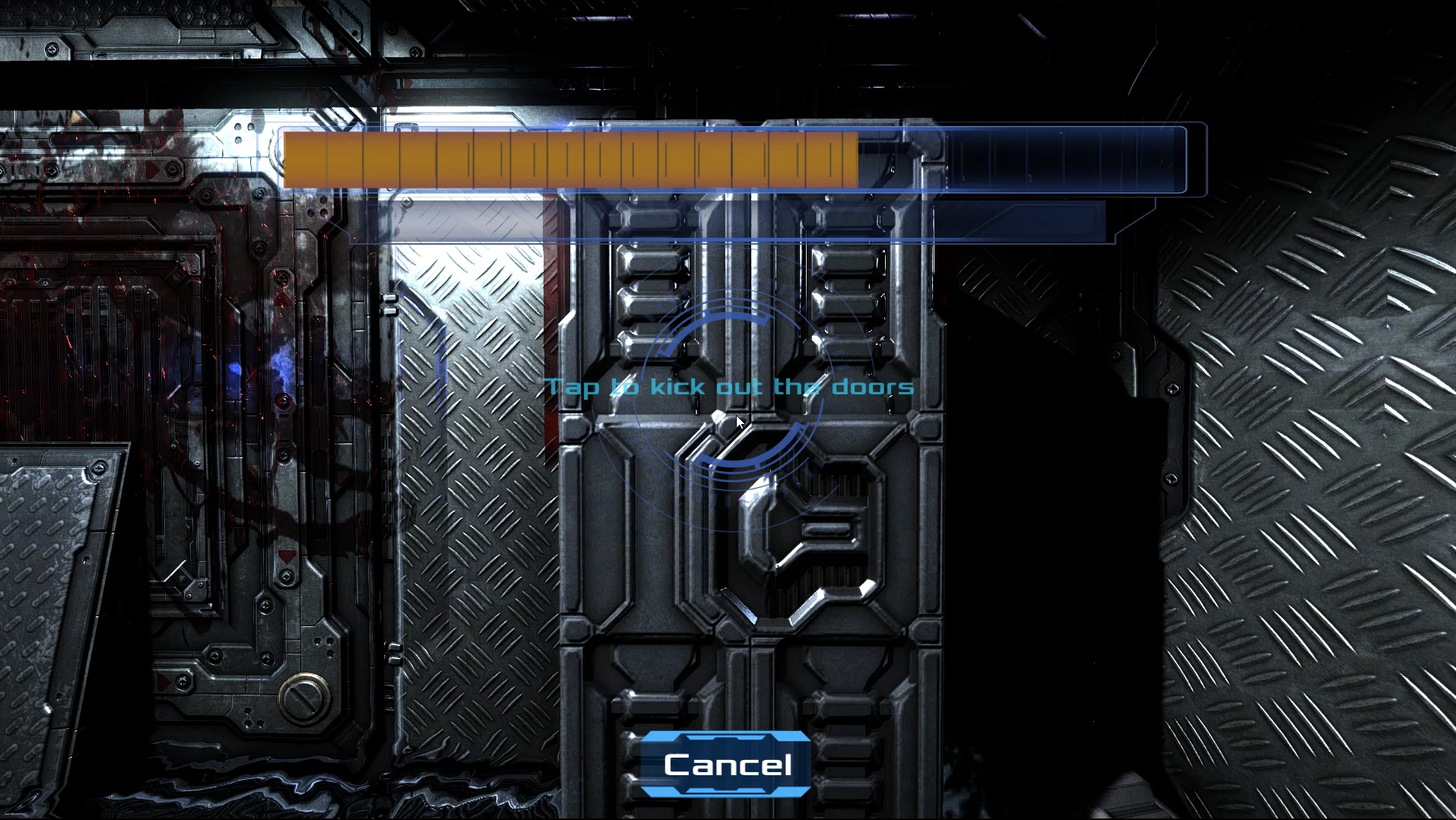 This is but one of many examples of where the mobile ancestry of the game starts to show through the shiny updated-graphics veneer of the PC port. One of the tooltips tells you to buy an XP booster to help with leveling, which seems completely unnecessary. Many doors in the game require “Hacking” which will usually involve some form of mini-game ranging from adding numbers to reach a set total or matching a waveform signal. Though some of these hide the original tap/touch mechanic fairly well, others do not. The waveform game has you click and drag sliders to change the shape of the signal, and another mini-game has you rotate disks to align them in a certain way by clicking and dragging them around. The more on the nose examples of this come into play when you are asked to provide a finger print by clicking the highlighted space on the screen or open jammed doors by “Tapping Repeatedly to Open” (you actually press space a bunch). When it was on mobile this would have been fine, if not fairly fun and immersive. On a PC port, it seems a bit lazy and out of place.

After playing for a while, you will start to notice that the game outside of story mode (and sometimes within to be honest) gets quite repetitive. Enemies groups tend to usually be formed out of 10 + normal zombies, a grenadier zombie that hocks grenades about the room, and a “heavy” zombie that basically serves as the standard bullet sponge of the group. The environments themselves, while very pretty and atmospheric, are reused quite a bit and get stale fast. Combat isn’t exactly enthralling either due to a general sluggishness and awkwardness that really pulls it down. Reloading takes ages (even with upgrades), movement seems kind of slow, throwing grenades is leisurely. Even the bullets don’t feel moving particularly speedily, noticeable with the sniper rifle where you will often miss shots because the bullet is still traveling towards the enemy.

The sounds in Dead Effect 2 are a mixed bag of excellence and cringe worthiness. On the one hand the soundtrack is actually really. I particularly enjoyed the background music for the main hub area that has a medieval-fantasy twinge to the otherwise sci-fi tones. During combat the music aids the feeling of being a bad-ass commando striking down the hordes of zeds by providing a consistent upbeat tempo with plenty of hard hitting segments to drive it home. The sound effects are each pretty good by themselves, but the problem is that the team didn’t seem to have quite enough of them to keep you from noticing the fact that they repeat. There are exactly two sound effects for moving through water, and even with random chance of playing, you still very much notice the ever repeating swish-swish-swoosh-swoosh-swish-swish-swoosh-swoosh. When you fire the mounted machine gun, something doesn’t sound quite right with it, that is until you realize that although it is constantly ejecting shell casings you only hear one solemn shell hit the ground when you stop firing. They could definitely benefit from a sound pack update to add a few more sound effects. Finally, the voice-acting ranges from “I mean, it works pretty well” to “Maybe they should have done a few more takes”. Danette’s, Minikin’s, and Gunnar’s (Player Character #1) voicings aren’t too bad, and then there is Jane Frey (Player Character #2) who’s character lines are less than stellar. Jane Frey sort of sounds like she was given the lines out of context and asked to perform them based on that, often coming out feeling misplaced.

On face value this game looks really good graphically. There is clearly quite a lot of detail put into the environment and their efforts to make it look like you are traversing the innards of a hulking spaceship. Bundles of cables run along the sleek metallic walls and bright white lights give off that distinctive lens flare that has become synonymous with the sci-fi space setting. The character models are pretty good, though the standard zombies were not shown as much modeling love compared to the NPC’s. The design of the monsters you fight are pretty divers and interesting but there are aspects that seem to borrow, and quite heavily borrow from other games and movies. For instance, the “Brog” enemy looks really similar to Pinky from Doom 3. This odd similarity thing isn’t limited to the characters. At one point in the game zombies are teleported in with the same visual effect as the Terminator in Terminator 2: Judgement Day. Also, the “Hi-Tek” guns seem to draw upon the weapon design of District 9, some of which seem to directly copy over elements of the guns. I would not go as far as to say they are ripping off anything, but there are striking similarities 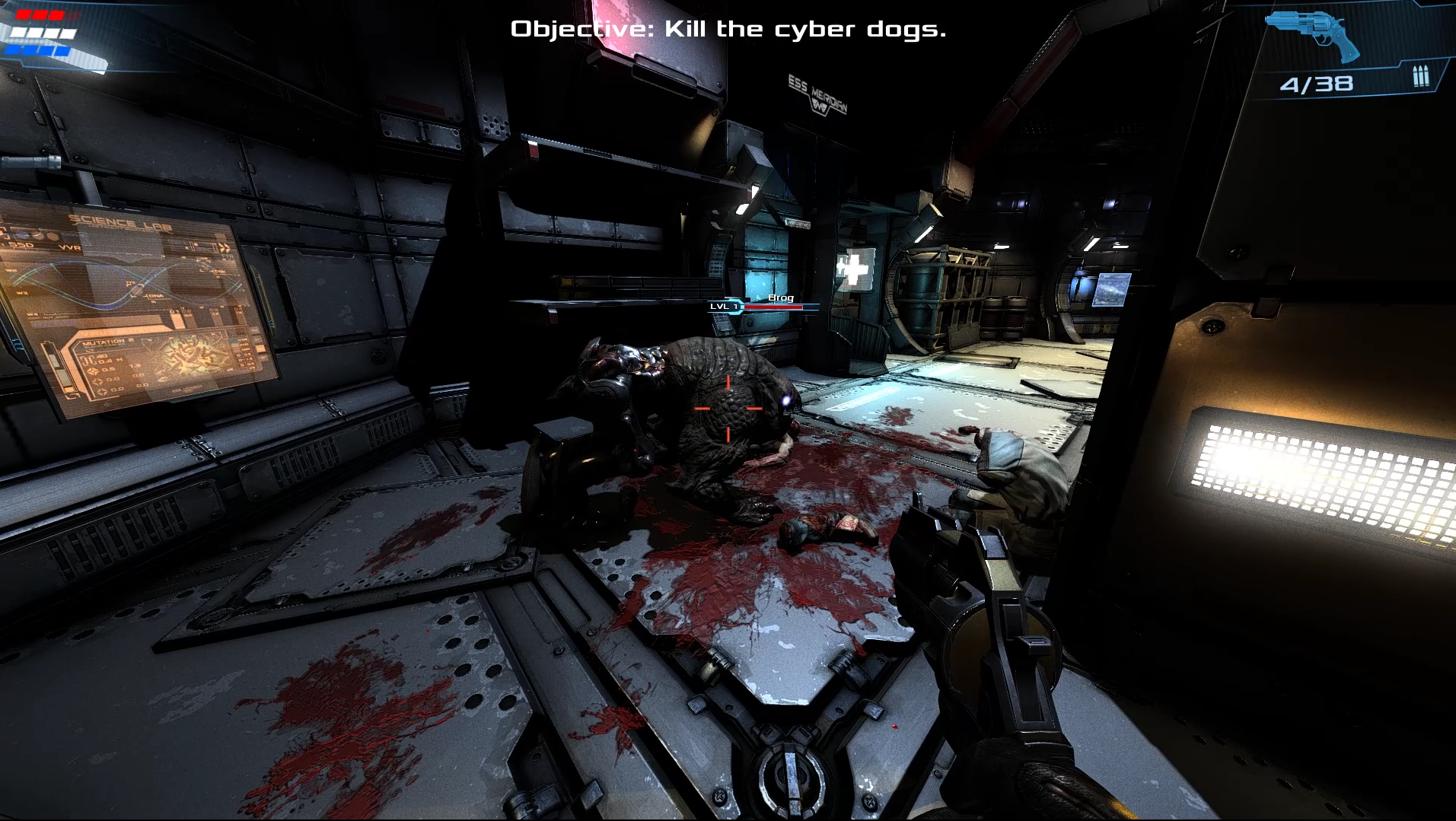 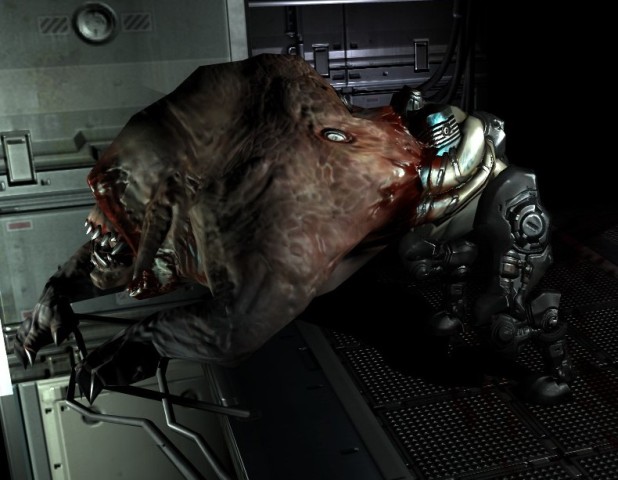 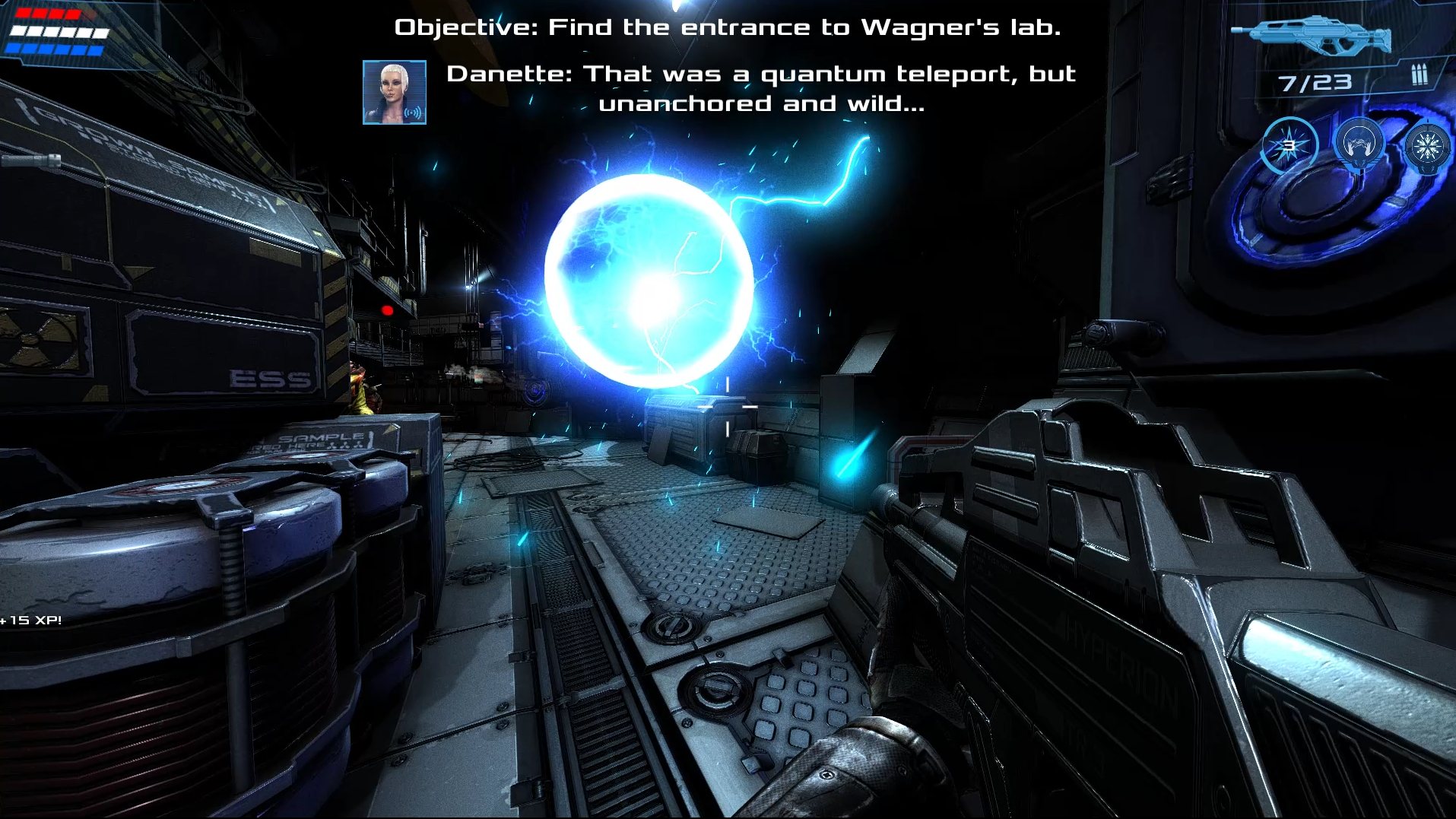 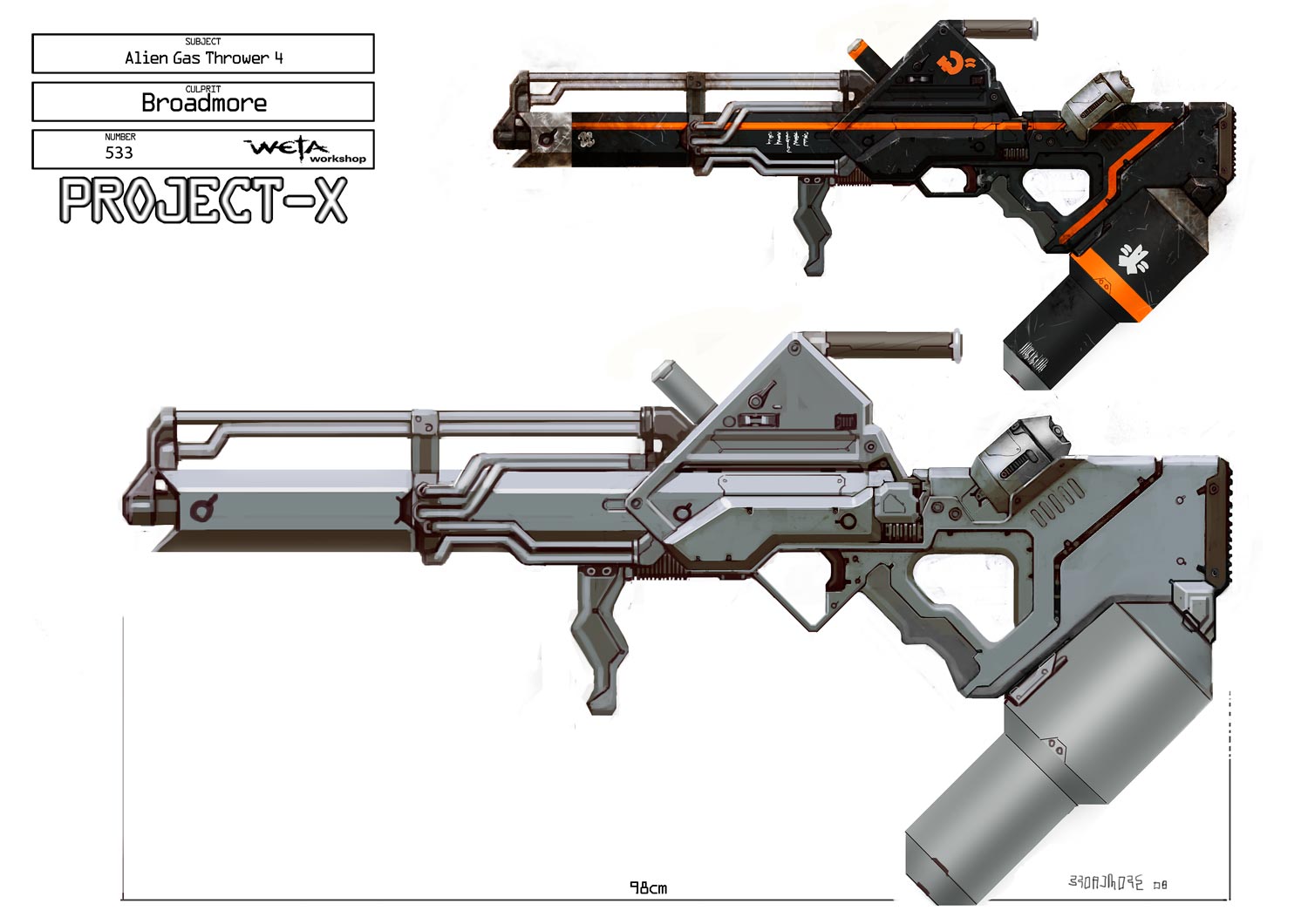 Dead Effect 2 is entertaining and is pretty fun to play, but loses its luster after a while. Mobile ports can tend to fall sort, and sadly this game does indeed fall short of what it could be. If it were perhaps cheaper it wouldn’t be so bad, but for $19.99 I wouldn’t recommend it.