What kept me up at night, that long Japanese night a year ago? Why, those were the visions, the visions of a wonderful 3D printed future. My 3D printed future, to be precise. Way back then, Battlefront, the designers of the most popular WWII miniature game Flames of War, had announced their horribly-named Cold War spin-off, Team Yankee. It felt like the only thing left to do was to 3D model (and 3D print) tanks and APCs, and to thus rob the New Zealanders of their money.

Miniatures aren't cheap. 28mm miniatures (falling somewhere between 1/48 and 1/56 scale) can be prohibitively expensive - and Games Workshop demands you buy and field more and more of them. 15mm are much cheaper, but it's not yet cheap. Battlefront produces an obscene variety of 15mm miniatures - tanks, infantry, little-known artillery tractors, you name it. They also produce some early cold war stuff, like T-55 tanks, used in their Arab-Israeli and Vietnam War spin-offs. Those are some pretty 15mm tanks, but they are also likely the most expensive 1:100 tanks out there. Do you have alternatives? Hell yeah you have alternatives! Unlike Games Workshop with their original content do not steal policies, Battlefront is powerless against other producers of historical miniatures. You can't copyright history (yet)! There's also the fact that many of the other producers of quality 1:100 T-55s might predate Battlefront as a company. Historical miniature manufacturers are a cottage industry, so much so that they would like nothing more than to conduct their business from cottages in the English countryside, reachable only by carrier pigeon or, God forbid, fax. Historical miniature makers (with some exceptions like the Perry brothers) really don't feel the need to keep their websites up to date (even if that date is 2006). Look at Peter Pig's website. Looks horrible? Well, it's a website of one the most august of  it's miles above some other manufacturers that demand you send both your request and money via regular snailmail and partake in other arcane practices.

And to add insult to injury, their goods are rarely that much cheaper, and you're buying a lot of metal cats in a bag, because many websites will not brook pictures of their wares. Would you dare to imply that a gentleman's miniatures could be poorly detailed?! Why else would you want to see what you're buying?

Anyways, it seemed like a good environment that could benefit from 3D printed tanks. After all, Team Yankee stuff was going to be Battlefront expensive, and it's not like the ancients of T-72 building were going to drop prices. Somehow, the fact that I didn't know anything/much about 3D modeling (or printing) didn't deter me. All I could see was a Shapeways account brimming with 1:100 Cold War Soviets models at cut-rate pricing.

Now, 3D modeling isn't that hard to get into. If you're not into piracy, you can easily get Blender 3D. Being open source - and probably the biggest open source 3D modeling platform out there - it has a more tutorials than you can shake a low-polygon stick at. Everyone has made one or two, English skills or impenetrable accents be damned. I may or may not have retained at least some rudimentary understanding from my dalliance with 3ds Max back in school (over 8 years ago, Jesus). Plus, preparing models for 3D printing isn't that hard and it's also covered in several single video tutorials.

But for some ungodly reason I decided to start with a BTR-60, a Soviet APC that would most definitely not appear in the first wave of Team Yankee stuff. It did not go well. 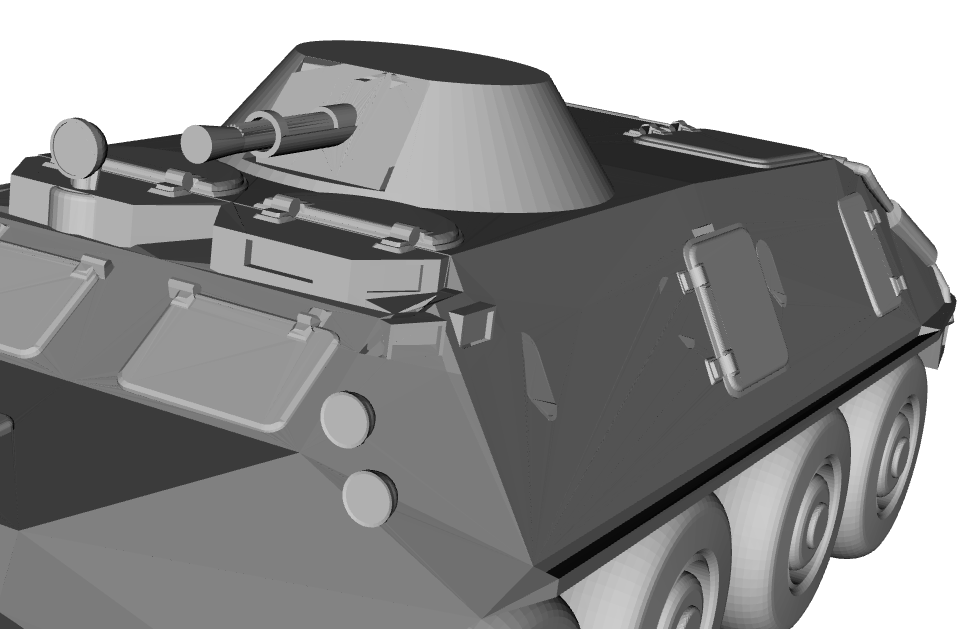 The hull is a series of ngon and inverted normals disasters. Aspiring 3D print modelers should remember to do everything in trigons and quads, and to look out for normals.

There are many reasons why a BTR-60 is the wrong choice when it comes to your First 3D Model. For one, the hull is full of irregular shapes and strange planes. All the internet references can't really translate that well, and the popular blueprint you can find on Google Image search is so wrong on everything. You really need to see the real thing and make reference pictures from various angles. As luck would have it, we have a tiny branch of our military museum that houses, among other things, a BTR-60. So I could get a better feel for angles and chassis. Then come all sorts of tiny details that are a pain-in-the-ass to model, like irregularly placed sights, bendy exhaust pipes, lamps and things I don’t even have words for. All the hatches can nearly bring you to tears, too. Basically, the wheels are the only part I got mostly right.

There's also the issue that BTR-60 does not appear in Team Yankee, so nobody really needs them that much.

In the end, frustrations did me in and it took me almost a year to get the BTR-60 into a state where it could be considered completed (albeit ugly and unprintable) - I have no doubt that I used primitive modeling techniques that also used more time and nerves. And it's still not cheap. Hell, even people more experienced than me have problems with that. Just check out the T-55s on Shapeways and you will see that they are not cheaper or not that cheaper than the ones offered by traditional miniature designers. Hell, traditional manufacturers (Zvezda) can crank out easy to assemble 1:100 T-34s at ludicrously low prices, to the point where you can't afford not to buy super cheap, easy to assemble WWII tanks.

The T-34 comes in five pieces and takes a girlfriend less than 10 minutes to assemble.

As far as the price goes, 3D printing has yet to become a danger to traditional manufacturers. Most easily accessible/cheap printers, filament and processes have a lot of quirks to work around (angles and minimum wall thinness is something that you really need to consider) and the it's really hard not to notice the hard layering. Maybe it will get better once Continuous Liquid Interface Production becomes more accessible. But for now, 1:100 ball is firmly in the traditional market's hands.

And then Zvezda goes to make their Hot War ("Totally Not Alternative Cheaper Miniatures For Team Yankee, I Swear On My Lenin's Bust") tanks either the wrong model (T-72B3 instead of TY's T-72A) or almost featureless hunks of plastic (the M1 Abrams). You'd think they'd work harder with models that would be the most desirable for TY players.

For me, I still have dreams of economy T-55s (why would I do that when there are free quality models out and about) and maybe making Epic 40K Mechanicum proxies to be used with Tau rules. But I have to get back to Blender and regain some of that early 3D modeling spirit. Because let me tell you, sometimes you hit the zone and spend 6 hours enthusiastically moving errant vertices around!