Fire at Will! - REDCON Review 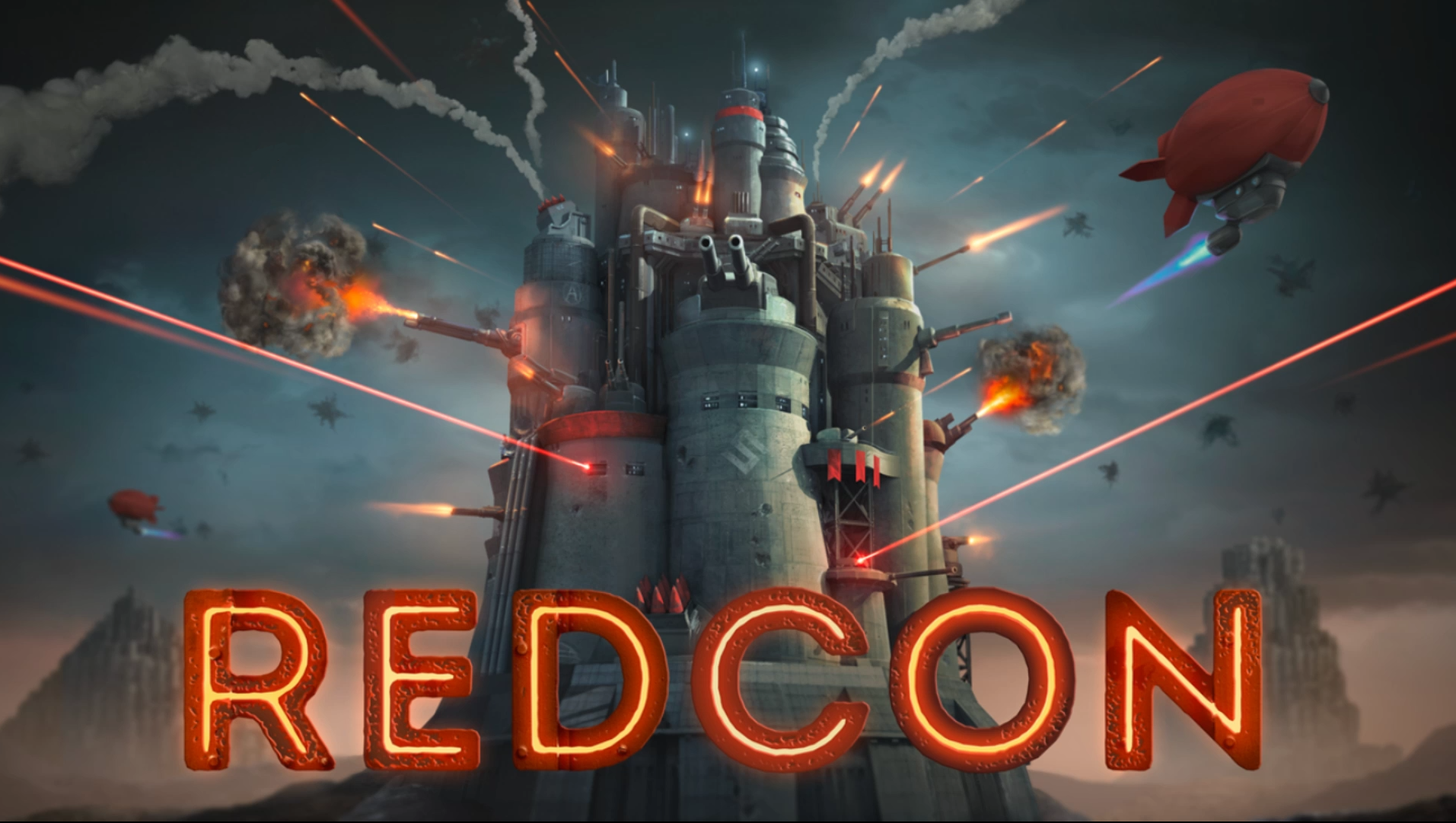 REDCON is an Indie Strategy game developed by Hexage, an independent game studio based in Prague that has been developing games for mobile and has ported some of them to other platforms. In REDCON you play as a Strike Commander, leader of a massive ever-changing firebase in a world in which the First World War never ended and has been raging ever since. Your enemy are the Krux, a military group led by Traitor General Kranz, and you must do everything you can to demolish, burn, dissolve, and detonate those that stand in opposition of Fuhrer and the Empire State. 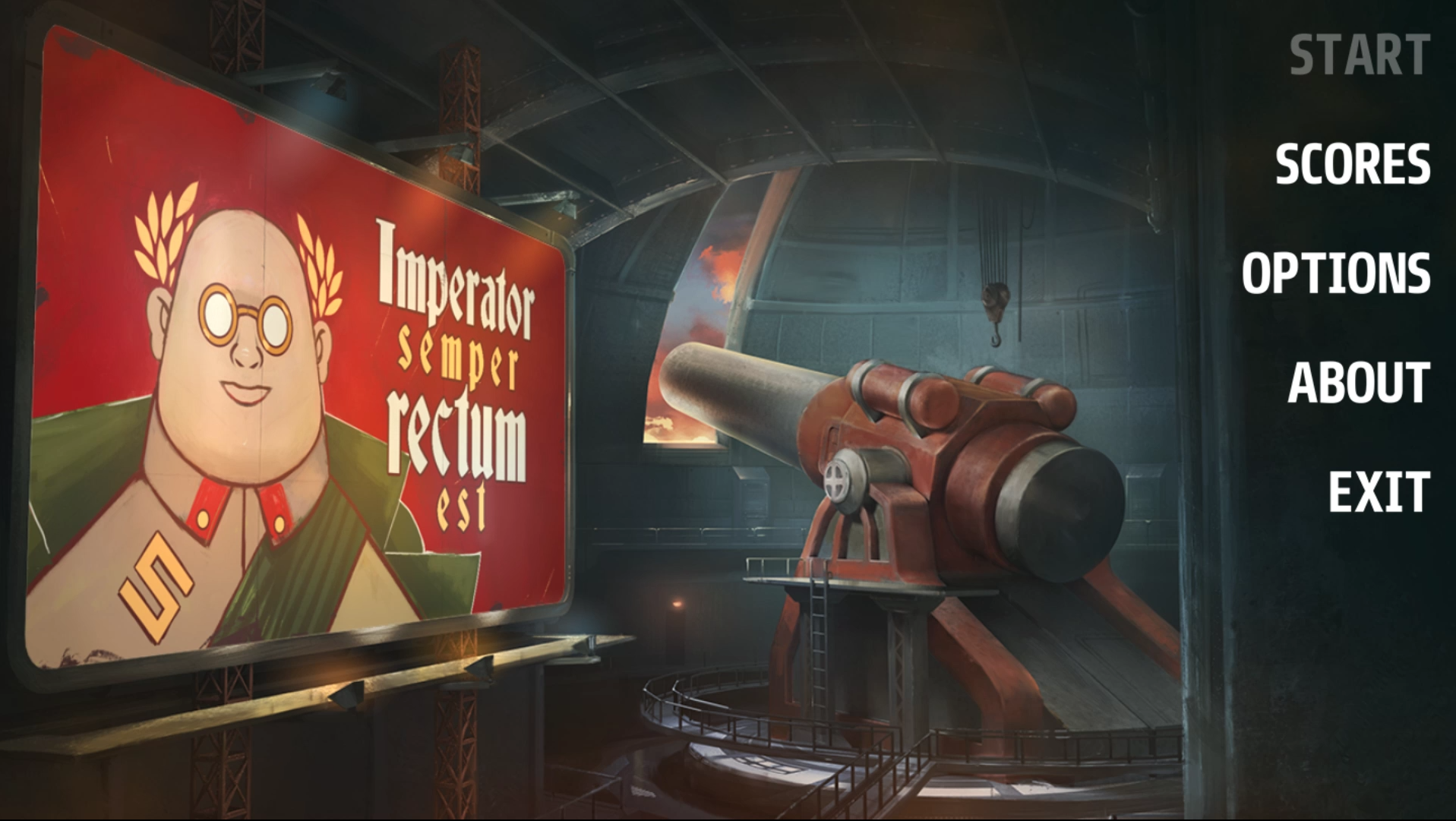 Yep, you read that line correctly. You are fighting for the Fuhrer to eradicate the enemy forces before you. Seems a bit sketchy, and the unfortunate choice of insignia does not help in this matter… That being said, it is clear that this is in jest however as the main menu includes a large propaganda poster that reads “Imperator Semper Rectum” and Fuhrer is generally portrayed as a dopey megalomaniac parody of a character. So questionable imagery aside, how does it play? 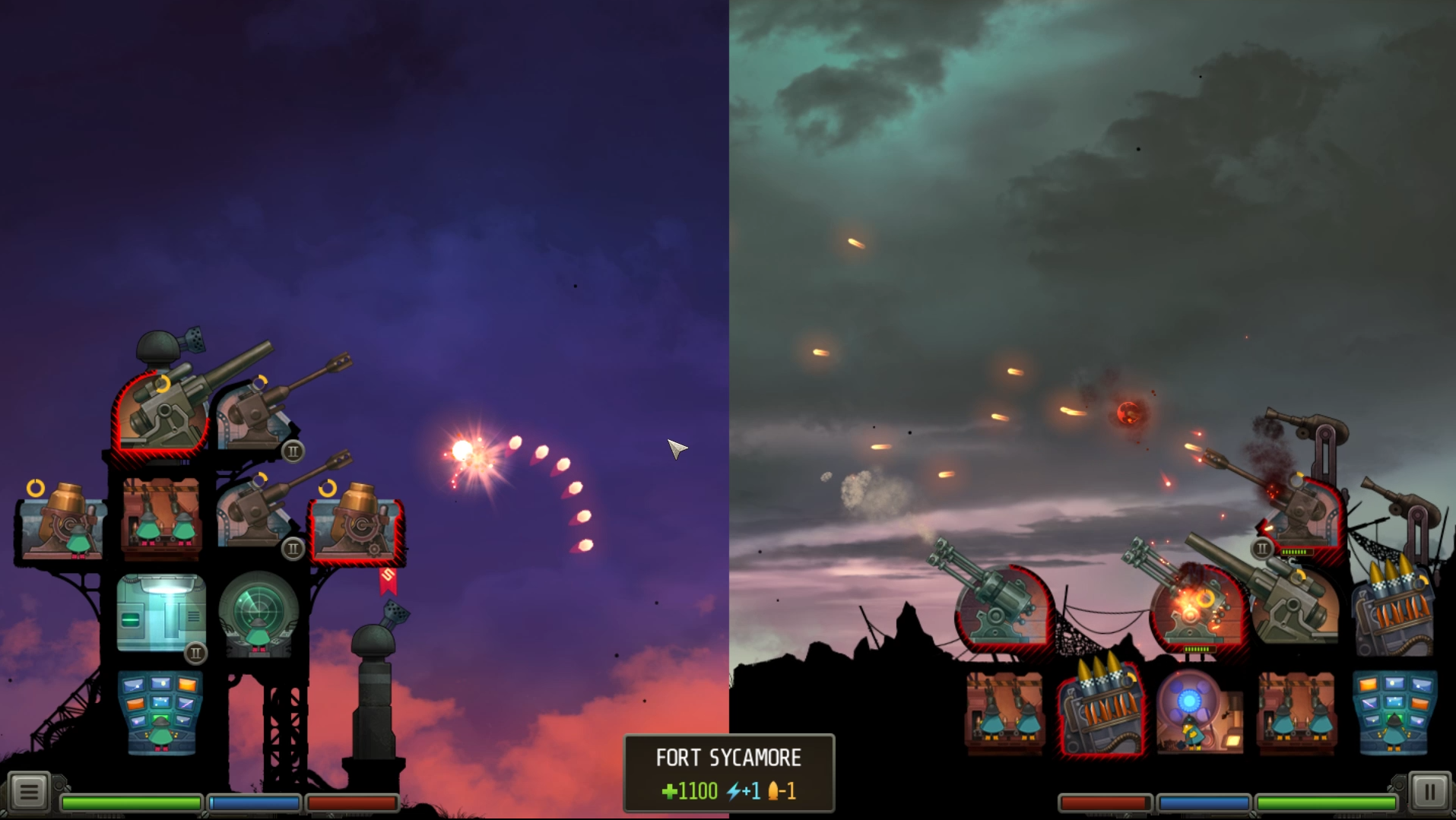 The basic gameplay of REDCON pits your war fortress against the Krux’s. In the beginning of the game your fortresses come pre-built with weapons, utilities, and a set layout in order to teach you the basic game mechanics. This section of the game lasts for quite a while and is very thorough. Once you have completed this tutorial section, you are allowed to choose the overall layout of your fortress which in general allows you to add one or two types of rooms by sacrificing others. You can use this to add weapons if you are not doing enough damage, add defense if you are taking too many hits, or add utilities if you need more resources. These resources are energy and ammunition. Weapons require energy and ammunition to fire and if you try to operate them with sub-par supplies, they will operate slower and slower. Weapons use more ammunition when you use the alternate fire modes, such as napalm and neurotoxin gas. Manning these weapons of destruction are your helpful little minions. They are your main means of repairing the fortress and the weapons and are invaluable to the fight. Needless to say these little bastards tend to be the first thing you go for when bombarding the enemy. You can win by three methods: Capture, Attrition, and Complete Annihilation. Using blimps, it is possible to transport your minions to the enemy base to attempt to kill off the enemy personnel and capture the base for your own. If you manage to destroy all of the sections of the enemy base with your artillery, you will also win. Finally, if you can’t seem to keep rooms knocked out because you are having trouble vaporizing the repairmen or can’t get a blimp close enough to the base due to thick defensive fire, you can always win be doing enough damage to deplete the overall base health. Each hit, whether it knocks out a room or not will cause damage to the fortress, and after enough hits it will explode in a fiery inferno, turning all the squishy little soldiers inside to piles of ash. As you win levels and progress through the campaign you will unlock new pieces to add to your fort and every so often a newer, larger fort with additional layout options. 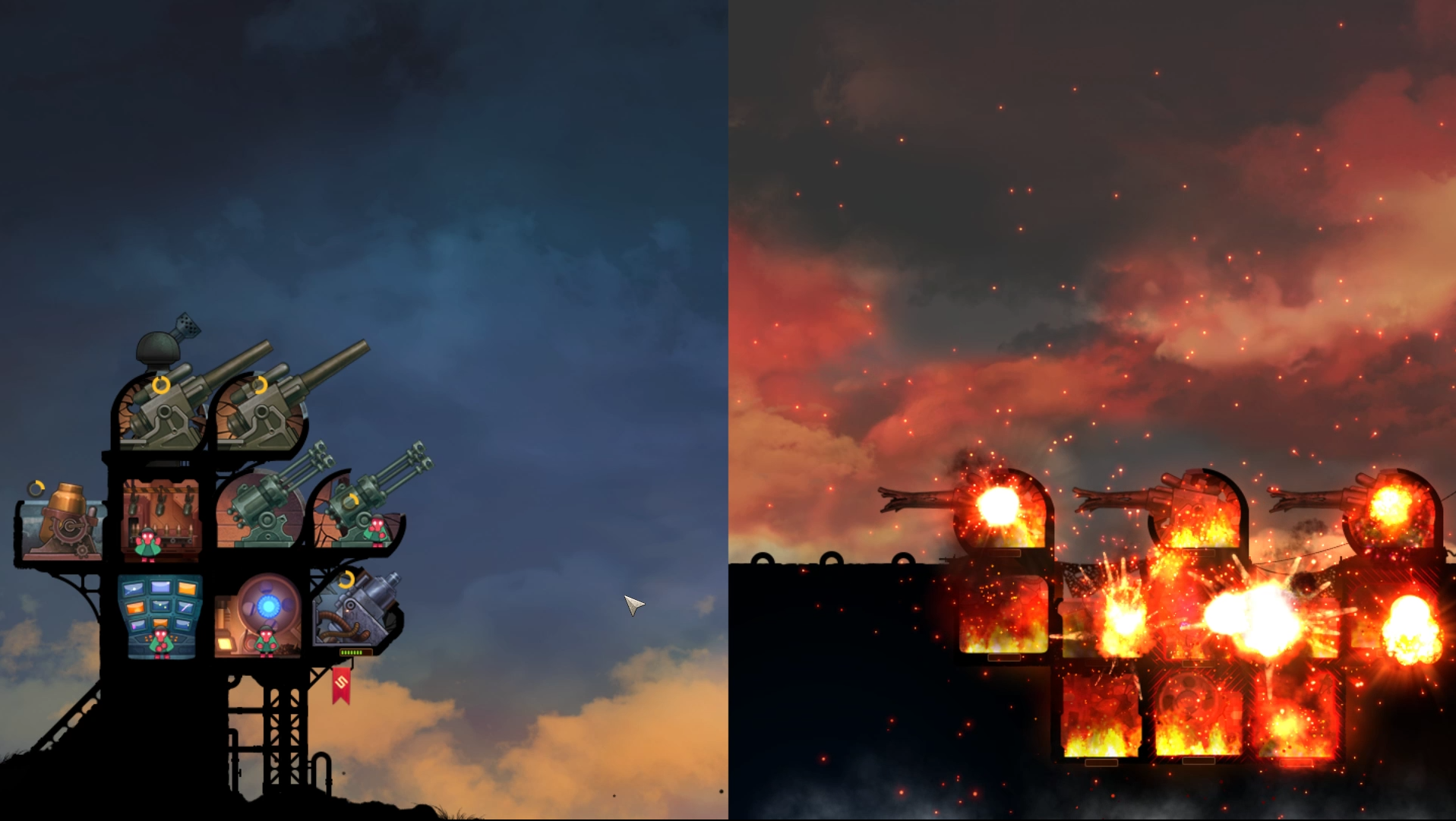 For a mobile game port, REDCON requires a surprising amount of strategy and careful thinking to succeed. The layout of your fortress is key, having too many weapons leaves you vulnerable to energy draining attacks, and too few leaves you without stopping power. You must carefully choose your targets with each volley, making decisions to attempt to take out infantry, knock out strong weapons, or to take out key utilities such as radar or munitions factories. A wonderful feature of the game is the ability to pause mid battle. During this pause you are able to change targets for your weapons, activate abilities, order troops, and re-allocate power. This allows you to finely control your arsenal and react to incoming threats efficiently. If you feel like the battle is not going in your favor, you can either reset or concede the battle. The reset just restarts the battle from the beginning where the concede option allows you to re-format you fortress if you think your current layout is not working. 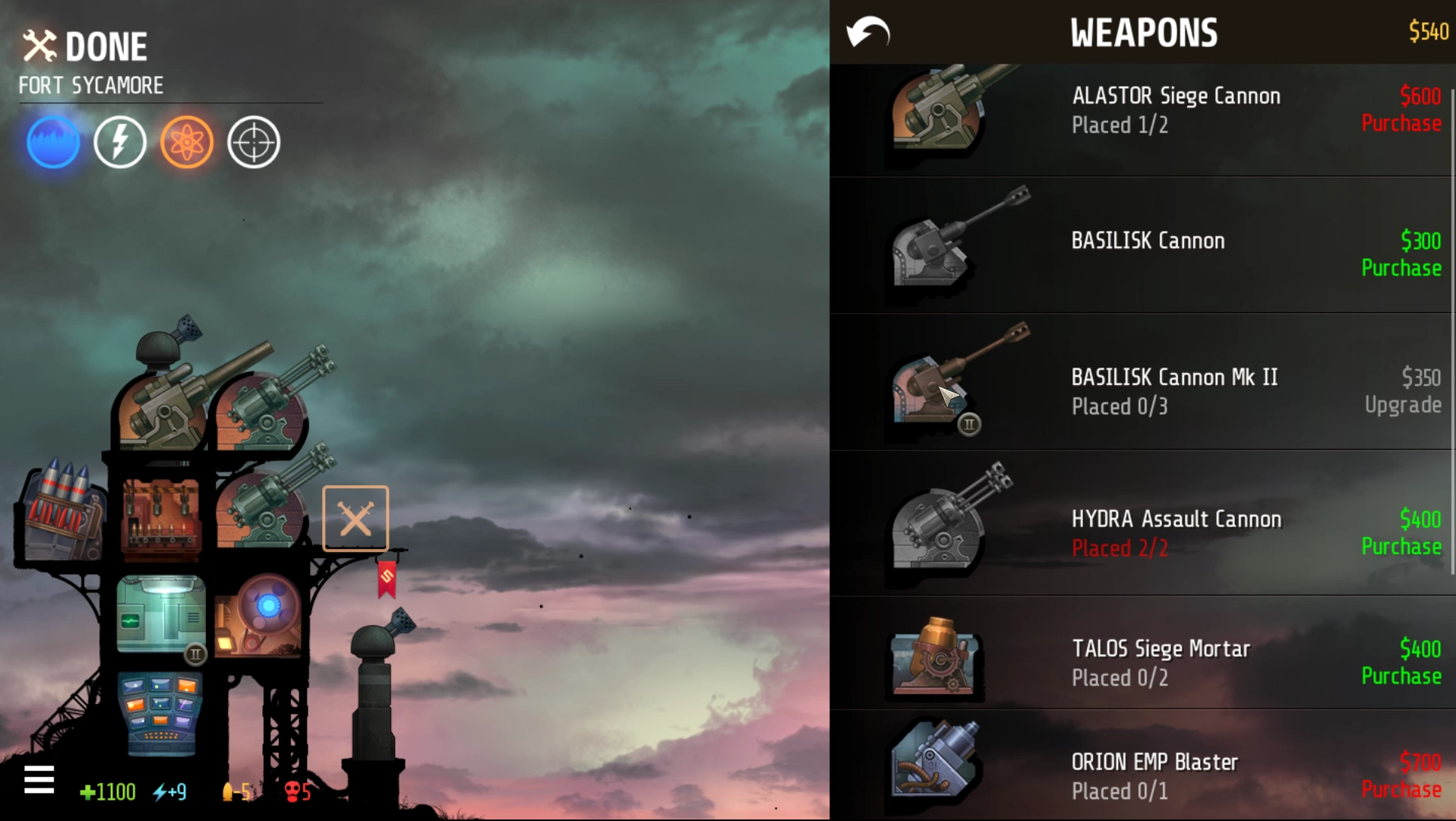 There are some unfortunate design choices, however. For one, the enemy infantry has a sixth sense for knowing when death is coming on swift wings for them. Normally, the radar utility highlights the rooms that are about to be hit which gives you time to get your troops out of the way of danger. On the enemy side, they know that a round is incoming regardless of whether they have working radar or not. This makes killing off the personnel infuriating at times when you send a shrapnel round into a room full of people only for them to leave at the last second at your shot does absolutely nothing. The solution to this are flash rounds that stun the soldiers for a limited time, but is still odd. In order to get new weapons and utilities you must buy them using money you receive for completing levels. Once bought, there is no way to sell the rooms back and when mixed with the inability to replay levels to generate more money, you can buy yourself into failure by not having enough money left to buy critical upgrades. Compounding on this, the only option to go back levels is to completely restart the entire campaign which is composed of around a hundred levels. So if you restart, you restart all the way at the beginning, set back hours and hours of playtime. Also, the game does get kind of repetitive after a while, even with upgrades every so often.

The musical soundscape of the game does a great job of complimenting the visual aesthetic of the game, using clockwork sound effects paired with electronic beats to play up the mechanical feel of the game. When fighting, the music has enough action and drive to fit the combat and there are a variety of tracks so the music does not get stale. The sound effects in REDCON very much take center stage in the sound design department. There is always a really tense moment of silence at the beginning of each battle (music excluded of course) that is suddenly broken by the first volley of fire. Starting with a few thuds of smaller guns back and forth and blending into a fusillade of explosions, shell whistling, and firing as things begin to kick off. Rooms explode and catch fire, the crackling licks of flame threatening to engulf the surrounding rooms. Soldiers panic and explode with a visceral “squish” noise when hit with shrapnel rounds. They choke, sputter, and expire when dosed with neurotoxin gas. Gruesome, but very detailed. 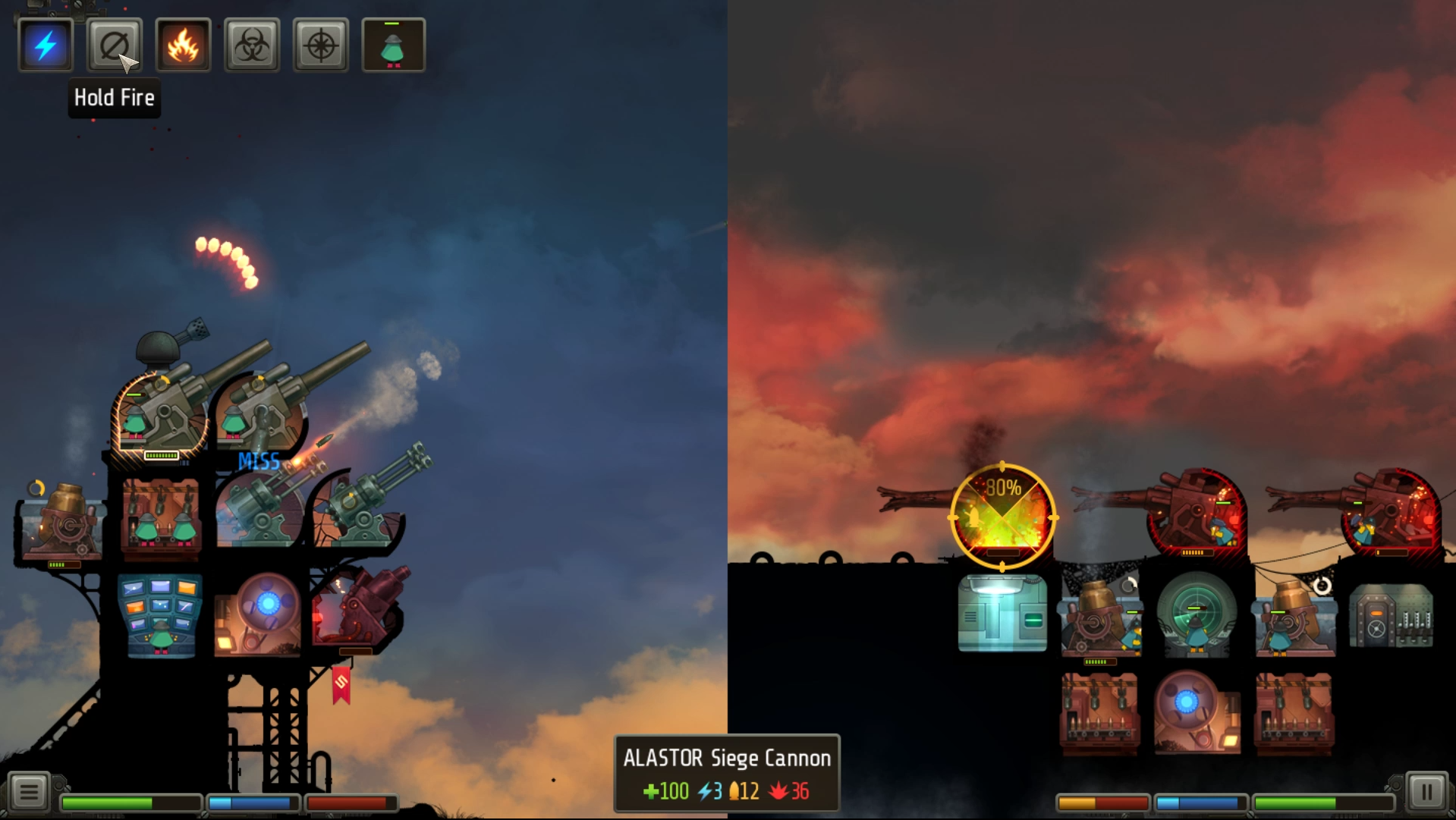 The artistic design of the game takes the background story of the game to heart, incorporating many aspects of real-life World War One from the gas-mask wearing underlings adorned with doughboy style helmets, to the massive boarding blimps soaring over the battlefield. They also update the look of course, as the game is set in the far future of that alternate timeline. There are nuclear reactors that arc electricity around the room, solar beams that fire fiery rays of death towards the enemy, and even massive energy shields protecting the base from harm. The infantry manning the weapons as well as the weapons themselves have a bounce to them that gives the game a cartoony feel. When you invade an enemy base your infantrymen will start to demolish rooms from within, pulling out jackhammers to destroy the room. The rockets fly hap-hazard through the air and guns recoil comically as well. The fortresses themselves are shown in cross-section view so you can easily see all of the internal components and monitor both bases. Yes, the graphics are not cutting edge, but they don’t need to be for this game and are overall really nice.

A lot of mobile game ports can often feel lazy, with no consideration given to how they will actually play and perform on the computer. Controls can be shoddy, graphics unaltered and low resolution, and layouts poorly designed. REDCON does still have artifacts of being a mobile game, but is none the less a surprisingly challenging strategy game that is great for those times when you have an hour to kill and want to drop some serious ordinance on those fools who dare oppose the might of the Empire State!