Knowing how to play to your strengths

Over the past 12 months, I’ve had the opportunity to be acquainted with some indie developers, a couple of which I even got to work with. It was a really great experience overall, which also contributed for me to have a better understanding of this side of the industry and a deeper appreciation for the games I play. I was in awe of some of those people I met, with drawing and musical skills that blew me away (like talking with someone about a cutscene you had envisioned in your head and them drawing exactly what you were imaging and talking about in real time!); skills I recognize I didn’t even understand until I saw them at work. I saw people understand their strengths, make the most out of them and be successful. On the other hand, I also saw many trying to do stuff “just because”, with no familiarity to it, and failing miserably.

Today’s blog post comes from how these experiences influence the way I look at and feel about at this game that was recently announced on Steam Greenlight called Eyes of Gods.

Described as a Visual Novel where you’ll be choosing sides between two major factions in this cyberpunk inspired world, the artwork drew my attention and so I decided to check out the trailer I shared above. And the first thing that pops into my mind is “Maybe it’s just me, but that doesn’t seem to have been written by native English speakers” mainly due to this phrase that pops 20 seconds into the video: “You don’t exist since a long time, Luca…”

Not being a native speaker myself, but through my efforts to come as close to it as possible as a translator, I’ve come across many common mistakes people make when directly translating what they mean into English – or another language, for that matter. More than a simple grammatical oversight, this specific sentence seems to be too close to those mistakes.

With said thought now deeply planted in my mind, I finished watching the rest of the trailer and then went to the developers’ website to find out more about this. I was, in fact, correct, as Solar Side Games is composed of Greek developers who have this to tell us about themselves:

And about their game: 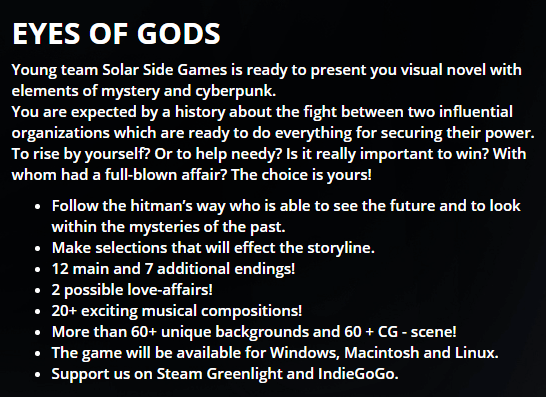 All right, it’s a pretty recent studio, this is their first attempt at a game and their English skills are not the most polished. Much better than many I’ve seen, but it’s a, by now traditional, situation of being able to understand the language but not use it in a fluid manner.

Now, you may be thinking “Come on man, give them a break”. And yes, I have no trouble admitting that I may care more about this stuff than your average person, both for personal and professional reasons, but I also try to view this aspect in relation to the overall project; which, if you recall, is a visual novel, a type of game that tends to be somewhat focused on the writing/text component. And if your game has a lot of text, it will draw the player’s attention to it, leading to a heightened attention to typos and awkward sentence construction.

Take, for example, a game like Journey. Here, Thatgamecompany honestly didn’t need to have anyone with strong English writing skills. It’s a much more sense-provoking experience, meaning that what they did need, and had, was a strong visual and musical direction (as well as something else that I will get to in a second).

The second major issue that arises from this trailer is related to storytelling skills and writing quality. Taking into account that trailers sometimes need that extra emphasis on exposition to get the major key points of the story across, this one basically tells us everything we need to know about the two opposing factions: namely “the Order which is ready for everything to keep its power” and “the rioters from the Alliance who want to make a bloody way to the victory of justice”.

Not one to judge a game’s narrative by its trailer – many outstanding experiences would have suffered needlessly for it – in this case I believe it’s safe to assume that, being a small indie team, the writer is also probably in charge of copywriting and marketing (as I was, because as a translator I was the go-to language guy, besides writing as well). And the sample of storytelling we get from this trailer is heavy-handed and generic at best, which is not a good sign for a plot-heavy game.

Back to Journey, the other element that they showed a strong direction and understanding in was storytelling. Storytelling skills and language skills are not the same thing, as we have many types of storytelling. But in specific games, like visual novels, they are intricately connected. 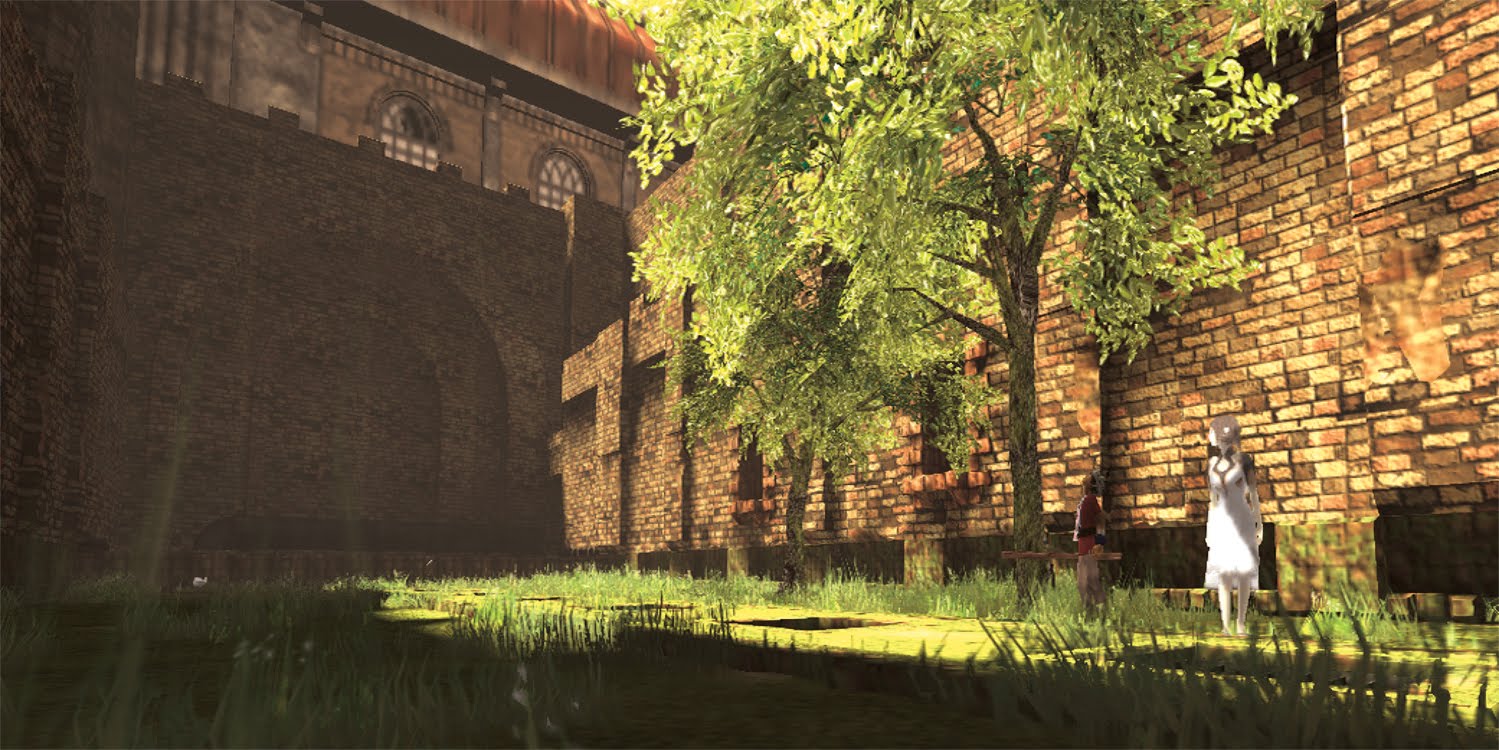 Going back to one of the projects I worked on, despite having some immensely talented visual and musical artists on board, they decided that their first game would be 3D based game with an emphasis on combat. Which would not be a problem; only their 3D was acceptable at best and no one had any idea how to design and program combat mechanics. And both those elements turned out not good and awfully bad, respectivelly.

This all harkens back to a concept that people really seem to dislike called The Comfort Zone - always preaching about the need to leave it. Which is a sentiment I agree with, in order to make us push our limits, develop and grow. Problem is, it’s ill-advised to simply leave one’s comfort zone if there’s no reasonable understanding of what that zone means or entails.

In the case of that 3D/combat game, I don’t mean they shouldn’t try to make this sort of game at all. I mean that, if that’s what they really wanted to make, then they should recognize their own strengths and limitations, so that they’d be humble enough to try and find someone who’d be able to help them tackle those needs.

Sure, when there’s money involved – better yet, a lack of it – this is not as easy as it may sound. But then again, they got me, whose skills are language-based and has some understanding of design, and then eventually got a guy who was willing to help them and has a really strong grip on combat design. So, it’s also a matter of searching and making a case for your project. 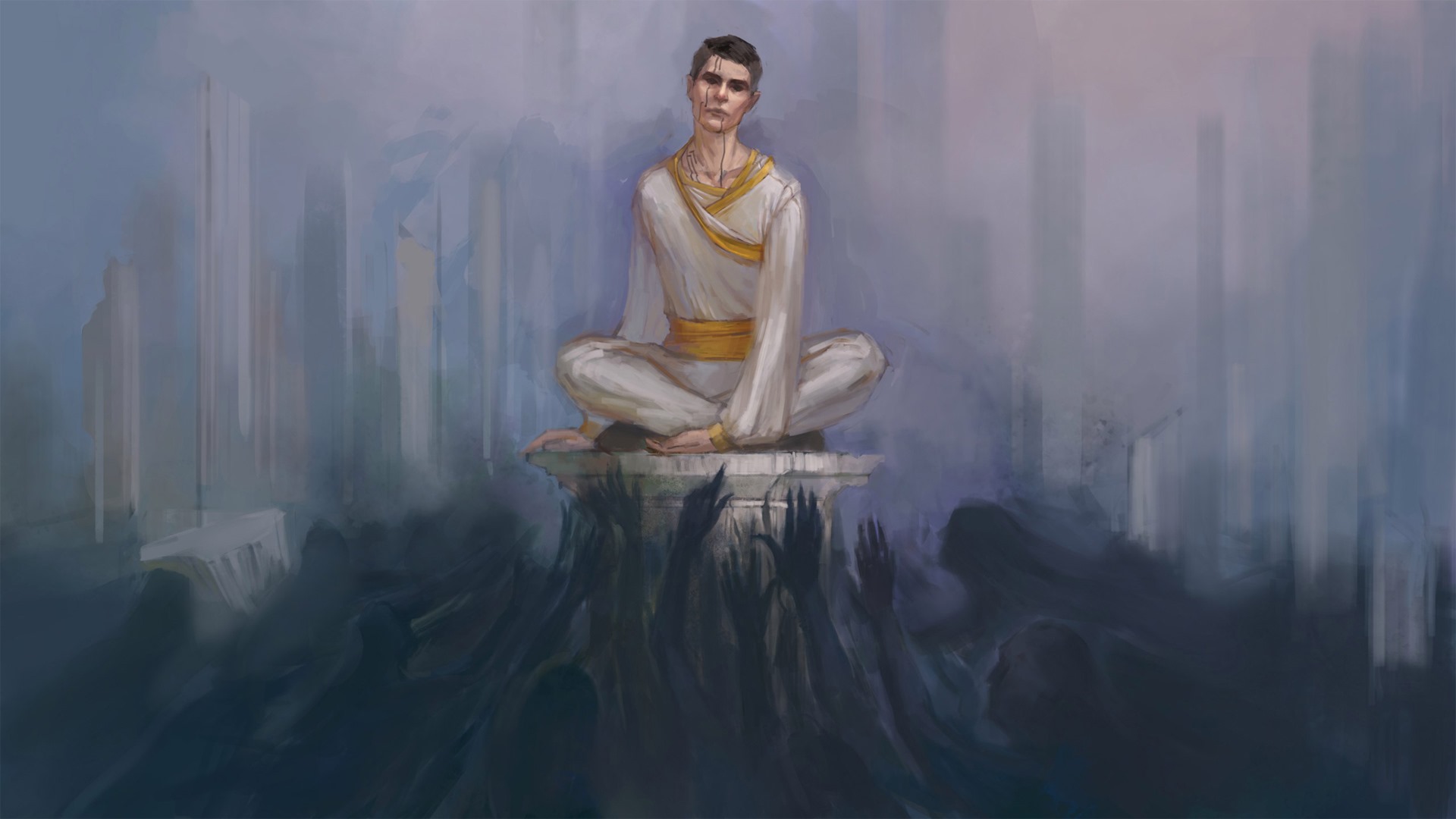 My point is, if you’re making something, anything, try to focus on your strengths. And if there's something that you want your project to have that’s not part of those strengths, contact people, collaborate. Teamwork can indeed be the key.

The people at Solar Side Games really seem to want to make this kind of game, but unfortunately two of the most important skills they need don’t seem to be present at the moment. How will they deal with this? Will they go through with it by themselves and possibly end up with a lackluster result, or will they leave their comfort zone the smart way and find someone who’s able to help them?

Be that as it may, I wish them the best. I know first-hand that how harsh it can be.