EDIT: Because the Dawn of War III announcement states the game has "Three Devastating Forces" (Eldar, Space Marines [BLAHD REHVENS, because of course], Orks) I am cancelling all hope. Relic can fuck right off and Sega can join them. FAIL.

So Relic is announcing something concerning its long-running RTS Warhammer 40,000 series Dawn of War tomorrow. Suffice it to say those of us who enjoyed the series (such as myself) are curious and hopeful that we'll see a proper sequel after years of playing and replaying its previous entries. The original Dawn of War was a fair average Real-Time Strategy that had some entertaining ideas bubbling on its back-burners, and while DoWII was an entertaining romp that combined RTS with squad-strategy and a bit of a "loot 'em up" mechanic, it didn't really capitalize on what made the first DoW so much fun. It's multiplayer was atrocious, too. I don't care how much you enjoyed it, it was a load of old wank in my book.

But we're all excited and ready to be hyped up for DoWIII (maybe), right? Well, yes and no. Yes because Relic, despite a few hiccups here and there, really know their Warhammer 40k lore and while they don't fully capture the feel of a grim, dark future, they do at least make an entertaining and inoffensive effort. Games Workshop can barely piece together its own lore anyways so we'll give Relic a pass on that. 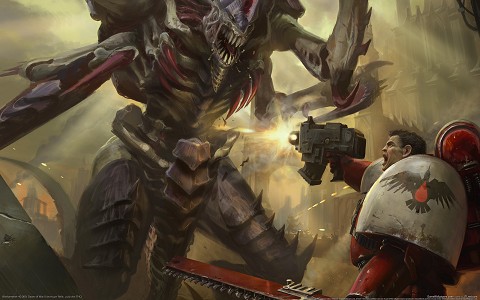 On the other hand,a new DoW (again, maybe) means that in all likelihood, we're going to be seeing the return of the BLAHD REHVENS, the Imperium's most uninteresting Chapter of the Emperor's Space Marines.

The BLAHD REHVENS were set up way before Dawn of War was even a thing, appearing Warhammer 40k books like the Games Workshop tie-in magazine White Dwarf. Those early editions suggested that the BLAHD REHVENS (no, I'm not going to stop using that joke) were a Chapter without a history, loyal to the God-Emperor of Mankind but unsure of their origins. The Chapter had such an inordinate amount of psykers--40k's mix of psychics and wizards (no, not kidding)--that they fielded entire squads of Librarians (the Space Marine version of a psyker) and instead of a typical Chapter Master had a council of pskers to lead them. They were obsessed with knowledge, leading to their (somewhat long-winded) battle-cry "knowledge is power, guard it well."

Now any casual player of Warhammer 40k will let you know that fielding squads of mind-warping psyker Librarians is probably the most god-mode thing ever heard of outside of loading the Golden Throne of the Emperor onto a tank and using his psychically-charged unliving corpse to fire mind-nukes at things, so suffice it to say the BLAHD REHVENS never really got to shine in the tabletop version of the game. Skip a few years forward and Relic decided it needed its own special snowflake chapter of Space Marines to focus their games on, so as not to step on any of the oh-so-precious lore Games Workshop has been shredding, gluing back together, then feeding to Matt War and publishing whatever excretes from his body. Someone threw a dart as a board and the BLAHD REHVENS were chosen. Or maybe they actually cared which Chapter they wanted, I don't know.

Of course, a video game couldn't field a squad of pskyers either, not without giving the other armies available in the game--the Chaos Space Marines, Eldar, and Orks--something OP as well like, I dunno, a Squiggoth, Avatar of Khaine and a Daemon Prince (OH WAIT) so the BLAHD REHVENS got a bit of a neutering. They still technically had a council of psykers, but now they mostly just sat in a room somewhere braiding each other's hair and giggling while the remainder of the chapter were the typical cookie-cutter "For the Emperor!" Space Marines who have about as much actual personality as an adamantite-plated potato chip.

Dawn of War II, with its stronger squad-based and therefore character-focused storyline (despite having a voiceless point-and-click commander) introduced us to some interesting characters like Tychus and Cyrus, not to mention bringing back Gabriel Angelos who if you've read any of the novels surrounding the games (I wouldn't) is something between the savior-in-waiting of all Eldar (PFFT) and a carbon-copy of Marneus Calgar, Chapter Master of the Ultramarines. But he's still a bit of a badass, so I guess we'll let that slide. The Chapter dealt with the possibility of being corrupted by Chaos and if you play the game right come out purified and ready to stand proud as the Emperor's Finest blah, blah, basically the Chapter goes from "kind of interesting" to "shit, which ones are they again? The red ones, right?"

So what's my cock-inhaling point? A few years back, it would have been acceptible to have the Blood Ravens as the focus of the game. Now though? I think it's time to move away from them and put creative control in the hands of the players. The whole point of the Warhammer tabletop games is collecting the army you want to collect, painting them the way you want to paint them, and playing them the way you want to play them (in my case, badly). Dawn of War III shouldn't be some epic story about one Chapter's efforts to boil themselves down into medocrity, it should be about a player forging his own legend, his own heroes and his own army. And that army should come from ANY of the available factions. Even the ones that have been largely ignored over the past decade or two, like the Sisters of Battle (despite having a well-remembered appearance in DoWI: Soulstorm. Create a series of Special Rules, allow the player to pick one or two to represent unique aspects of his Army, introduce a BUTTLOAD of unique wargear, grant the player's the same customization options for their command units (at least) that they have in the tabletop version, and create an online multiplayer community they could rival groups like Starcraft and League of Legends. Imagine it, a LoL community (sans the toxicity, one would hope) where you lead armies into battle, not just one specific hero.

But there I go again, dreaming of idyllic Warhammer games that will never be.