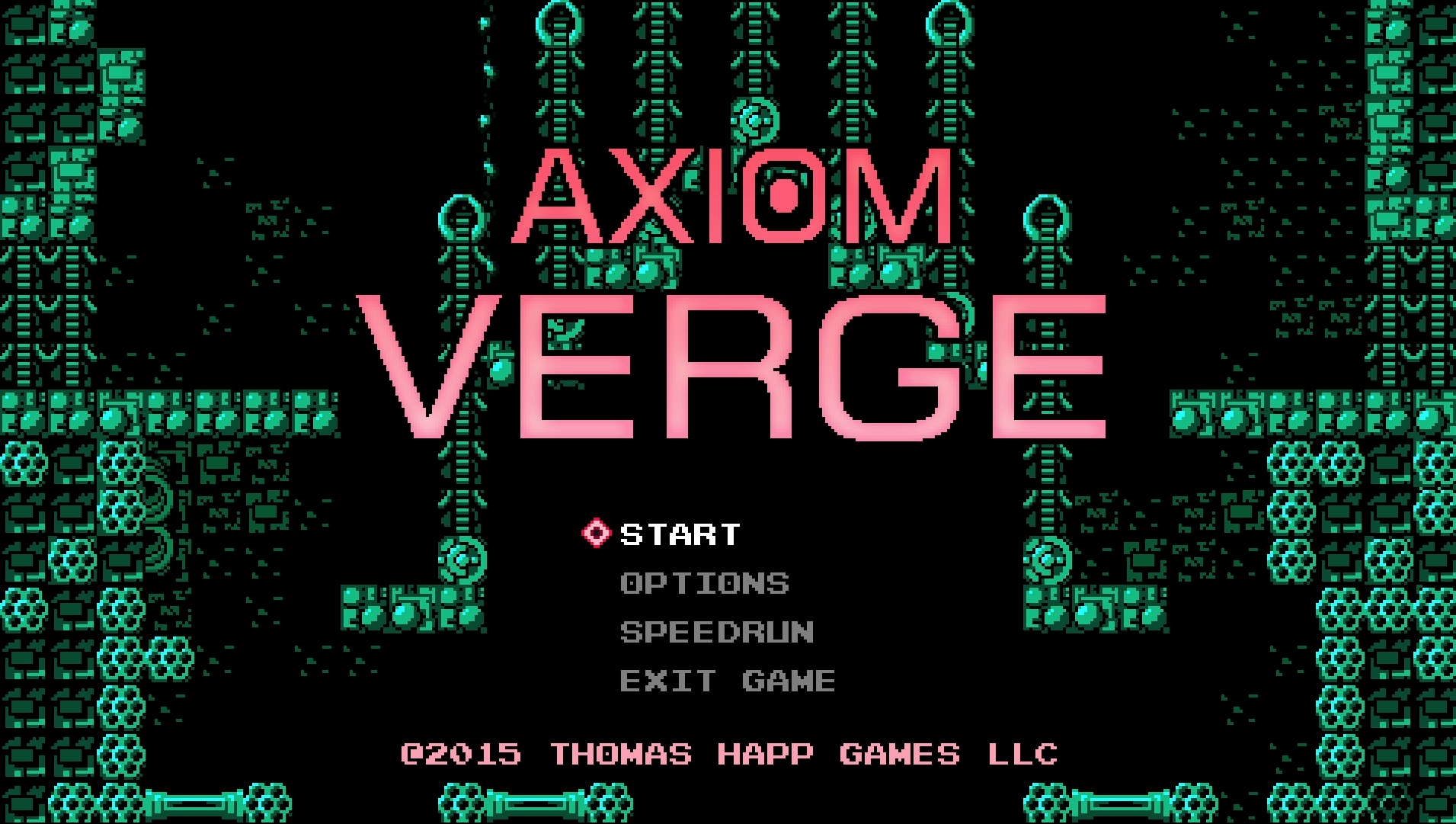 Axiom Verge is a Metroidvania style 2D side-scroller  game where you play as Trace, a scientist who suffers critical injuries after an experiment conducted by his partner and himself goes terribly awry and causes the facility to explode. When Trace returns to consciousness, he finds himself transported to the alien world of Sudra and must fight his way through room after room of alien creatures to return to earth. As he traverses the strange and deadly world, he communicates with an AI intelligence by the name of Elsenova who is a “Rusalki”, a race of large mechanical humanoids integrated into the world of Sudra. Trace learns that an evil entity by the name of Athetos seeks to destroy the Rusalki (and therefor his means of returning home…) and that Trace is the only one who can stop him. 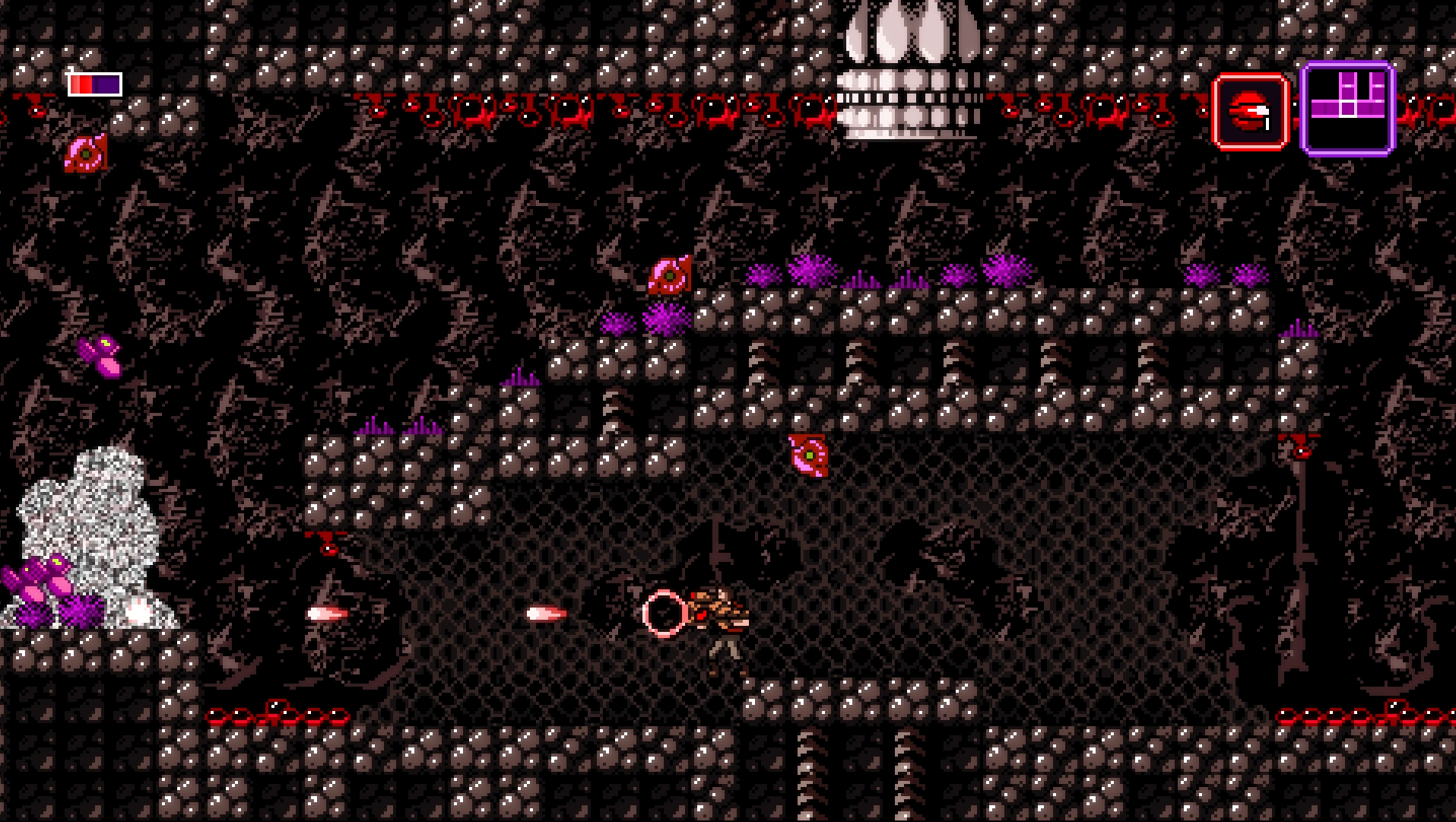 The term Metroidvania is an apt one for Axiom Verge. To start with the gameplay mechanics are extremely similar to that style of game. You can shoot up, down, left, right, and in the diagonal directions while moving (shooting direction and looking direction are one in the same) and are able to stop in place and aim your shots if you hold down a button. You can crouch to avoid enemy fire and can jump to reach higher platforms. If you want to change your weapon type, the game will pause and bring up the weapon selection menu with a little insignia of each weapon arrayed in a line or circle depending on player preference. In the menu, you can see the map of the explored regions of the sector you are in, with the relative region of the sector outlined on the world map by its side. You can also read any lore entries you have collected, and review what weapons and items you have collected thus far. 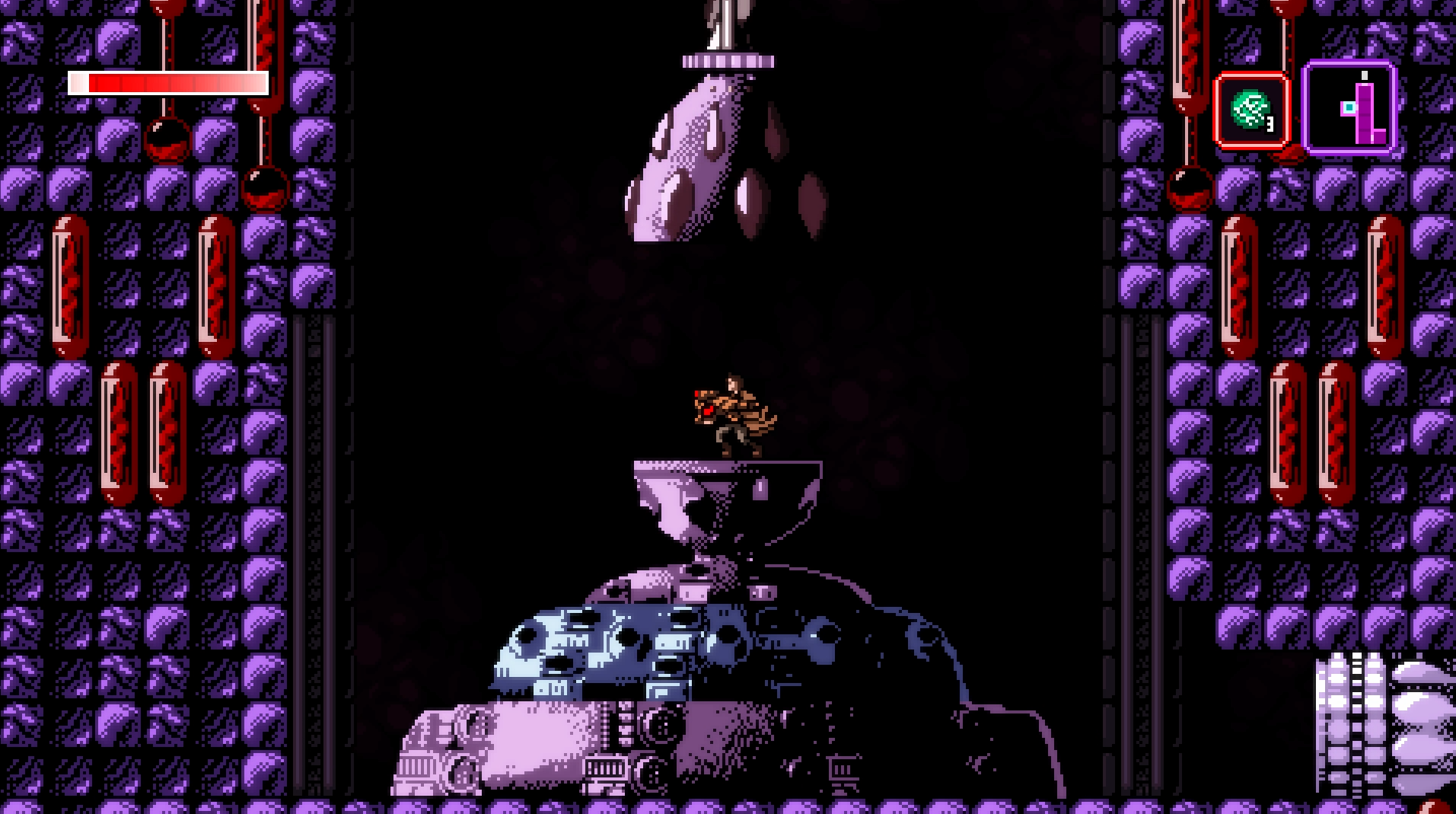 There is a generous mix of platforming around the landscape and combat with the assorted creatures that inhabit Sudra. Your health is measured via a life bar and does not regenerate unless you kill enemies and they drop healing orbs or you make it to one of the many save stations. These save stations are spread out across each of the sectors that make up the map and are in the form of a large egg shaped pod on a pedestal that encapsulates you, saves your game, and refills your health bar when used. These stations also respawn you if you fail to dodge that last energy bolt headed for your chest and are killed. However, it should be noted that you will be respawned at whichever pod you saved at last, so you will have to go all the way back through each room to get back to that sector you were exploring 30 rooms away from the last place you saved. As you are exploring the map, you will come across many different items that give Trace new abilities, power-ups, and weapons that will allow Trace to be more combat effective and reach previously unreachable chambers. For instance, at one point you find a grappling hook which allows you to grab onto the ceiling and environment above and swing from it to reach areas that your jump just does not quite have the height to get to. As for weapons you start with the axiom disruptor that fires small burst of energy in a semi-auto fashion, but quickly find upgrades such as the Kilver which fires a large arc of electricity from the gun. 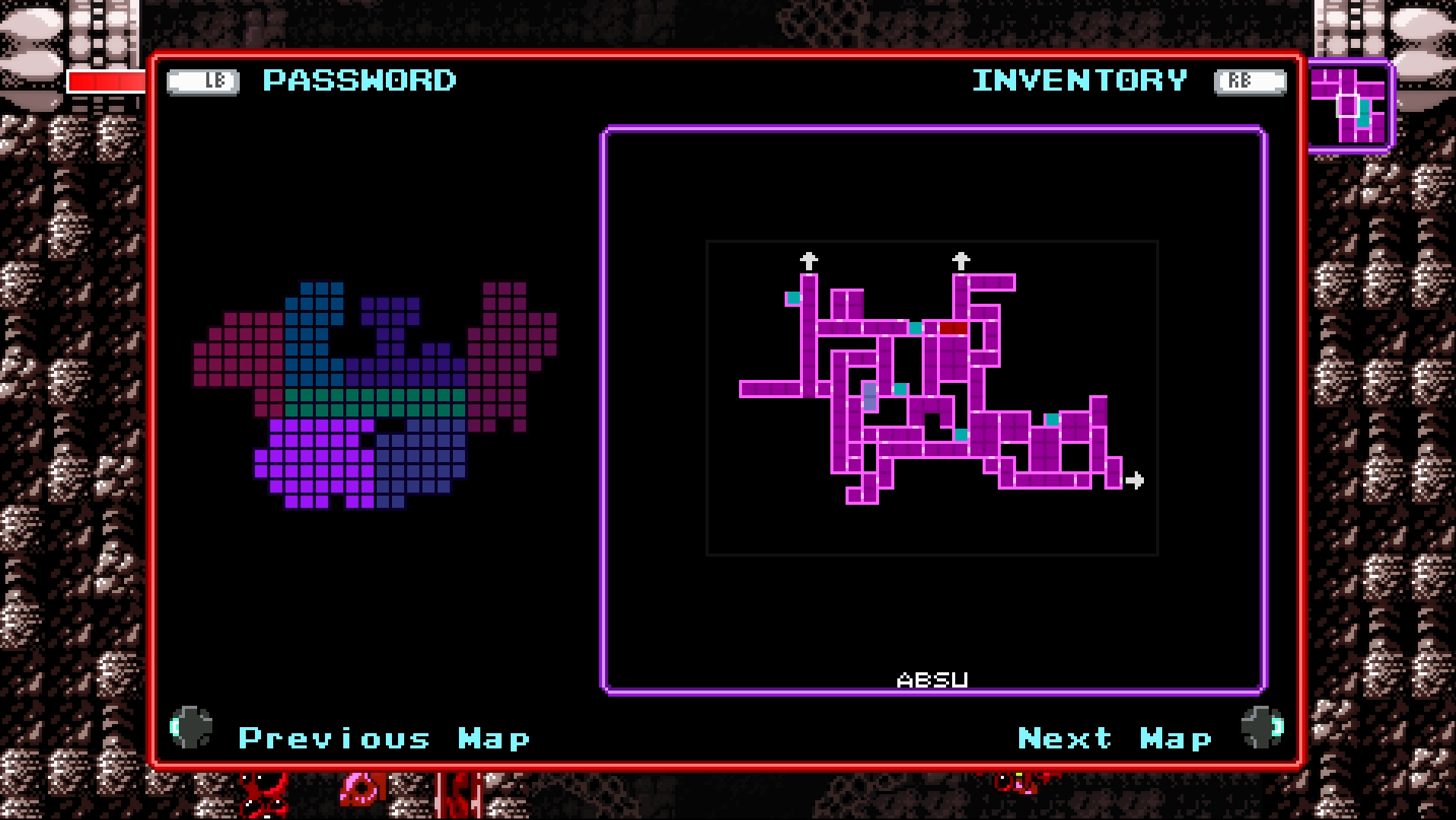 Earlier when it was said that the map was massive, that was not an exaggeration, the map is absolutely huge. As mentioned before, it is made of distinct interconnecting sectors that can each have upwards of 20+ rooms to explore. And since there is no teleport or warp ability in Axiom Verge you will have to hoof it all the way across the map if you forgot something earlier or now have a way to open a door in a chamber 24 rooms away. After playing for over 8 hours, a mere 50% of the map had been explored. By that point it was taking several minutes in real time to get from one side of the map to the other. A large amount of playtime is spent traveling, especially when it is not always clear where you need to go next and certain rooms require special items to get to which involves a whole bunch of backtracking. 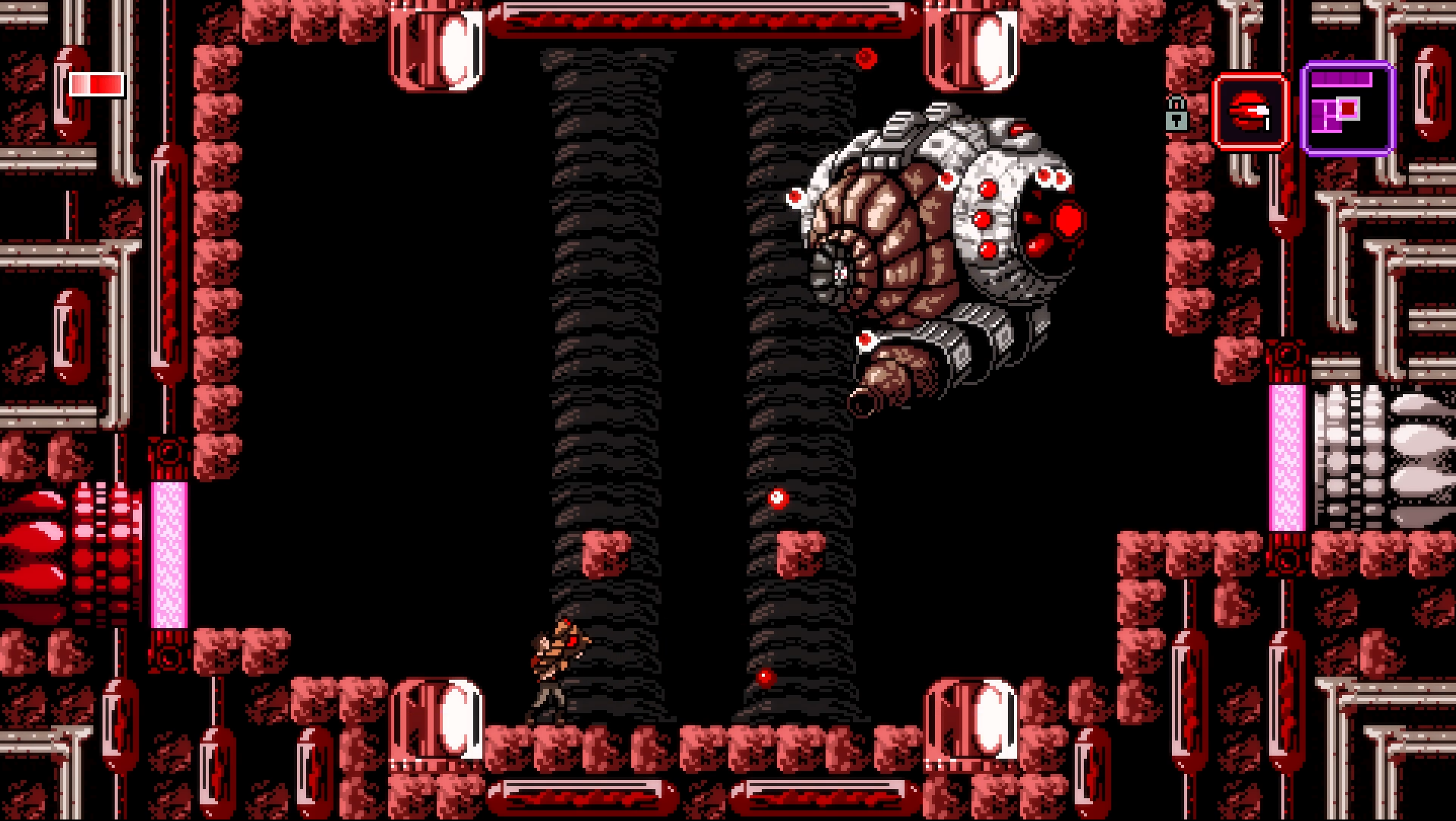 In addition to the standard rooms, you will find boss rooms containing, you guessed it, bosses. These rooms are marked out by a preceding room containing what appears to be a large alien skull in the background of the chamber, and an immediately adjacent room containing one of the save game pods. When you do gather the courage to go through the red colored tube to fight the boss, you are greeted with a black screen showing only the tube and your character. Then, a tremendous roar is heard and the camera zooms out while the room and the monstrous beast you are about to fight comes into view. Each boss fight gets bigger and bigger, dwarfing you character in size as the creature tries its best to smear you across the walls. The boss fights were fun and interesting, as each had their own attacks and attack patterns that took some time to learn and capitalize on. Some remained stationary and used ranged attacks to try to hurt the player, while others were much more dynamic, moving across the room and forcing the player to move as well as the fight raged on.

One of the most enjoyable aspects of Axiom Verge is its soundtrack. Kicking in at the menu and keeping up the energy throughout the game, the soundtrack does an excellent job of fitting the look and feel of the game with electronic music that has a serious retro feel to it and heavy bass to drive the beat along. Even the environment can’t help but move with the beat; flora and fauna alike bob to the beat of the music as you are moving through the world. This synchronization of audio and visual was a nice touch and made Sudra feel even more alive. The musical score also gives a unique personality to each of the sectors with a unique song for each one. Warm settings are keyed by more energetic almost hectic melodies and colder settings are highlighted by calm and peaceful synths. There is also a lot of tension that is brought about by the music that lends to a sense of unease and mystery throughout the game. In addition the music that compliments the boss fights really makes them seem more epic and meaningful.

The sound effects were similarly well done, from the players striding steps to the sizzling shock of the Kilver. Each weapon has its own sound effect set and sound wonderful when used. The roar mentioned earlier that the bosses let out before commencing battle is definitely formidable, possessing a distortion that plays up the bio-mechanical aspect of many of the bosses. The sound effects succeed in fleshing out the world and bringing life to the characters and environments.

Axiom Verge uses a Retro art style that draws inspiration from games like Metroid and Castlevania, hence the Metroidvania description. The characters communications to one another are shown in speech boxes that show who is speaking. There is detail galore in the characters, the enemies, and the environments you fight in. A close inspection of Trace shows his long semi-curly hair moving around with him, and the pixel shadowing really adds a lot of depth to the character and makes him look really good. The backgrounds of some of the chambers are layered and are given parallax in order to convey a sense of depth and openness. When Trace fires his weapon you can see him recoil from the blast. There are a ton of effects as well. Enemies and portions of the environment will splatter when shot sending pixelated pieces flying across the screen. Later in the game there are distortion effects that skew the screen and provide a feeling of sickness or unease. When using the drill it will first spin up and then fire, and when done will proceed to spin down slowly as if it actually has momentum. Finally each area has its own unique design such as one sector that had a fungal feel to it, with mushrooms growing out of the walls and large mushrooms serving as platforms to jump on.

Sudra is a dangerous place teaming with ferocious monsters and deadly machines, with only your gun and manual dexterity to keep you alive. There is so much to explore  in Axiom Verge, and although at times this feel like a detriment, it is still fun to discover a cool new area using that fancy new tool you got from laying waste to hordes of enemies while traveling hallway across the map to eradicate a bio-mechanical-abomination. The enemies keep the gameplay interesting with unique attacks and behaviors that keeps the player guessing and on their toes the whole time. The environments are highly detailed and very much do feel like they belong to an alien world. And all the while the music is invigorating and compliments the action playing out on screen exquisitely. If you want to drop into the strange alien landscape of Sudra, explore the labyrinth of chambers it holds, and do battle with monstrous beasts, then Axiom Verge is for you. Athetos awaits you…