Why You Should Play Blue Sheep

Blue Sheep is a 2.5D Platformer-Adventure game in which you play as the “Outsider”, a young girl who is experiencing the memories of someone who has opposed “The Beast”. The Beast and The Influence are evil forces that seeks to destroy the people of the land, the beast often manifesting itself as a nightmarish shadowy wolf creature that serves as the games main antagonist. Shortly after leaving her home, the outsider finds herself wandering through a mystical, wondrous world following after the one that stood against the beast and learning what became of him as the story progresses. 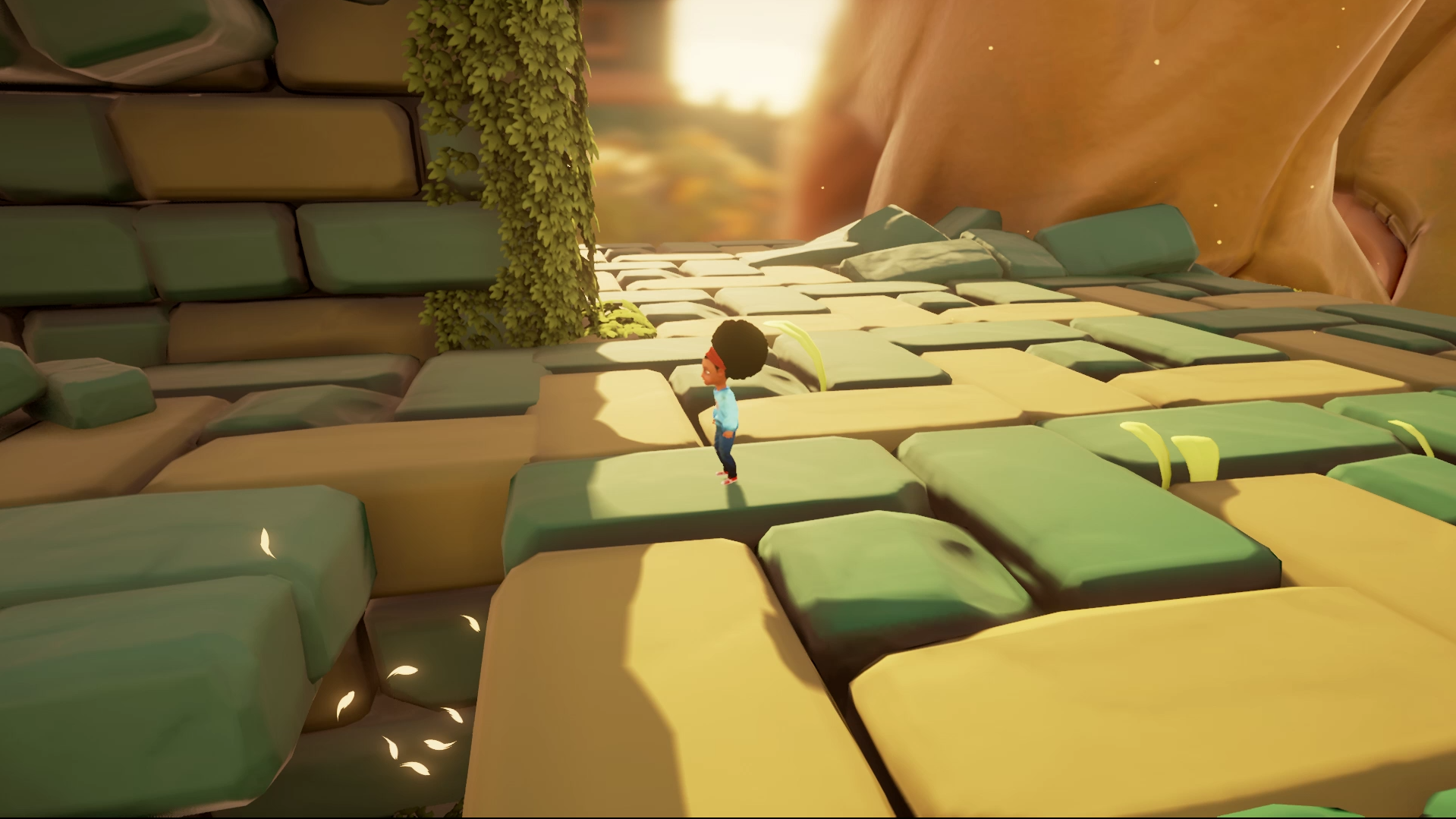 The main body of the gameplay in Blue Sheep revolves around platforming puzzles ranging from simple get from point A to point B jumping puzzles to more complicated sequences that require careful use of game mechanics introduced to the player throughout the game in order to be solved. Some puzzles required pushing buttons to open up doorways or using a flower that allows the outsider to float over longer distances than she can normal jump or dash to. One puzzle in particular was quite confusing, involving a series of rooms containing sculpted stone faces on the walls with either all eyes open looking towards one of the two doors out of the room or all eyes closed. Going through a doorway leads to another face room, and the next doorway to another face room, and so on and so on with an occasional enemy. The solution was not very clear, and led to half an hour of trial and error before stumbling upon the exit. Besides that, the puzzles were fun and engaging. 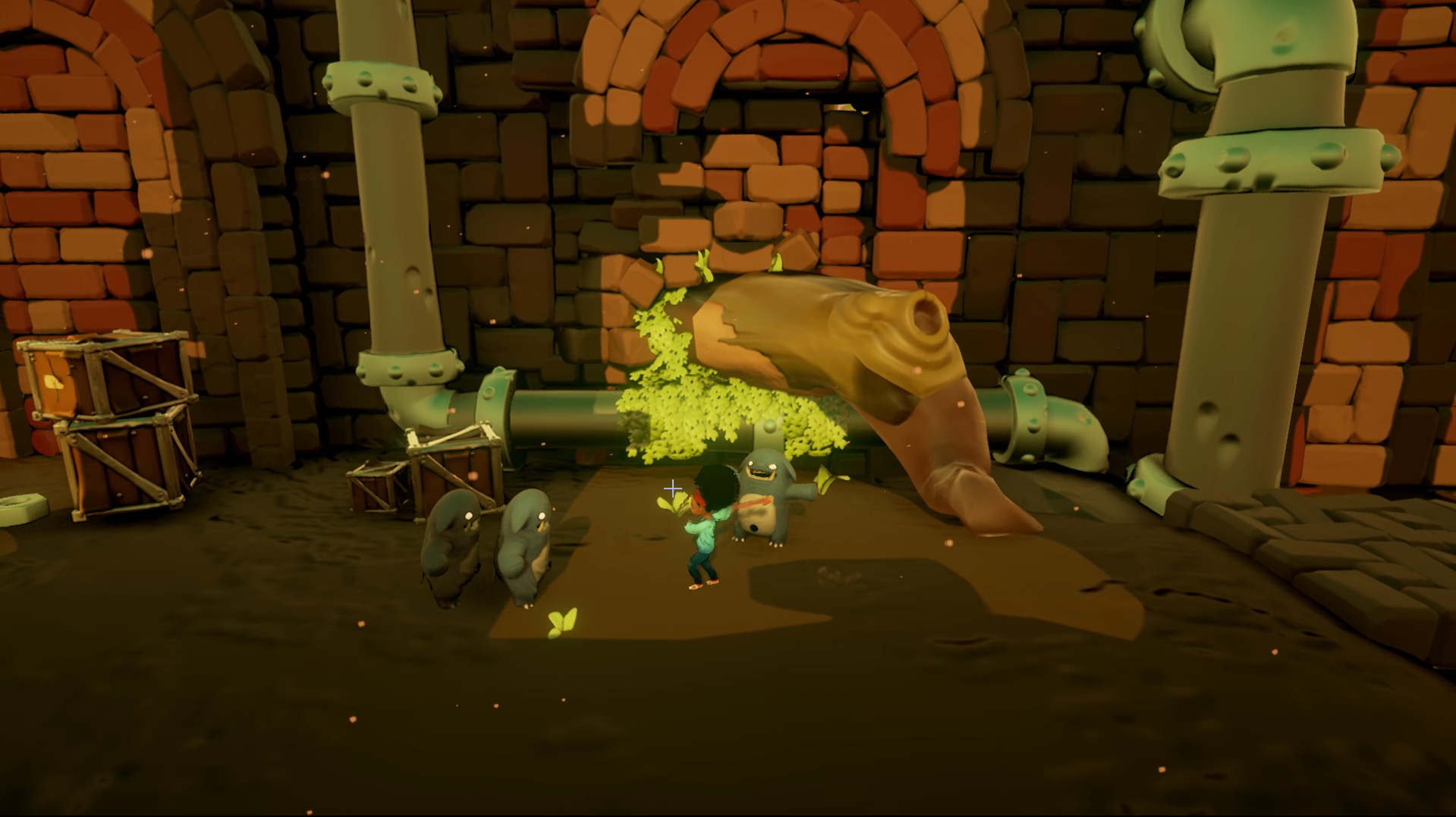 The mechanics of combat are fairly simple as the only weapons available to the player are a wooden sword and a bow. Left click swings the staff and right-click and hold aims an arrow, while releasing fires the arrow. The arrow can be charged up by holding it longer to do more damage. Enemies attack the player a couple at a time, in the movement plane with the rest of the onscreen enemies in the sidelines in either the foreground or background cheering on their buddies in battle against the outsider. As enemies are defeated the others outside of combat will join the fray until all foes are disposed of. There is not much in terms of variety of bad guys to fight, but there is enough to keep things interesting, from bomb toting bullies to hulking beasts that do area of effect damage.

The sound design for Blue Sheep is a great example of how well composed music aids in the story-telling aspects of a game and can really assist in the immersion of a player within the game world. Blue Sheep starts this early by incorporating flowing melodies into the menu, with a little piano tune playing with each click on a menu option or back button each adding to a sort of melody of interaction that makes adjusting something as simple as the game resolution a pleasing activity. Inside the game itself, the musical score captures the adventurous and dream-like aesthetic of the environment and continues to compliment the setting as the environments change throughout the game. Towards the later end of the game, the music does a wonderful job of helping to convey the feelings of the characters and elicit emotion form the player as well. In the environments themselves, little sounds such as the clinking of tiles underneath the outsider’s feet as she hops across rooftops assists in bringing life to the world inside the game. In addition, the game features high-quality voice acting for the narration and story elements of Blue Sheep. One unfortunate sound related issue in Blue Sheep is that the volume controls do not work all the time, as in certain portions of the game the volume was extremely high despite all sound levels being set at minimum. 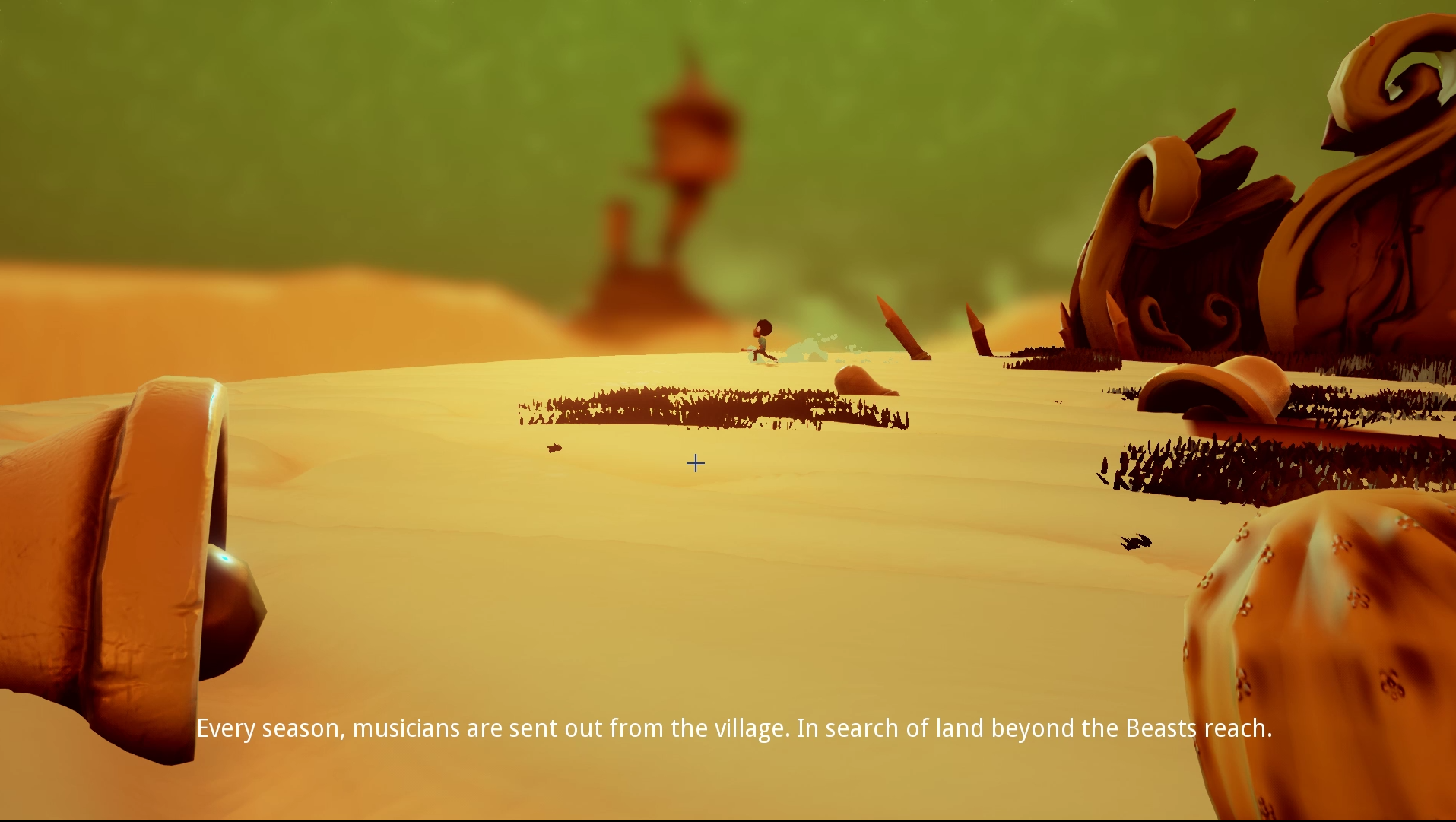 Visually, Blue Sheep utilizes a warm stylized art style that helps bring depth the game environment, from the lush green hills and trees in the beginning of the game to the stone temples later on. The environmental design is full of small details and accents that add to the beauty of the game, but does not distract from or obscure gameplay elements as the player is making their way through the game. The cinematic style camera following the character around the world of Blue Sheep was a design choice by Noetic as opposed to a traditional player tracking camera that is commonly used in games of this type. This was done to emphasize the narrative/story element of Blue Sheep while giving gameplay a movie-like feel as the outsider travels through the world. The character models used for the main characters and enemies are high-quality and unique in their design. The animations are smooth and varied, and when coupled with the fun and interesting character models, provided personality and a sense of life to each character.

At this point it is pertinent to share some background on the developers Gabriel Priske and Ryan Kratt. Gabriel always wanted to make games, teaching himself 3D art at age 13 and eventually using his talent as an environmental artist on Dungeon Defenders 2. Gabriel was diagnosed with a mood disorder that manifested in episodes of depression and anxiety. Ryan Kratt was suffering from heavy depression when he met Gabriel. Soon the two started hanging out together and connected over their shared emotional patterns. During this time, Gabriel suggested that Ryan should focus his efforts into something to help move past his problems as he had done to help overcome his own. Taking this advice, Ryan began learning how to program and moved in with Gabriel to focus even further on his endeavors in programming. Eventually the two came up with a concept for a game that would deal with many of the issues that they themselves dealt with. Through this project and personal work Ryan began to feel better, with support from Gabriel along the way. This project was Blue Sheep. Both Ryan and Gabriel hope that Blue Sheep can make a positive difference in the life of someone who plays the game.

Yes, the games combat gets repetitive after a while and can be frustrating at times, but that is not the point of Blue Sheep. It is a game whose purpose is to share a narrative and explain concepts like depression through metaphor, and in this regard it is spot on. By the end of the game I was choked up, sharing in the emotion that was being played out on screen and echoed by the musical score. This sadness was a good thing, as it was brought about by empathy for the characters and the understanding of the metaphors that had come to a point at the conclusion.

Blue Sheep is a game that is worth playing for the wonderful storytelling and the unique stylized aesthetic that it uses to do it.