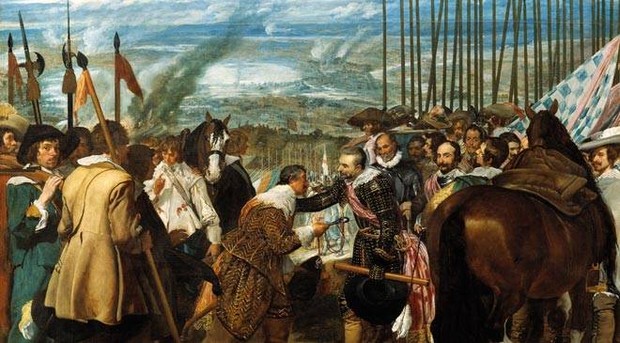 It seems that GamerGate (and Revolt, et al) has been going on for a long-time. More than a year and a half since the loose movement began, at least officially, Nintendo of America employee Alison Rapp has been terminated in the wake of – but apparently not because of – controversy over the localisation of Fire Emblem Fates. I am not overly familiar with the Fire Emblem furore (no great fan of the franchise), but I believe that dialogue which to Western ears was a bit rape-y and/or homophobic was cut from the localisation, which is apparently a highly SJW thing to do. Rapp was involved in the game’s marketing, but not, it seems, in the localisation or the decision to cut dialogue. However, she does have a history of being anti-harassment and generally a bit too SJW for some, and wrote a provocative essay whilst at college, and so was fair game for an extended campaign to dislodge her. In spite of Nintendo’s assurances of coincidence, it appears to have worked. Should she have been fired? Probably not. But to a great extent it was inevitable and uninteresting: Rapp was just another casualty in a complex struggle between two amorphous, equally unrelenting opposing forces. The nasty “culture war” ensnaring games culture is not a flash-in-the-pan. By looking at events in an appropriate comparative context, two things become clear: a) that almost everybody actively involved in these things is wrong, deceitful, and more than a little stupid, and b) it will probably never end.

My own personal view on the core issue – diversity and inclusion of women, and to an extent minorities – hasn’t changed since the blog I posted on D’Toid back in May 2013. In brief, the issue of poor representation is a by-product of laziness from triple AAA publishers, and symptomatic of their general creative poverty. That is about it: no wider framework of oppression, no feedback into ‘rape culture.’ It is not a coincidence that the concern over diversity and inclusion and whatever else you want to call it is rarely extended to indie games, which may or may not be good, but tend to rise or fall depending on the talents of those involved, and are less shackled by the performance pressures big budgets tend to entail. What does that make me? Probably a bit conventional. If we imagine a gaming culture political compass, Asterion’s view might register something like this. 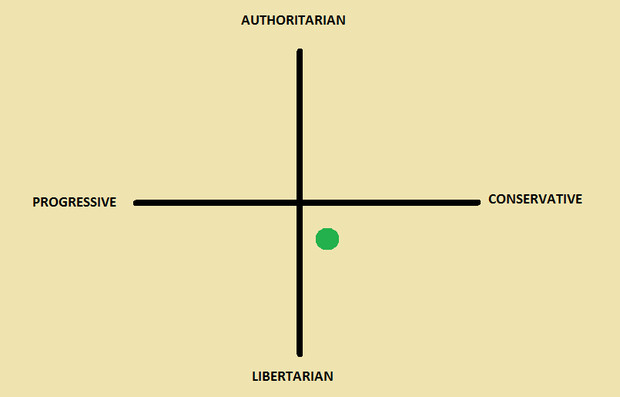 That is, if you will, my disclaimer. I am a little conservative and a little libertarian. I am also assuming I am a silent majoritarian: most gamers, I am willing to bet, are roughly like me. To put this green dot in context, let’s add another little doodle. 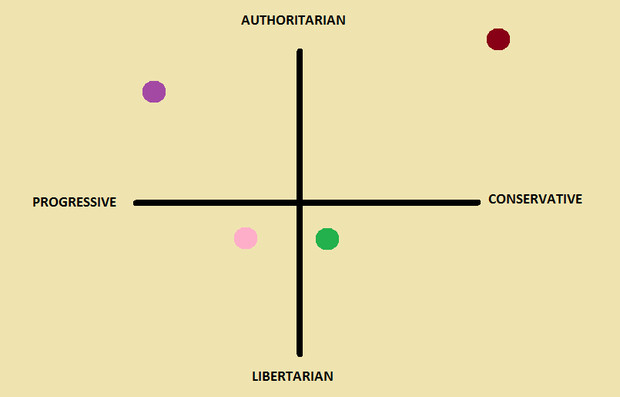 I am still there, at what looks like about (1,-1) if the axes were numbered. The pink dot at something like (-2, -1) is the typical games journo, who is generally a bit more progressive than the average player, but also more libertarian than not. And who, we might ask, are the dangerous characters on the other side of the graph? The purple dot is the typical SJW, and the maroon represents GamerGate. The SJW is rather progressive and rather authoritarian; GamerGate even more authoritarian, and very conservative. Enough with pictures. Let’s move on to the narrative.

Gaming culture, in its most quintessential form, has always had a bit of a problem with the fair sex. A prevalence of juvenile, insular, and defensive attitudes regarding inclusion and one’s gamer status, combined with visual cues being taken from the rather risqué traditions of Western high fantasy and Japanese anime/hentai have made given breed to some misogynistic gamers and some misogynistic games. Long before GamerGate, this worst tendency was manifested in a crude comic about Jade Raymond, then an exec at Ubisoft, in 2007. Reacting with childish cynicism to Raymond’s promotional work surrounding the first Assassin’s Creed, a comic began circulating depicting Raymond – young, female, and good-looking – granting sexual favours to a pair of textbook nerds. It was misogynistic, reductive, and crass—but in an odd way, it was also self-deprecating. Whilst highlighting Raymond as an exception, it also spoke to the insecurities of a certain type of gamer. Raymond was objectified, but the highly de-sexualised, nerdy-looking guys in the comic were also drawn to play up to cultural expectations, albeit vastly different ones. More women play games than did in 2007, but the teenage-misogynistic cultural mores still exist in the gaming community. This is clearly a problem. It is also clearly the wellspring whence GamerGate, and its clones, sprung—the movement has deep, if not particularly venerable, roots.

Anita Sarkeesian’s “Tropes vs Women in Video Games”, which began in 2013, was a watershed moment for all the wrong reasons. It marked definitively the moment that the activist tradition entered the gamer’s cultural sphere. A locking of horns was always inevitable, since Sarkeesian, and those who have followed in her footsteps, always intended to tackle the problematic current in gamer culture I highlighted above. Whilst acknowledging her seismic influence, I cannot endorse Sarkeesian in any way. She epitomises not only a new type of critical presence, but also all of its flaws. Her videos combine the mind-numbingly obvious with the flat out wrong, and have been known to twist what is in order to make points about what should be. The people detractors refer to as SJWs have identified a real problem, but like Sarkeesian they tend to exaggerate the magnitude because, after all, a bigger problem makes for a bigger victim. But these are only incidental concerns: what is really problematic about the activist approach is the content of, and language used to express, their solution.

The SJW is defined primarily by a willingness to resort to cant, just as the GamerGater resorts to abuse. Threats of violence and obscene insults are instantly nasty and easily condemned. Condemning the use of cant is much harder to do, and generally beyond the intellectual capacity of most GamerGaters. Nevertheless, condemn it we must. Prominent examples of cant which have gained currency in the last few years include such nebulous concepts as “rape culture”, “micro-aggression”, “safe space” and “mansplaining”, to name but a few. All of the aforementioned are sufficiently vague that they can be wheeled out virtually at will, and in spite of a general semantic emptiness, their connotations are well understood. Without exception they are accusatory, and they are used by their proponents in exactly the same way that GamerGaters use threats—to cajole, to silence, and to end debate wherever it flourishes. The use of cant is just as counterproductive, albeit less obviously wrong-headed, as the harassment of GamerGate.

The language of cant deployed by the SJW feeds into the other glaring issue with activism in gamer culture: namely, how are the core demands satisfied? Compare the demands of activist gamers to activist investors, and a stark contrast emerges. An activist investor will generally make concrete demands – they will state that a given company is undervalued in the region of a certain number of billions of dollars, will advocate a concrete plan intended to realise this, and usually seek a stated number of seats on the company’s board of directors. By contrast, the activist gamer offers solutions of a very general sort. More minorities and women portrayed in better ways is more or less the substance of every demand. Fine, to an extent, except that what is better is hard to pin down and how many more is a question nobody seems able to answer. Precisely because the solution is vague, the option of moving the goalposts always remains. In 1967, African-American actor Sidney Poitier starred in films dealing explicitly, and deftly, with race relations in America – films like Guess Who’s Coming to Dinner and In the Heat of the Night. They were good films but more importantly socio-cultural landmarks; from the point of view of those who had observed Hollywood in the 1950s, at the height of McCarthyism, they were nothing short of revolutionary. And yet almost half a century later we are still searching for substantive progress in diversity, inclusion, and so on in the film industry. As we were recently reminded by #OscarsSoWhite, a new generation with different standards is always ready to raise (or flat out change) the bar. I can see no reason why the games industry should escape this circular trap if it starts designing inclusion policies, such as the ethnic minority quotas already commonplace in the British TV industry.

Neither the SJW nor the GamerGater can be beaten. The SJW uses obscure language to make impossibly vague demands which will never truly be satisfied. Consider for instance the removal of the boob slider from Xenoblade Chronicles X: does it prevent players from engaging in crass H-cup style objectification, or does it rob female players of the agency personalisation options grant? Since all our judgements can only be value judgements, it is impossible to say. The nature of much SJW activism is predicating statements of fact on such value judgements. We will spend a year removing boob sliders and the next including them if we follow the whims of the SJW community. Similarly, the GamerGater will not go away so long as women deign to play video-games. Although the increasingly vocal SJW presence in gaming has given rise to GamerGate, the underlying attitudes which gave rise to such horrendous behaviour are old. GamerGate has taken these cultural mores and found innovative new ways of expressing them in a repulsive manner.

Since the attacks of GamerGate only make the SJW victim narrative more credible, and the supercilious cant of the SJW sees the GamerGater feel increasingly cornered and validates claims of an attempt to censor games, gaming culture appears to be trapped in a centrifuge where all the major actors are, bluntly, wrong. This is the new normal, and there is no end in sight. Every time Anita Sarkeesian delivers a droning lecture, 4chan aficionados will fire another volley of incendiary tweets. And so on and so on, forever and ever.