Why Do I Like This: Final Fantasy Record Keeper

Why Do I Like This is a series that takes a look at games I know are bad/flawed/really not all that good, but still tickle the hell out of me nonetheless. Inherently different from ”guilty pleasures,” these are games I have no shame in playing, but feel rightfully wrong about liking due to their very nature. I’ll analyze the negative features of the game and try to rationalize why after all evidence telling me I shouldn’t, I still like it. After all, nobody’s perfect.

Mobile gaming is oddly divisive: On one hand I totally understand why lifelong gamers have a negative view of the platform (what with developers often cranking out FTP microtransaction-fests that effectively do nothing but limit the player), but on the other I feel like it’s sort of silly and counterintuitive to hate something simply because it’s available to play on your phone. Dedicated mobile gaming systems like 3DS and Vita aren’t maligned for their portable wares, so why should your cell phone? I feel like mobile gaming is missing out on a huge opportunity, but there’s still a lot of good stuff out there.

One of those mobile games I think is good is Final Fantasy Record Keeper. My love of Final Fantasy is pretty well-documented, so something like this is pretty much right up my alley. The game starts with Dr. Mog telling an apprentice at his library that the records holding the information of the Final Fantasy universe have been corrupted by darkness. From here, it’s up to you, the gamer, to go into the records and play out memorable (some very much so, others hardly) scenes from the main series of games to restore their information, thus saving those realms. You start out with the apprentice character and gradually earn generic job classes (such as White Mage, Summoner, Spellblade) to add to your team – eventually leading to unlocking characters from the games themselves. Along with new characters, you can obtain and upgrade new weapons and craft new abilities from orbs collected through gameplay, turning the game into sort of a Final Fantasy-lite experience. The main draw of the game is, of course, playing out scenes from your favorite Final Fantasy games with characters from other iterations (nothing gets me harder than seeing Beatrix put Jenova down once and for all!). 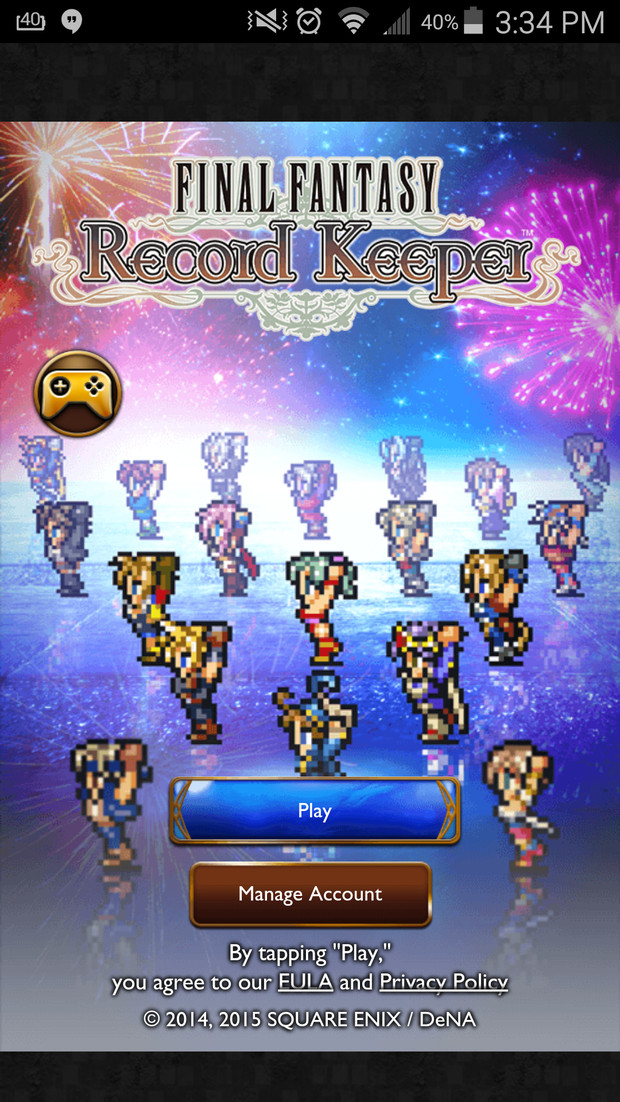 They're almost as excited as I am to play!

Despite the short-lived thrill of mixing the streams of popular (and unpopular WTF Hope??) characters, there are some major flaws in the game that prevent it from transcending its mobile game stigma. First and foremost on this list is the stamina feature, which is used in basically every mobile game ever. Entering any dungeon in the game costs stamina, which replenishes at a rate of 1 point every 3 minutes. This isn’t a huge problem with some of the lower-level dungeons that only require a couple points of stamina; however, as you progress, the dungeons require more and more stamina to play, which to a time-conscious mind is absolutely frustrating. Every time I see a dungeon requiring 20 stamina to play (some of which offer little by means of EXP or rewards), I can’t help but think to myself, “Well, there’s a full hour of waiting for stamina to refill.” There are points wherein I play six dungeons and use up every bit of stamina I have, thus requiring me to wait six hours to have a fully replenished supply. No bueno.

Another downfall is that while it is a free-to-play game, there are definitely elements of it built around getting the player to spend money (this is a mobile title – of course there are microtransactions!). Thus, the weapons and skills you earn through gameplay are rarely worth using once you progress beyond a certain point, forcing you to use an in-game form of currency (Mythril, naturally) to enter a random drawing of weapons, with very little chance of obtaining the best ones. Since Mythril is semi-finite (and it takes 50 for a drawing of 11 weapons [again, with no guarantee for higher levels]) once you’re out, you’re basically stuck with what you have. Add to this that Mythril buys higher capacity for totals weapons and abilities (and you’ll need it), and you’ve got a game that doesn’t force you to pay money, but it sure makes things easier.

While the combat sets out to mimic a full-fledged FF title, it ultimately falls short. All exploration is gone, so that while battle areas may be modeled after settings and scenes from the games, you access these areas by going through menus. As for combat, each character automatically has the Attack and Defend commands, but can only add two additional equipable commands. This means that outside of Attack and a Limit Break-esque attack, each character can only do two other things. Further, these abilities have a set amount of times you can use them per dungeon (meaning you can only use Curaga up to 12 times per dungeon, which usually isn’t an issue, but presents difficulties during tougher areas and over-powered bosses). And since no usable items of any kind exist, you can’t heal during/between fights in a dungeon (most of which contain three levels with three rounds of enemies each), you’re at the mercy of the limited-use healing abilities and random drops of Potions that instantly replenish a fraction of your party’s HP. 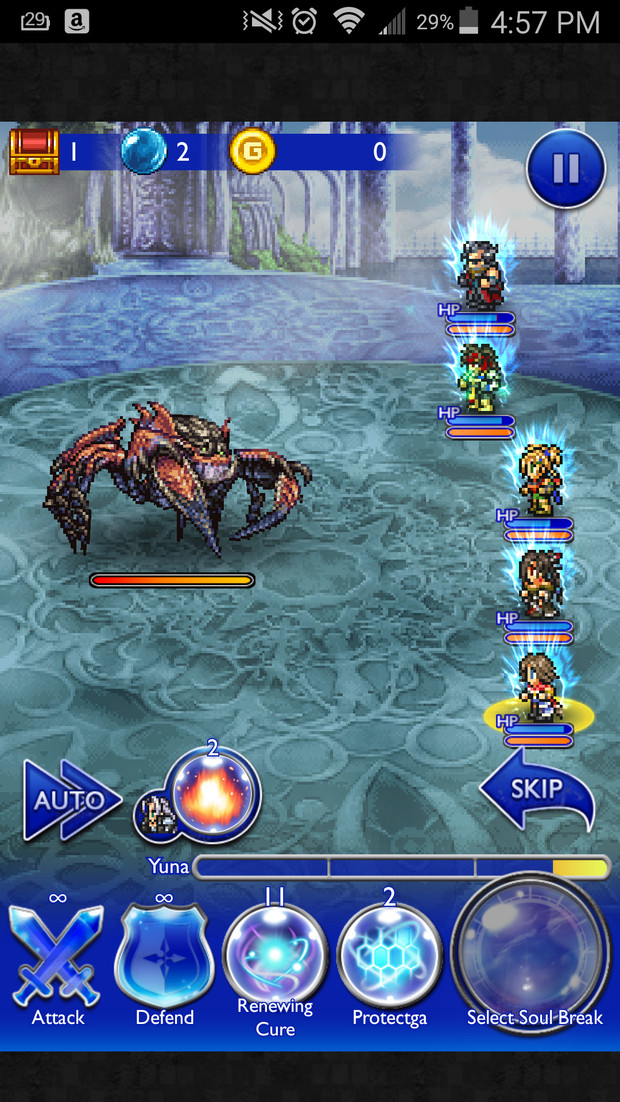 A question every Final Fantasy fan asks themselves at some point or another: "Why the fuck am I fighting a giant, sentient crab?"

AND OH MY GOD WHY DOES IT REQUIRE YOU TO BE CONNECTED TO THE INTERNET TO PLAY?!

So, it’s essentially an online-only mobile game (complete with the trappings of stamina points for playing and microtransactions) that waters down the ATB combat of the Final Fantasy series and strips away all exploration, making it a slightly underwhelming experience. 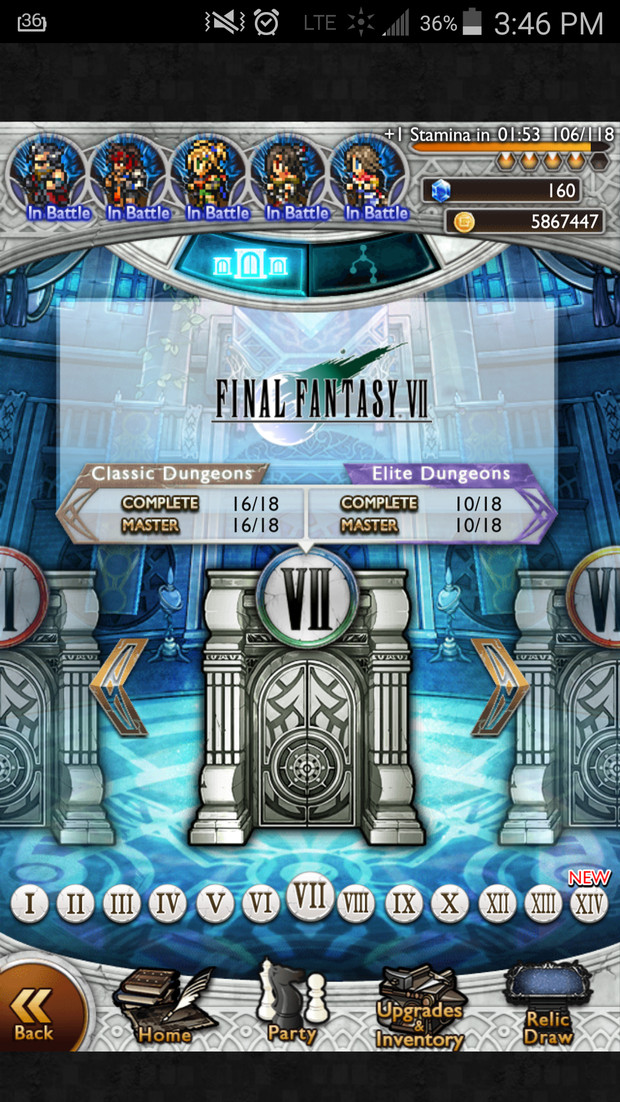 All of your favorite mainline Final Fantasy games! Also, XIII!

For starters, the game is pleasantly shallow. It recreates the middle 57 hours of the game in which most FF fans spend grinding their party to level them up for the challenges ahead, without delving too deeply into the minutiae of the series on the whole. This makes it almost perfectly suited to the mobile platform, as you can just pick up and do some battles in between tasks at work, or hiding from your boss on a toilet on a different floor. What it effectively boils down to is endlessly leveling up your characters and equipment, something that’s always been cathartic to me and a huge draw to the series. So long as you’re not too bored and binge, the stamina (especially after you’ve been playing a while, since you can increase it by beating dungeons) is generally less of a hindrance than it otherwise could be, and should help to pace your playing throughout the day.

Another nice little positive is while paying for in-game currency will definitely give you an advantage, the microtransactions are almost entirely hidden behind the scenes of the game. I’ve never even come close to the menu in which you pay for stuff (not even by accident, as so often occurs in this type of game) as it takes a pretty concerted effort to get to those options. This is a huge sigh of relief after the micro-shitstorm that was FF:ATB.

And despite many of the more focused parts of the main series’ combat being mainly reduced, there’s still a fair amount of strategy to be had. Elemental weaknesses and buffs/debuffs still exist, and using characters/equipment that match the realm in which you’re playing gives both a boost in level and effectiveness (i.e. Cloud in a FFVII level using the Buster Sword boosts both Cloud’s stats and the damage output of the sword). Because of this, higher-level equipment can often make a realm too easy to master, as weapons become incredibly powerful and armor mitigates so much damage. For me, personally, I just happen to have a lot of high-level FFX gear, so those realms are usually quite easy to beat. Not paying for the chance to get better gear oddly makes the game more challenging as you don’t waltz through the majority of the dungeons. 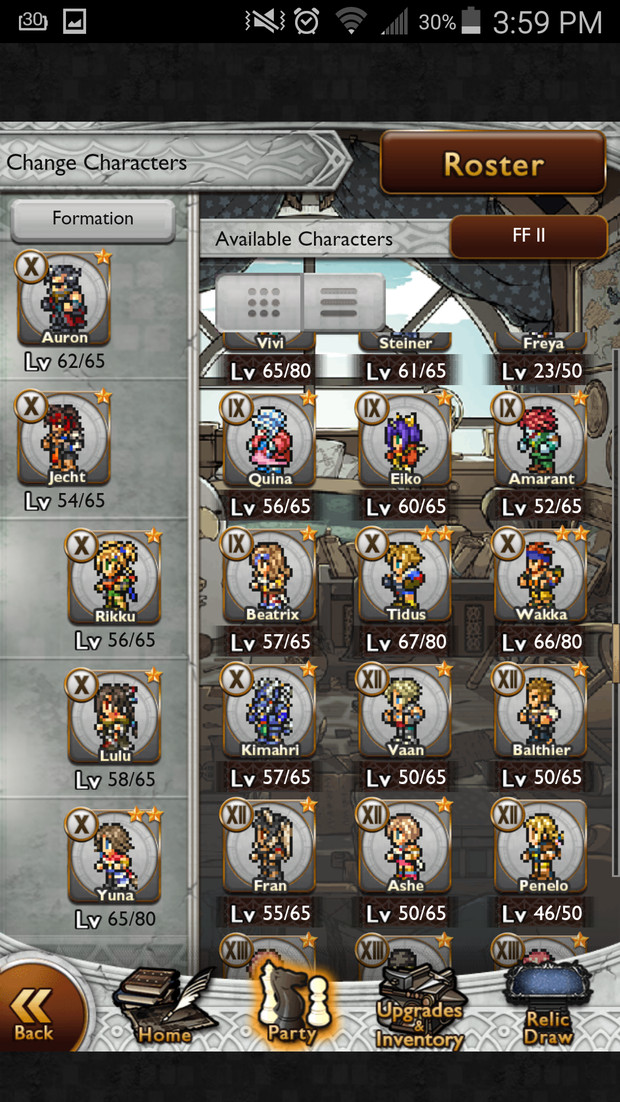 Any game where you can make a team of Kimahri, Freya, Red XIII, Quina, and Beatrix is alright in my book.

All in all, this is a prime example of a game I know is deeply flawed and may not be entirely worth all the time I’ve put into it (and I’ve been playing since damn-near launch a year ago), I still really, really enjoy it. It scratches that RPG and Final Fantasy itch on the go, and like stated earlier, there’s nothing better than taking my one true love, Beatrix, through the realms of FF I-XIII and kicking all of their bosses’ asses with her. It’s pathetic and fun. Go play it!

Have you played FFRK? Have you been strangely addicted to it the past year like I have? Why does my urine smell like the Golden Corral Chocolate Waterfall? Let me know in the comments below!