Who do you play as?

8:33 PM on 07.11.2007 (server time)    0
I don't mean which character class do you select to represent you. I'm sure we would all agree that rangers outclass brain-damaged fighters and effete magic users.

No, what I mean is when you play, who are you trying to please?

I'll explain: When I was 13, I first played Wolfenstein 3D. It was a life-altering experience, one I often pursued into the wee hours of the morning. I would have dreams where I would hear those iron Nazi cell doors clanging shut off in the distance. Then onto Doom, Duke Nukem 3D, Quake, and Unreal. And the sequels to those games.

Now, in my late 20s, I still play games quite a bit. But I rarely play FPS games, or traditional action or shooting games. Instead I play what the professionals refer to as "kiddy games." By this, I mean Animal Crossing, Elite Beat Agents, NSMB, etc. I don't think there's any coincidence that those are all Nintendo games. And I think this is because of a fundamental shift of who I am playing as when I play a game.

When I was younger, I wanted to play games where I could act as a hypothetical kick-ass adult would. A real man's man, if you will, ripping phonebooks in half with my cock. Now that I am (arguably) an adult, I tend to play games that remind me of the child I used to be. Hence a lot of Nintendo games now, even though I grew up mostly on PC games.

This is not to say that that's the way it should be. Lots of people grow up, and they still like to smash things good in games, or manage resources, or explore a fantasy world. In some ways, I think the "Know Your Gamer" guides on Dtoid reflect the tendency we have to play with our identities as we play games.

When we hit the start button, we adopt a personality just like we do in any online community. On Dtoid, I play as MaxVest. He says lots of things I wouldn't bother to say, and he cares less about sounding condescending than I do. I hope he's not too much of an asshat. But if he is, I could just bury him and start over with a new character. Sure, there would be some loss, but just like in a game, there wouldn't be much.

Perhaps that is the greatest possibility in this new age: the possibility for endless, low-cost, self-reinvention. Of course all possibilities come with costs (if people can freely reinvent themselves, why do so many choose the "jackass" motif?? Just to try it out?), but that's a rant for another time.
#Community
Login to vote this up! 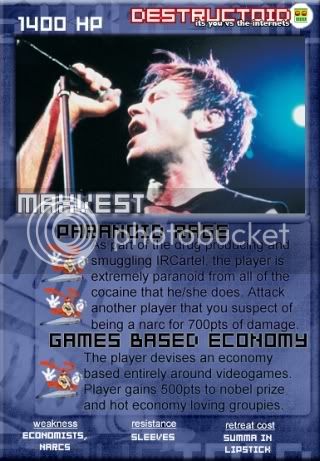