In honor of Pikmin 3's new "Nintendo Selects" status, I thought I'd share the review of Pikmin 3 that I wrote back when the game came out in 2013.

Every so often, you play a game that reminds you why you love video games in the first place. Pikmin 3 is one of those games. Brimming with Nintendo magic, Pikmin 3 instills a sense of wonder and discovery into every moment that few games today can achieve. If you own a Wii U, you're going to want this game. If you don't, well maybe now's the time to buy one.

Pikmin 2 was released so long ago now (almost 10 years) that this game will be the introduction to the series for many players. Lucky for them, it happens to be the best installment. The original game saw Olimar crash landing on the Pikmin planet (now called PNF-404, heh) with the objective of retrieving his missing ship parts in 30 days. The strict time limit always turned me off, even though I enjoyed the gameplay. In the second game, Olimar teamed up with his co-worker Louie to travel to PNF-404 in search of treasure to recover his company's debt. There was no overarching time limit at all in this game, but the gameplay changed significantly. The focus here was on delving into underground caverns in a series of challenge levels with no time limits. You could take your squad of up to 100 pikmin through multiple sublevels of enemies, but could not recover any of them once underground. Here were the only places you could find purple and white pikmin, which were oddly necessary for some above-ground puzzles, and the majority of the game's treasure. Pikmin 3 forgoes the spelunking of the second game while keeping the relaxed pacing, and combines it with the exploration in from the first game. The result is the perfect balance, and the Pikmin game I've always wanted.

In Pikmin 3, you play as a squad of explorers from Koppai who are sent into space to find food for their starving home planet. The main objective is to collect fruit, which is turned into juice at the end of the day. Each night, your squad will consume one bottle and you can continue to play as long as you have juice remaining. In this way, you can extend your game up to 99 days, which is way more than anybody will probably need. I took my sweet time with things and only managed to reach day 50. Anyway, though the plot may seem simplistic, the narrative is a bit more involved than it first lets on. Veterans of the series, especially, will find a lot to like about the game's story. 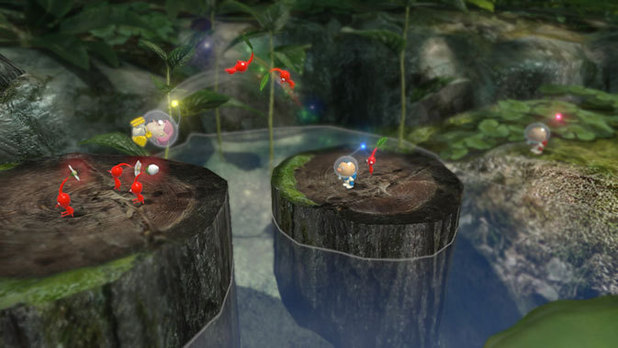 At this point you might be saying, "Okay, so it sounds like it's just more of the same but structured differently." Well, yes and no. At its core, Pikmin 3 plays exactly the same. There are very few mechanical changes in the formula. Instead, it really is more about refinement. This game adds a third controllable captain, and adds the ability to throw another captain which makes for new kinds of puzzles. The ability to make your pikmin "march" with the right stick is gone, and is replaced with a lock-on ability that lets your pikmin charge at the target all at once, which is arguably better. The game also has camera control now if you're using a controller with two sticks. I started out on the gamepad, but moved to the Wii remote plus after I realized how much better aiming is that way. Considering the camera couldn't be manipulated in previous games, I didn't miss it at all.

Obviously, the big draw of Pikmin are the pikmin themselves. The game adds two new types– rock and flying– replacing purple and white pikmin from the last game, who are only available in the challenge and battle modes this time. While I miss purples and whites, these new types lead to more interesting gameplay than their old counterparts. Additionally, the game's old pikmin types have new abilities this time around. It breaks down like this:

Of course, each type also has disadvantages: each color only has one kind of resistance, rock pikmin can't grab on to enemies like the other types and will headbutt enemies instead, and you typically don't want to send the weak flying pikmin into battle unless it's against a flying foe. It's unfortunate that the purple and white pikmin are relegated to secondary modes only, as I do miss their abilities in the campaign, though I suppose seven types would be a lot to manage. On the plus side, the new types have their own onion so they're easily obtained, whereas in purple and white pikmin in the second game could only be obtained underground by throwing another colored pikmin into a special flower. And this time, all pikmin are stored in one mega-onion! 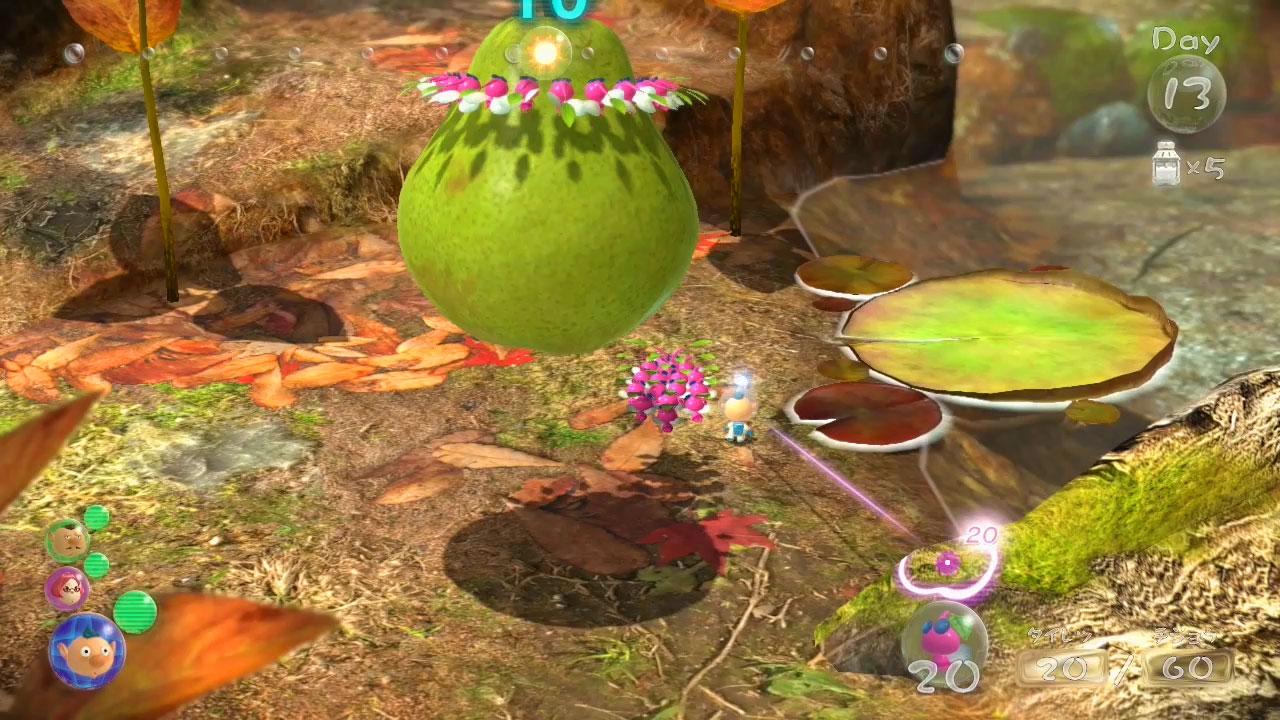 These simple changes in the pikmin and captains lead to changes in level design resulting in sweeping improvements across the board. There's still only five stages, but they're much larger and more involved before. The gamepad, though not necessary, displays a map that gives you an overhead view of the area as well as fruit locations. At first, I was disappointed in the game for not letting me discover the fruit on my own, but I soon realized that the challenge came not in finding the fruit but in how to obtain it. You can pause the game at any time for an overhead view and send a pikmin team to to a specific location automatically. This allows you to multitask with up to three teams doing different jobs at once. And for those of you who did want to find those fruit, don't worry because there's plenty of hidden goodies to find. The game rewards you with tons of optional extras or challenging battles by straying from the path. I thought I did a pretty thorough job exploring and still didn't find everything there was in the game. Unfortunately, if you miss any goodies, it's not much fun going back for hidden stuff once you collect all the fruit and complete all the puzzles in an area. Take your time! There's no need to rush through this game, and you'll enjoy it more if you don't.

Adding to that enjoyment and sense of immersion are the audio and visual design. As you would expect, this game looks and sounds lightyears better than the older entries. The music and sound effects stood out to me in particular as being the most improved. The tunes this time were a noticeable improvement to me, with much more memorable melodies. There are also tons and tons of unique and quirky sounds in this game. The characters all speak and adorable gibberish language, while enemies, pikmin, and the environment itself all react realistically with the action.  Pikmin 3 is definitely a game to play in surround sound. The game also has a sense of scale like never before thanks to the much more detailed and realistic environments. There is a pretty beautiful depth-of-field effect that makes giant leaves and the like blurry in the foreground. The combination of excellent visual and sound design had me really feeling like I was waging tiny war!

Pikmin 3 also has a challenge mode and a multiplayer battle mode. I don't know if anybody else played the battle mode in Pikmin 2 (it was fun!) but I'm glad it's back here. In it, you must send your pikmin to collect objects on your bingo card and make a match before your opponent does. The powerup cherries return, which allow you to thwart your opponent's progress with devastating attacks. Optionally, you can enable the "victory macaroon" which will give you an instant win if captured. This mode really is a lot of fun and should't be overlooked as "tacked-on" multiplayer. The challenge modes are unfortunately lacking in content, as there are only a few levels. (NOTE: In the years since the game released, there's now plenty of DLC for this mode.) These are timed modes where you must collect treasure or defeat a certain number of enemies to get ranked on global leaderboards. Finally, there is a boss rush mode that lets you fight all the bosses in order. Each mode can be played with friends locally. 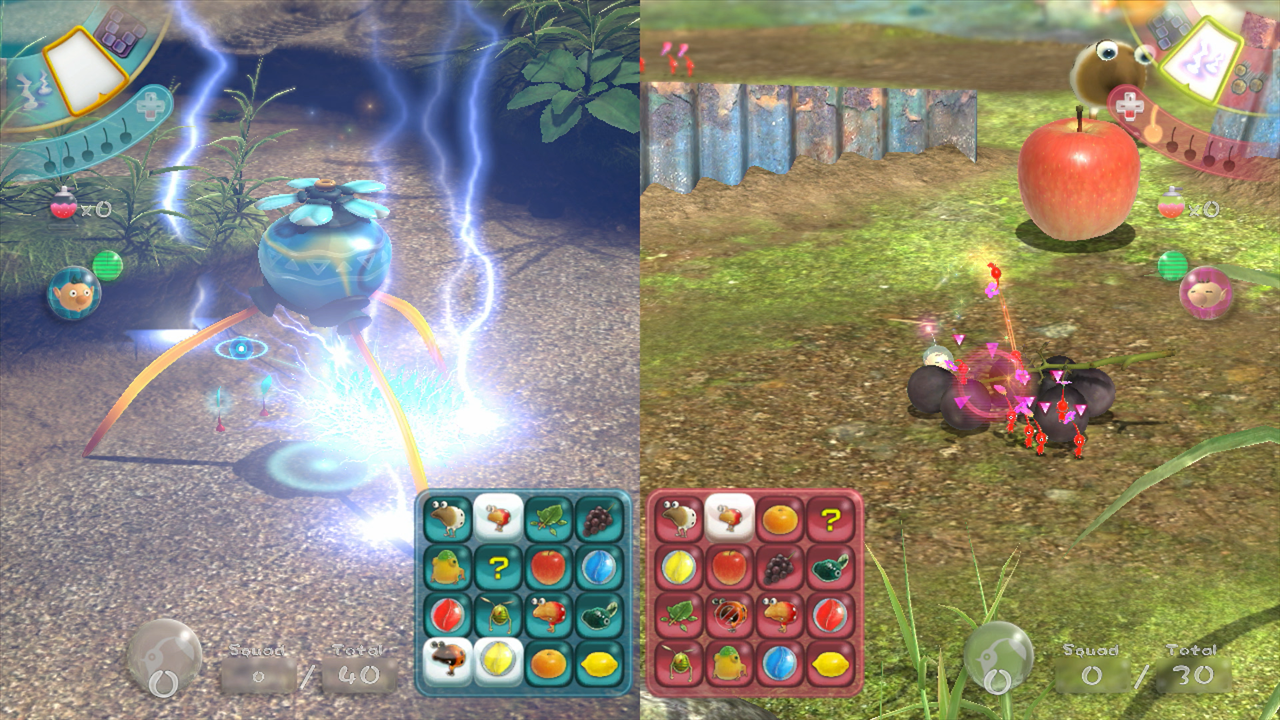 Overall, the Pikmin 3 experience is all about the little things. The new omni-onion, the way the music changes when it's raining, the way the color of juice blends when you mix two fruits together, the way the enemy damage carries over to the next day, the way your characters interact based on what you did that day. The game is full of little refinements that makes it the perfect entry point for newcomers and the perfect followup for veterans. The one and only gripe I have is that you can't send your pikmin to charge a target by type. You still have to dismiss your squad and call the particular color you want to you. But I'm more than willing to overlook this because the rest of the game is just so pleasant. Plus, you can just select a type and throw them anyway, even if it's more tedious.

#pikmin3
Login to vote this up!