Last year, mobile developer Masukachi K.K. brought us a clicker game about polygamy called Ten Billion Wives. The aim of the game was to accumulate as many waifus as possible by clicking. There were maid waifus, loli waifus, tsundere waifus... you get the idea. It was a one note gag game and it wasn't very good.

Now Masukachi is back with a new clicker called Ultimate Kept Man Life and it goes in the other direction in every way you could imagine. 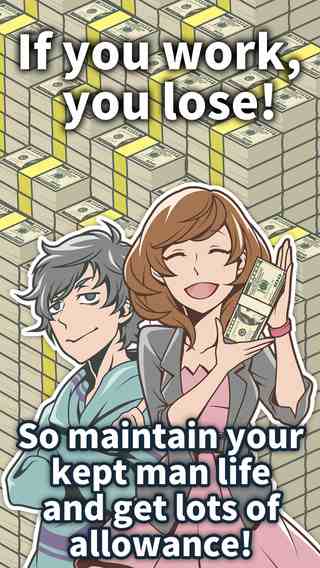 For a start, UKML reduces you to one single waifu with a rich daddy. The idea of the game is to continue to receive your allowance from her without actually doing any work, while appearing to be enough use for her dad not to throw you out.

The joke is that you start off cleaning the house and doing the laundry. Before long you're learning to drive, building a new house for her, and generally doing more work to preserve your slacker lifestyle than you would actually be doing at a desk job. That's the second difference: UKML is actually funny, and the plot is advanced by a dialogue scene every time you gain a new resource.

The third difference is that UKML understands that a clicker game has to actually go somewhere. I'm a few resources from the end of the game, and me and the waifu are in space and there are portals. Like I said last week - say what you like about the Japanese, they commit to the joke and this one escalates quickly.

The fourth thing that sets UKML apart from the pack is that it actually has a unique system of leveling up. The player has up to three actions which are gradually restored by a life meter, and these can be used for slacking off. The game's risk/reward system, however, means that the better the rewards for an activity, the greater the danger of being caught by her father (if dear old dad in law catches you relaxing, he confiscates all your allowance).

And finally: Perhaps the most surprising way in which UKML distinguishes itself is the way in which Masukachi has gone from making a game which was nakedly misogynistic to one which... well, I wouldn't call Kept Man feminist, but it certainly sends all parties up with equal aplomb. Maybe it is feminist. Maybe it has a stealth anti-feminist agenda. SJWs censored my clicker games.

It sure as shit isn't going to set the world on fire, but if you've hungry for more incremental action having wrung the last bits of enjoyment out of Cookie Clicker, Adventure Capitalist, A Dark Room, Clicker Heroes and the other staples of the genre, I reckon Ultimate Kept Man Life will be just what you need to keep you occupied for a few more days.

And it's certainly better than Tap My Fucking Katamari. Jesus wept.

#ultimatekeptmanlife
Login to vote this up!