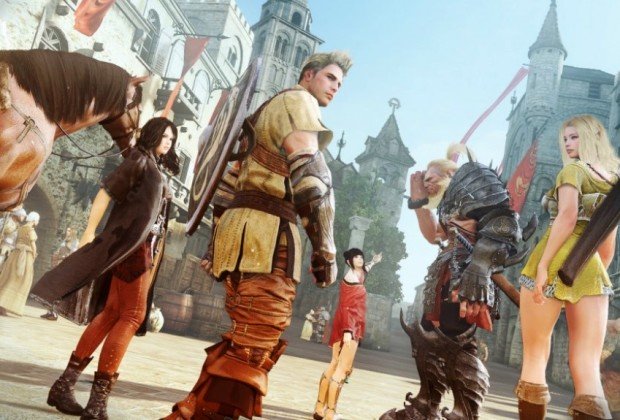 With beta's closed,and character creations as well as name reservations being put in place,we move close to the release day of Black Desert Online,a hot new MMO title that many have had their eyes on for some time due to its remarkable in-depth character customization which aims to make everyone's character unique.So far it has gotten positive feedback,though for the most part it is still as many call a grind festival,or a chore in other words.I don't mind grind fests too much,but if it starts to become a mind numbing dull play after only a couple of hours,its hard to say what that would do for other players who are in it for the gameplay.Right now,with pre-orders still being taken,there are exclusives for reservations,such as a  96 hour head-start before game day launch,skins,pets,mounts,etc,as well as name holding,so if your looking to take the name "TheHotStuff",you better get on it!Currently,as is,the head starts are as follows for pre-order packages :

For me,I have yet to pre-order,since I am still on the fence,especiallysince its being called a grind fest.I know how Korean MMO's usually work,so I'll have to wait and see.But I am excited to see all the unique characters that other players will create!That way everyone can fulfill their very own little role playing world of Final Fantasy or whatever we kids dream about doing to pass the time.In other news,there was a recent interview with the developer Pearl Abyss! Interview as follows courtesy of Black Desert Online Forums :

Will there be any male counterparts for Ranger, Sorceress, Valkyrie, and Tamer?

"It is hard to give a concrete answer to this matter because we are always trying our best to create a truly fun and innovative character, rather than copying an existing one, with a sex change. Creating the same class, but a different gender, takes almost the same amount of resources as creating a completely new class. This has changed the overall direction of class development towards creating new classes, which will provide an entirely new experience for players. Currently, there is no plan to create a male version of Ranger, Sorcerer and Tamer. We might however provide a counterpart that offers a similar look and feel such as Valkyrie vs. Warrior with slight adjustments to fit its nature."

Are there any plans to add more races? If yes, can you hint any?

"Race selection is heavily influenced by user preference, and that's why we'd like to be more cautious about creating a new one. We are, however, planning to add some new races. Realistically, it will be either from an existing in-game race, or something that we think might be fun for players.  We're thinking about adding a Shai race, for example, as a playable character, but it is still undecided which race should be developed first."

Are there any plans to add instance based dungeons and or raids for end game PVE content?

" Adventures and fierce guild wars in Black Desert are strongly established on an open-world system. Some special content might need to utilize an instance dungeon system, but we are not going to add a repetitive instanced dungeon, where the sole purpose is getting rewards.  Guild- and party-centric raids are already implemented in the game now, and we are developing more advanced kind of raid.

Are there any plans to do epic quest lines for an in game reward. I.E. Extremely difficult quest lines that could take month+ to complete. Rewards could be unique high end weapons that have special characteristics, stats, or an extremely unique look.

"No matter how hard a quest is, it can never deliver the same level of achievement or anticipation once it is cleared or a walkthrough is published. Most of the quests in the beginning stages of the game are simple and guiding, but as the player proceeds toward a later stage of the game, such as Valencia, desert and maritime quests demand long-distance travel and intense adventure. A quest in Black Desert should be an extension of the exploration of the in-game region, and can also assist players by making the exploration more convenient or helping with character growth.  However, we'd like to state that we do not prefer a type of quest that players feel obliged to complete, in order to become stronger or to gain rewards. Players should play freely and naturally in the game, and it is never fun to be pressed into doing something to get rewards. We do plan to add some difficult quests, but the estimated time of arrival is still not set."

For more of the interview questions ; http://forum.blackdesertonline...

Well!It looks like things are going to looking good for this game as far as content wise goes!But that's all MMO games most of the time!But we'l see how long it lasts if the gameplay doesn't live up to it's hype!For now lets all get our lotions ready,our Carp Tunnels in check,and get ready to grind levels!I know I'll be busy beautifying my future waifu!Going to be the best waifu!But keep it on the down low,ya' know!

Black Desert Online is currently scheduled for release March 03 , 2016  / Their will be a 4 hour maintenance during said time starting at 08:00 UTC .

Moelarkey evolved from Moe,and lives in the fantasy side of everyones dreams.It's said to roam the plains of popcorn fields and scurries by the oceans of HIC Fruit Punch.But if you see the Moelarkey,don't look away,it'll make you its prey!And remember,a beer at your bed side every night keeps the Moe bug from getting a bite!

Has a fear of Nekro and Nathan's eye fetish stash and a love for Cinnabon creamer. ♥