Firewatch is - a breath of fresh air

Note: If you'd like a rather creepy video version of this verbose review, check this out:

Firewatch is a videogame developed by Campo Santo for the PC and PS4, released February 2016.

Sometimes you‚Äôre going for a walk in the countryside; you‚Äôre relaxed, making your own path, looking at some flowers, a weird rock formation, the way the dusk light shines on the leaves, and then you realize it‚Äôs starting to get dark and cold and you should probably get back soon. You keep walking for a bit, but once you realize the sun has set, you turn around and swiftly retread your steps. It won‚Äôt be The End Of The World if it gets too dark: Your phone is fully charged and it has a flashlight app, but still, you hurry home and when you get there, you feel slightly relieved. There is an intrigue to simply being in the wild, a sort of instinctive awareness of one‚Äôs insignificance. It doesn‚Äôt need much; a strange shadow in low light, a noise whose origin you can‚Äôt see or imagine, or just your own scale, ridiculed in contrast with a wonder of nature.

Firewatch puts you in the shoes, hands and eyes of Henry, a man who volunteers to work as fire lookout in the National Park of Yellowstone, Wyoming. It‚Äôs a thankless, lonely job, exactly what Henry is looking for. We know this thanks to the choose-your-own-adventure story at the beginning of the game. The player is given a short recap of Henry‚Äôs life so far, and the chance to make a few choices about his past. This is a nice touch, since it gives the player some agency not only over Henry‚Äôs actions during this fire lookout adventure, but also about who he is as a person. These intimate details about him linger on in one‚Äôs mind throughout the experience, encouraging an empathetic roleplay approach to the player‚Äôs actions and partly subduing this game reviewer‚Äôs tendency to break and test the limits of the virtual world. 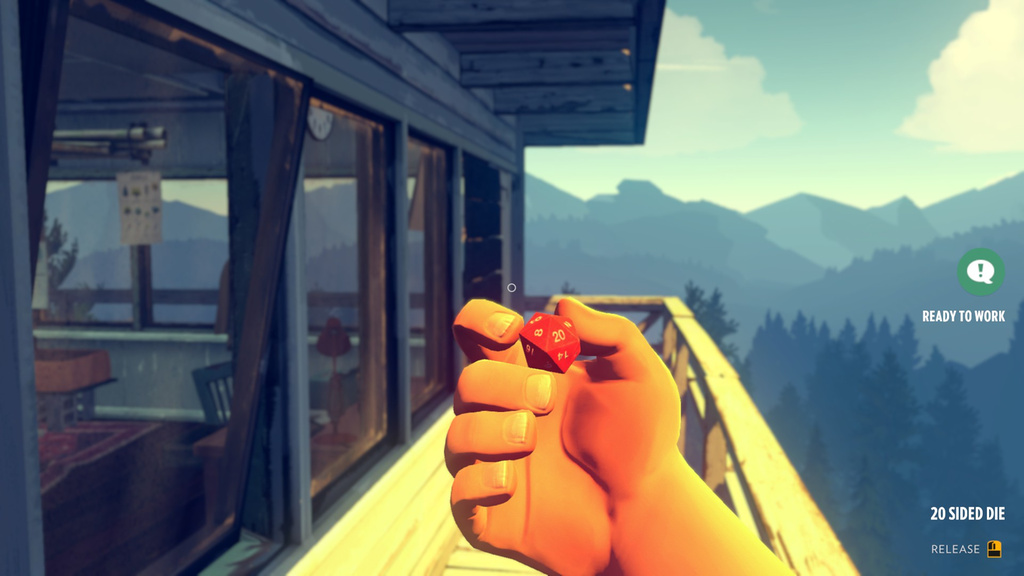 From the moment you wake up in your tower it is obvious that great care was put into making this a frictionless, pleasurable, tactile world. The game is played from a first person perspective, but unlike most other first person games you can see your player character‚Äôs feet stomping about and his rounded hands rising alternatively with each step from the bottom of the screen. You can pick up detailed models of objects and turn them around and throw them around. You have nice, wobbly ropes, and painterly, washed out textures and sunsets.

You soon know all you need to know to play through to the end. As we‚Äôve established, you are Henry, and you have to look after these woods. To do that, you have a map and compass. As you traverse the different areas Henry will scribble useful stuff on the map. You have a walkie-talkie, with which you talk with Delilah, another fire lookout. She has been doing this for years, so she will literally and figuratively show you the ropes. Maybe you‚Äôll find a couple more useful tools down the hill.

Conversation with Delilah is fluid and contextual. Holding a button makes Henry hold up the walkie talkie. You can choose to report on almost everything you see (or not). When Delilah says something, you can choose one of three dialogue options (or say nothing). Conversations can be long or short, they can change topics halfway through, they can suddenly turn into silence. Henry rarely talks to himself, so the bulk of the story is delivered through the exploration of the environment and your use of the walkie-talkie, and they are always happening at the same time. Like in real life, the world doesn‚Äôt stop for you to have a chat. You will be climbing rocks, rappelling down slopes and tracing on maps while talking with Delilah. 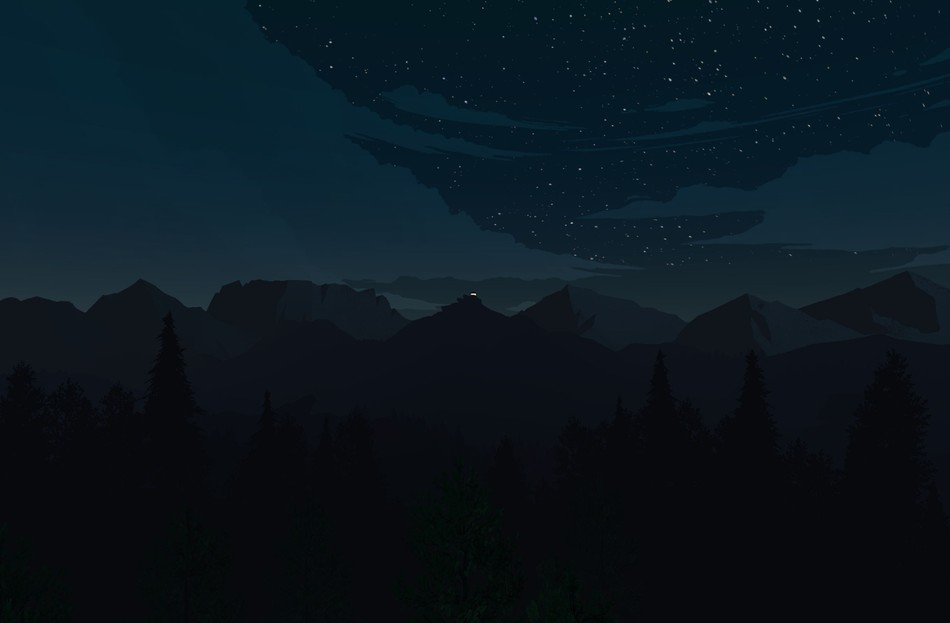 The first time you do rappel, the rope breaks, and you fall. One day, you find the rocks near the lake full of beer cans, and further away, women‚Äôs underwear. You might return to your lookout tower after a hard day‚Äôs work and find it has been broken into. You are not as alone as you might have thought in these woods. In searching for a place that you thought would give you a sense of control and responsibility, you might find yourself exposed, powerless, and vulnerable.  The narrative is constructed around these little scenes, moments that can be cute, awe-inspiring and terrifying. Both their significance and scale increase exponentially as the days and weeks pile on, and as Henry gets deeper into the nooks and crannies of the forest. Taking cues from established genres like thrillers and science fiction, things take a few dark turns. That said, the game keeps a surprising grip on this man‚Äôs journey; it limits it‚Äôs ambitions to what it knows the systems it has built can handle, and it keeps the drama grounded, close and personal where so much fiction goes off the rails.

The narrative works by acknowledging, contextualizing and giving purpose to the exploration, it becomes a driving force that keeps the player moving. It‚Äôs the night time closing in on you as you hurry home. Both rushing through the game or lingering on too long feel wrong, not because the game tells you so, but because of the organic pace with which these moments are set up and written. It‚Äôs tight, but confident enough to let the player traverse it‚Äôs semi-open world at their own pace. There are things to find, too; a cassette with some rad tunes, a turtle, notes between two strangers… If you step away from the beaten path there‚Äôs always something there, but there‚Äôs no UI prompts, achievements or unlocks to tingle hoarding compulsions. Instead, staying back and looking around is it‚Äôs own reward, so you only do it when you truly feel like it.

By the end of it, Firewatch is a memory, a slice of someone‚Äôs life, a moment of discovery. It has baggage but it doesn‚Äôt overstay it‚Äôs welcome. It‚Äôs rhythm is, appropriately, that of a walk in the woods, inviting you to stop and smell the flowers. It‚Äôs a weekend trip worth taking. 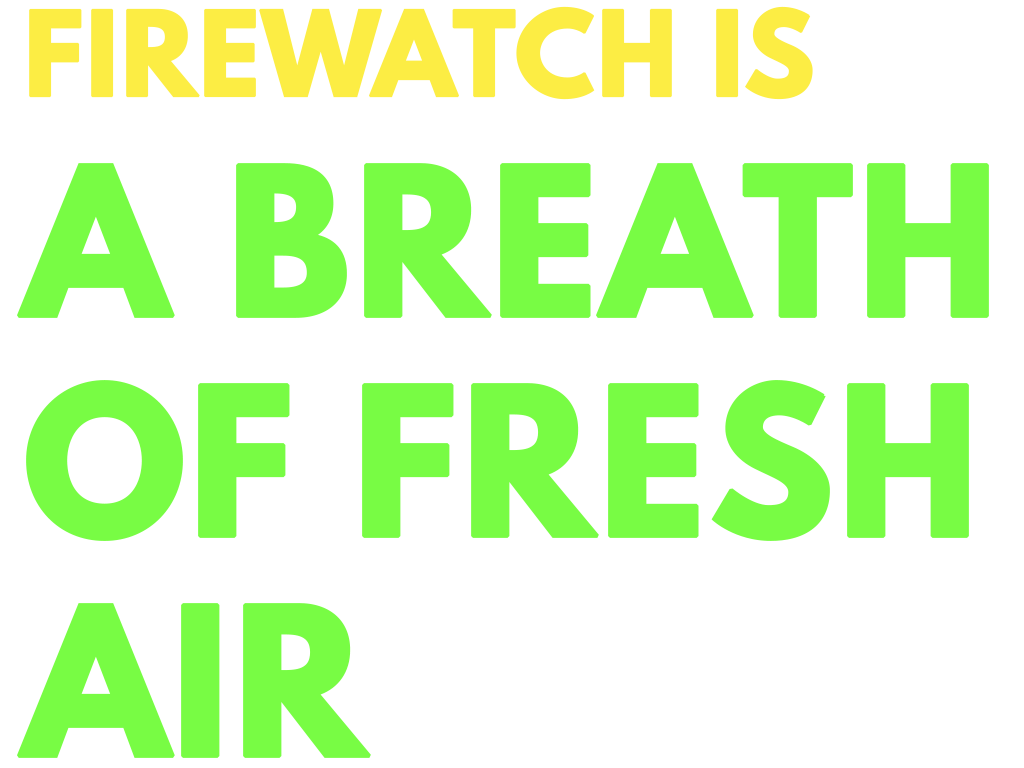 #FirewatchCommunityReviews
Login to vote this up!