As I’m sure you all know, Super Mario Maker launched last year. Interested by the levels presented at E3, I bought the game and rapidly started work on my first level, Super Mario Man. I quickly decided to make a whole campaign using this level editor for a simple reason. Nintendo’s official answer to the Little Big Planet, Super Mario Bros X and Trials of this world had one big advantage over these: Unbeatable ease of use. Every element is easily dragged and placed from one of a handful of customizable categories using the GamePad’s touch screen.

So I made a Mario Maker campaign. Every week, putting in some blocks, trying out some new ideas. It’s finally over, so here’s a quick overview of what you missed if you don’t have the game.

This world takes place right after the events of the original Super Mario Bros, when most of Bowser’s forces have been defeated. It’s meant to ease in the player with fairly easy levels with traditional level design.

This level is inspired by SMB’s own 1-1. There aren’t too many obstacles, but there are still a couple of secrets that reward the explorer.

You want to reach the beach, but it’s currently barred from entry. Guess you’ll have to open the gates yourself. An issue people usually have with water levels in Mario games is that they last too long due to Mario’s slow swimming speed, so I made this level shorter and denser to compensate.

This level features platforming on large mushrooms with death from falling off the edge never far away. You might think it takes place in a cave, but it’s supposed to be outside at night. The more you know!

At last, you reach the fortress of a Koopa general. There are two valid paths, medium and hard difficulty, while the “easy path” just makes you go around in circles. Have some courage!

Super Mario Bros 3 was an odd entry for sure, being a theater play instead of an actual adventure. Well, this world takes place after that, when Mario’s show has enough popularity to score him a TV series. Find the mythical Tower of Treasures and don’t disappoint the viewers!

You need to infiltrate a Koopa base to obtain intel about a transportation device that would let you reach the tower. This level features non-linear level design with two different routes and three different infiltration solutions.

The base had information about a hidden airship. Find a way past its guardians!

Just before landing next to the tower of treasures, your airship is attacked by Monty Moles and their devious devices. Escape quickly!

This level was actually the second level I’ve made chronologically. This level’s more vertical level design was inspired by Tower of Heaven, a fantastic little indie platformer. Of course, there is no rulebook this time around, do whatever you want to get to the top!

World 3: Where in the world is Mario Mario?

After Mario’s adventures in Dinosaur Land, he keeps travelling around the world. Here are some of the places he visited.

I’m particularly happy with this one. It’s a traditional Super Mario World level with a carefully hidden Yoshi. It doesn’t take too long to beat, the cape isn’t particularly overpowered, and it feels like it could actually be in the game in my opinion.

I know I’m kind of cheating with the title but whatever. Like Ship Salvage, the goal is to find enough power-ups to escape the level.

This level might not please everyone. It’s another water level, and this time there’s a more difficult twist on the formula: You need to keep a helmet with you until you reach the checkpoint to be able to progress further. If the helmet has contact with the wildlife you’ll have to get another, and if you duck while you don’t have a helmet on your head you’ll wear it.

So you’ll have to get another.

Quick trick: Start the level wearing a helmet to avoid this, and if you feel like you’re overwhelmed by the number of fishes don’t be afraid to throw a helmet at first to clear a path.

There’s just not enough space for Mario’s mushroom belly! This autoscroller has you ducking into tight passages to succeed, making it a very tense level. 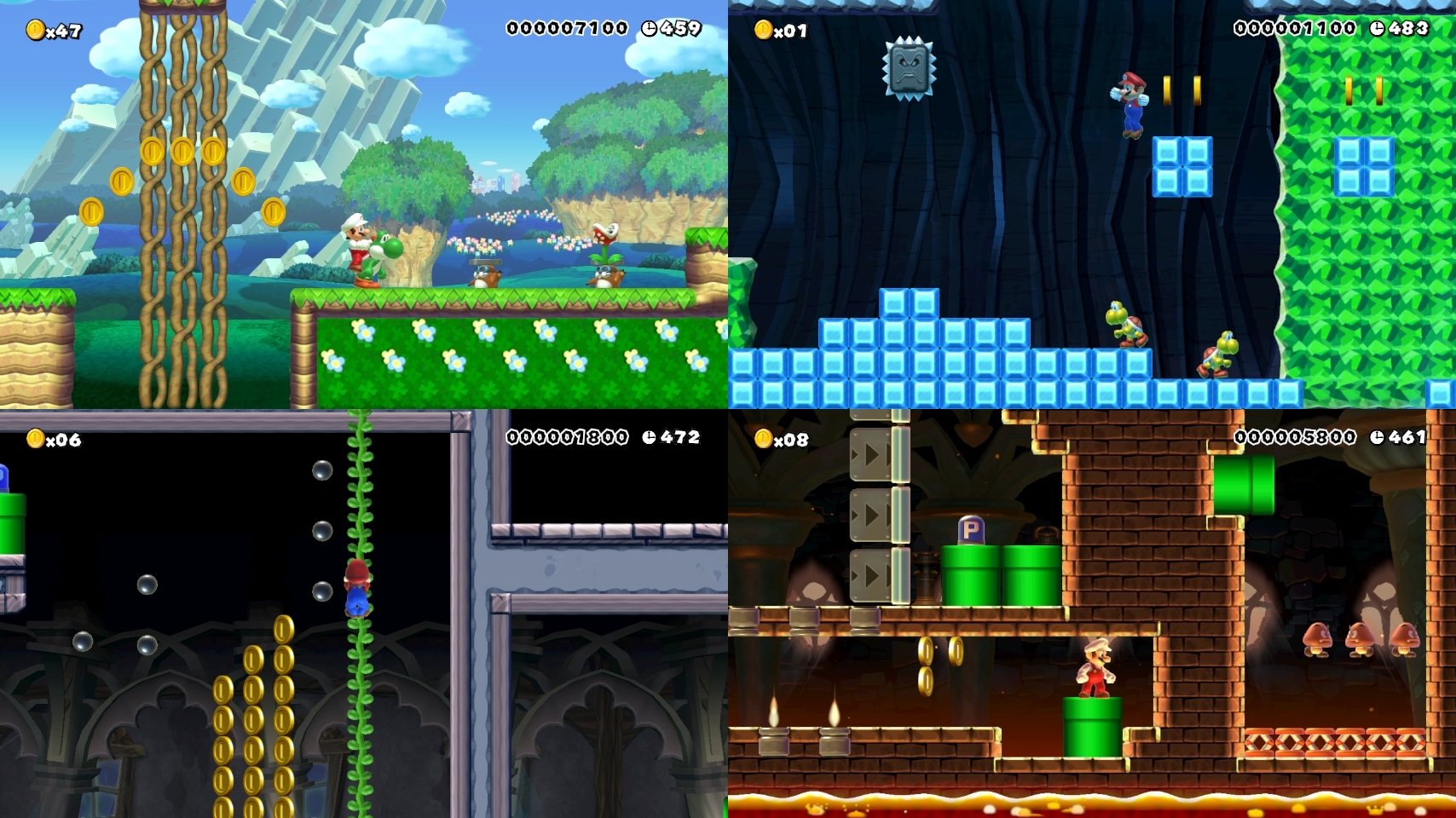 Bowser kidnapped Peach. Doesn’t that story feel familiar to you?

While trying to run after Bowser, you realize the royal garden has been attacked by Monty Moles. Better get rid of a couple when you’re there, right?

This is the only ice level in the campaign, promise. Features upper paths that are more difficult to reach but give access to bonus areas.

This shortcut to Bowser’s castle is all about the P Switches. You’ll need to use those to open doors and progress further in.

Mario is going through Bowser’s forces at breakneck speed. In order to remedy the situation, Kammy Koopa attempts to stabilize a time portal to bring back past allies and stop you… Unfortunately, it’s not going very well. Features broken pieces of previous levels and a surprise apparition at the end.

The level has been reported to cause “a erection” by a Miiverse user. You have been warned. 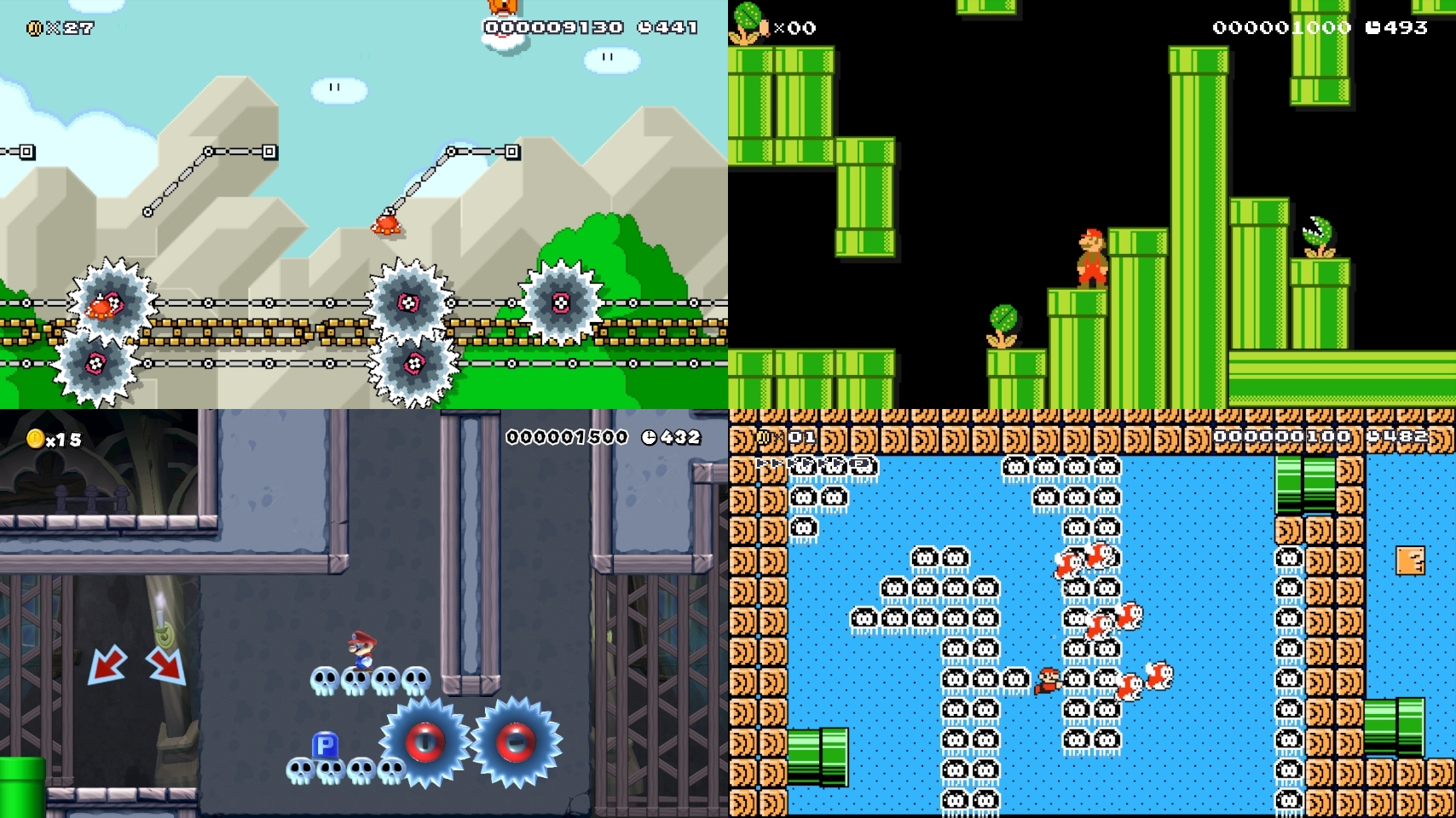 Beating Bowser and Baby Bowser at the same time was a mistake! Time and space are warping like crazy, trying to create a timeline where this would make sense. This is where the gimmicky levels start.

I was making levels at maximum speed during the creation of world 5, since I didn’t want too much work to be left during the university semester. Some of you might be wondering how someone can come up with new ideas during level design marathons like this. Well, at least early on during the creation world 5 it wasn’t much of an issue.

Indeed, I refrained from doing very gimmicky levels until reaching this world, trying to go for more traditional platforming instead. Plus, this level was made for Destructoid’s own 3 Item Challenge, in this case making the level using only pipes, piranha plants and mushrooms.

5-3: Some Switches Stick Around

Of course, we can’t always make winners. Mechanically this level isn’t the most difficult, but unlike the rest of my levels it sits at Super Expert difficulty because of the counter-intuitive uses for switches. Quick tip: Use a switch to block the last Thwomp, the concept of the level is to keep a switch for as long as possible.

Trying to make an enjoyable level isn’t always easy. Sometimes, a level of mine is called “fucking garbage” by a friend. I upload as is and move on. 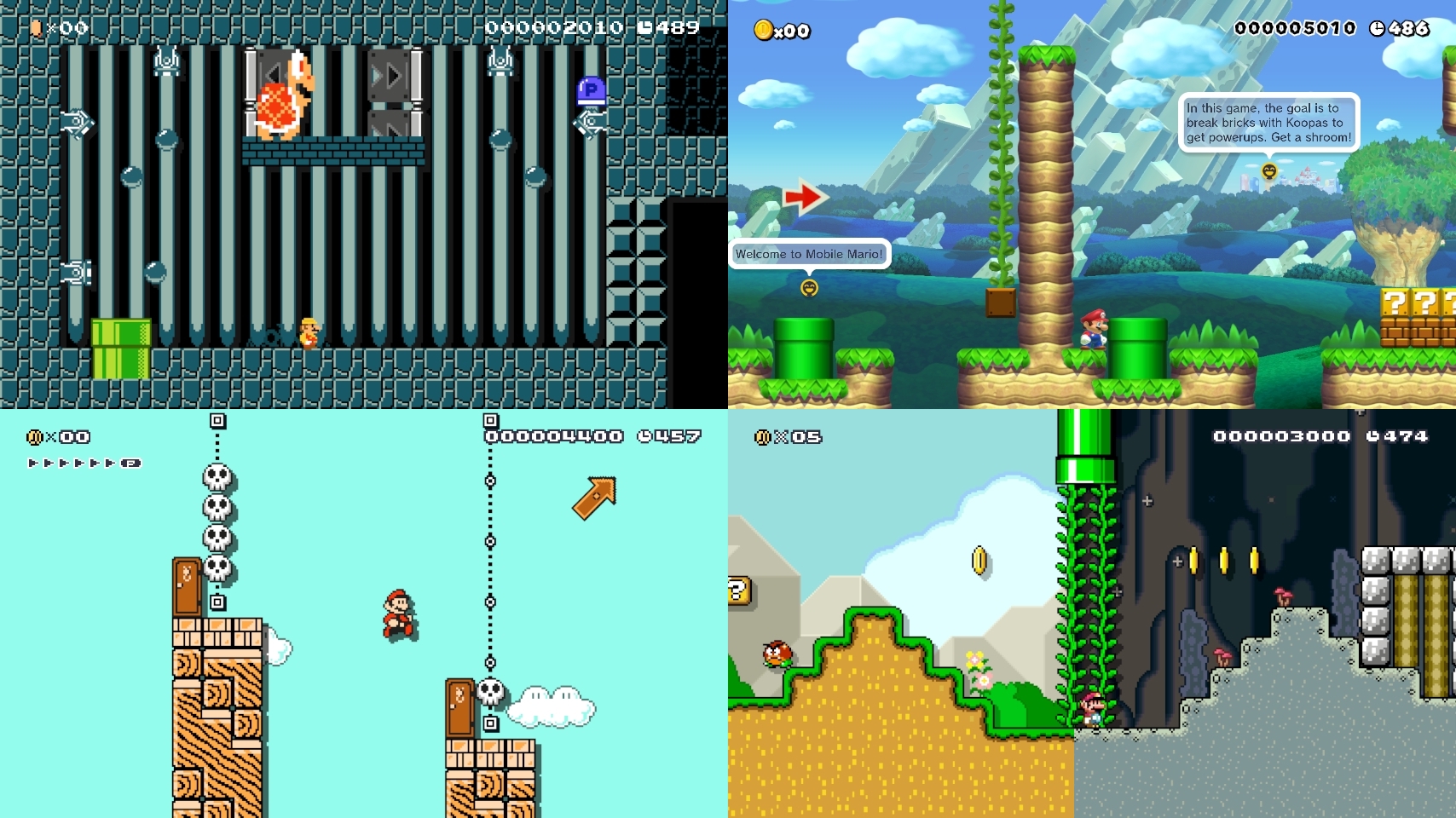 Originality isn’t easy either. Sometimes it’s better to just take two of other people’s ideas, mash them together and pass them as your own… Especially if it allows you to reupload levels you’ve already made.

Scott Pilgrim is pretty fantastic. The main character has everything: a gf, a job, a band, adventure. Reminds me of high school, except I was unemployed, had no gf and I only played piano at school which was the lamest thing ever.

This level was made for Destructoid’s Un-Mario challenge which it didn't win. I reused it for my campaign because I’m a piece of shit. It’s not a good level, it’s just a parody of bad mobile games like Pokémon Shuffle.

Sometimes I wonder about why we flock towards popularity. Why do we all go see the new Hollywood blockbuster, even if it’s not a series we particularly enjoy? Because we don’t want to be the only one who didn’t see it. What would he think if I wore that, what would she think if I said that?

Is it really okay to blame Nintendo for censorship while we censor our behavior countless times to fit in with other people?

World 7: Every day blurs together. 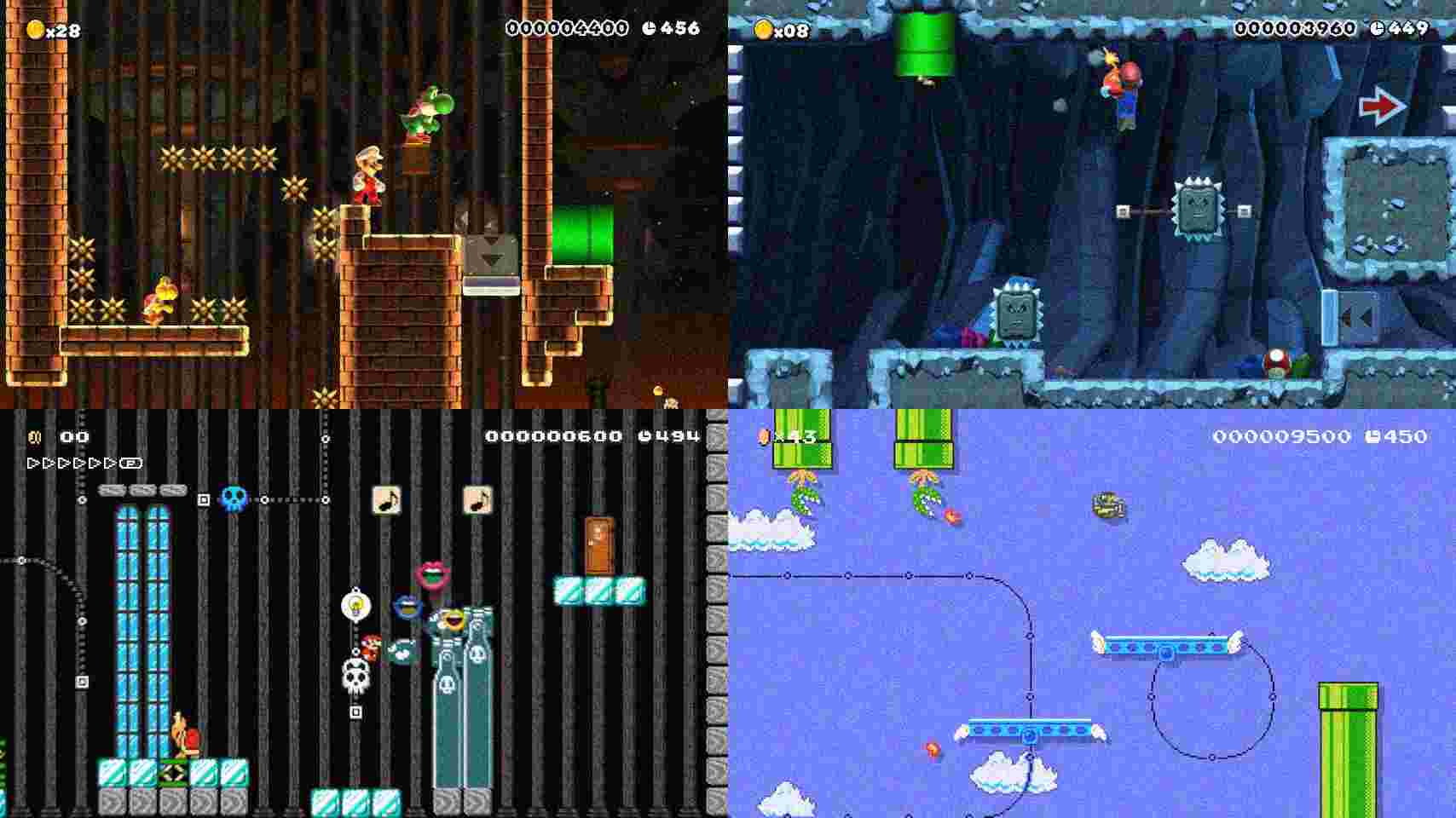 In the end isn’t that why the internet and memes are so wonderful? You can belong without ever having to show your face, or having trouble keeping eye contact, or having to figure out jokes of your own. No one ever has to know your own failures, you’re a blank slate. And with enough time, it’s so easy to be the cool person that you’re not.

Oh right, the levels. This one has bombs. Hopefully you can use them against the glitches or something.

Hitting an easy target with this one. These Japanese level creators will never see coming this powerful diss played by no less than 6 players.

Mario starts dreaming of simpler times, before the corruption of his world. One’s own mind has always been is a great weapon to ignore some problems of the world, but it can also obsess over others until they have taken over.

Now and then I think about the meaning of life and death, especially now that I’ve wasted over a fifth of it barely accomplishing anything outside of meaningless virtual worlds.

The grasp of the void has terrified me since I was a little child. I’d wake up at night and play chess with my father to distract my restless mind. Yet an endless existence has also been the stuff of nightmares.

So I go back to playing video games. I stay awake until my eyes beg me to let them rest.

Everything’s fine and nothing hurts.

#SuperMarioMakerImnotactuallydepresseditsjustametanarrativefooledyouthanksforreadingallthewaypleaseplaymylevels
Login to vote this up!