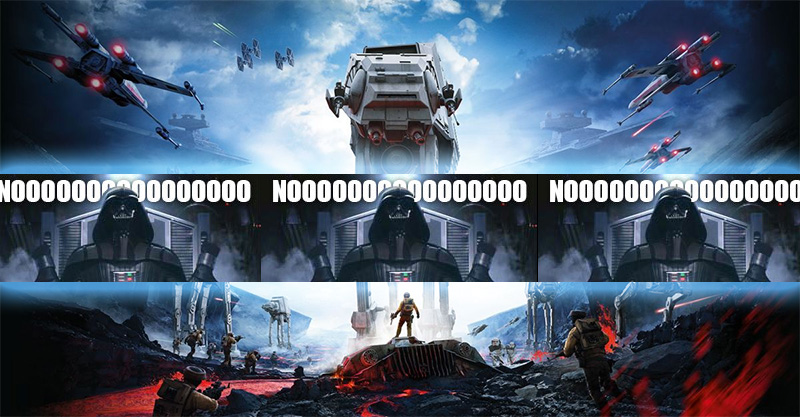 This should come as no surprise to a lot of people. The thing that got me though, is that I -knew- it was going to be a disappointment, but I held out hope anyways. Everything pointed to this being a game I would not enjoy, but little bits here and there still gave me hope that I could have some kind of fun in there. Ultimately, no.

Officially the game sold me on Star Wars. It looks fantastic. It probably looks more like fully realized Star Wars than many games that have come before. But once you start playing, there just isn’t anything there. Which is also frustrating because it seems to have such strong potential. There are inklings of some really cool stuff in there that could probably be their own games. The speeder bike section in particular seems like it could be awesome. It controls for shit, but there should be a game in there. And whine was over, I was thinking, “That’s it? You put all tat work into the environments and the bikes and the chase, and that’s it?” The majority of the game left me with a feeling of “Thats it?”

It’s a multiplayer FPS, I get that. But try as I might, I cannot get -into- that. The flight multiplayer is semi-fun, but often I felt like missions were of no consequence as one side clearly dominated over the other. If you got in the lobby of the winning side, cool for you because points. The dogfighting itself wasn’t very clear nuanced and it felt like flying around, dying a few times, then seeing who won. Soldier mode, Battlefront mode, whatever you call it, just seems like a lesson of unintentional and blind luck. Hey I’m a total newb at FPS and I know it’s really deep and competitive, but this game never gave me the feeling that I could improve my skill to better my enjoyment of the sessions.

Note to DICE designers of UI: Hey, you can’t read a damn thing with that 6 point type everywhere. Not everyone has a 70” television. What were you thinking?

In the end I can spend a lot more time describing things this game got wrong than the few they got right, which for a Star Wars fan and game player like myself is a real shame. The thought of spending additional $50 or whatever for a “season pass” gives me the creeps. No amount of DLC is going to make this game any better at its core. The price lowering from $60 to $40 in a month, well that doesn’t garner any good favor either. It makes me think EA continues to live up to its reputation as a bag of dicks. Their monetization strategy would feel a lot different if they published better games. Look, if you’re out there having fun in SW Battlefront, that’s great, I hope some people got their hands on something they can enjoy. Me though, ugh, what a bummer.

#StarWarsBattlefrontCommunityReviews
Login to vote this up!