2015 was a pretty crazy year for me. A lot of great things happened for me, but I was also kept grounded by some terrible things that happened as well. Maybe it’s karma or whatever you want to call it, but at least I’m alive, happy, and extraordinarily excited about things going into the upcoming year.

I played a shitload of games this year. Every January, I tell myself that I am going to make a spreadsheet or keep some tally of each game I play through so that I have some number to brag about to the internet come late December. I always forget.
Over the last week, I’ve been trying to remember each game I played, and while I will be the first to admit that I don’t have the mental agility to keep track of all the titles that crossed my path, I do have a number of games that left a lasting impression on me.

The Witcher 3 and Bloodborne absolutely blew me away. Until Dawn thrilled me on two different levels. SOMA made my brain hurt and so on and so forth. There were a lot of great games that game out in 2015, and there were a lot of ones that sucked.
The game’s that really stick out to me now, as the coffee courses through my veins and I think of things to write about, are the off-the-walls, screw you if you don’t get it, downright zany and weird games of 2015. Maybe there was something in the game developer water this year, maybe a consortium of lesser-known devs huddled under the light of a red moon to make a pack to create a stable of games that go to bizarre places. I don’t know how, or why this happened, but I do know that it was a good year for weird games. 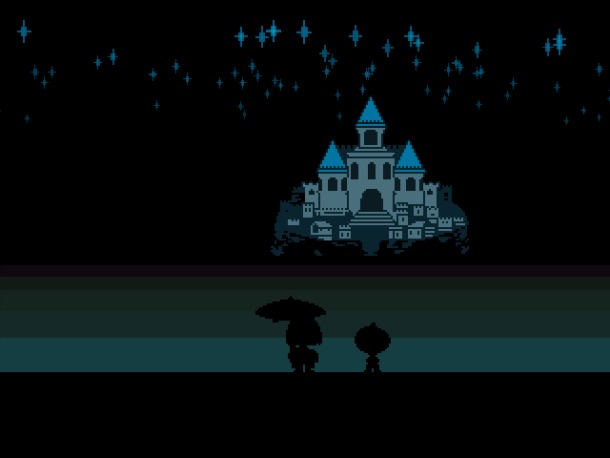 Can anything be said about Undertale that the internet hasn't already stated, argued, or assumed about the charmingly absurd little RPG?

Probably not, but bear with me.

Undertale is powerful in that it means a lot to a lot of people. It’s a game that is first and foremost about subversion – which if you read anything I write, you know I’m all about the subversive side of games – and much like Shower With Your Dad Simulator, Undertale is an experience that no one really sees coming. Unless you have used the internet in the past three months, of course.

I couldn’t get enough of Undertale. I bought it on a whim a day or two after it released on Steam, simply because one or two critics I respect mentioned that it was interesting. With no real knowledge of the game – save for the fact that you might be able to talk your way out of some stuff – I plunged in.

The beauty of Undertale and the reason that it has garnered so much attention in the wake of its modest release, is that it is arguably the most self-aware game out there. Every little piece of the game is designed in such a manner that it makes the player feel how they always feel playing a video game. Visually, it hearkens back to NES-era, turn-based roleplaying games. It’s simple opening is reminiscent of a time where games didn’t bother making you watch a forty-five minute cutscene just to learn that you’re a vaguely troubled badass who is going to shoot a lot of people. Undertale ushers in gamers with an air of familiarity, just to set up its mind-boggling conceit.

Of course, it’s selfish to talk at great lengths about how Undertale plays with expectations by breaking the fourth wall constantly and shifting interactions based off of minor, seemingly inconsequential choices.

And just like it’s selfish to talk about Undertale’s spoilerific actual meat of the game, it’s unfair to not talk about the humorously weird elements of Undertale that make it genuinely endearing.

Undertale contains some of the most enjoyable dialogue in any recent game. It’s a blend of EarthBound whimsy punctuated by SMT: Nocturne nihilism. Undertale is the doped up, dying patient at the end of the hospital hall that uses gut-busting humor to stay just above the crushing weight of existence.

It works, too. Undertale’s writing and the comical characters that inhabit the game are the designs of a jovial madman. Conversational moments rise and fall as often as players change screens. Mix that in with adorable characters who pour their heart out on the battlefield (or in the bedroom, even) and you’ve got a game that defies explanation simply because it’s a mix of everything you never knew you wanted.
--

Of course, there's Dropsy and a handful of other games that I wanted to include, but for the sake of time, I'm going to have to stop myself here. Consider this part one, if you will, I'll be back to write some more real soon.

#UndertaleShowerWithYourDadSimulatorD4
Login to vote this up!