Jiraya’s Preview - A place were yours truly (the self-proclaimed gif meister), do previews on games! There are even partial analysis on game features and other general information, some previews may even become like full reviews, stay tuned!

Disclaimer : Opinions expressed here are solely my own and do not express the views or opinions of any other third-party or group, the preview copy used was acquired with my how resources. 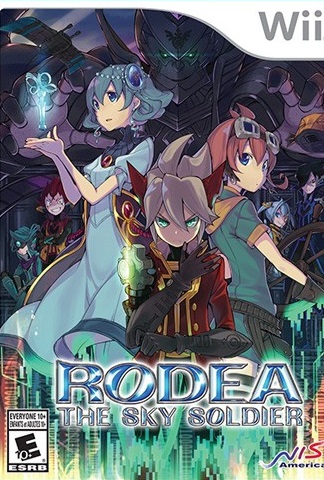 This is my preview of recently released Rodea: The Sky soldier (original title 天空の機士ロデアー Tenkuu no Kishi Rodea  ) a game envisioned  by none other than the well know Yuji Naka (programmer and producer of games like Sonic Adventure and Phantasy Star) , this preview is based on the Wii version ( I shall do a comparison blog later on)

The original Rodea for Wii was ready by 2011 (has stated by it’s Mr.Naka)  but had a turbulent time to market due to it’s publisher Kadokawa Games (which was responsible for the Wii U and 3DS versions of the game).

A tribute to many of Naka’s past games, Rodea show it’s fangs on the Wii version like no other, bringing close resemblances to the freedom of movement from games like Nights into Dreams... , along with the speed commonly associated with the original Sonic franchise.

This heritage is clearly show in each game mechanic, level design, colorful animation and soundtrack.

The Gameplay centers on the sky soaring mechanic were the player chooses with the Wiimote a position to fly too and them press the B button to soar in that direction , Rodea can also do charge attacks while in flight by pressing the A button.

Other gameplay mechanics include (but are not restricted too):

·         A visor that allows the selection of multiple simultaneous targets to tackle with the charge attack.

While playing and advancing trough the main history scenarios to play with 2 players get unlocked (could not properly evaluate them yet ).

While the Wiimote is very responsive and the controls fit the game nicely, the camera can and will get in your way from time to time, it’s a nuisance that can be overlooked considering the rest of the package , unless you are a camera control aficionado, in which case you shall hate the slow default turning speed and the way that objects may sometimes “hide” your character from view.

The most common segments are platforming which shall make you run, fly and charge vertically and horizontally in great speed and “enemy cage” areas where you need to kill a set of enemies before proceeding, level advance is marked by bells from which you can restart in case of death.

Level objectives are highlighted by sky-high lights (no mini-map or other in screen clutter), by acquiring yellow orbs the player can also access doors which have 2D platforming bonus levels (inverse Sonic detected).

General level structure points to where the player should go without being too intrusive ( which I consider a great feature).

The general plot of the game entangles the player on the mission to save Garuda, the floating sky-kingdom from Naga, the terrestrial machine empire ruled by emperor Geardo.

Geardo  wanting the power contained in the crystalized Graviton Energy  launches a full-scale invasion which is thwarted by princess Cecilia (daughter of emperor Geardo)  and her bodyguard Rodea  , Cecilia steals the key of time (an artifact necessary for the successful invasion of the Sky Kingdom by Naga) and splits it, sending Rodea to a unknown location.

Rodea wakes up 1000 years after these events.

The plot is predictable ( some could even say cheesy) but in no way it holds the game down. All cut-scenes are skippable and most (if not all) villains have are played for laughs.

It’s a history that you can present to your children and parents alike without embarrassing yourself, just don´t go in wishing it to be superb, the history here is a means to a goal ( entangle and entice the player into going on and keep playing) and it reaches that goal with flying colors, no more no less.

The OST signed by none other than Takayuki Nakamura (Tobal 2, Ehrgeiz) is great and keeps it together with the general colorful and filled with action environments and gameplay, if you haven’t heard it I strongly recommend you too.

In here I highlight my personal Pros and Cons of this game while recommending who should play it. There is no scoring here, or there ever will be, scoring is … a thing I dislike. With that said let’s get down do business.

Who should play this?

Who should avoid it?

Have a good One !