Thankful it's Over: Bioshock Infinite 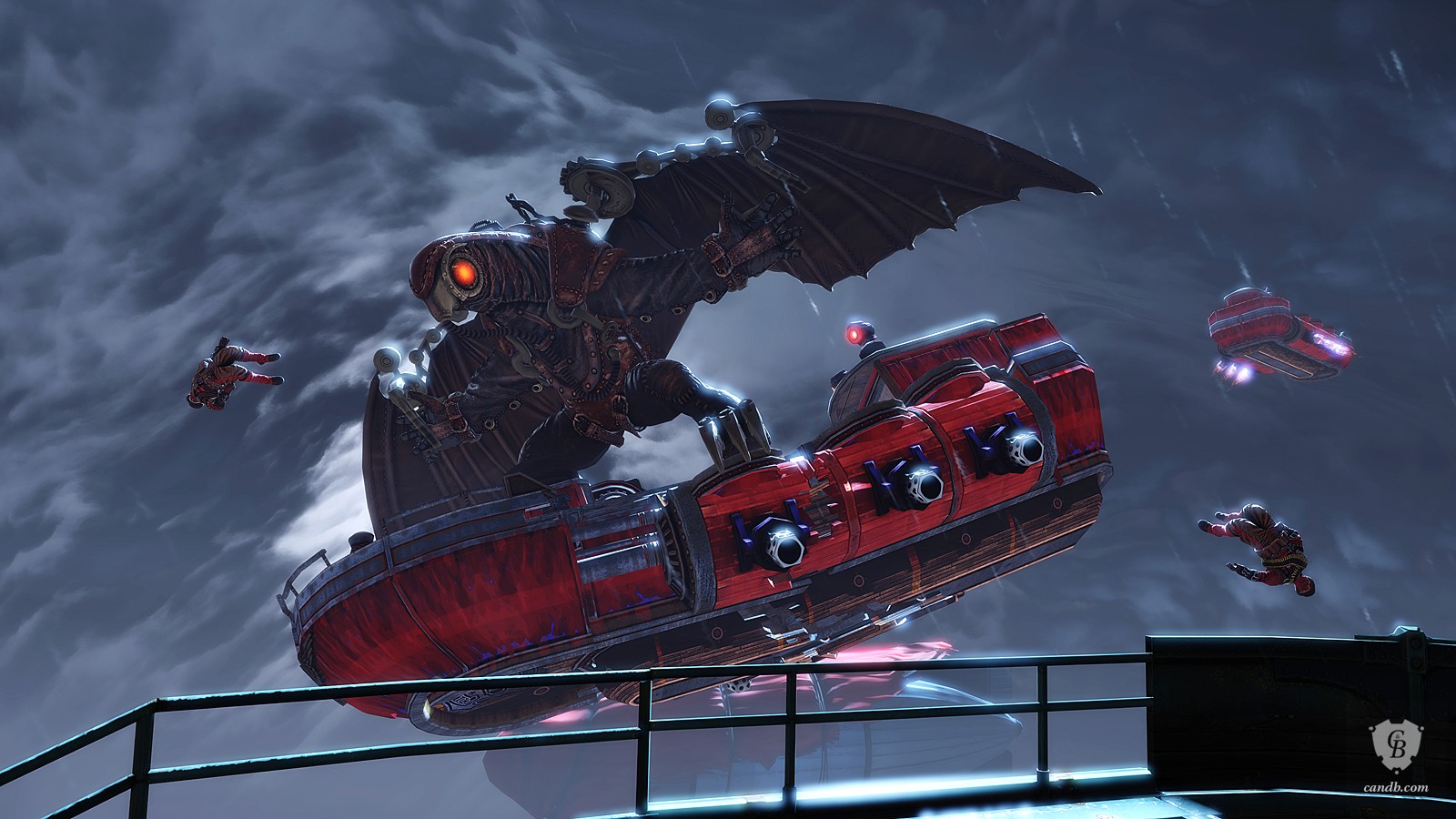 My disdain for Bioshock Infinite is well documented and is something I have maintained as time has gone on. It was a game that won critical acclaim and praise, but to me it was a game that became a dull slog by the end. Thus, I will now revisit the topic and discuss why I was so thankful when it finally, finally ended. Rather than the broad strokes as with my prior blog, I’m going to go deeper into one of the irritating aspects that drag the game down as it goes down. And that’s the combat, which as this is an FPS is kinda of an integral element to enjoying the game. Here, I'm going to talk about why I think its flawed and why its flaws made me happy to finally finish the game. Also be aware that for full disclosure, I began the game on hard mode-but after a certain point I switched back to normal and still had a lot of the same problems. In fact the difficulty problems were not insurmountable until the graveyard fight-more on that later. Bioshock Infinite starts out pretty good, and I actually like the beginning of the game. It sets the tone and creates an interesting world to explore, and the combat starts incredibly violently to shock you out of that ideal world. It also puts racism front and center, adding a second layer of repulsion to a society that appears pretty on its face but is revolting on the inside. It’s a clever scene, and it begins the first bit of combat wherein you face policemen in an attempt to progress.

And for a while, combat works to be honest. The sky rails add some movement and verticality where there wasn’t any before. The gunplay is tight, and the abilities add some variation…..but then the problems with the game begin their game-long creep into the campaign. You can only wield 2 weapons at a time-and as with most shooters that pull that, the gun you use is determined entirely by what you pick up and what has ammo lying around. And that is compounded by only having two plasmids at one time as well, which severely limits the plasmid (technically called vigor’s, but they fulfill the same gameplay purpose-if it walks like a duck and such) variety available on the fly. That reduces your tactical options, and is something that is far more egregious as combat goes on. 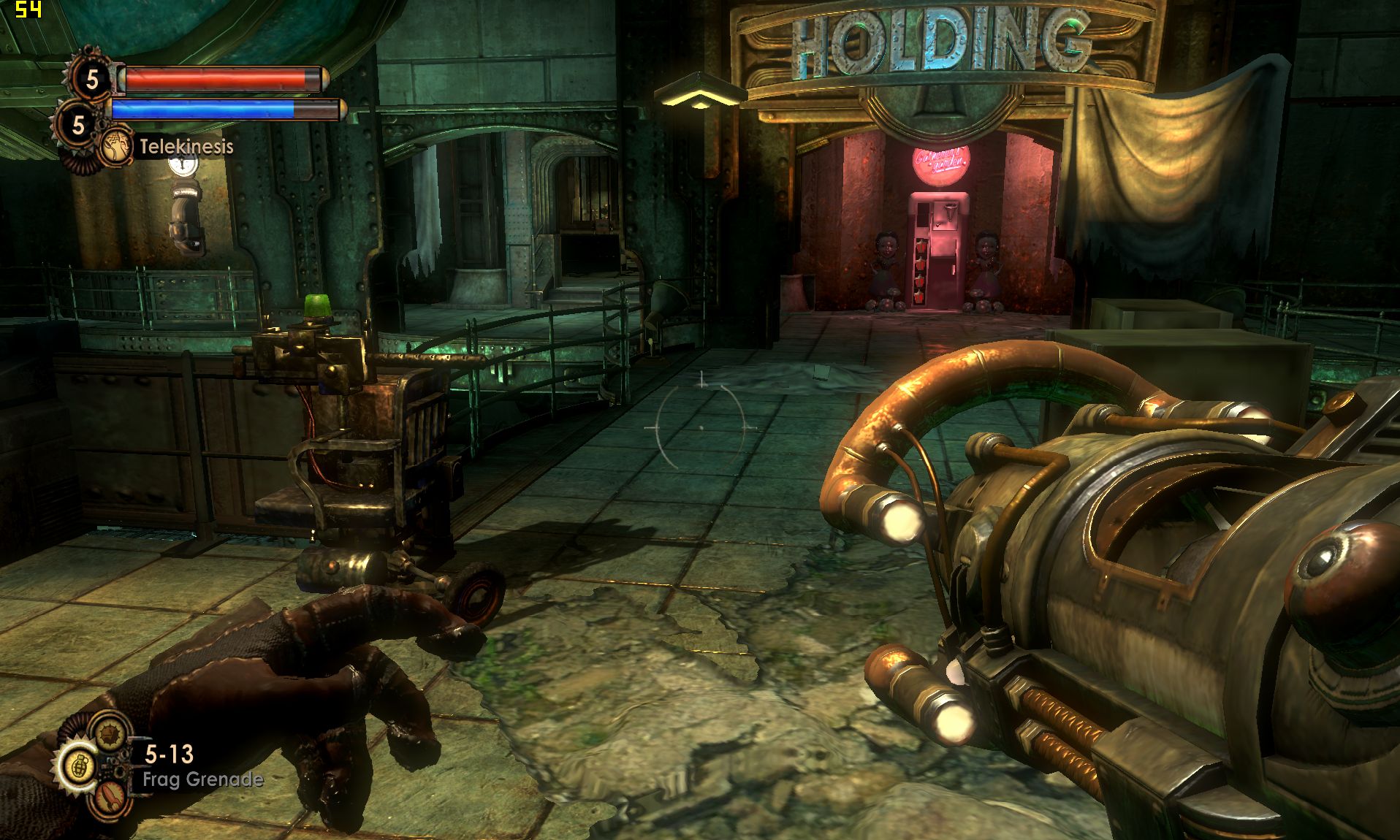 As those of you who have played Bioshock may know, that’s not the case for its combat. All your weapons and a selection of plasmids are available allowing tactics. There are even different ammo types, and the scarce ammo forces you to switch up what you’re using or it allows you to plan what you’re going to use against an enemy. You have more control over how you play, and you can adjust how you go into encounters to better your odds. And while you have to unlock new plasmid slots, you can get enough to vary tactics with them as the game progressed.

In Infinite, your weapons are just picked up at the games random decisions. You have to use the weapons it gives you, and if the weapon you picked up might be useful later then you have to lug the thing around hoping it pays to have it on hand. It also means that if you go into combat where a specific weapon would be really useful-the handymen and rocket launchers, for example-then you can’t be tactical. You just have to hope the appropriate weapon is on hand, and once it runs out-because it will run out-you have to run around like a chicken with its head cut off looking for more or you dump it.

For the plasmids, the situation is more irritating to me especially in the shadow of Bioshock. With your plasmids, you basically have to pick the two you like the most and hope they apply to the combat arena you’re going into. After a while that stops mattering as much, as most enemies are just the stock troops and require you to just use the plasmids you want. There’s not really a game play reward for having a few on hand, like oil slicks or water pools, and so the plasmid use is dumbed down to match the lower number.

Add in the fact that gun/plasmid upgrades are very costly to purchase, don’t add as much visual flair and the fact that weapons aren’t personal in their ownership and all of this combines to weaken the combat. It’s not a killer by any means, but I feel like it makes the combat weaker than it should be and it starts to contribute to the malaise of the later game. The game also feels a bit split between having regen and having health packs, which makes combat more infuriating as it seems to lean towards having auto regen but still has health kits you need to keep finding. 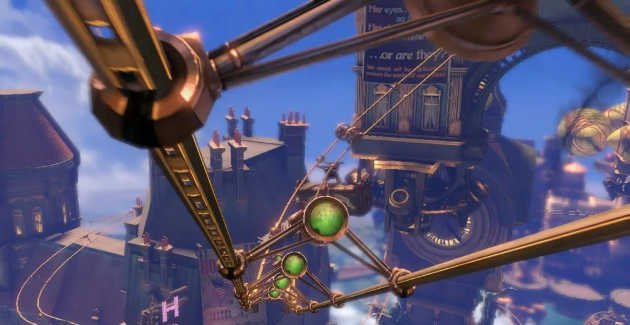 Again, at first the games combat arenas work and have enough size to allow a pretty enjoyable combat experience. The sky rails allow you to move around, and enemies have a few different units that force you to switch up tactics. Clockwork patriots take a huge amount of damage and are relentless, handyman do the same but can also prevent you from using the sky rails and firemen/crow users add in tactical elements to deal with. Add in RPG troops, and you have to keep on your toes and constantly reposition to avoid letting the enemy get a leg up on you.

But then the game starts getting toward the second half, and the variety starts to drop. Firemen/crow men almost disappear from the later game, handymen start getting rarer and the enemy grunts all look incredibly similar. The game starts just throwing wave after wave of grunts at you, with little variation and assuming that’s the best way to raise the stakes. It then starts using a few grunts and tons of RPG soldiers, forcing you to move constantly, making skylines a constant crutch and making direct sustained attacks a laborious effort. The arenas drag on and on, and the fun drains pretty quickly at that point. The combat gets less and less entertaining, more and more repetitive and worst of all-constant. The story-which was slowly devolving but I could stomach-stopped tying into combat arenas as much, and merely stood to the side while the combat took center stage again and again. Stages melded into each other, becoming less and less distinct and a thicker greyer sludge to pull through.

As mentioned above, I began the game on hard but was forced to quit during the siren graveyard fight. During this battle you are trapped in a small arena with an enemy that keeps resurrecting dead enemies and one that gives you such a small amount of ammunintion that the game becomes nigh impossible to get through without wanting to tear your keyboard in half. Its dull, drawn out and poorly designed, and it made me go back to normal just so I could get through it and finish the game. Unfortunately poor design is retained across modes, so the slog remained the same there and in the rest of the game after that point. Up until that point about, combat was fine but around that particular battle the game becomes dreadfully dull in its combat. Exploration of the world is gone by this point, and its just the icing on the rest of the games dull cake. Whereas earlier in the game you would have some division between combat and exploring Columbia, later on combat is almost constant against normal/RPG troops. The final battle drags on and on against an enemy force the game rendered uninteresting earlier into the game, and barely has any enjoyable elements. You can barely move around without getting shot up, but cover is sparse and it creates a cycle of barely moving and trying to avoid getting shot up by a tough enemy that just walks up to you. It makes the latter half such a slog to get through, and when that final, drawn out, long, dull, combat sequence was done and the pretentious story finally wrapped in a disappointing finale I sighed.

And I recall telling myself I was thankful it was over. So I could go play a game that kept me white knuckled as I played it. But that’s a blog for another day, mayhaps.