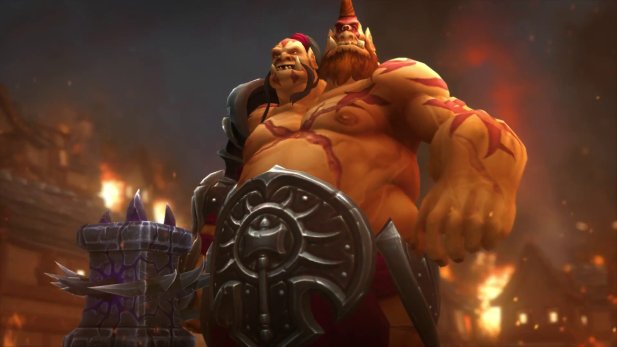 I have to admit, Heroes of the Storm's Cho'gall is a lot of fun.


And I don't easily admit that. When Cho'gall was announced I was excited but mostly annoyed, because Cho'gall falls into the ranks of "quirky" Storm Heroes, like Abathur or the Lost Vikings. To play Cho'gall you need two players, one for each head (Cho and Gall respectively). Fans of World of Warcraft may recall Blizzard pulling an April Fool's stunt a few years back, announcing Ogres as a playable race (still waiting, Blizzard!) that announced this same "two players in one body" concept. And like most of Blizzard's April Fool's pranks, they have a habit of becoming legit.

Anyways, I hate this practice of demanding players jump through extra hoops to enjoy a game, and it can fuck right off.

But it seems fate decided to throw me a bone. Heroes of the Storm is currently in the middle of the "Cho'gall Buddy Brawl" event, which stipulates that if you can convince a friend with Cho'gall to play a few games together, you unlock him yourself. Then you can play more games with other players and help them unlock him, as well. It's a still a hoop, but I found a player willing to team up with me after a bit of pleading.

I'm not "that kind" of player, so I can't break down Cho'gall's statistics for the power-gaming crowds. I can say he has an absurd amount of HP, deals way more damage than he takes (fitting for a Tank/Mage combo), mashes mobs like potatoes, is surprisingly easy for co-op players to use cohesively, and all of this power makes finding a friendly tag-team partner more or less worth the trouble. Breaking down his abilities is for another guy, though. So instead I'll talk about what I liked about Cho'gall:

I'm assuming the horse is lunch.

Choice of Mount. Cho'gall is huge. He doesn't ride (and crush) his poor horse. Instead, when Cho summons his mount he carries it and simply runs faster than normal. Gall has the option to press Z and encourage his "brother" to run faster for a brief time.

Tag-Team Spells. One of Cho's attacks is the Rune Bomb, basically a big metal bomb that rolls towards enemies. Gall has the Runic Blast spell, which detonates the Rune Bomb at Gall's command. Carefully monitoring the use of the Rune Bomb is one of Gall's key responsibilities, as setting off a Rune Bomb in a mob of minions or group of enemy Heroes can devastate them.

Naming Conventions. "Cho'gall" refers to the two-headed ogre as a whole. "Cho" is the right head (his right), and Gall is the left. When you're playing the game, Heroes takes the first three letters of Cho's player's name, and the last three of Gall's player's name and combines them into an ogre name (Mike and Wallace would become "Mik'ace," for example). It has no effect on game-play, but it is a case of the developer thinking of everything.

Appearance. To put it bluntly, Cho'gall's appearance in World of Warcraft is ridiculous, thanks to the "blessings" of the Old Gods who live to mutate things. Kudos to Blizzard for sticking with his original "ogrey" self. Also Gall doesn't have a voice like a psychotic chihuahua, which is also a plus.

All in all, I really like Cho'gall. He's definitely not the playable Warcraft or Warhammer Ogre option I'd like to see in more Blizzard and Games Workshop's games, but he's big, fat, and deals crazy amounts of damage without even noticing the return blows. If that doesn't define ogres and everything I love about them, I don't know what does.