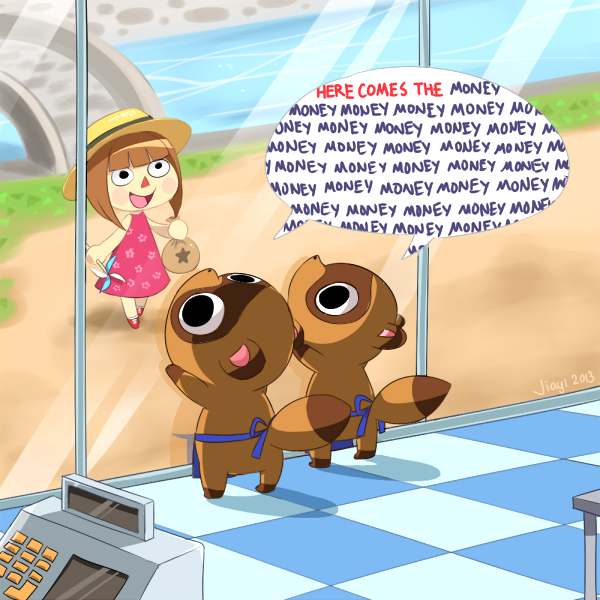 Line up to die, lugubrious, as the masters herd you towards the killing floor. As go the cows, so go men. There is no God here. Only Arbys.

My girlfriend has been slavishly playing Animal Crossing: City Folk for about a year now, and while I've had my time with the series in the past, I'm shall you, say a little old to play life with animals since real life is slapping me in the face each morning. It's been about 10 years since I've played Animal Crossing religiously and in that time a few things have changed in life, most importantly I've become a bit bitter towards the world. Where I once I saw the ability to grow your home and play grown-up I now only see a lie being told to children. I was sitting there absent-mindedly watching my girlfriend play one night when I realized that Animal Crossing is nothing but a nihilism simulator being fed to children.

For those playing the home game, nihilism is defined in philosophy as "extreme skepticism maintaining that nothing in the world has a real existence." It's been associated with atheism, but in the words of Walter Sohbchak "...say what you want about the tenets of National Socialism, Dude, at least it's an ethos." Really it breaks down to the belief that no matter what you do it means nothing in the grand scheme of the universe. Now that thought could be applied to any game because at the end of the day what is a game? It's a bunch of code that was written to distract you from the world and while away the hours between working and sleeping until death, but it takes a new meaning when the game you are playing imitates life, which leads me to the meat of my theory.

Time is a flat circle

Why can't I just see it as a cute game where I get to live with animals and fish and catch bugs all day then go to the city to get my hair done and come home at night? Because the game never ends. One of Nietzsche's core beliefs was that all life was a part of an Eternal Return where events were doomed to repeat themselves over and over again through all eternity, and while the GCN version ends after 30 years, the newer versions have calendars that continues until 2099 before rolling back over to 2000. Also, no matter what you do in the game, eventually your character will cease to be important in the eyes of the residents of your town. Even in the small window of time for the GCN version, the chances that you play the game for that long are slim, and eventually you will lose interest (or die) and the game will continue without you. Weeds will grow, citizens will move out, events will happen all without your help or influence. Think about it, right now the town you have since given up on is still moving through time, your character has been in a coma for however long it's been since you played, and the town has moved on. This was the first indication to me that Animal Crossing was a bit more sinister than what it put forward and after that the flood gates opened with different nihilistic and depressing views on what the game does.

To me the biggest goal of Animal Crossing was to pay off the debt on your house; that constituted the core aspect of the game, which in itself is pretty depressing. It wasn't until I grew up and got my own place in real life, that I realized how uncaring Tom Nook was. Day in and day out you would catch fish and dig up fossils and sell them to the very man who you owe money to so that he can sell them to others at four times the price he bought it from you. He makes out double with the money as you deposit the money he gave you back into his bank account (with a hefty amount of interest tacked on) and finally when you are done paying off your loan... BAM Nook decides for you that your house isn't enough and you need a second floor, or an expansion, or a basement! Pile some more debt on the villager and get back to fishing there buddy because Tom Nook isn't done with you. 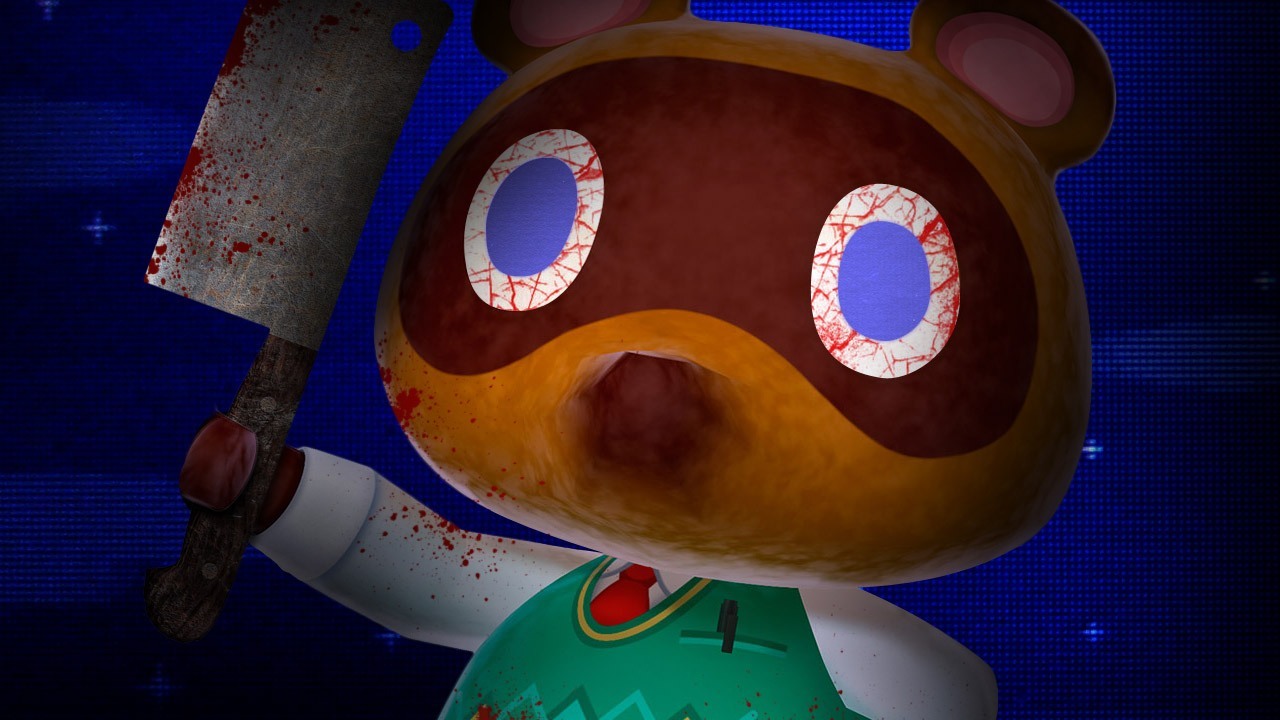 Limbs can be used as collateral

Now you might be asking why this falls into nihilistic belief: it's because no matter what you do it won't matter. Even after finishing the full house and getting the little flag you are left with an empty feeling of "OK what now?" At the end of most games, you can put it down and go, "All right yeah, the princess is saved" or "Cool, I got to Alpha Centauri first." But with Animal Crossing the game continues and you can continue fishing and collecting bugs and fossils, but the excess money you earn does nothing other than alter your surroundings. Which leads me to my next point.

Most items in game are useless 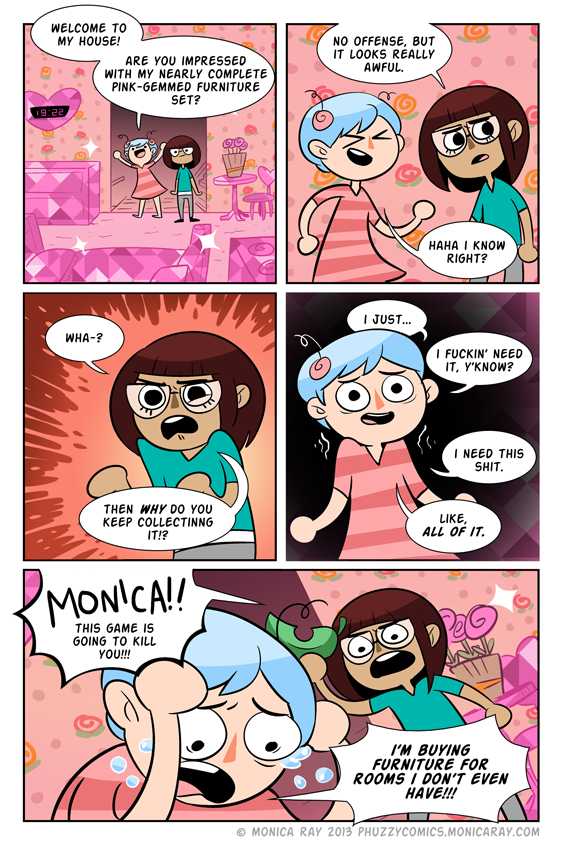 In most games you will find that buying stuff in game will change the way your character plays or modify your stats to fit your play style better. For example in RPGs you can buy better gear or weapons or spells to augment your character to the next level, or in Counter Strike you buy your weapons for that round. Apart from the tools, the items in Animal Crossing are purely cosmetic in purpose. Yes, there are some Feng Shui advantages, but for the most part the items are useless. They represent the vanity and shallowness of a society that tries to mask it's impending death with shiny things, and for the most part that is what keeps my girlfriend playing. She is determined to get every item in the catalog, so much so that she will buy any item that she doesn't have and then sell it right back to Nook for a major bell loss. Why? Because capitalism cures your meaningless existence that's why. Even when you have an item that you like, you are just one random conversation with a villager away from having that item taken from you.... 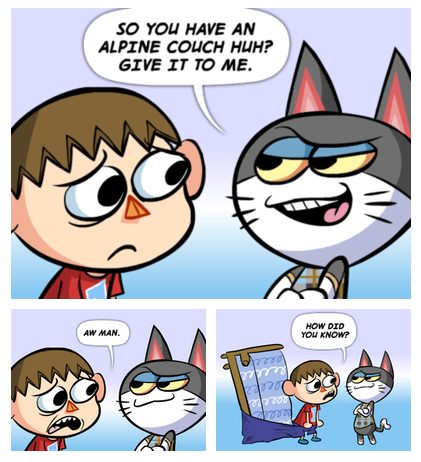 Nietzsche saw nihilism as the ultimate decline of western society, due to the lack of higher morals and to the loss of importance placed on religion. Without these morals it would lead to a society where "everything is permitted." It reminds me of a quote that was at the beginning of American Psycho.

"...In civilization there have to be some restraints. If we followed every impulse, we’d be killing one another."
-Judith Martin

Every now and then in the Gamecube version if you have an item on your person a villager will say "hey that item you have there looks cool, I'm taking it." It's gone, you can't stop it and all you can do is watch them hang their trophy in their house where you can't touch it because it's theirs now, not yours. The villagers express little to no regard for the basic moral idea of personal possessions. Even Serena, the supposed deity of the world, will jump into a petty tantrum and steal your tools, based on pure chaos. And those aren't even the worst examples of ethical degradation in Animal Crossing. That honor goes to Redd who shows that moral identity is truly dead in the world of AC. What right minded society would allow a known counterfeiter and price gouger to continue selling items?

I am usually terrible at closing blogs so I'll leave you with this. All of these examples are presented under the guise and veil of a family game that serves to hide Animal Crossing's true nature, but in the end it doesn't matter because we are all nothing in the eyes of Tom Nook.

#NintendoNihilismOpinionAnimalCrossing
Login to vote this up!