Don't trust the Lalafell's: a journey through Eorzea!

Greetings! It’s been quite some time since I last updated this (damn thesis!), but finally found some time to keep up with my gaming. This month, I decided to give Final Fantasy XIV: A Realm Reborn a second try, after hearing that the expansion streamlined a lot of things (mainly, doubling experience received from the Main Quest, eliminating the need to grind in between levels). Also, it was dirt cheap (the equivalent of $12 dollars). Ended up expending quite some time on it, and wanted to structure my thoughts on it, in order to find out why it could hook me while other MMORPG’s couldn’t. 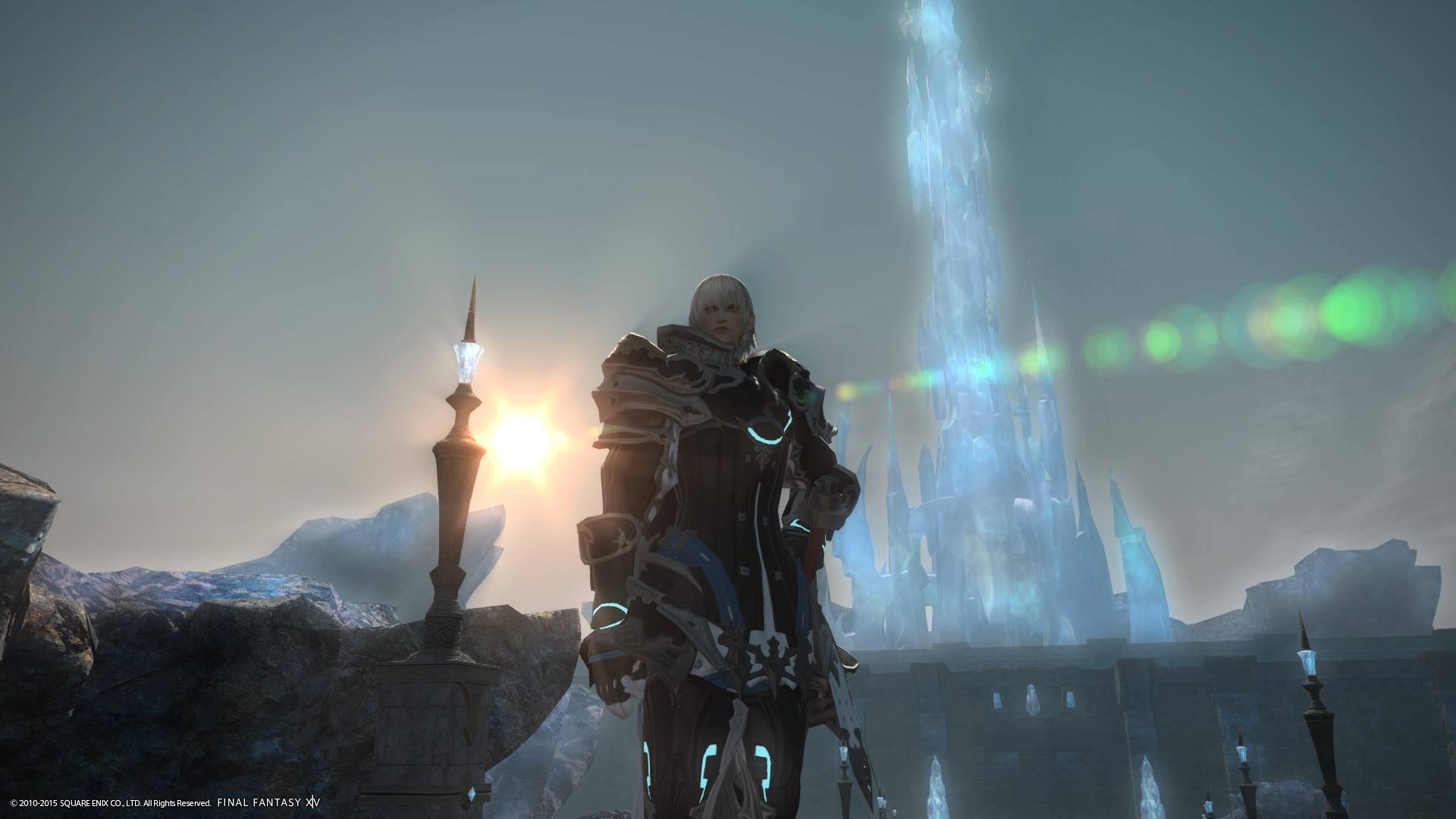 This here is Leith Tearlach, on dashing Iron Works armour. Yes, he looks like Haucherfaunt. No, it was not done on purpose, it's my first character! Anyway, my favourite class has always been Paladin, so I started as a Gladiator in Uldah. Class abilities and play style fit the archetype really well, with a great focus on reducing damage taken and covering weaker allies, with some (insubstantial) healing on the side. It is also not very complex to play, a boon for my turtle-slow reflexes! And if things get out of control, Hallowed Ground makes for a nice panic button. Levels 30 to 40 were hell though, due to lack of a tank stance; it gets so much easier once Shield Oath unlocks.

This I can manage!

I’m not a big fan of the genre, as the cooldown-based combat is quite boring, and when badly designed ends up consisting of standing in front of the monster and hoping your stats are high enough to defeat it. However here it finds a little more natural, a consequence I think comes from the way skills are designed: while you can’t actually press a button to raise your shield, one skill raises automatic blocking by a great percentage, so it is possible to wait for the enemy to channel a strong attack, and activate it to counter it; others can also be Stunned or Silenced by using their respective abilities. It’s also nice that some later enemies use attacks that have no area of effect indicators, so it is up to the player to notice their animations in order to determine how to proceed.

The first 15 levels or so are, to be blunt, a chore. Playing errand boy gets tiring after a while, not helped at all with having to travel long distances on foot while lacking a narrative drive to do so. Things do pick up afterwards, and the payoff is really worth it: the cutscene where your character leaves it’s starting city and every quest giver comes to say goodbye, with the classic FF Theme plays on the background really feels like the starting point of a great adventure (damn nostalgia got me all teared up!). It may not be the best story on the franchise, but we do meet some interesting characters (Cid and his crew are great!) and, most importantly, feels like a true classic Final Fantasy tale, with it’s emphasis on the Elemental Crystals and Summons (Primals, in this case). They are even teasing the appearance of the Warriors of Darkness! 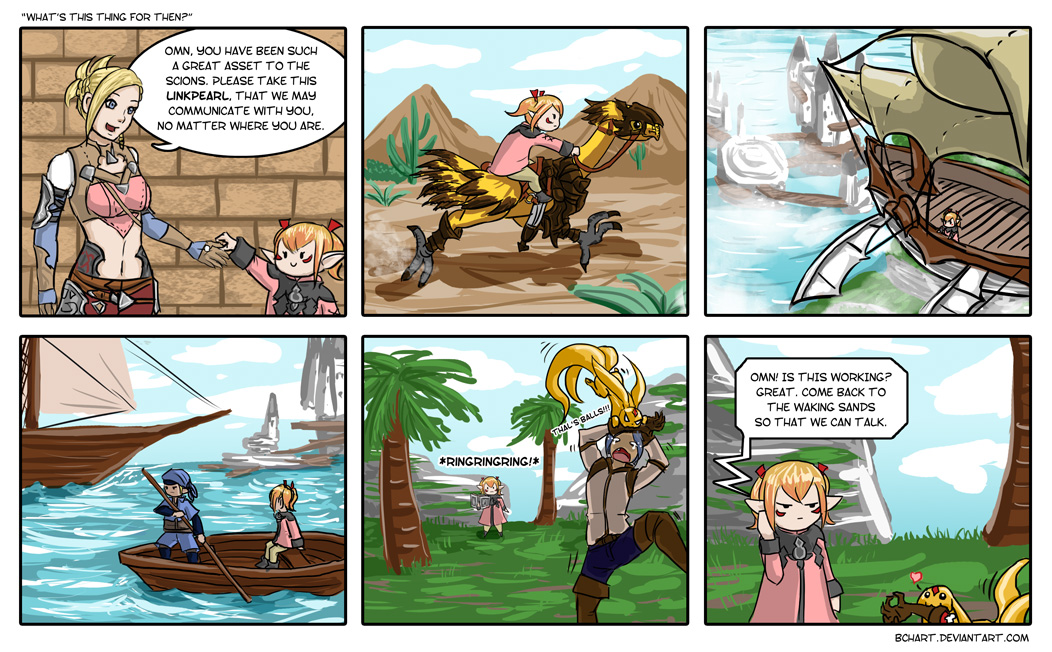 I was, in fact, kinda relieved for a moment when the Waking Sands got attacked...

The four-man dungeons have been nicely done so far, and in retrospective serve quite well as training grounds for higher content, with a difficulty curve that slowly incorporates fight and class mechanics. It is eye opening to return as a level 50 to one of the three starter dungeons, which at the moment felt to me as complicated, and realise how simple they really were (got Sastasha Seagrot while using the Daily Roulette to ease the 46 to 49 level gap, and it all felt odd… Two enemies per pull, really? And just four skills to have in mind? Even lost aggro on some mobs due to forgetting to Flash more to compensate for the lack of Shield Oath -_-u). In retrospective, Haukke Manor was the dungeon that really ingrained in me what is expected from a good tank (enmity rotation, positioning mobs backwards to the party, off-cooldown abilities, etc.), courtesy of some really deserved “u r a crap tank” rage quits. My favourite has to be Wanderer’s Palace, with all the running away from dead-eyed, knife wielding giant Tonberries!. Tamtara Deep-croft (Hard Mode) is also creepy as hell, really hoping to see Edda return in a future patch.

Sleep is for the weak!

Anyway, while trash mobs are never really hard and frankly can feel like a chore at times, the boss battles more than make up for it, as it was nice to see that really only a few are clean WOW-style “tank and spank’ encounters and most have a unique gimmick to be wary about. In particular, I remember that my “wake up” boss was the slime on Copperbelt Mines, along with facing the so-dreaded Teratotaur “the PUG Killer” in The Sunken Temple of Qarn (that dungeon in particular features a steep difficulty spike for it’s level range, no wonder it is optional). Other ones I’ve really liked have been the dragons in Stone Vigil, and Coin-counter in the Aurum Vale (always nice to have to watch boss for cues and not only for floor markers). And let’s not forget about Biggy the Spriggan!

That said, it is a little disappointing that newer dungeons are very linear, with little exploration chances, in contrast to earlier ones which have plenty of opportunities to sidetrack in search of extra treasure chests. It’s an understandable decision that caters towards end-game players who enter these for their daily Tome-stones, but that also brings the problem that they will look towards clearing them as fast as possible (being fed up with running them again and again), which forces us first timers to hasten up the pace and not really enjoying the trip. Yes, I am talking about you Au Ra Dragoons with anime names pulling half the dungeon and then disconnecting at the wipe >.>

Also, don't be this guy.

The worst case by far are Castrum Meridianum and Praetorium, which bring closure to the main storyline and thus feature lots of cutscenes: the group I was assigned to blazed from boss encounter to the next, leaving me stranded half map behind and with no option but to choose between either enjoying the scenes or the boss fights (while it is possible to watch most of them through the cutscene journal, pacing is ruined and makes for a VERY anticlimactic conclusion).

Moving on the end-game raids, I really enjoyed the recreation of the Crystal Tower from Final Fantasy III, it is a lot of fun and demonstrates just how much knowledge of the classic games the developer team has. Also, being 24-man makes all fights turn into a delightful organised chaos, with people running everywhere and filling the screen with seizure-level spell effects (and the PS4 manages all of this without dropping in frame rate!). I really hope the trend of adapting former game’s content to fit the lore of this instalment continues, and have to opportunity to fight Zeromus and his Elemental Fiends on future expansions. 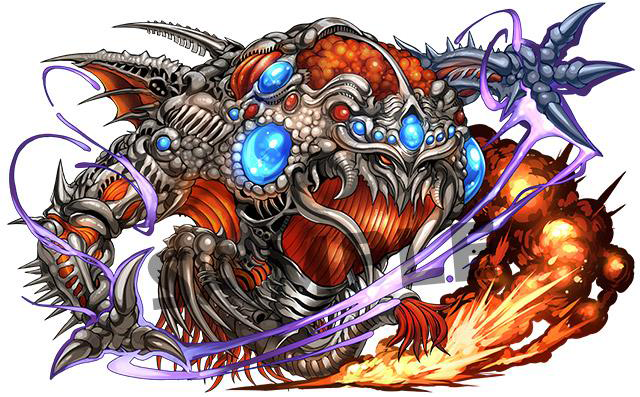 On the other hand, I’m not happy with the decision of setting the epilogue of the game on the Binding Coil of Bahamut, as it involves the most complex boss fights in the game and was meant to be able to completed by just the most dedicated hardcore “game-as-a-job” player groups. However, this also means that a lot of the player base would not be able to experience the storyline contained within, which closes most important plot points, leaving us more casual players with no option but to look for this information online, without experiencing it first-hand. I was lucky to find some awesome level 60 players using the Party Finder who offered to “carry” me through this content. Thankfully, I’ve heard the next one (Alexander: Gordias) corrects this by offering a “Storyline” difficulty tailored towards pick-up groups.

The spotlight of the game are, without a doubt, the Trial challenges featuring the Primals. While the first one (Ifrit) didn’t leave me too much of an impression due to being extremely simple, things get much better onwards. This in no small part is helped by the amazing choice of music for each encounter, which explores lots of different genres and rhythms (Metal, J-Pop, Drum & Bass, even Surf Rock!), along with changing to indicate a battle phase transition. What’s even cooler is that the lyrics are also designed to reflect the situation and nature of the Primal to which they belong: Kobolds taunt the invading adventurers to surrender to the Lord of Crags (“Bow down over dweller!”), while the mild mannered Sylphs sing praises to their wise defender (“Lightning bright, thunder bold, guiding us forevermore…”) and Sahagin raise a battle chant to the primordial serpent (Swallow up the world, Leviathan!). Both Leviathan’s and Shiva’s fights are among my favorites, as their music and mechanics work great in tandem, with lots of player movement and a “fun” atmosphere to them, in contrast to Ramuh’s or Garuda’s more tactical positioning. 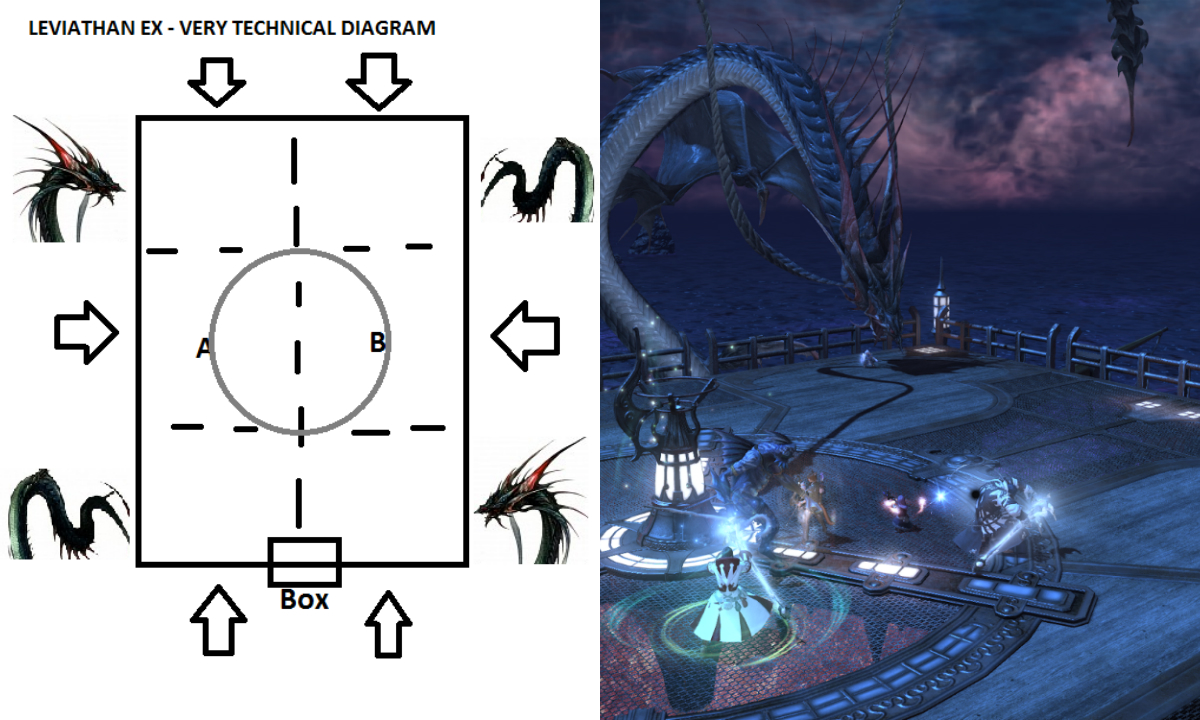 You'll be too dizzy from spinning the camera to remember this, anyway.

In conclusion, I had a really good time during my trial month, and am sure to come back on a later date once all Heavenward content has been released (and nerfed for us filthy casuals). While it suffers from some of the usual problems native to the genre (and most of them are result of the players rather than the developers), a lot of passion has been put into the game, and can see it only becoming better with future expansions. Thanks for reading! 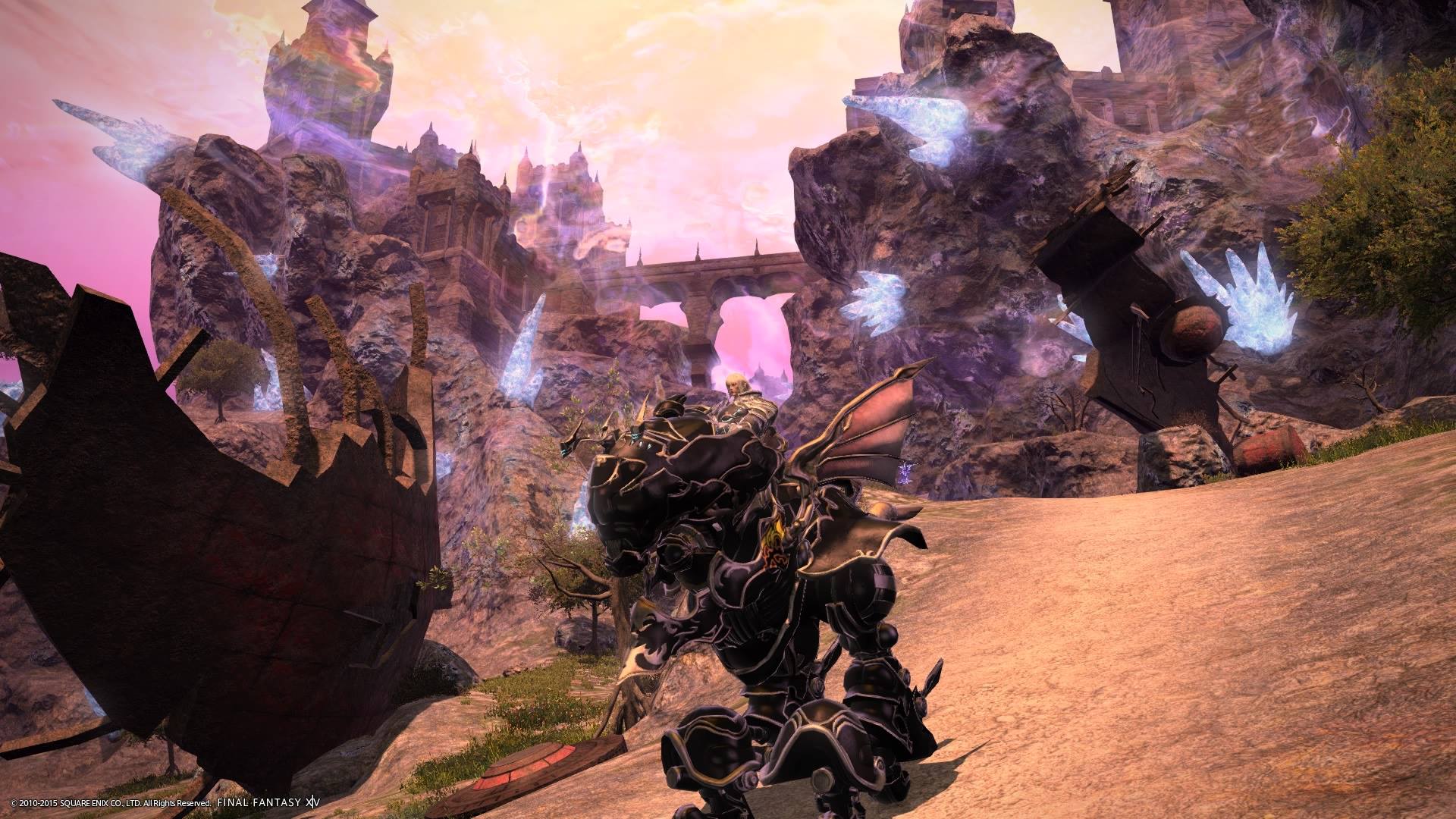