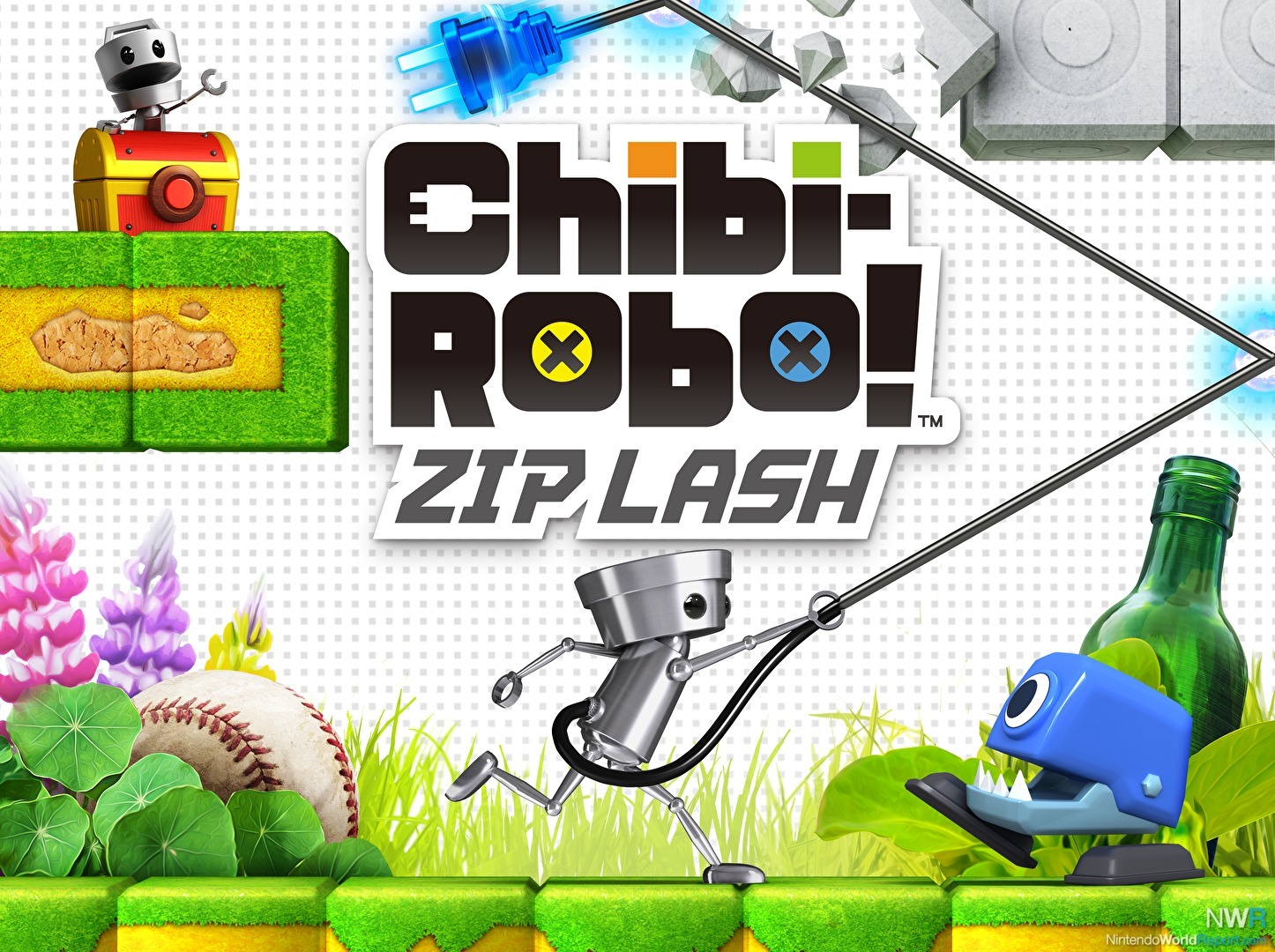 The gameplay in Zip-Lash is a lot of fun, for the most part there’s a focus on increasing his cord that way CR can hit things from a farther distance and thus pull himself up to higher heights and collect the handful of items hidden throughout each level. What I enjoy however is that with each level (so far, this is my initial thoughts and not a full review, as of this writing I have completed World 3) has a different gameplay mechanic, for the most part. There are a few levels that have the same one but be it Chibi just platforming, riding on a skateboard, boat, submarine, on balloons picking up and throwing bombs or various other gameplay mechanics, they play really well. The little change in level by level actually makes me wonder what the next gameplay mechanic could be. Which helps alleviate one of the major problems I have with the game that seems to be the biggest problem. The roulette wheel for level selections.

Now, the roulette wheel in of itself isn’t a bad idea, quite the opposite because with just one little tweak they could actually make that idea work really well! The fact that you could potentially play the game in a different order each time is a really cool concept to me, it makes it so that each run of the game is different! If it worked efficiently that is, since when spinning the roulette wheel it will take you to levels you’re already completed, and then you have to clear a level you’re already done. Again. Even though there’s a high chance you’ll want to do it again for the candy and costume in most of the levels the better way to handle this would’ve been quite simple. Because the thing is, after you beat a world’s boss it lets you choose whichever level you’d like to play, without having to spin the wheel. So you could go and choose the level you’re missing the candy or costume on AFTER the boss as opposed to spinning and MAYBE getting it. But that still doesn’t fix how to make the roulette work better does it?

It’s actually a pretty simple solution, keep the roulette but when you spin have it skip levels you cleared since you can choose to come back to the levels at a later point anyways, it solves the problem of having to redo levels and makes it so that each run of the game can be different. As is right now I just pay the in game currency to swap out all the panels to 1’s and just go around doing each and every level 1 at a time thus ensuring I don’t have to redo levels until after I’ve beaten that world’s boss. I kind of feel stupid for harping on that roulette wheel that much but when that’s the biggest problem (and a fairly significant one) it does need to be touched upon. The only other main problem for this game is some of the vehicle levels mentioned earlier. In particular the submarine one’s, because the submarine controls like utter ass, oh and you also get to do a boss fight in your ass submarine. Lovely. You know how the submarine SHOULD have handled? Like they did for the game In The Hunt! 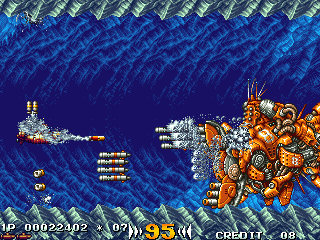 In The Hunt was a pretty fun submarine game and the controls would’ve been great for this (minus the missiles and torpedos, seeing as I actually think that part of Chibi-Robo’s sub is cute and fun) but seriously it just controls so slowly and the submarine level’s aren’t particularly fun. Which means the world 3 boss is absolutely mediocre. The boss fight isn’t hard as it does play to how slow and poorly the submarine controls. But here’s the thing, why not just make the submarine control well instead of making a boss around an awful gameplay mechanic?

Speaking of gameplay mechanics, the rest of Zip Lash controls really well actually, and when you die you (mostly) feel like it’s your fault, maybe a rare circumstance here or there but personally I feel when Zip Lashing as CR it works really well. I myself am not an expert shot with aiming that lash at all but for the most part it’s pretty forgiving so far, there really isn’t an example (aside from one) where if you miss it’s over as it’ll let you try again, unless it’s in a speed section or when rescuing aliens (more on that later) but the game controls really well and has me going back, wanting to play more. The little hover that CR gets to help him fix some mistimed jumps or when it’s required in later levels is really useful and fun to use too. CR also has a roll that makes him go a little faster and is pretty much the equivalent of MegaMan’s slide, but not quite as useful as there isn’t nearly as many areas to use it on. But it is fun to use at least and speeds you up a little bit.

Then there’s the stuff that I find cute and am really glad they added, as you may know from other reviews you can find real world candy as a collectible and other toys will want it because they’re hungry. Now the fun thing with this is twofold, one I get to learn of candy I’ve never heard of (and in some cases which I had some because it sounds good) and when you deliver the candy to the toy that asked for it they’ll usually give you a little bit of trivia about the candy too. Which I happen to enjoy, as I love candy and I love odd little tidbits that nobody really knows. CR can also grab costumes to use throughout the stages (and look totally adorable when he wears them) by rescuing aliens that aren’t trying to take over the world. There’s a few prerequisites here though, the first being that you have to of beaten the level before the alien will appear, the second thing that’s required is you have to know a code to unlock the costumes, which is easy enough honestly. There’s an entire Miiverse dedicated to just the costumes, with a separate one for the game itself. The last thing is you have to toss the alien at the spaceship without missing or you most likely lose your chance. It’s not a bad concept but… a little convoluted, but it doesn’t feel awful to do at least.

The last thing I want to cover is the amiibo that comes with the game, the amiibo unlocks a few things, it makes you stronger in stages a few times per day. The amount of times happens to depends upon how much you’ve levelled up your amiibo, the way you level it up is by beating levels, you can usually do about three levels before the storage is full then you have to upload it to your amiibo or you lose out on experience for it. The power up makes you faster and doubles your health as far as I’ve noticed, I haven’t used it as much as I would like to yet as I’ve been playing it mainly at work during my lunch break. The other thing it does is unlock a pinball machine that you spend your in game currency on (which aside from the roulette wheel there’s not much else to use it on and you have a TON of it. I’m sitting on 18k of coins). It can be used to unlock cute little trophies, or disturbing trophies. Not much but it’s a cute little addition. 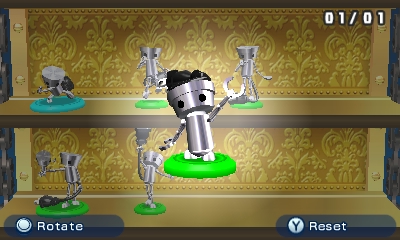 Plus CR as toad is adorable.

So in summary, Chibi Robo Zip-Lash is a pretty good game with flaws, but flaws and all I definitely recommend it. The gameplay is mostly solid, the music (which I forgot to talk about) is cute and fun and the game will just make you feel good. Plus you don’t want to leave Chibi out in the cold without a job… do you?

#ChibiRoboZipLashCommunityReviewsSolarPonyDjango
Login to vote this up!