Undertale: Thoughts from the underground 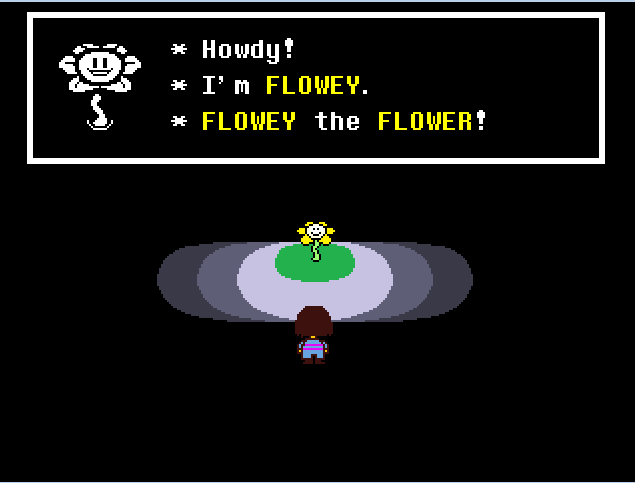 I've just finished only the second area of Undertale and I find myself with a profound feeling of wonder, accomplishment, awe, and just raw emotion along with some truly worthwhile chuckles. I've only clear what is essentially the second dungeon, the first real dungeon after the requisite tutorial dungeon where the training wheels are still on and I'm still riding an emotional high that drives me to talk about Undertale now while the emotions are still fresh on me.

This will not be outright spoilers, but I will talk about the impact of specific story moments, pretty much the first two dungeons, like I said. So pretty much, if you haven't played Undertale, this will spoil you. However, if you've played Undertale up to the second major boss fight, I'd love to talk shop, book club style. So yeah, nevermind what I said about it not being outright spoilers. They're just spoilers past this point. 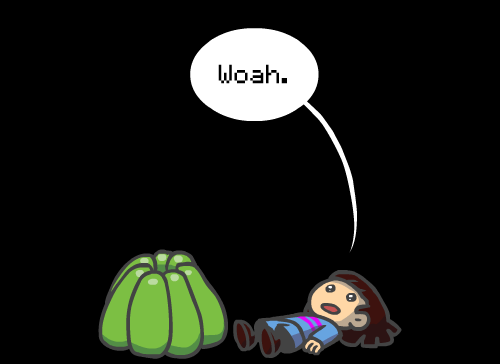 Undertale was already reviewed by bbain this week but I hadn't even read that review until just now. Unlike a lot of games, I went into it completely blind but was enticed by the absolute saturation of social media presence it had, especially in the let's play department. Asides from feeling like I had to get in on the ground floor on this experience, I only knew one other thing that intrigued me a great deal: the trailer for the game made it obvious that a part of the battle experience was a sort of bullet hell mini-game. I also knew of the mercy mechanic since the sales pitch was, "The RPG where you don't have to kill anyone!"

My experience however, was probably that of 90% of people first playing the game, and I'm sad to believe that that means most start out killing poor Toriel. The game does a mild job of teaching you how to get monsters to back down and how you spare them but ultimately, many games grow up on RPGs believing in only one thing: kill that which blocks your path.Oh sure, it's easy on the random encounters because the method to getting them to back down is more transparent and even the mid-boss ghost drops clues on prodding him to move out of the way peacefully. But Toriel was different. The game had taught me talk to monsters, observe their change in behavior, and spare them. Yes, a froggit cryptically told me that sometimes, there will be moments where I must try being merciful despite no clear indication that your choice to yield peacefully to a monster has any effect, but like I said it was cryptic, at least so much more so while being reinforced by 20 years of RPG experience. So I try weakening Toriel a few times to see if I get her to yield eventually. But later on during the second area, a book reveals something about the fight option: that the monsters are inherently weaker than humans due to humans being made of real flesh and blood and monsters being composed of unstable magic. The more malicious the intent to kill is from the human, the more powerful their attacks ultimately become against monsters. This explains why eventually after doing steady damage to Toriel, you suddenly at one point perform overkill on her. 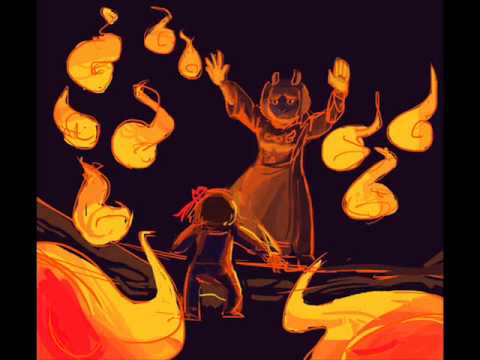 Yes, Toriel's death was sad. She clearly strains herself in pain while still trying to put on a brave face and be happy for you, the child, the protagonist. And when Toriel dies, her physical form fades away, and to really drive home the feeling of anguish you should be feeling (you monster) her soul, in the same shape as a heart as you, breaks.

Yes, Toriel's death was sad. But I didn't restart from one death. I was still in RPG mode. That Toriel's death might have been a sacrifice for the greater good. But then Flowey returns to taunt me and rubs it in my face about how I didn't even try to spare Toriel.

That really got me. Flowey, for all his appearance as an asshole flower, really shook me by the shoulders and forced me to realize this destructive way of thinking I had from years of playing 'the good guy' in RPGs and killing 'the bad guys'. So I restarted the game, thinking I could try a new run. And for those of you who have not tried replaying the game despite getting to my point and maybe further, the game once again shocked me. It actively told me that my mistakes didn't simply vanish. It knew, and it will always know.

On my second playthrough of the Ruins, things were queer. Characters seemed to remark on a feeling of deja vu. Not only did I pass through all the puzzles knowing already how to finish them but people acted as if they felt like they've gone through the song and dance before. While figuring out Toriel's fight on my second playthrough, trying to talk results with a remark of, "You remember seeing Toriel die before, but bringing that up now would be awkward."

Even after sparing Toriel from death, on my second meeting with Flowey, he still manages to push my face into the mud. He knew I had restarted. He knew I had killed Toriel before and that I spared her now. And he realizes that I, as he main character possess the same power as him: the power to save, and in actuality the power to change fate.

From then on, I found resolve to really look at the characters I meet as people inhabiting this space, rather than someone who is outright good or outright bad.The real star of this story were the skeleton brothers, sans and Papyrus. Sans, the goofy slacker and his try hard, dorkier brother Papyrus, both named after the fonts that boldly talk in. At every turn I meet them, they continue to reinforce the lesson I've learned, that the characters in this story are more than just black and white representations of morality. Papyrus should be the bad guy since he's motivated to capture a human so that he can join the Royal Guard. But ultimately the goofball repeatedly fails to intimidate anyone and even takes a liking to you. I particularly loved it when I came to his complicated sliding puzzle, and instead of continuing on like I usually would have, I decided to hear the wacky, almost Rube Goldberg-esque directions to his crazy puzzle again, and it turns out I was rewarded for my outside-the-box thinking with a revelation that the directions were even confusing him, to the point where he mixed up the colored traps, forgot some of them, and outright gave up on explaining his dastardly puzzle and opted to just leave the instructions on the ground before leaving and trusting you to read them and do the puzzle yourself (it doesn't even work!).

During the second boss fight, I had completely come around to the idea of always sparing at least major encounters due to how much I was having in figuring out the monsters up to this point in order to get them to yield. More importantly, by the time I reach Papyrus when he decides to get serious and try capturing me, I just liked the lovable bonehead too much. I decided I'd just have to dodge his so called infamous blue attack in order to stay true to these ideals I'd just realized were important to me. Showing mercy is more than just being a pacifist in Undertale. You meet and get to know the monsters inhabiting the underground and see who they truly are but ultimately your friendship is tested when a monster decides that your presence as a human is an anomaly in their life. Just how far will you go in order to preserve a friendship? For me, I grew to absolutely love Papyrus, for all it seems that he'd be better off not joining some royal guard. I didn't want to hurt this lughead who didn't even kill me when he decided his surekill death contraption was much too cliche for me to die by.

Through all his boney attacks, blue attacks, and the unexpected Pomeranian who carried away one of his attacks, I still wasn't going to kill him. And even if he killed me, I wouldn't be sad about it. I would stick to my ideals. Yes, I'd be restarting but even Flowey told me that there would be monsters who will come at me with 100% killing intent and that he was waiting for my to try and try again from my save point until I got frustrated and let my ideals cave. He literally said that, as if talking directly to me. But Undertale is a special game about realizing where you've come in life, how you make decisions, and ultimately after putting my thoughts down, a game about how far you will go to stick to your morals. This isn't just some paragon or renegade choice, where I get results but go about it as a nice guy or as a dick. This is either being someone who can live with murder, in a world that knows I've killed someone, or sticking to me ideals as a person, and never killing so long as the option to make it out alive myself is present. No matter how I'm tested, I won't kill a friend. 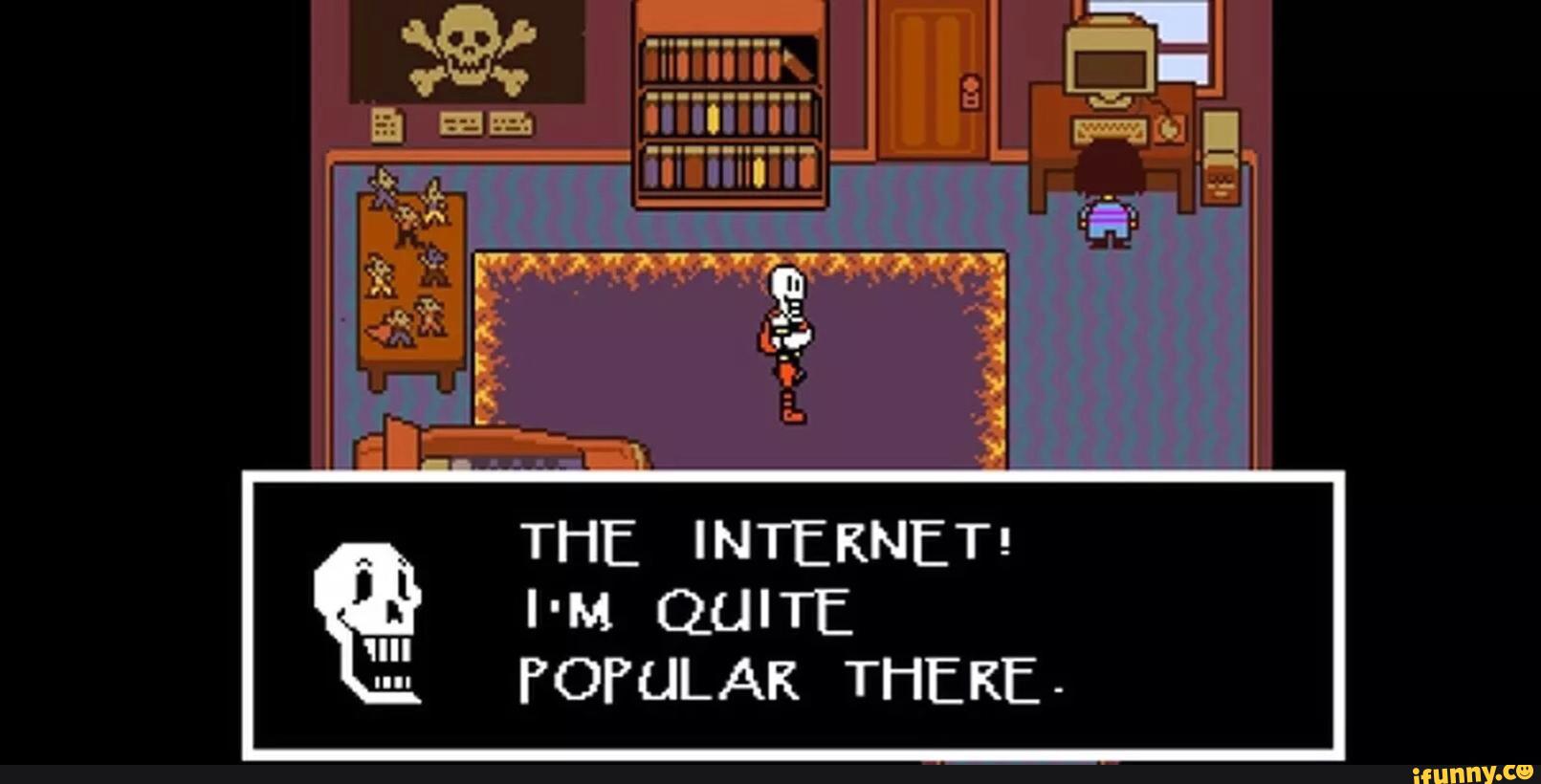 Or a really hilarious skeleton.

(Note: the music is really good too)